Hepatocellular carcinoma (HCC) is a common neoplasm of the estimated 782,000 new cancer cases worldwide (50% in China alone), as well as the third leading cause of death from cancer worldwide with nearly 745,000 deaths in 2012 [1, 2]. Despite the growing prevalence in liver cancer, there is a lack of therapies. Besides physical methods (such as radiation, transplant, and operation), there exists just one authorized treatment, which had been followed by a series of costly defeats and controversial candidate drugs [3]. Meanwhile, liver cancer is fatal in both developed and developing countries, with the 5-year overall survival rate generally lower than 20 % [4], and the ratio of mortality to morbidity is 0.95 [1]. HCC is a devastating disease with disappointing outcomes, so it is a very important and urgent task to discover survival outcome predictors, and to furnish potential targets for personalized therapy.

Since its discovery in the early 1980s, transforming growth factor beta (TGF-β) signaling has been increasingly recognized as a cancer promoter [5, 6]. TGF-β orchestrates a favorable microenvironment for cancer cell growth and progression of the epithelial - mesenchymal transition (EMT) [6] and promotes fibrogenesis [7, 8], suggesting TGF-β stimulates HCC pathogenesis and metastasis. TGF-β signaling inhibitors could hinder HCC cell growth and progression by inhibiting the EMT process in distinct experiment models, leading to the clinical investigation of the TGF-β inhibitor LY2157299 (phase II clinical trial, Identifier: NCT01246986, http://clinicaltrials.gov) [6, 9]. However, whether TGF-β1 expression has the potential to predict HCC prognosis is inconsistent. For example, some articles reported that HCC patients with high TGF-β1 expression showed shorter OS and DFS/PFS [10–12], while some other studies revealed negative findings on OS [13, 14]. There is a need to implement meta-analysis and larger sample evaluation, aiming to systematically elaborate on the prognostic power of TGF-β1 expression in HCC patients.

A total of 1,106 papers were identified by the systematic literature search, where 106 duplicates, 52 reviews, 6 non-English, and 71 non-human studies were excluded and removed, resulting in 868 papers. Further, 856 articles were removed due to relevance, design, and outcome data through the title, abstract, and full-text screening (Figure 2). Ultimately, 12 papers were incorporated into the meta-analysis. 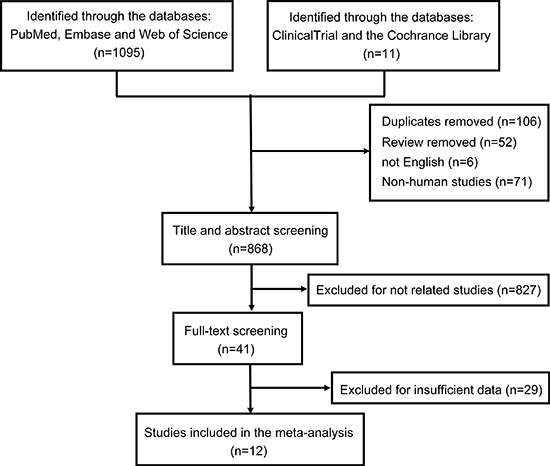 Twelve articles [10–14, 24–30] and our TCGA analysis containing a total of 2,021 individuals were incorporated in the meta-analysis. One of the articles contained two datasets [30], which counted as two studies in our meta-analysis. The principal features of these subjects with TGF-β1 expression were displayed in Table 2. Sample size of the published studies ranged from 67 to 350 patients. Interestingly, all included studies were performed in Asia: ten publications originated from China, one from Japan, and one from Singapore. For specimens, two articles were from urine, three from plasma/serum, and seven from tumor tissue. Additionally, the detection method of TGF-β1 expression included in one by quantitative real-time polymerase chain reaction (qPCR), two by 125I radioimmunoassay kit, three by enzyme linked immunosorbent assay kit (ELISA), and six by immunohistochemistry (IHC). Risk of bias (see quality assessment in methods) was appraised basing on the three categories of NOS, and all 12 articles (100%) were regarded as high quality (7–9 stars) (Table 2).

Table 2: Characteristics of the eligible studies in meta-analysis

—, there is no corresponding data presented.

Figure 3: Meta-analysis of the HRs with 95% CI for OS from univariate analysis in HCC. The size of the blocks or diamonds represents the weight for the random-effect model in the meta-analysis. HR > 1 indicates that high TGF-β1 expression is correlated with a more unfavorable overall survival (OS).

Figure 4: Meta-analysis of the HRs with 95% CI for OS from multivariate analysis in HCC. The size of the blocks or diamonds represents the weight for the random-effect model in the meta-analysis. HR > 1 indicates that high TGF-β1 expression is correlated with a more unfavorable overall survival (OS). 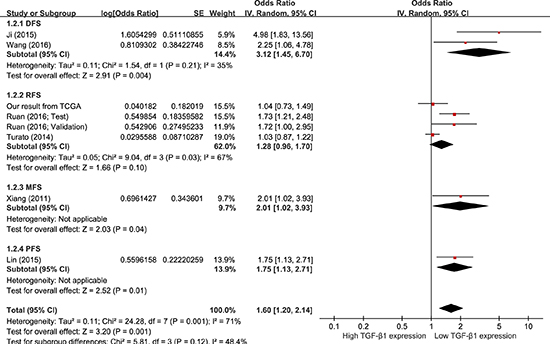 Figure 5: Meta-analysis of the HRs with 95% CI for DFS/RFS/MFS/PFS from univariate analysis in HCC. The size of the blocks or diamonds represents the weight for the random-effect model in the meta-analysis. HR > 1 indicates that high TGF-β1 expression is correlated with a more unfavorable disease-free survival (DFS), relapse-free survival (RFS), metastasis-free survival (MFS), and progression-free survival (PFS).

Publication bias was conducted via RevMan. Although the shape of funnel plots in OS and DFS/RFS/MFS/PFS outcomes did not meet global symmetry (Supplementary Figure 2), random-effect models were used, results were receivable and merit consideration. Furthermore, sensitivity tests were conducted during the meta-analysis, and elimination of any individual study did not alter the overall findings (Supplementary Table 3, Supplementary Table 4).

Subgroup analyses of HRs for OS and DFS/RFS/MFS/PFS among HCC patients in fixed- and random-effect models were carried out on different sample types: tissue, plasma/serum, and urine (Table 3, Table 4). Matching forest plots and funnel plots of sample type subgroups are in Supplementary Figures 3–11.

―, there is no corresponding data presented;

*, Our analysis data from TCGA database, Test and Validation sets of Ruan’s study were acted as three studies here.

―, there is no corresponding data presented;

*, Our analysis data from TCGA database, Test and Validation sets of Ruan’s study were acted as three studies here.

TGF-β1 expression can help primary carcinoma cells migrate and disseminate to distant sites [22–24]. This metastasis contributes to high mortality of hepatocellular carcinoma (HCC) [25–28], which is the third dominating cause of cancer-related deaths worldwide [29–32]. With so many people affected, it is important to study TGF-β1 in the development and progression of HCC. Some meta-analyses have reported that certain TGF-β1 polymorphisms (+869C/T and –509C/T) promote susceptibility to HCC [33–36], but clinical significance and prognostic value of TGF-β1 expression in HCC has remained uncharacterized.

We first analyzed a dataset of 423 HCC patients from TCGA, and found that high TGF-β1 expression could indicate an unfavorable prognosis on OS, but not on RFS. The results were consistent with our meta-analysis on OS. The different clinical effects of high TGF-β1 expression in the same tumor type from different studies may be due to variant cut-off values of TGF-β1 expression between different studies. The complex environment of cancer cells and the duality of TGF-β1 in cancers are other possible causes. TGF-β1 can act as an epithelium (including hepatocellular) cellular proliferative depressor, a tumor accelerator, or both, depending on the cell environment [37, 38].

Although there was a certain but acceptable heterogeneity in OS and DFS/RFS/PFS studies, the outcomes of meta-analysis still deserve to be considered. Several reasons could have contributed to the heterogeneity, including the constituent ratio of patients’ age, detection method, and a diverse source of samples in each study. For example, samples in two articles were from urine [16, 20], three from plasma/serum [10, 13, 17], and seven from tumor tissue [11, 12, 14, 15, 18, 19, 21]. Secondly, there were variable definitions of the cut-off value among these publications. No relevant studies to investigate the uniform criterion of TGF-β1 positive or high expression, which could be an important source of potential bias. Thirdly, all the incorporated publications were completely implemented in Asia. Lastly, the original individual information of HCC patients was not available for all studies, which also likely led to the heterogeneity of our analysis.

Some limitations existed in our study. All the studies were from Asia, which possibly resulted in regional bias. The articles incorporated into our analyses were all published in English, so the language bias appeared. Selective reporting was observed in some publications, which led to the loss of some meritorious data. For example, the pooled HRs for DFS/RFS/MFS/PFS were displayed in fewer studies compared to HRs for OS. The HRs that were evaluated indirectly might be less reliable than those acquired directly from published data. Finally, if these studies could have provided patients’ individual information, our meta-analysis would have been much more precise.

An independent dataset including information on mRNA expression and clinical features of HCC patients (n = 423 for TCGA liver hepatocellular carcinoma, gene expression by RNAseq with IlluminaHiSeq) was obtained from the UCSC Cancer Genomics Browser of TCGA (https://genome-cancer.soe.ucsc.edu). We analyzed the differences of clinicopathologic variables between two groups: high TGF-β1 expression and low TGF-β1 expression. We also evaluated the prognostic influence of TGF-β1 expression on OS and RFS in this HCC cohort.

Differences between the clinicopathological data of higher TGF-β1 expression and lower TGF-β1 expression was assessed by the Chi-squared test. For survival analysis, OS was calculated from the day of diagnosis to the day of death or last follow-up, while RFS was defined as the time from the day of the first complete remission to the day of first relapse or death [39–42]. Survival curves were established using the Kaplan-Meier approach, with log-rank tests applied to appraise the differences between the groups. Hazard ratios (HRs) were produced using COX’s proportional hazards model. COX Univariate and multivariate models for the prognostic effect of TGF-β1 expression on OS/RFS in HCC patients from the TCGA were analyzed. SPSS 17.0 software (IBM, Chicago, USA) was applied to conduct statistical analysis, and a two-sided p-value < 0.05 was regarded as statistical significance. All survival-related figures were plotted in GraphPad Prism 5 (GraphPad, La Jolla, USA).

No related review protocol has existed or been registered. Inclusion criteria: (1) studies were full papers in English prior to February 10, 2017; (2) Original articles as cohort studies; (3) Patients were grouped in terms of the expression levels of TGF-β1; (4) Focused on prognostic effect of TGF-β1 expression on patients with liver cancer; (5) Offered data on survival including OS and/or DFS/RFS/MFS/PFS. Exclusion criteria: (1) Duplicate publications; (2) Conference abstracts, meta-analysis, reviews, letters, comments, expert opinions and case reports; (3) Being not yet published in English; (4) Non-human experiments; (5) Studies without qualified data. Repetitive literature was managed and removed by Endnote X4.

The methodological quality of included literature was appraised via the Newcastle-Ottawa Scale (NOS) [45]. The NOS is composed of three dimensions: selection, comparability, and exposure or outcome. Up to 4, 2, and 3 stars are given for the three dimensions respectively, with a total maximum score of 9 stars. Using the NOS, the quality of these studies was classified into three tiers: high quality (7–9 stars), intermediate quality (4–6 stars), and low quality (1–3 stars) [45–47].

Meta-analysis was conducted with Review Manager (RevMan) software (version 5.3.5; the Nordic Cochrane Centre, Copenhagen, Denmark). The prognostic role of TGF-β1 expression on OS and/or DFS/RFS/MFS/PFS was assessed by the pooled HRs and their matching 95% CI with the inverse variance method. Statistical heterogeneity was assessed by the chi-squared test (the significance of heterogeneity was artificially expressed as p’-value to distinguish from the significance of outcomes) and I2 statistics. When there was no significant heterogeneity (p’-value > 0.1 and I2 < 50%), the pooled HRs were assessed by fixed-effect models. Otherwise, random-effect models were utilized to enhance the stability of the meta-analysis by providing a conservative standard error and wider confidence interval. Publication bias was appraised by Begg funnel plot and Egger’s test.

This work was supported by the Open-End Fund for the Valuable and Precision Instruments of Central South University (CSUZC201746), Hunan Provincial Innovation Foundation for Postgraduates (CX2016B056), Fundamental Research Funds for the Central Universities of Central South University (2015zzts096), and the Science and Technology Department Research Foundation of Hunan province (12JJ2052). We all thank the TCGA project team for the mass available data.