This study was designed to explore differences in the ultrasonographic characteristics of medullary thyroid carcinoma (MTC) and papillary thyroid carcinoma (PTC). This study included 35 cases of MTC and 96 cases of PTC that were surgically and pathologically confirmed. Preoperative ultrasound images were retrospectively reviewed by two physicians (with 5 years’ experience in thyroid ultrasound) under the premise of unknown pathological results. Various ultrasonic features of nodules were assessed objectively. The clinical features of components were determined by other physicians. Age, sex, unilateral or bilateral involvement of thyroid gland, lesion size, margin, shape, echogenicity, calcification, intranodular blood flow, cervical lymph node, and tumor node metastasis (TNM) stage were compared between MTC and PTC groups. Age, sex, involvement of the thyroid gland, margin, and calcification were similar for the MTC and PTC groups. Compared with the PTC group, the lesion size in the MTC group was significantly larger (P < 0.001). A taller-than-wide shape (aspect ratio > 1) was significantly less likely in the MTC group than the PTC group (P < 0.001). A mixed echogenicity was significantly more common in the MTC group than the PTC group (P = 0.003). The MTC group had significantly enhanced intranodular blood flow (P < 0.001). The TNM stage of the MTC group was significantly higher than that of PTC group (P = 0.001). Medullary thyroid carcinomas differ significantly from PTCs in lesion size, shape, echogenicity, and intranodular blood flow.

Medullary thyroid carcinoma (MTC) originates from calcitonin-secreting parafollicular cells of the thyroid and accounts for 3.5-10% of all thyroid malignancies. Medullary thyroid carcinoma is characterized by early lymphatic metastatic spread and accounts for 13% of all thyroid cancer-related deaths [1]. Both sporadic and hereditary forms of MTC exist [2]. Hereditary MTC is an autosomal dominant genetic disease with the RET mutation of the proto-oncogene [3] and is a subtype of multiple endocrine neoplasia type 2 (MEN 2). Other subtypes of MEN2 include MEN2A (MTC combined with pheochromocytoma and hyperparathyroidism) and MEN2B (MTC combined with pheochromocytoma, multiple mucosal neuroma, and Marfan syndrome). Patients with only a family history of MTC are described as having familial medullary thyroid carcinoma [4]. Medullary thyroid carcinoma shows early lymph node metastases, aggressive invasion of the surrounding vital organs, insensitivity to radiation therapy and chemotherapy, and poor prognosis. Unilateral or bilateral thyroid tumors are the most common clinical features.

Treatment of cancer is comprehensive and based on surgery, mainly including preoperative evaluation, surgical selection, and lymph node dissection. Hereditary MTC has a higher proportion of multifocal lesions than sporadic MTC, so patients with hereditary medullary thyroid carcinoma undergo bilateral thyroidectomy as a matter of course. Early detection and preventive surgery are very important in the treatment of MTC. Most research has focused on the sonographic features of papillary thyroid carcinomas (PTCs), which account for more than 70% of all malignant thyroid tumors [5-8]. Compared with benign nodules, MTC and PTC show malignant nodule features, including ill-defined margin, irregular shape, hypoechoic echogenicity, solid nodules, and calcification (mainly microcalcifications) [9].

To our knowledge, only a few studies have compared ultrasonic features of MTC and PTC to date [10, 11]. Postoperative stages were judged by pathological specimens using the sixth edition of thyroid cancer staging criteria published by the Union for International Cancer Control [12]. Detection of RET gene mutation is routinely recommended for all patients with MTC and their first-degree relatives. However, detection of RET gene mutation has only been performed for a few patients in the biological chip center of Yantai Yuhuangding hospital, owing to the cost of this test, which is not covered by medical insurance. Although some cases of MTC can be assessed initially through family history and biochemical indicators, doctors must evaluate the nodules by ultrasonography under conditions of unknown clinical information. Kim et al. [11] indicate that lesion shape, as determined by ultrasonography, is different between MTC and PTC. Lee et al. [10] show that lesion size, cystic changes, and echogenicity are different between MTC and PTC. In this study, we collected clinical and ultrasonic data from northern Chinese mainland residents, and compared patients’ age and sex, unilateral or bilateral involvement of the thyroid gland, abnormal cervical lymph node, intranodular blood flow, and TNM stage.

All 35 MTC patients and 96 PTC patients were surgically and pathologically confirmed at Yantai Yuhuangding hospital. Of 35 MTC patients, 27 (77.1%) were sporadic; one of the sporadic MTC cases also had minor PTC. The remaining eight cases (22.9%) were hereditary. Seven of the hereditary MTC cases were MEN 2A or MEN 2B; one case was familial medullary thyroid carcinoma. Comparisons of age, sex, glands involvement, and TNM stage are shown in Table 1. The general situation of the two groups in age (P = 0.399), sex (P = 0.126), gland involvement (single and double) (P = 0.109) showed no statistical significance difference. The TNM stage of the MTC group was significantly higher than that of the PTC group (P = 0.001) (Table 1). Preoperative serological test results of some of the MTC patients are shown in Table 2.

Table 1: Comparative analysis of the clinical characteristics of MTC and PTC patients. 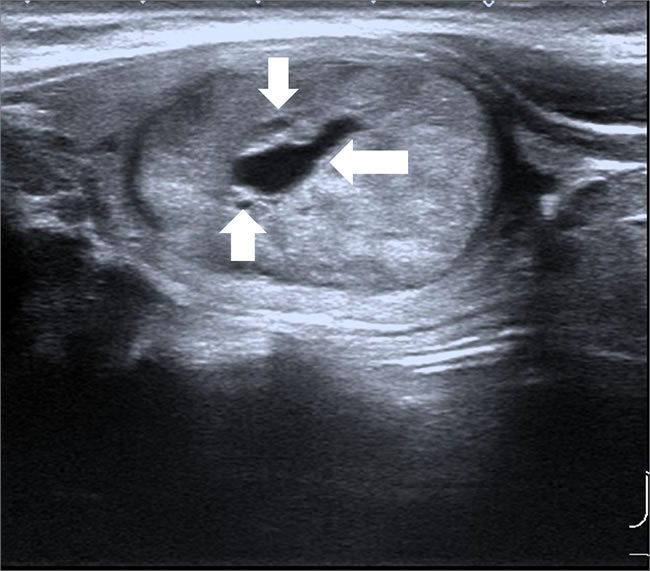 Table 3: Comparative analysis of ultrasound characteristics of MTC and PTC. 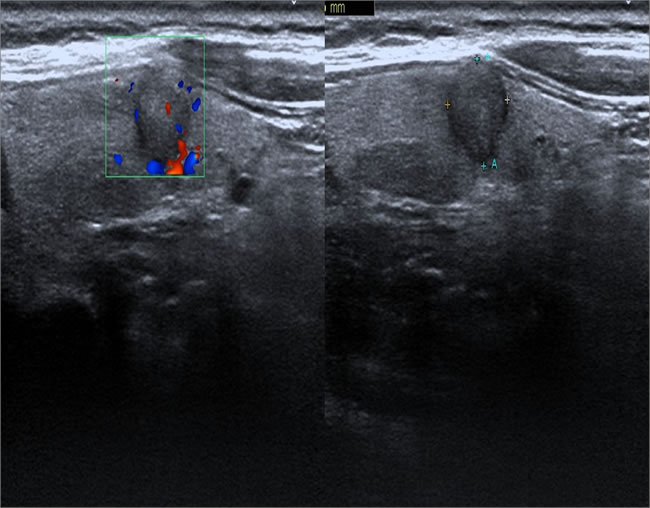 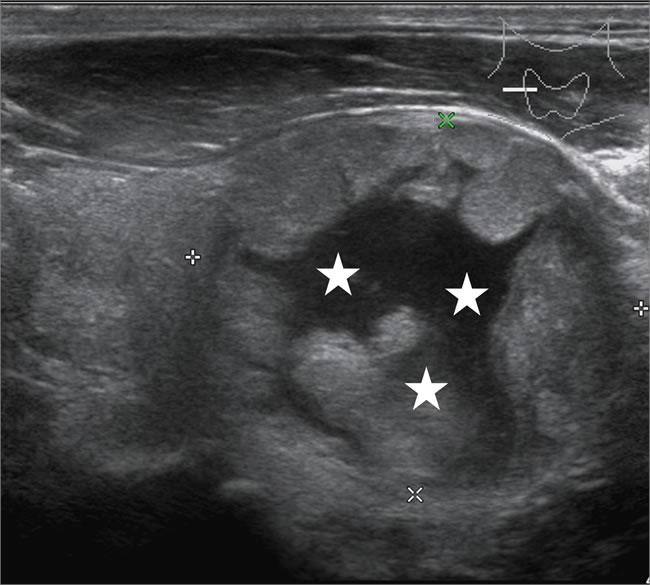 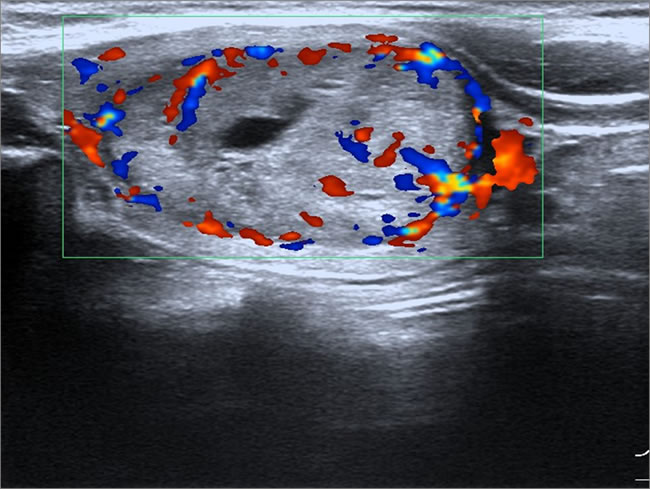 Our study indicates that there is no significant difference in age, sex, unilateral, or bilateral thyroid gland involvement and calcification between the MTC and PTC groups. However, the MTC group significantly differs from the PTC group in lesion size, shape, echogenicity, and blood flow. Moreover, serum calcitonin and carcino-embryonic antigen tests can be used for MTC screening.

Woliński et al. [15] indicate that MTC occurs in older patients ( > 50 years), is more common in women than men, and is typically sporadic. In our study, the mean age of the 35 MTC patients was 46.2 ± 11.5 years; the group comprised 19 men and 16 women. Seven of the patients with MTC reported at the clinic with paroxysmal headache, intermittent abdominal pain with headache, pallor, palpitations, and high blood pressure. One of the patients with MTC reported at the clinic because of a family history of MTC. Therefore, sex, age, MEN family history, and clinical symptoms are not reliable for MTC screening. From the lesion margin aspect, most studies [11, 16] show that MTC has a well-defined margin, in comparison with PTC. However, our findings show that there is no significant difference between these two groups.

In our study, about half the lesions in MTC and PTC groups had visible microcalcifications, and there was no significant difference between these two groups (P = 0.488). Most of the lesions in the MTC group had enhanced blood flow signals (40/44, 90.9%), which was significantly higher than for the PTC group (47/119, 39.5%, P < 0.001). Saller et al. [19] suggest that grayscale ultrasound is an important means of thyroid nodule examination, and state that detection of intranodular blood flow by color Doppler sonography provides no additional information for the diagnosis of MTC or other malignant nodules. The intensity of ultrasonic blood flow signals is related to a variety of factors, such as tumor size and tumor-specific pathological type. Foschini et al. [20] found that the vascular composition of MTC is similar to that of the differentiated mast cell tumors, in which the peripheral blood vessels invade and differentiate into smaller vessels.

In conclusion, there is no statistical difference in sex, age, or unilateral or bilateral thyroid gland involvement between MTC and PTC groups in our study. Both MTC and PTC have the common ultrasound characteristic of malignant nodules, including ill-defined margin, hypoechoic echogenicity, microcalcifications, and cervical lymph node abnormalities. However, there were significant differences in lesion size, shape, echogenicity, and blood flow signal between the MTC and PTC groups. The TNM stage of the MTC group was significantly higher than that of the PTC group. Compared with the PTC group, the lesions in MTC groups were significantly larger; in addition, there were fewer lesions with an aspect ratio > 1, more cystic changes, and enhanced blood flow. In addition, serum calcitonin and carcino-embryonic antigen tests are important in the diagnosis of MTC, which can be combined with genetic testing if necessary.

High-resolution ultrasound examinations of the thyroid were performed in all patients with GELogiq9 (New York), GEE8 (Seoul, Korea), or Philips IU22 (New York) scanners equipped with a 5-12 MHz linear array transducer. The settings were set for thyroid or superficial organ examination and the color gain was adjusted to minimize background noise. All ultrasound examinations were performed by radiologists with more than 5 years of experience in thyroid imaging. Each patient’s age and sex were recorded before examination. Each patient was in a supine position during examination.

Echogenicity was defined as markedly hypoechoic (equal to or less than the strap muscle echogenicity), hypoechoic (ranging between the strap muscle and the thyroid echogenicity), isoechoic (equal to the thyroid echogenicity), or hyperechoic (greater than the thyroid echogenicity). Lesions containing cystic change were defined as showing mixed echogenicity. The margins were recorded as well-defined or ill-defined. The aspect ratio was recorded as either > 1 (the anteroposterior dimension was longer than the transverse diameter) or < 1 (the anteroposterior dimension was less than the transverse diameter), according to the ultrasound description. Calcifications were defined as macrocalcifications (large bright spots, larger than 2 mm in diameter, presence of acoustic shadowing) or microcalcifications (multiple punctuate bright spots, less than 2 mm in diameter, hyperechogenicities, absence of acoustic shadowing). If macrocalcifications coexisted with microcalcifications, these were classified as microcalcifications. The intranodular blood flow was recorded as “no blood flow signal,” “visible blood flow,” or “enhanced blood flow signal.” With reference to Koike et al. [24], rich blood flow of color Doppler manifestation of thyroid nodules was identified as rod-like, strip shaped, penetration of color Doppler signals, or more than five points of blood flow signals within the nodule. Abnormal cervical lymph node was diagnosed if the short axis diameter was > 0.5 cm with disappearance of hyperechoic structure, accompanied by any of the following signs: uneven internal echogenicity, irregular blood flow, calcification, or cystic changes.