According to the Global Cancer Statistics 2012, gastric cancer (GC) presents an enormous public health problem as the third most common cause of cancer death in males and the fifth in females, with approximately 1 million new cases and 723,100 deaths each year worldwide [1]. Considering the increasing trend in the incidence of GC and the high fatality, finding novel strategies to prevent this disease is an urgent need. An increasing number of studies have focused on dietary factors [2-5]. However, the associations between red and processed meat consumption and GC risk have remained inconclusive. Some studies have shown positive associations [6, 7] but others have provided null results [8, 9]. Additionally, there was insufficient evidence for subtype of GC (GCA: gastric cardia adenocarcinoma and GNCA: gastric non-cardiac adenocarcinoma). Thus, in consideration of the large burden of GC worldwide and the controversial evidence, we conducted a systematic review and meta-analysis with the following objectives: (1) to provide an update based on more sufficient evidence and a quantitative synthesis of the eligible data on the associations between red and processed meat consumption and the risk of GC; and (2) to provide more detailed evidence according to subtype analyses; and (3) to evaluate the dose-response association between red and processed meat consumption and GC risk. 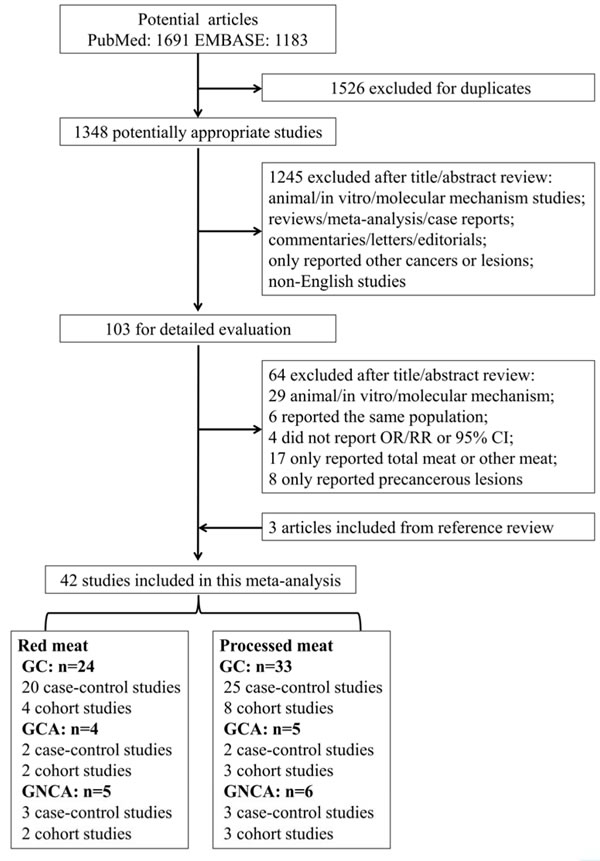 Figure 1: Flowchart of the process for the identification of relevant studies. 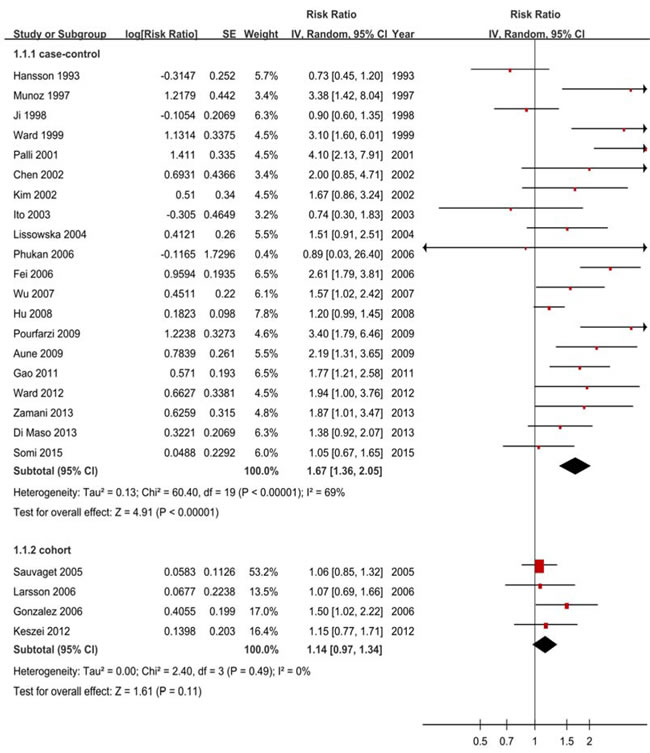 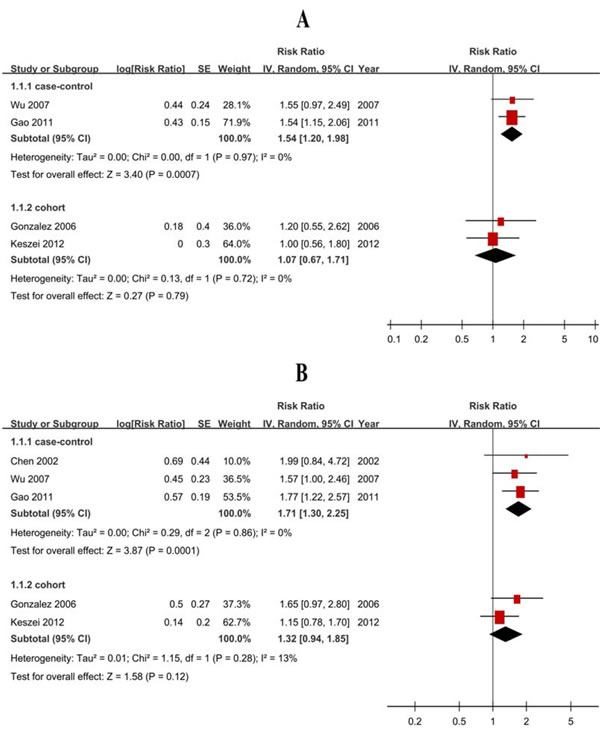 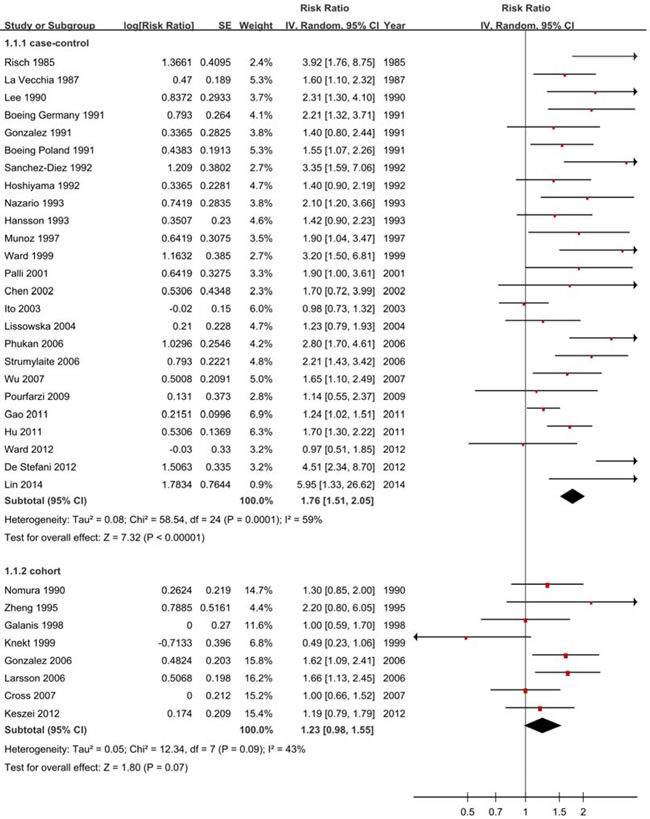 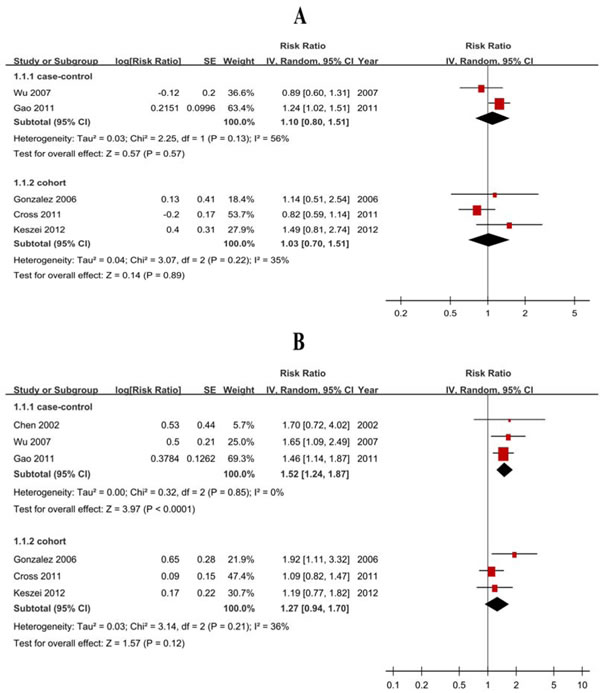 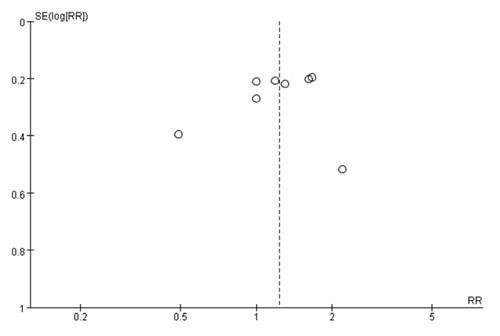 Several potential mechanisms may contribute to the effects. First, the positive results in the case-control studies may be biologically plausible. When cooked at high temperature for a long time, red and processed meat is a major source of carcinogens, including polycyclic aromatic hydrocarbons, heterocyclic amines and N-nitroso compounds, which may play important roles in the development of GC [13-15]. Second, a high iron intake associated with red and processed meat consumption may also play a role in GC by causing oxidative damage and involving the endogenous formation of carcinogenic N-nitroso compounds . Third, positive associations have been reported to be due to genetical differences [18]. Finally, bacteriological evidence has found possible mechanisms that explain the positive associations to a certain extent. Helicobacter pylori (H. pylori) has been deemed to be a significant risk factor of GC and has been classified as a type 1 carcinogen for humans by the International Agency for Research on Cancer (IARC) and the World Health Organization (WHO) [19]. Heme iron from red and processed meat may play an important role in GC risk by causing oxidative damage, which is considered to be an essential growth factor for H. pylori [16]. Nevertheless, the results of many cohort studies and meta-analyses do not support these explanations. For example, although consumption of red and processed was considered to be a risk factor for carcinogenesis, our previous findings did not support positive associations in some precancerous lesions [20] or cancer [21]. Furthermore, several large prospective investigations into cancer and nutrition suggested no potential association between higher consumption of red and processed meat and the risk of GC [8, 22]. Additionally, although studies showed positive associations between red meat consumption and gastrointestinal cancer, the definition of red meat included processed red meat, which may have contributed to the positive associations partly of red meat consumption [13, 23]. Thus, further studies are needed to verify these potential mechanisms.

Our study has several strengths. The first strength is that we presented separate analyses according to study design and the subtypes of three cancers. These independent analyses provided detailed data and increased the power of the meta-analysis, which further strengthened the conclusion. Our analysis is based on a substantial sample size and a quantitative synthesis of the eligible data. These data provided sufficient reliable, robust and current evidence and increased the statistical power of the analysis. We broadly and systematically reviewed databases for all investigations of red and processed meat consumption and GC risk from database inception through October 2016, identifying all major published studies. The study selection and data extraction were performed independently and in duplicate by two investigators, which increased the validity of the results. Additionally, studies were identified from 19 countries or regions in the Americas, Europe and Asia, which increased the generalizability. Furthermore dose-response analyses were conducted to assess these associations rather than simply performing categorical comparisons.

However, the limitations of the present meta-analysis should be taken into consideration. First, the included studies were observational, and residual confounding and unmeasured factors cannot be excluded. Nevertheless, most included studies were adjusted for potential confounders, including sex, age, energy intake, body mass index, physical activity, smoking and alcohol use. Yet, information on some of the major confounders could still not be obtained from some of the studies. In particular, most of the included studies in relation to GC lacked information concerning H pylori infection. Only two studies adjusted the results modified by H pylori infection. Thus, the parts of the results should be considered with caution due to possible confounding.

Second, significant heterogeneity was observed in the included studies, which may be related to the publication year, number of cases, geographic region, method of exposure measurement, quality score and the different consumption levels of red and processed meat in studies. Nevertheless, heterogeneity was observed mainly in case-control studies and no statistically high heterogeneity was found in cohort studies. Due to many case-control studies providing exposure information obtained after the cancer diagnosis, which may be subject to inaccurate measurement of dietary intake and recall bias. Thus, the results of retrospective studies should not be overemphasized, and the results of prospective studies may be more powerful than retrospective studies. Additionally, we used random-effects models to account for heterogeneity.

Third, the results of the present study may have been influenced by publication bias. Indeed, Tests of publication or small study bias were not conducted due to the small number of cohort studies for several analyses and the corresponding results should be carefully interpreted.

Finally, we did not perform a subtype analysis of red and processed meat (e.g., beef, pork, mutton, bacon, ham and sausage). Our study did not investigate the associations of GC risk with other dietary factors, such as meat cooking techniques and heme iron from meat.

We searched PubMed and EMBASE for studies published from inception through October 2016. The following search terms were used: “meat/meats”, “beef”, “veal”, “pork”, “lamb”, “mutton”, “ham”, “bacon”, “sausage”, “salami”, “hot dogs”, “diet/dietary” and “food/foods” in combination with “gastrointestinal/digestive/alimentary tract/gastric/stomach”, “neoplasia/cancer/carcinoma/adenocarcinoma”. The reference lists of the included studies were also searched manually to identify additional literature. The two sets of keywords were combined individually, and the eligibility criteria were independently judged by two authors (ZZ and ZY).

The subtypes of gastric cancer

The Newcastle-Ottawa Scale (NOS) was used to assess the study quality of included studies [10]. The NOS is judged on three factors including the elucidation of the exposure or outcomes of interest for case-control or cohort studies, the selection of the study populations and the comparability of the populations. Two researchers (ZZ and ZY) independently assessed the quality of the studies, and discrepancies in interpretation were resolved by a consensus decision made by the third researcher (QZ). The range of NOS is 0-9 stars and a high quality study includes 7 or more stars.

Publication bias was assessed using funnel plots, Begg’s test and Egger’s test (P < 0.1 was considered significant publication bias). The sensitivity analysis was conducted to investigate the influence of a specific study on the pooled risk estimate by removing one study in each round.

There is no conflict of interest for each author.

This study was funded by the National Science Foundation of China (No.81370564).

10. Stang A. Critical evaluation of the Newcastle-Ottawa scale for the assessment of the quality of nonrandomized studies in meta-analyses. EUR J EPIDEMIOL. 2010; 25:603-605.