The microRNA-200 (miR-200) family consists of five members in two clusters, miR-200c/141 and miR-200b/a/429, which likely target different, but sometimes overlapping genes, thereby regulating many biological processes as oncomiRs or tumor suppressors [1, 2]. Individual miR-200 family member target genes appear to be cancer type- and context-dependent [3]. In many cancers, miR-200 member expression status serves as a surrogate marker for metastasis, response to drug treatments, and patient outcomes [4–9]. miR-200c overexpression predicts poor outcome in patients with hormone receptor-negative breast cancer [9]. miR-141 overexpression is observed in metastatic cases and is associated with poor outcome in breast cancer (BC) patients [10, 11]. Despite advances in our understanding of BC-related miR-200 members, their precise roles in breast cancer cell (BCC) metastasis are largely unknown, in part because each miR-200 has several putative targets with disparate functions. The underlying mechanisms by which miR-200 overexpression promotes metastasis require further study, and genes that serve as intermediaries in miR-200-associated metastasis are yet be identified.

The purpose of this study was to clarify whether SerpinB2 is involved in metastasis promoted by miR-200c/141 cluster overexpression in mouse xenograft models. Additionally, we investigated whether SerpinB2 expression is associated with patient clinicopathological features and outcomes using primary BC tissues and The Cancer Genome Atlas (TCGA) data. 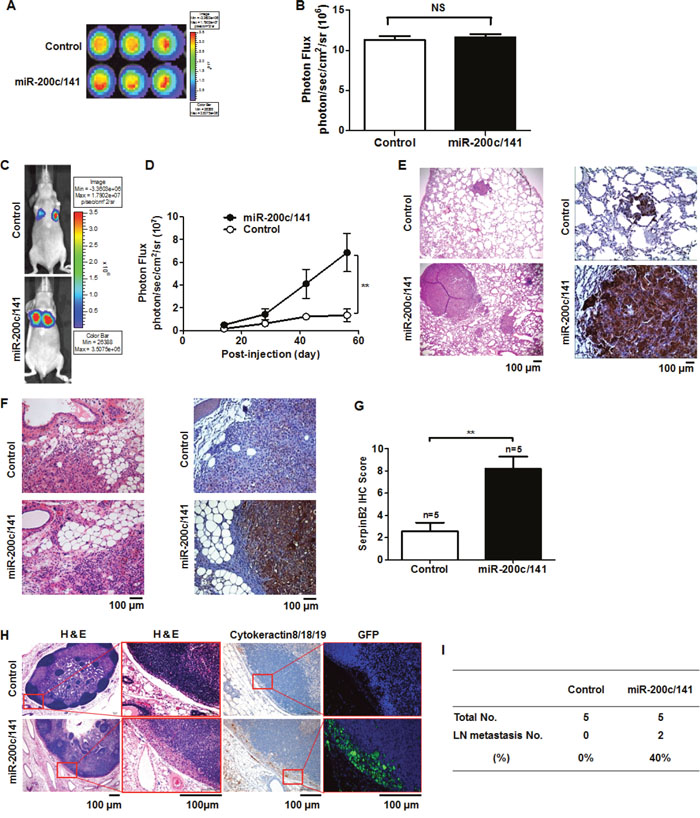 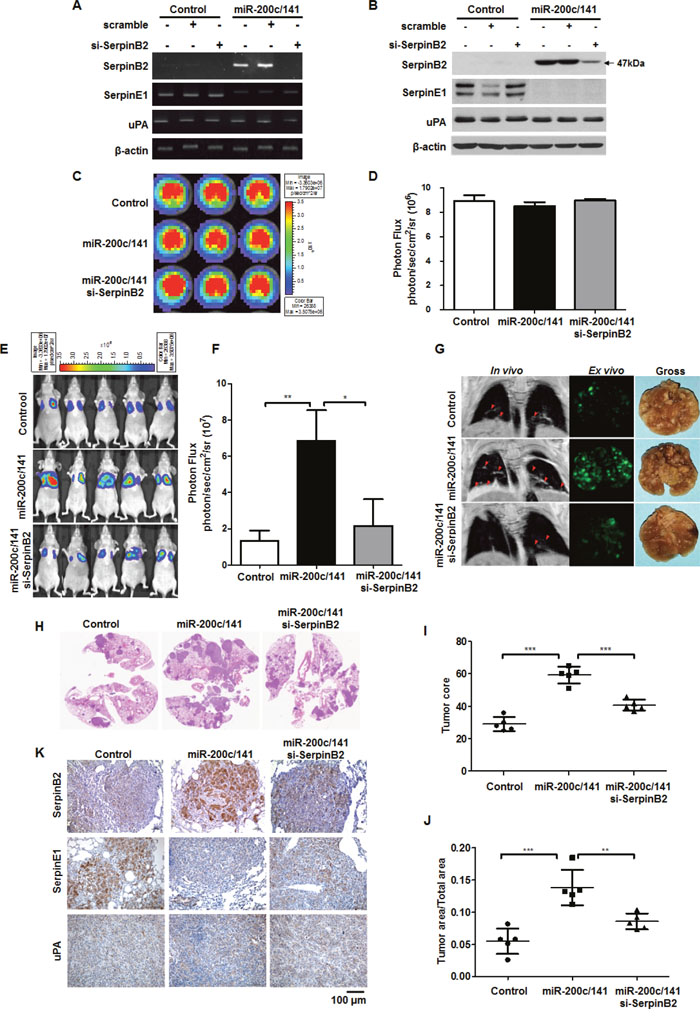 Table 1: Correlation between SerpinB2 overexpression and BC clinical parameters 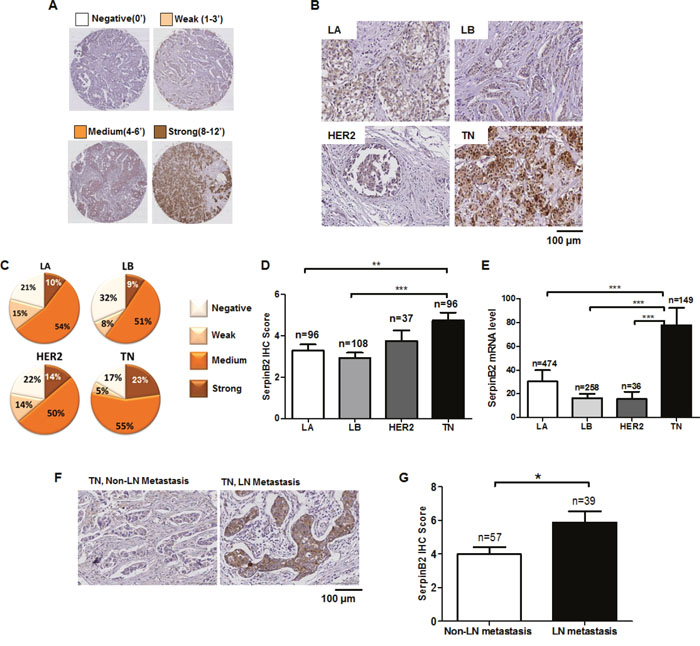 High SerpinB2 expression was observed in the TN subtype with LN metastasis, but SerpinB2 was only rarely detected (and at low levels) in the TN subtype without LN metastasis (Figures 4F and 4G). In xenografts and TN patient tumor samples, high SerpinB2 expression was also observed in macrophages and fibroblasts in adjacent stromal tissue (Supplementary Figure 5). MDA-MB-231miR-200c/141 cell xenograft tumors displayed extensive macrophage infiltration (stained with F4/80 as a pan macrophage marker) into lung tissues, and SerpinB2 knockdown decreased macrophage infiltration into these tumors (Supplementary Figure 6).

SerpinE1 and uPA levels are the same in LA, LB, HER2, and TN subtypes 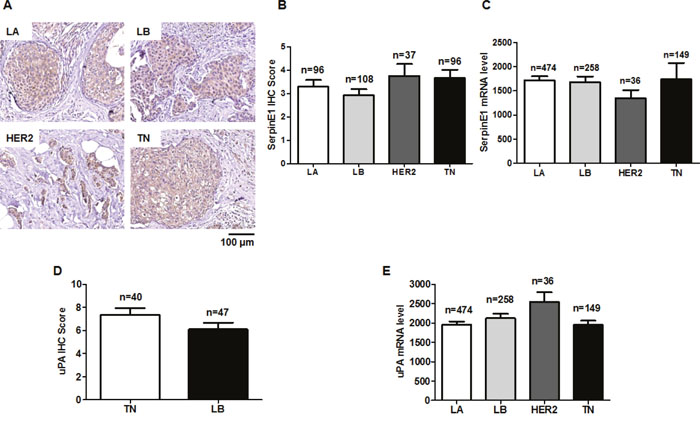 Figure 6: SerpinB2 overexpression is associated with unfavorable BC patient survival outcomes. OS analysis by high or low SerpinB2 protein level in patient primary tumors (A) OS analysis in high and low SerpinB2-expressing cases in patients with (B) or without (C) LN metastasis.

The c-Jun, c-Fos and FosB which are SerpinB2 transcription factors [28] increased in MDA-MB-231miR-200c/141 cells compared to control. miR-124a and miR-26b which are able to target SepinB2 [29] decreased in MDA-MB-231miR-200c/141 cells compared to control. miRNAs have the capability of activating gene expression through post-transcriptional regulation for example, increased mRNA stability and miRNA-mediated decoy [30]. There is, as yet, no report of underlying mechanism by which miR-200c/141 increase c-Jun, c-Fos, and FosB or decrease miR-124a and miR-26b. Del Vecchio G et al. reported that miR-200a could increases the c-Jun amount through a microRNA-mediated stabilization of its mRNA [31]. A common mechanism for miR-124 downregulation is the methylation of the promoter region of its gene through transcriptional regulators [32]. We speculate that miR200c/141 may involve in posttranscriptional regulation for upregulation of c-Jun and c-Fos via miRNA-mediated mRNA stability and miRNA-mediated decoy. Decreases of miR-124a and miR-26b in MDA-MB-231miR-200c/141 cells may be due to the overexpression of genes to regulate hypermethylation. We will further investigate underlying mechanisms by which miR-200c/141 increases c-Jun and c-Fos and decreases miR-124a and miR-26b.

Overexpression of plasminogen activation system members, including uPA, SerpinE1 and SerpinB2, is associated with malignancy, tumor progression, and metastasis [17, 19]. SerpinB2 inhibition of uPA in tumors is of significant interest in prognosis and clinical outcome prediction in various cancers [16, 20, 21, 36]. Although others have explored the prognostic value of SerpinB2 in BC patients, the status of SerpinB2 from tumor extracts was evaluated using RT-PCR and immunoenzymatic assays, which do not discriminate between cancer and stromal cells that also express SerpinB2 [16, 20, 36–40]. However, IHC analysis can reveal specific SerpinB2 locations in tumor tissues. The present study incorporated TCGA datasets, the University of North Carolina’s RNASeqV2, and IHC score analysis for SerpinE1, SerpinB2 and uPA. We observed high SerpinB2 levels in TNBC relative to other BC subtypes, and SerpinE1 and uPA levels differed between LA, LB, HER2, and TN subtypes. Additionally, SerpinB2 expression was higher in primary tumors with LN metastasis than in non-LN metastasis cases, indicating that high SerpinB2 status may be a prognostic factor for predicting LN metastasis.

Bouchet, et al. and Foekens, et al. suggest that SerpinB2 overexpression may be a marker for prolonged survival in BC patients with low uPA and SerpinE1 levels [26, 36]. They evaluated SerpinB2 levels from primary tumor lysates using immunoenzymatic assays, which do not reflect the expression site of SerpinB2 in tumor cells. In contrast to these studies, our IHC results showed that high levels of SerpinB2 in cancer cells within the primary tumor tissue were associated with reduced OS for all BC patients. In our study, tumor cells overexpressing SerpinB2 did not display SerpinE1 or uPA downregulation. Our results suggest SerpinB2 overexpression in BCCs with concomitant SerpinEl or uPA expression might contribute to poor prognosis and unfavorable clinical outcomes. Univariate analysis confirmed that a poor outcome was associated with SerpinB2 status, HER2, TNM stage, and LN metastasis in all BC patients. In multivariate analysis, SerpinB2 is not independent prognostic factor, but contribute to LN status or HER2 expression associated with poor outcome.

In conclusion, SerpinB2 upregulation was shown to be involved in miR-200c/141 cluster-promoted lung and LN metastasis in BC xenograft models. In patient tumor samples, higher SerpinB2 levels were detected in TNBC as compared to other BC subtypes, and were associated with LN metastasis and reduced survival. Taken together, our findings provide new insights into the role of SerpinB2, which was upregulated by miR-200c/141 overexpression, in promoting BCC lung and LN metastasis, and suggest that SerpinB2 could be used to assess metastasis risk in BC patients.

All animal experiments were approved by the Seoul National University Hospital Biomedical Research Institute Animal Care and Use Committee (IACUC). A total of 28 female BALB/c nude mice were used. Orthotopic xenografts were established via injection of 1×106 MDA-MB-231miR-200c/141 (n=5) or control cells (n=5) into the fat pad of the 4th mammary gland of 5-week old mice. To investigate lung metastasis, 5×105 cells transfected additionally with SerpinB2 or scramble siRNA were suspended in 0.1 ml of PBS and injected into the tail vein of 6-week old mice. Tumor-bearing mice were randomly assigned to one of three groups: MDA-MB-231 (n=6); MDA-MB-231miR-200c/141 (n=6); and MDA-MB-231miR-200c/141+si-SerpinB2 (n=6).

BLI was conducted using the IVIS luminal II system (Caliper Life Sciences, Hopkinton, MA, USA) with living image acquisition and analysis software. After administration of D-luciferin (150 μg/ml), bioluminescent signal in 1×103 to 1×105 cells per well was quantified. Mice were intraperitoneally injected with D-luciferin (150 mg/kg). BLI of mice was performed weekly post-injection, and the bioluminescent signal of the thorax area was quantified.

A total of 480 tissue microarrays of primary tumors in patients who were not treated before surgery, along with medical records, were collected from Outdo Biotech Co. Ltd. (Shanghai, China) between Aug 2004 and Dec 2008. BC subtypes were defined as luminal A (LA, n=96), luminal B (LB, n=108), HER2 (n=37) and TN (n=96), regarding ER, PR and HER2 status. Follow-up survival data collected from 143 patients for more than 10 years were used. The follow-up deadline was Jul 2014, at which point 42 patients had died, and 101 remained alive. Survival time was counted from the date of surgery to the follow-up deadline or date of death (all patients eventually died of cancer recurrence or metastasis). Total RNAs were isolated from breast cancer tissue of 21 patients with TNBC and real-time RT-PCR was performed to analyze miR-200c, miR-141 and SerpinB2 mRNA. The Institutional Review Board (IRB) of Seoul National University Hospital (IRB No. 1604-063-754 and 1608-131-787) reviewed and approved the study protocol, and exempted the study from the obligation to obtain informed consent. This study was performed in observance of the World Medical Association’s Declaration of Helsinki.

For both in vitro and in vivo data, means ± standard deviations were calculated from at least five independent experiments and statistical analysis of data was performed using analysis of variance (ANOVA) and Student-Newman-Keuls test. For clinical data analysis, the Chi-square test was used to compare baseline characteristic distributions among groups. Survival analyses were performed using the Kaplan Meier method. Cox proportional hazard regression models were used to estimate hazard ratios (HR) with 95% confidence intervals (CI). A multivariate Cox regression model was fitted based on all characteristics that had P≤0.10 in the univariate analysis. For all tests, a P<0.05 was considered significant.

The authors would like to thank Dr. Gregory J. Goodall at the University of Adelaide for providing two viral vectors containing miR-141/200c cluster constructs and GFP.

This work was supported by a National Research Foundation of Korea (NRF) grant funded by the Korean government (MEST) (2015R1A2A1A05001860). T.J. and S.K.C. are the awardees of a postdoctoral and graduate student fellowship, respectively, funded by Brain Korea 21 Plus (BK21 Plus).