In 2012, there were 455 800 new esophageal cancer (EC) cases and 400 200 deaths worldwide, especially in developing countries [1]. In high-risk region, including some Asian countries, esophageal squamous cell carcinoma (ESCC) were responsible for 90% of all cases with a significant increasing incidence rate [2]. According to the National Comprehensive Cancer Network (NCCN) guideline of ESCC (version 2, 2016), esophageal resection should be considered for all physiologically fit patients with resectable esophageal cancer [3]. Surgical treatment is still the recommended curative option in ESCC patients considering multiple anti-tumor modalities, unless contraindications exist. Nevertheless, the 5-year overall survival (OS) remains only 26.2% to 49.4% after surgery [4]. Therefore, there is an urgent need for verifying effective biomarkers to predict prognosis of ESCC patients after surgery.

Clinicopathological characteristics for 214 esophageal squamous carcinoma patients were shown in Table 1. Our research included 42 (19.6%) female and 172 (80.4%) male. And the median age was 60 years, ranging from 32 to 84 years. 114 (53.3%) patients’ tumor location was in the middle third of esophagus while 76 (35.5%) patients’ location occurred in the lower third, and only 24 (11.2%) patients’ tumor was located in the upper third. 128 (59.9%) patients received surgery alone, and adjuvant therapy were adopted among 86 (40.1%) patients, including postoperative radiotherapy in 39 patients, postoperative chemotherapy in 15 patients and postoperative chemoradiotherapy in 32 patients. The median follow-up time was 38.8 months (range 1.3–71.0 months). During the follow-up period, recurrence occurred in 101 (47.2%) patients, in which 12 cases had surgical anastomosis recurrences, 5 cases had local recurrences, 40 cases had lymph nodes metastasis and 44 cases developed distant metastasis.

Associations of TG, TC, LDL-C and HDL-C with clinicopathological characteristics

Survival and evaluation of the prognostic value of TC, LDL-C and LHR

Table 4: DFS and OS of esophageal squamous cell carcinoma patients with normal pretreatment serum albumin according to their TC and LDL-C

Table 5: DFS and OS of esophageal squamous cell carcinoma patients with elevations and no elevations in pretreatment serum LDL-C according to their LHR

LHR was analyzed in this study and its optimal cutoff value was determined as 2.12. Kaplan–Meier curves of DFS and OS based on LHR was given in Figure 1. Patients with low LHR showed poor DFS and OS (both p < 0.001). To evaluate whether the relationship between LHR and survival was merely affected by elevated LDL-C, patients were stratified according to their LDL-C levels (Table 5). In patients with no elevations in LDL-C, those who had lower LHR tended to show inferior DFS (p = 0.036) and OS (p = 0.044). In patients with elevated LDL-C, LHR showed no association with DFS (p = 0.071) and OS (p = 0.065). 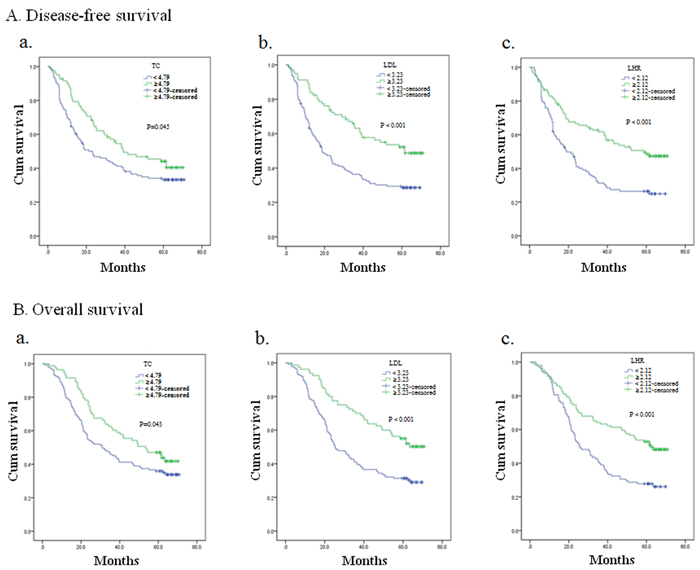 Figure 1: Kaplan–Meier analysis for disease-free survival and overall survival of esophageal squamous cell carcinomapatients based on preoperative TC, LDL-C and LDL-C/HDL-C ratio (LHR) at the end of follow-up. 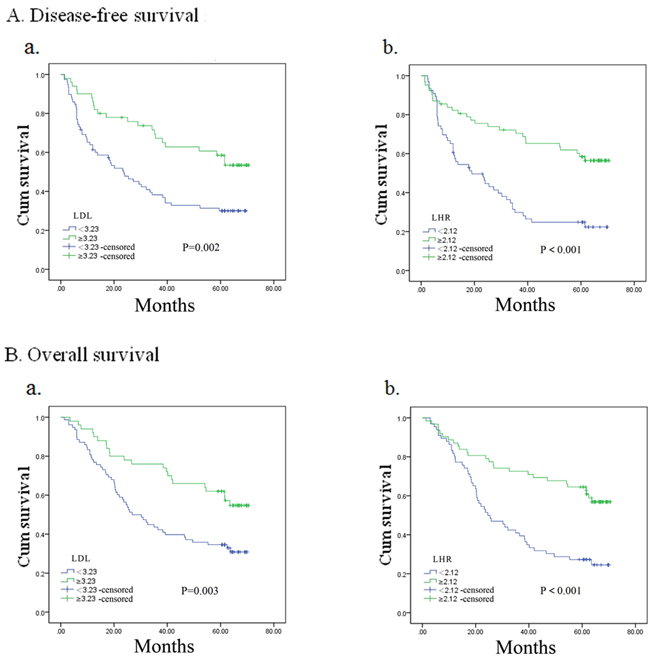 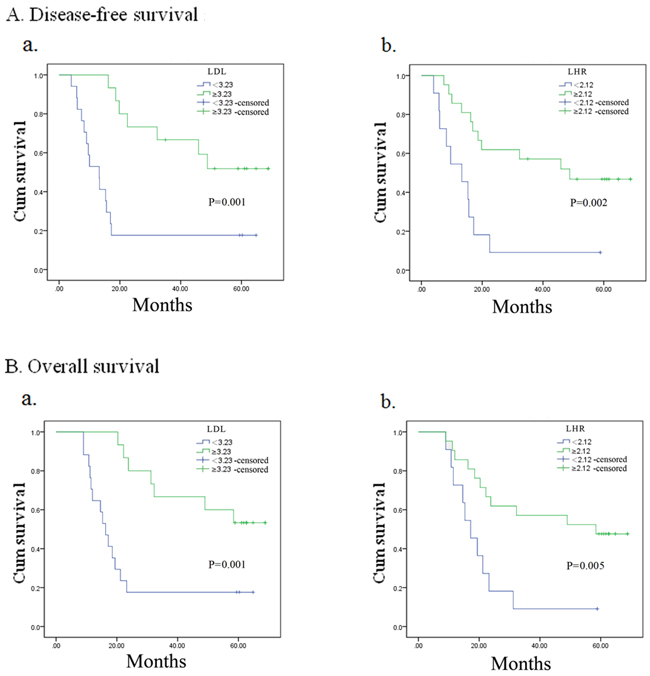 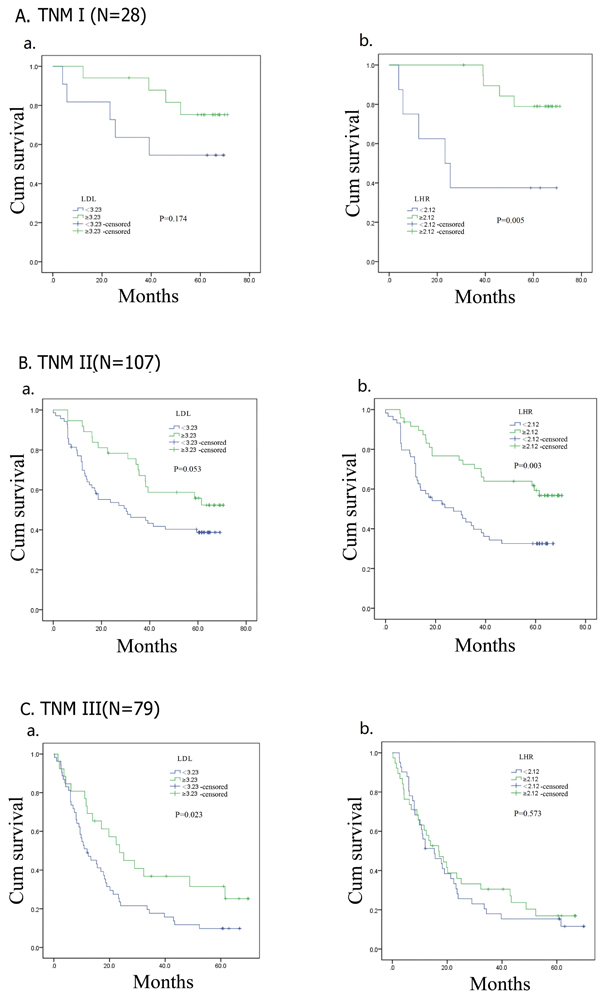 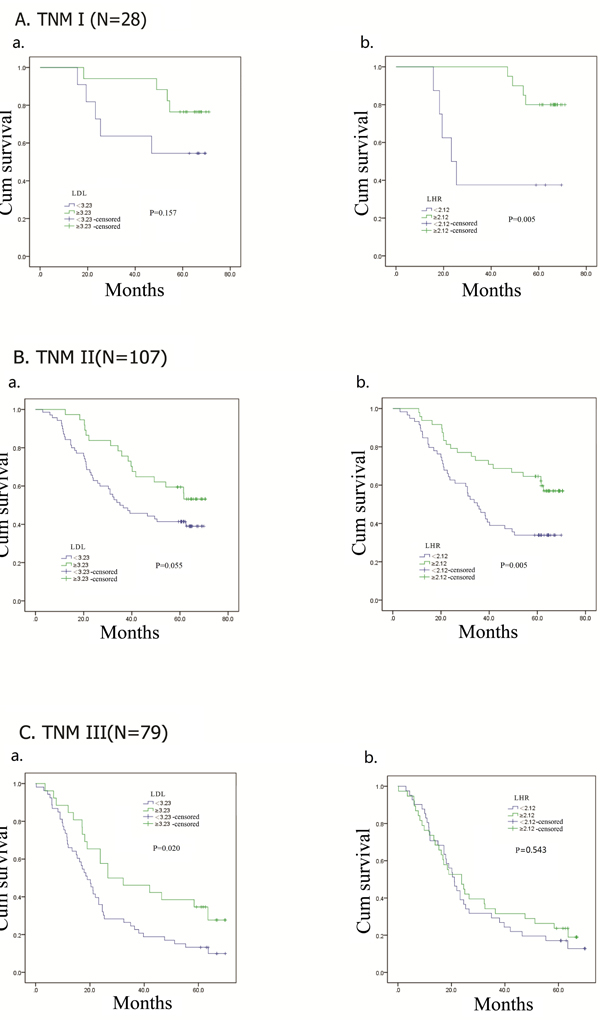 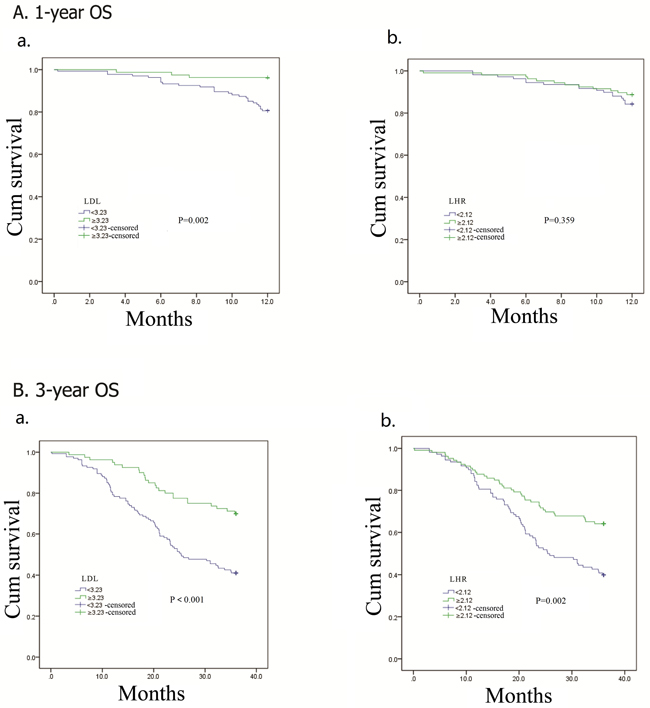 Cholesterol, as one of the structural component of cell membrane, is involved in some signaling pathways that are essential to malignant transformation [14]. LDL-C and HDL-C are key lipoproteins in the transportation of cholesterol. Studies had explored the relationship of cholesterol and LDL-C with cancer. It is reported that people with lower LDL-C level were more likely to generate tumor and most cancer-bearers got low LDL-C and TC levels [11, 15]. Saito et al suggested that lower LDL-C level occurred in liver cancer patients, and mortality was the highest in the lowest TC group [12]. Other researches also implied that low LDL-C and cholesterol were accompanied by obviously elevated cancer risk and mortality [16-19]. In the present study, we found the median DFS and OS were 18.3 and 25.4 months in low LDL-C group while 50.0 and 59.8 months in high LDL-C group (p < 0.001). The median DFS and OS were 18.8 and 31.4 months in low TC group, compared with 38.2 and 53.5 months in high TC group (for DFS, p = 0.031; for OS, p = 0.016). The mortality of patients with low LDL-C was 70.1%, which was 1.44 times higher than that in high LDL-C group (p = 0.002). Studies [8, 20] found that TC and LDL-C levels were obviously lower in patients with esophageal, gastric or breast cancer, even in early stage cancer-bearers. This suggested that the lipid changes might not be the products of reduced food intake or deteriorative nutritional status. We analyzed TC and LDL-C in patients with normal serum albumin and found the positive results.

Previous researches also supported our results. Firstly, tumor-associated hypocholesterolemia had been hypothesized as elevated LDL-C uptake in tumor cells, and TC and LDL-C would reduce because of the tumor consumption [8, 10]. As Y. Tomiki reported, we also found negative outcomes for HDL-C and TG implying low TC might stem from low LDL-C [8]. This might explain why TC exhibited slight statistical relationship with DFS and OS in our analyses. High pretreatment TC and LDL-C levels might represent low LDL-C uptake of tumor cells meaning low tumor metabolic activity. Secondly, increased LDL-C could enhance human immunological response and promote clearance of pathogen as reported [21]. Thirdly, other reports confirmed that oxidized low-density lipoprotein (oxLDL-C) had cytotoxicity on different cell lines and could activate apoptosis of esophageal cancer cells [22-24]. Fourthly, recent studies suggested that LDL-C could inhibit angiogenesis by disrupting hypoxia inducible factor (HIF) pathway and hindering endothelial cell migration [25, 26]. Angiogenesis could promote tumor development and showed association with tumor necrosis, which was a hallmark of poor prognosis [27-29]. Besides, a cohort suggested that higher LDL-C was associated with a lower mortality of all causes [30].

In previous studies [5, 31], LHR acted as a prognostic factor in colorectal cancer patients, providing different information from LDL-C. Our results indicated that ESCC patients with low LHR had poor survival outcomes. The median DFS in low and high LHR groups were 18.4 and 47.4 months (p < 0.001). The median OS of these two groups were 25.6 and 59.7 months (p < 0.001). To confirm whether LHR was merely affected by LDL-C or not, we stratified patients according to elevation ( ≥3.4mmol/L) of LDL-C. In patients with elevated LDL-C, the LHR had no relationship with DFS and OS. But DFS and OS showed statistical difference between two LHR groups in patients with no elevations in LDL-C. The recurrence rate was 54.6% in low LHR group, which was 1.38 times higher than that in high LHR group (p = 0.030). The recurrence rate had no statistical difference according to LDL-C. These suggested LHR could provide much prognostic information, even when preoperative LDL-C was normal. The mechanisms might be involved in the relation of dysfunctional lipid metabolism and cancer development [6, 8, 9].

There were some limitations in our research. First, it was a retrospective cohort with a small sample. Second, we did not figure out the causal relationship of low serum lipids and cancer development. It is hard to say whether low TC and LDL-C can promote cancer development or is the result of advanced cancer. Third, it was uncertain whether other cutoff values could act as better predictors. Fundamental knowledge is needed to elucidate the association of serum lipids and survival time in ESCC patients, and further basic and clinical researches are required.

In conclusion, low serum TC and LDL-C levels are predictive factors for poor prognosis in ESCC patients who underwent esophagectomy. LHR, as an independent factor, can serve as a novel and promising serum lipids-based prognostic indicator, especially for patients with earlier pathological stage. Measurements of serum lipids are inexpensive, convenient and routinely tested in clinic, especially before surgery. This will provide potential prognostic information for clinicians to facilitate the personalized treatment.

During January 2007 to December 2008, 214 patients with esophageal squamous cell carcinoma who received esophagetomy in the Department of Thoracic Surgery, Qilu Hospital of Shandong University, were admitted into our retrospective study. A patient was excluded from the study: 1) if the patient had more than one primary tumors; 2) if the patient received neoadjuvant therapy; 3) if the patient had serious metabolic diseases before; 4) if the patient was lost during our follow-up. All the clinicopathological features came from patients’ records. The tumor was staged on the basis of the American Joint Committee on Cancer staging manual (seventh edition, 2010). The hematological and laboratory data were tested within one week before the surgery. And this study was ratified by the Ethics Committee of Qilu Hospital of Shandong University.

Patients were followed up by telephone and face-to-face communication in the outpatient clinics every 3 months in the first 2 years after surgery. Then the patients’ information were obtained every 6 months until they were lost or dead. The ending time of follow-up was November 2013. Follow-up items included basic physical examination, laboratory blood or urine tests and routine computed tomography. The endpoints of our study were 5-year DFS and 5-year OS. DFS was defined as the time interval (in months) following by surgery during which patients lived with no tumor recurrence or advancement occurred. OS was the time interval (in months) from the date of surgery to death or the last follow-up date. In this study, we used the DFS and OS at the end of follow-up as the 5-year DFS and OS approximately.

Statistical analysis was performed using the Statistical Package for Social Science (SPSS for Windows, version 20.0, SPSS Inc., Chicago, IL) program. Serum TG, TC, LDL-C, HDL-C and LHR were shown as the mean and standard deviation (SD) and were assessed across the differential grade, T classification, N classification, pathological stage and recurrence. Correlations between categorical variables were evaluated by the Pearson’s chi square test or Fisher’s exact test in this study. And an unpaired t test and one-way analysis of variance were adopted in assessing continuous variables in different subgroups. The probable cutoff value levels for these continuous serum lipids and LHR were calculated by applying receiver operating curve (ROC) analysis. ROC curves were also adopted to verify the accuracy of LDL-C and LHR for survival prediction. In DFS and OS analyses, the Kaplan–Meier method and log-rank tests were used in this study. Besides, the Cox proportional hazards regression model was applied in our univariate and multivariate analyses. Those variables which exhibited statistical significance in the univariate analysis were included into the multivariable analysis. The two-sided p value was used in our analyses, and a p value of less than 0.05 represented statistical significance.

This work was supported by the National Natural Science Foundation of China (no. 81572958) and Science and Technology Development Planning Project of Shandong Province (2014GSF118058).

There is no conflict of interest of this study.

24. Yutao Diao HL. Association of serum levels of lipid and its novel constituents with the different stages of esophageal carcinoma. Lipids in Health and Disease. 2009; 8:48.