High-altitude pulmonary edema (HAPE), a potentially fatal medical condition, is the cause of deaths due to high-altitude illness [1]. HAPE is a form of increased permeability pulmonary edema of non-cardiogenic origin that usually occurs within 2-4 days of ascent above 2,500-3,000 m [1, 2]. Patients with HAPE include two types: inhabitants of high-altitudes who return to low altitudes, also known as “re-entry” HAPE, and healthy lowlanders who rapidly climb up and are not acclimatized to high altitudes [3]. In HAPE, hypoxia-induced pulmonary vasoconstriction leads to endothelial dysfunction and intravascular fluid retention [4, 5]. HAPE occurs frequently in people exposed to high altitudes [6, 7]. More than 140 million people living in high-mountain areas, including Asia and Americas, have suffered from HAPE [3]. Recently, the HAPE mortality rates have reached 50% [8], because of the increase in skiing, trekking, and climbing tours.

HAPE is a multifactorial disease that involves both environmental and genetic factors. Studies indicate that cell and tissue hypoxia can promote gene expression and induce expression of physiologically important proteins [9-13]. The genetic sensitivity to hypoxia has been known for years, and includes genes, such as nitric oxide synthase (NOS) [9], tyrosine hydroxylase (TH) [14], angiotensin-converting enzyme (ACE) [10], endothelin-1 (EDN-1) [11, 12], and vascular endothelial growth factor (VEGF) [13]. Genetic single nucleotide polymorphisms (SNPs) play a pivotal role in high altitude diseases, including the HAPE risk [15]. However, genetic studies about the etiology of HAPE are still rare.

In our study, we selected 15 SNPs in beta-2 adrenergic receptor (ADRB2), G protein β3 subunit (GNB3), glutathione transferase Pi 1 (GSTP1), and TH genes, which have been reported to be associated with pulmonary diseases, including asthma, HAPE, lung cancer, and chronic obstructive pulmonary disease (COPD) [16-20]. Based on previous research, we conducted a case-control study and identified an association of the ADRB2, GNB3, TH, and GSTP1 genes with the risk of HAPE in Chinese Han population. These results may provide a basis for the clinical prevention of HAPE.

A total of 267 patients with HAPE and 304 healthy people were enrolled in this case-control study. The HAPE cases and controls were matched by sex, but there was a significant difference in age between HAPE cases and controls (p < 0.05); the average ages were 36.2 ± 4.5 years and 32.6 ± 10.7 years, respectively. The characteristics of the studied population are summarized in Table 1.

Table 1: Characteristics of the subjects

Table 2 summarizes the basic information of candidate SNPs in our study, such as chromosomal position, gene, allele, Hardy-Weinberg equilibrium (HWE) test results, and minor allele frequency (MAF). The HWE was agreed by p > 0.05. All success rates of the genotype assays were designed to have the cut off level less 98%.

The results of the genetic model are shown in Table 3. Co-dominant, dominant, recessive, and log-additive models were calculated and adjusted by age and gender. We found that co-dominant (p = 0.023) and dominant models (GT/GG vs TT: OR = 0.63, 95%CI = 0.45 – 0.89, p = 0.008) in GNB3 rs4963516 were associated with the risk of HAPE. We did not find any statistically significant association between the genotype and genetic model in other SNPs and the risk of HAPE. No association was observed after Bonferroni correction.

Finally, in order to assess the association between SNP haplotypes and HAPE risk, a Wald test was performed using an unconditional multivariate regression analysis. However, no association was observed (data not shown).

The GNB3 gene, located in 12p13, has been associated with mountain sickness [17]. It has been also reported in the hypertensive crisis, cardiovascular disease, and digestive system cancer [21, 22]. GNB3 regulates heterotrimeric guanine nucleotide-binding proteins (G-proteins), which integrate signals between receptors and effector proteins. HAPE is characterized by increased water and salt metabolism, and by abnormal cell membrane ion transport, which are regulated by G-proteins and beta 2 adrenergic receptor protein. In this study, we found that co-dominant and dominant models of GNB3 rs4963516 are associated with the decreased risk of HAPE. In contrast, we did not find a statistically significant correlation between rs5446 in GNB3 gene and the risk of HAPE; this is consistent with a previous study [23].

We used Hap Map to identify SNPs in the ADRB2 gene, a small (3446bp transcript, 1239bp coding sequence), intronless gene on chromosome 5 (Gene-Card number GC05P148186), which is the principal catecholamine receptor in the lungs, and plays a crucial role in pulmonary diseases. Wang et al reported that the common haplotypes in the ADRB2 are not associated with acute mountain sickness susceptibility in Nepalese population [24], while Chandramoorthi et al showed a significant association between the ADRB2 gene and the HAPE risk [25]. In this study, we found that the allelic model in ADRB2 rs1042718 is associated with the risk of HAPE (Table 2). However, our results show that the genetic models of ADRB2 are not associated with the risk of HAPE.

Consistent with previous studies, we have found no significant correlation between the blunted hypervariable region values in HAPE with the polymorphisms of the TH gene. These results indicate that the pathogenesis of HAPE is not influenced by the mutations of the TH, and that these polymorphisms may not be suitable genetic markers for the HAPE-susceptibility.

A limitation of this study is the relatively small data set, which limits the statistical power to detect effects for several of the assessed SNPs, particularly since much of them are not frequent. In addition, while the potential risk factors for HAPE, such as body mass index, menopausal status, smoking, and age, may interact with the SNPs, the relative similarity of our patient and control populations has reduced any confounding effects. Using Bonferroni correction, no statistically significant association between SNPs and the risk of HAPE has been found. This may be due to the relatively small sample size, the selection criteria for SNPs (minor allele frequency > 5%), and the weakness of the Bonferroni correction itself (the result interpretation depends on the number of other tests performed). True differences may have been deemed non-significant given the likelihood of type II errors.

To further evaluate the effect of polymorphisms of ADRB2, GNB3 and GSTP1 genes on the HAPE risk, future studies should analyze gene-gene and gene-environment interactions using large sample sizes.

Of the 571 participants, 267 were diagnosed with HAPE and recruited between August 2013 and December 2015 at the Hospital of the School of Medicine, Xizang Minzu University, China. The key inclusion criteria were based on clinical symptoms, epidemiology, and pathophysiology findings [28]. The clinical features recorded were: age at diagnosis, gender, radiological results, chest sounds, body temperature, heart rate, and oxygen saturation. All HAPE patients eventually exhibited chest infiltrates consistent with pulmonary edema. Controls (n=304) were healthy people selected from the same geographic region as the HAPE cases and recruited from the Hospital of the School of Medicine, Xizang Minzu University, China. The controls did not develop any symptoms or signs of HAPE or any high pressure-related diseases after exposure to high altitude within 7 days. All participants were of Chinese Han population and resided at low altitudes less than 2000 m. No participants used prophylactic medications, and the rate and altitude of ascent were the same among the HAPE cases and controls (altitude of the Tibetan plateau is 4000 to 5000 m). Venous blood samples were obtained from the same hospital to avoid definite selection bias, and the blood samples were taken according to the study protocol approved by the Ethics Committee of Mental Health Center, from the Hospital of School of Medicine, Xizang Minzu University. Informed consent for genetic testing was obtained from each participant before the enrollment of the subjects.

We selected 15 putative functional SNPs in ADRB2, GNB3, TH and GSTP1 genes. The SNPs were found from recent respiratory publications. The first report was an acute mountain sickness susceptibility study in Nepalese population; from that study, SNPs in ADRB2 (rs2400707, rs12654778, rs11168070, and rs1042718) were selected [29]. The second report suggested that the TH gene may be associated with homovanillic acid and 3-methoxy-4-hydroxyphenylglycol, and the SNPs selected were rs10770140, rs10770141, and rs10840491 [30]. Finally, other studies identified the remaining SNPs associated with lung function [27, 31-33]. The SNPs were identified using dbSNP database (http://www.ncbi.nlm.nih.gov/projects/SNP), and genotyped using Sequenom MassARRAY RS1000 (Sequenom, Inc) following the manufacturer’s instructions. Primers were designed for each SNP and are listed in Table 4. Genotyping and data management were performed at the Molecular Research Laboratory of the Biotechnology, Northwest University, China. The overall success rate of all the genotyping assays was over 98%. All samples with ambiguous results were measured repeatedly, as was a random selection of 10% of all samples to ensure laboratory quality control.

Table 4: The SNPs primers used for this study 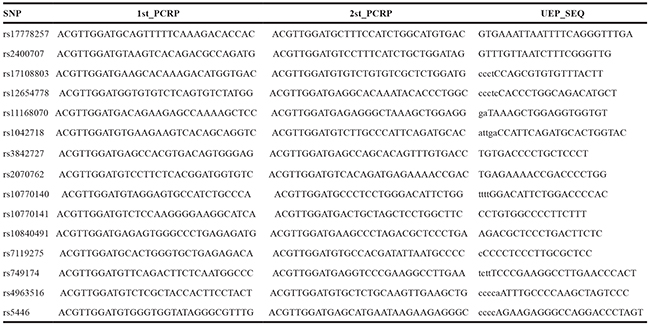 Statistical analyses were performed using SPSS version 17.0 for Windows (SPSS, Chicago, IL) and SNPstats software platform (http://bioinfo.iconcologia.net/SNPstats_web). Analysis of variance (ANOVA) was used to compare differences between genotypes for the various parameters. Chi-square test was used to identify departures from Hardy–Weinberg equilibrium. Analysis for genotype and allele effects was undertaken using the Chi-square test of independence, OR and 95% CI were calculated from the combined results of both populations, adjusting for age and gender. In addition, comparison of population characteristics was performed using an independent sample t-test (using Levene’s test for equality of variances) for continuous variables and an additional Chi-square test for categorical variables.

This work was supported by the Major science and technology research projects of Xizang (Tibet) Autonomous Region (2015XZ01G23), and National Natural Science Foundations (No. 81560516). The authors wish to thank participants in the study who made this work possible. We would also like to thank the clinicians and other hospital staff who contributed to the blood sample and data collection for this study.

All authors declare no conflict of interest.

5. Garnier J, Osguthorpe DJ and Robson B. Analysis of the accuracy and implications of simple methods for predicting the secondary structure of globular proteins. J Mol Biol. 1978; 120:97-120.