Objective: Previous studies have suggested a correlation between glucose transporter-1 (GLUT-1) expression and survival outcomes in pancreatic cancer, although the results were inconsistent. We subsequently carried out a meta-analysis, with the aim of comprehensively reevaluating the associations between GLUT-1 expression and overall survival (OS) and other clinical features of pancreatic cancer.

Materials and Methods: Relevant databases were searched using predefined searching items until September 2016. The pooled hazard ratios (HR) with 95% confidence interval (CI) for OS and the pooled odds ratio (OR) with 95% CI for clinical factors were calculated.

Pancreatic cancer has a high mortality rate among all cancer types [1]. Of the 10 leading types of cancer in the United States, pancreatic cancer has a morbidity of approximately 3%, while the total mortality due to pancreatic cancer is approximately 7%[2]. The 5-year survival rate of patients with pancreatic cancer is 6%, and only one-fifth of all patients are eligible for curative surgery at the time of first diagnosis [3]. The very poor prognosis of this disease is largely attributed to early locoregional invasion and distant metastasis [4]. Tumor differentiation and size, and carbohydrate antigen 19-9 are independent prognostic factors that are often used to predict survival; however, these biomarkers lack sensitivity or specificity for prognostication [5]. In order to be able to make more individualized therapeutic regimens for patients, it is important to identify novel and valid biomarkers for pancreatic cancer.

Increased glycolytic metabolism is an important characteristic of cancer cells [6]. Glucose transporters (GLUTs) are a family of proteins containing 13 members that mediate glucose transport through the membrane into cells [7, 8]. Glucose transporter-1 (GLUT-1) is the first established member of GLUT family, which is normally expressed in erythrocytes, renal tubules, and the placenta [9]. In recent years, GLUT-1 was also reported to be overexpressed in various cancer types including hepatocellular carcinoma [10], prostate carcinoma [11], lung adenocarcinoma [12], oral squamous cell carcinoma [13], and pancreatic cancer [14–16]. Interestingly, previous studies provided conflicting results regarding the correlation of GLUT-1 expression and clinical outcomes in pancreatic cancer [14, 17, 18]. For example, Kitasato et al. identified GLUT-1 overexpression as being a significant biomarker for overall survival (OS) in pancreatic cancer patients (p=0.0102)[18]. Pizzi et al. also reported the independent prognostic role of GLUT-1 in pancreatic cancer by multivariate analysis [16]. However, Basturk and colleagues failed to find a significant prognostic function of GLUT-1 in their study (p=0.8392)[14]. Furthermore, Lyshchik et al. reported non-significant results (p=0.29) concerning the prognostic role of GLUT-1 in pancreatic cancer [19]. We therefore conducted a meta-analysis of eligible studies to quantitatively assess the association between GLUT-1 expression and OS as well as clinical features in patients with pancreatic cancer.

Figure 1 shows the literature selection procedures, where a total of 482 records were identified after the initial search procedure. After duplicate records were removed, 399 studies were screened by reviewing either title and/or abstract. A total of 381 records were subsequently excluded, and 18 full-text articles were further evaluated. Ten full-text articles were excluded because they did not provide necessary data such as OS, were duplicate studies, or did not focus on GLUT-1. A final total of eight studies were eligible for this meta-analysis [14–21]. 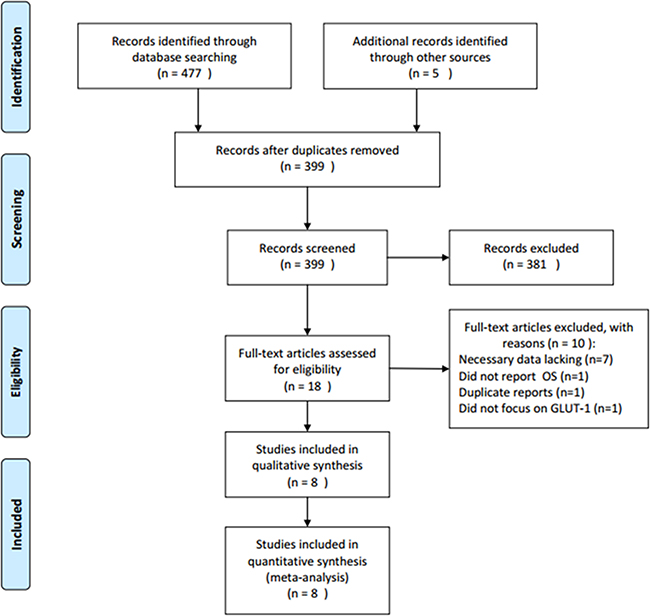 Figure 1: Flow chart of study selection for the meta-analysis.

GLUT-1 and OS in pancreatic cancer 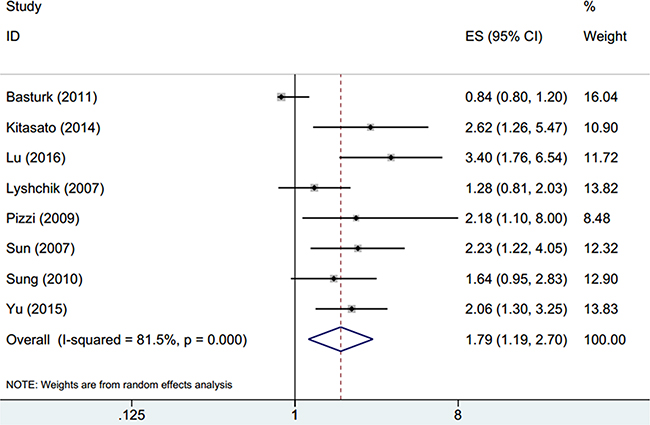 Figure 2: Forest plot for the association between GLUT-1 expression and OS in pancreatic cancer.

Table 2: Stratified analysis of pooled HRs for GLUT-1 and OS in pancreatic cancer

Table 3: Correlation of GLUT-1 and clinical factors in pancreatic cancer

Publication bias was determined by using the Begg’s test. The results showed that Begg’s p-value was 0.386 for GLUT-1 and OS analysis (Figure 3). The data demonstrated that there was no evidence of significant publication bias in this meta-analysis. 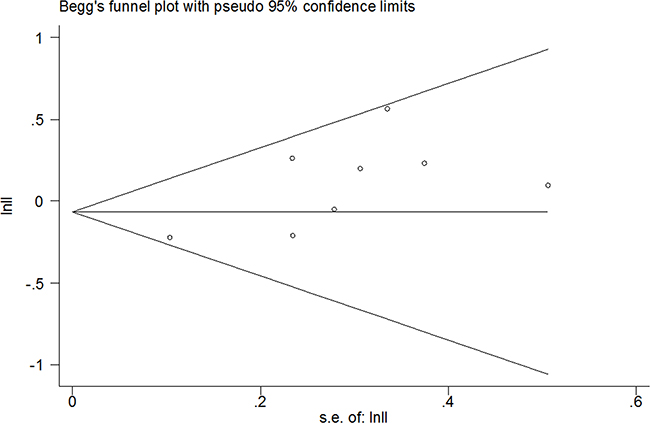 Pancreatic cancer has poor prognosis, with a 5-year survival rate of <5%, owing to the fact that most cases are asymptomatic until the disease proceeds to advanced stages [5]. Several prognostic biomarkers are currently applied in the clinical management of pancreatic cancer; however, the prognostic efficiency is limited [4]. In the present study, we performed a meta-analysis that demonstrated that GLUT-1 expression was associated with shorter OS in patients with pancreatic cancer. In addition, GLUT-1 was also correlated with larger tumor size (>2 cm) and presence of lymph node metastasis. Taken together, these results demonstrated that GLUT-1 overexpression has the potential to be a biomarker for poor survival and dissemination in pancreatic cancer. To the best of our knowledge, the present study was the first meta-analysis to date to show the prognostic significance of GLUT-1 in pancreatic cancer.

GLUT-1 is the most common glucose transporter in humans, which is also widely expressed in a variety of malignant tumors [6, 22]. High GLUT-1 expression was reported to be related with pancreatic cancer invasiveness, and GLUT-1 was also implicated in a pancreatic carcinogenesis progression model [14, 23]. GLUT-1 overexpression in tumor tissues reflects the increased requirement for glucose, which is one of the main fuel sources for cancer cells. GLUT-1 was found to be correlated with biological behaviors of different tumors [24, 25]. In addition, GLUT-1 overexpression was also found to be associated with cancer progression and poor survival outcomes in different types of cancer, including bone and soft-tissue sarcomas [26], colorectal cancer [27], breast cancer [28], and lung cancer [29]. The findings of the present meta-analysis were in line with the results of previous studies on other types of cancer. More importantly, several primary studies [14, 15, 19] on pancreatic failed to find the positive correlation between GLUT-1 overexpression and poor survival in pancreatic cancer. For example, both Basturk et al. [14] and Lyshchik [19] failed to identify GLUT-1 expression as a significant marker for OS (p=0.8392 and p=0.29, respectively). By contrast, other investigators [16, 18, 20, 21] showed the prognostic value of GLUT-1 expression for pancreatic cancer. The discrepancies may be owing to the following reasons: firstly, different antibodies were used in IHC, and confounding factors such as differences in brand, isotype, and dilution could lead to heterogeneity of results. Secondly, patient selection criteria differed between the eight studies, and these patients were of different ethnic backgrounds. Third, the follow-up in included studies were different, which may also have had an impact on the individual results. Our meta-analysis pooled the conflicting results from eligible studies and presented a relatively definitive conclusion after quantitative calculations. Therefore, this meta-analysis provided implications for clinical practice in pancreatic cancer.

However, several limitations of the present meta-analysis need to be acknowledged. Firstly, only studies published in English were included in the final meta-analysis, and while both English and Chinese papers were searched, the eight eligible studies (according to inclusion and exclusion criteria) were all published in English. Secondly, the sample size of articles was relatively small, where only eight studies with 538 cases in total were included, which may have introduced selection bias. Lastly, there were limited categories where subgroup analyses could be performed, because studies were selected according to uniform inclusion criteria, and the eligibility criteria were therefore homogeneous in some aspects.

The current meta-analysis was carried out according to the Preferred Reporting Items for Systematic Reviews and Meta-Analyses (PRISMA) statement [30]. The following electronic databases were comprehensively searched for relevant studies: PubMed, Web of Science, Embase, and China National Knowledge Infrastructure (CNKI). The last search was updated on September 15, 2016. The search terms were as follows: (glucose transporter-1 or GLUT-1 or glut1 or GLUT or glucose transporter or SLC2A1) and (pancreatic or pancreas*) and (cancer or tumor or tumour or neoplasm or carcinoma or adenocarcinoma) and (prognosis or prognostic or predict or predictive or treatment or survival). References of all relevant articles were also screened to find other potentially applicable studies.

Papers published in either English or Chinese were eligible for selection, and the inclusion criteria were as follows: 1) the diagnosis of pancreatic cancer was established on anatomical pathology specimen examination; 2) GLUT-1 expression was detected by immunohistochemistry (IHC) in tissue specimens; 3) studies must have reported the hazard ratio (HR) and 95% confidence interval (CI) for OS or provided sufficient information for calculation according to Tierney’s method [31] and 4) studies were published as full-text articles. If different studies were published based on the same patients group, then the more comprehensive one was selected. Exclusion of studies was based on the following criteria: 1) meeting abstracts, reviews, case reports, and letters; 2) duplicate studies; 3) animal studies; and 4) studies with insufficient information. Two investigators independently evaluated the eligibility of relevant studies per selection criteria, and discrepancies were resolved by discussion.

The following information was extracted from included studies: first author, year, country, number of patients, treatment, tumor stage, detection method, age, and survival data. If any data was lacking, they were labeled as “not reported”. The quality of eligible studies was evaluated by using Newcastle-Ottawa Quality Assessment Scale (NOS). The NOS scale was composed of three categories with a full score of 9 stars. Studies scored ≥6 stars were considered to be of high quality.

HR and 95% CI were used to estimate the impact of GLUT-1 on OS. Cochran’s Q test and I2 were used to assess the heterogeneity of the included studies. A p-value of <0.10 for Cochrane’s Q test or I2>50% represented significant heterogeneity, and the random-effects (DerSimonian–Laird method) model was subsequently used in these analyses. The fixed-effects (Mantel–Haenszel method) model was utilized for the remaining analyses. Subgroup analysis was conducted for exploring heterogeneity and for further analysis. ORs and 95% CIs were used as effective measure of the association between GLUT-1 expression and clinical features in pancreatic cancer, while publication bias was estimated by using Begg’s funnel plot (p<0.05 was considered statistically significant). All analyses were performed by using STATA software version 12.0 (StataCorp LP, College Station, TX, USA).

The authors of this article have no conflicts of interest.