* The first two authors contributed equally to this work

Stroke is the second most common cause of death after cancer and a leading cause of adult disability worldwide [1]. Approximately 85% of strokes are ischemic strokes [2]. Stroke incidence appears to be increasing, and the associated economic costs are staggering [3].Population-or hospital-based prospective studies and large randomized trials have identified carotid plaques [4-6]and major intracranial arterial stenosis[7-9 ]as major causes of stroke, especially in Asians, Blacks, and Hispanics. Thus, identifying easily screenable factors that may correlate with the presence or severity of carotid plaques or major intracranial arterial stenosis may help identify individuals at risk of stroke.

Thyroid dysfunction, including overt hyper-or hypothyroidism as well as subclinical thyroid disease, has been associated with cardiovascular disease [10], cerebrovascular risk [11, 12], atherosclerosis [13, 14] and thickening of the carotid artery intima media [15, 16]. In addition, thyroid function at the low end of the normal range (still within euthyroid limits) has been associated with increased levels of inflammatory markers [17], thickening of the carotid intima media [18-21], stenosis of the internal carotid artery [22], and ulceration of carotid artery plaques [23].These associations suggest that thyroid function may be associated with intracranial arterial stenosis and/or carotid atheromatous plaques in ischemic stroke patients, even in patients with euthyroidism. However, we are unaware of published work on this question. 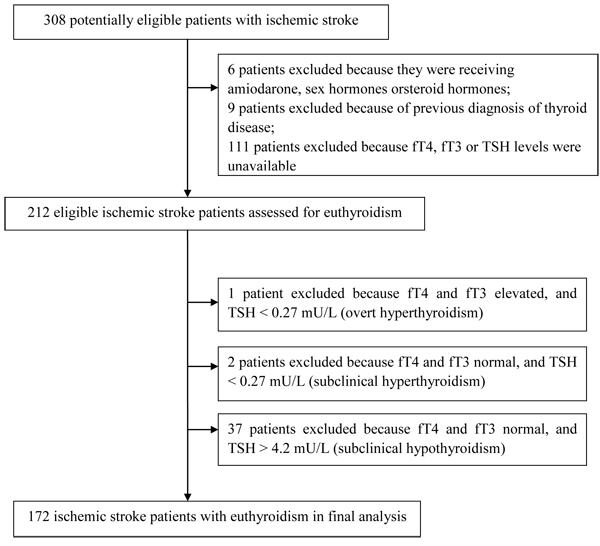 The raw (continuous) levels of TSH, fT4 and fT3 were then converted into quartiles (Table 3) in order to perform logistic regression to identify possible associations of thyroid function with carotid atheromatous plaques or intracranial artery stenosis. Only one significant association was found: patients in lower fT4 quartiles were at significantly higher risk of carotid atheromatous plaques than patients in the highest quartile. This relationship persisted even after adjusting for age, gender, hyperlipidemia, and smoking consumption (OR 0.73, 95% CI 0.54-0.99, P= 0.04, Table 4).

Data were adjusted for age, gender, hyperlipidemia, and smoking consumption.

The present study suggests that low fT4 levels are independently associated with the presence of carotid atheromatous plaques in ischemic stroke patients with euthyroidism. Given that carotid plaques are associated with subsequent ischemic stroke [4-6], our data support the possibility that low-normal thyroid function can increase cerebrovascular risk, suggesting the need to improve thyroid screening and to redefine optimal ranges of thyroid hormone serum concentrations.

Our results are consistent with previous studies showing associations between low fT4 levels and elevated levels of inflammatory markers [17], mitral annular calcification [24], and thickening of the carotid intima media [18-21] in stroke patients with euthyroidism. Since our findings were obtained with a relatively large and inclusive sample of ischemic stroke patients, we strengthen the case for targeted screening of ischemic stroke patients with low-normal thyroid function for carotid atheromatous plaques.

Possible factors may help explain why fT3 was not associated with plaques in our patients. These factors include the short half-life of fT3, the possibility that serum concentrations of fT3 do not accurately reflect concentrations in tissues, and the greater sensitivity of fT3 than fT4 to hyperthyroidism, which may not be associated with carotid artery plaques. Further work should verify and extend our findings about fT3 in ischemic stroke patients.

Indeed, intracranial arterial stenosis differs from carotid atheromatous plaques in epidemiology and risk factors. Stenosis occurred in 47.1% of our patients, while carotid plaques occurred in 32.0%, similar to previous studies in Chinese [33] and other Asians [32, 34-37], suggesting that intracranial arterial stenosis is more prevalent among Asians. Moreover, we found carotid atheromatous plaques to correlate positively with age, gender, hypercholesterolemia and previous smoking, consistent with previous work [38]; such correlations were not observed for stenosis.

This study has some limitations. First, it was a retrospective, cross-sectional, hospital-based study, which means that cause-and-effect relationships between fT4 levels and carotid atheromatous plaques cannot be explored. Second, the patients we excluded were more likely to be female; this may have confounded our results, since the function of the hypothalamic-pituitary-thyroid (HPT) axis shows subtle sex differences [39], and men are more likely than women to have atherosclerosis [40]. To reduce the potential effects of such bias, we adjusted for age, gender, hyperlipidemia, and previous smoking in the multivariate analysis, which still indicated a significant relationship between low fT4 levels and carotid atheromatous plaques. Third, we measured fT4, fT3 and TSH levels only once and we did not measure thyroid autoantibody levels. This may have led to misdiagnosis of thyroid disease in some cases, since levels of thyroid hormones, especially TSH, can vary in patients with acute ischemic stroke [38, 41].To reduce the potential confounding effects of non-thyroidal illness on thyroid function, we excluded patients who had abnormal TSH values or who were taking thyroid medication. Longitudinal studies involving larger samples are required to verify our findings on the influence of thyroid function on carotid atheromatous plaques and intracranial arterial stenosis.

Low fT4 levels were independently associated with carotid atheromatous plaques in a consecutive sample of Chinese ischemic stroke patients with euthyroidism. In contrast, no association was found between any of the three thyroid hormones tested and intracranial artery stenosis.

This study involved retrospective analysis of medical records that had been entered prospectively into the Chengdu Stroke Registry, a database on consecutive ischemic stroke patients treated at West China Hospital since 2005.The study protocol was approved by the Scientific Research Department of West China Hospital. Written informed consent was obtained from participants or their guardians.

Patients were excluded from the study if (1)they had previously been prescribed amiodarone, sex hormones or steroid hormones; (2)they had previously been diagnosed with thyroid disease; or (3)their levels of free triiodothyronine (fT3), free thyroxine (fT4), or thyroid-stimulating hormone(TSH) on the morning after hospital admission were unavailable.

Diagnosis of intracranial artery stenosis [45-46] was based on ≥50% reduction in the luminal diameter of at least one major intracranial artery, defined as the intracranial internal carotid artery, anterior cerebral artery, middle cerebral artery, posterior cerebral artery, posterior inferior cerebellar artery, intracranial vertebral artery, or basilar artery. Luminal diameter was determined by CT angiograms, on which arteries usually appear homogeneously full of contrast material, and arterial walls appear as a sharp boundary [33]. Diagnosis of a carotid atheromatous plaque [33] was based on the absence of contrast material adjacent to the arterial wall. Two neurologists blinded to clinical information independently evaluated CT angiograms. A third neurologist arbitrated in case of disagreement, and a consensus decision was reached. The inter-class correlation coefficient (ICC) for the two reviewers was 0.876 (95% CI 0.720–0.816), indicating very good inter-observer agreement.

Data for continuous variables were reported as mean ± standard deviation (SD), and data for categorical variables as absolute or relative frequencies. Intergroup differences in categorical variables were assessed for significance using the chi-squared or Fisher’s exact tests, while differences in continuous variables were assessed using one-way analysis of variance (ANOVA) or the Mann–Whitney U test. Patients were first compared based on the raw (continuous) values of thyroid hormones. Then they were classified into quartiles for logistic regression to identify associations of thyroid function with intracranial artery stenosis or carotid atheromatous plaques. Variables with P< 0.1 in univariate analysis were included in multivariate logistic regression. All statistical analysis was performed using SPSS 20.0 (IBM, Chicago, IL, USA). Two-sided P<0.05 was considered to be statistically significant.

This research was supported by the Science and technology infrastructure projects of Sichuan Province (NO.2012JCPT008), and Chengdu Science and Technology Public Welfare Project (2014-HM01-00398-SF).