Hepatocellular carcinoma (HCC) was the fourth leading cause of global cancer deaths in 2012 [1-3]. Depending on the extent of the disease and the underlying liver status, patients may be treated with local, locoregional, and/or systemic therapy. Several clinical trials have indicated that radiotherapy (RT) can play a meaningful role in the management of HCC [4-8]. Although there is no high level evidence from randomized controlled trial, the efficacy and safety of RT in HCC has been shown by several prospective or retrospective trials using modern RT techniques, especially in Asia-Pacific, where have higher incidence of HCC than other areas [9, 10]. In the 5th Asia-Pacific Primary Liver Cancer Expert Meeting (APPLE 2014), a consensus on the utility and efficacy of RT in the treatment of HCC according to different cancer stage have been made: in early and intermediate stage HCC, if standard treatment is not compatible, RT, including EBRT and SIRT can be considered. In locally advanced stage HCC, combined EBRT with transarterial chemoembolization or hepatic arterial infusion chemotherapy, and SIRT can be considered [9]. 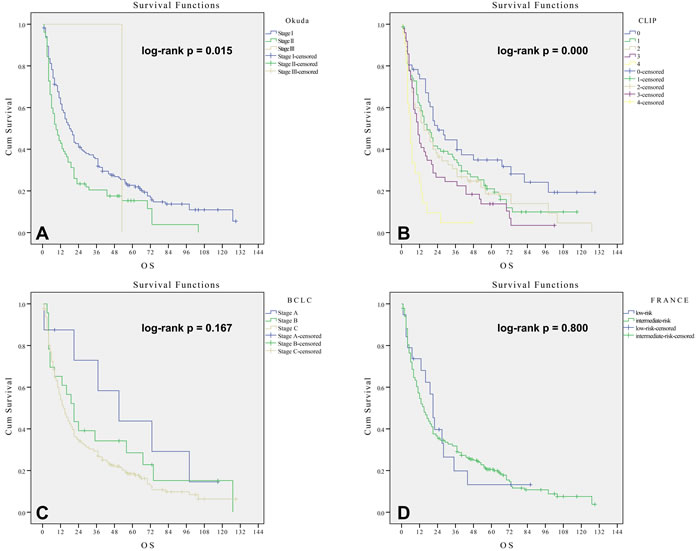 The median survival times for the France low-risk group and intermediate-risk group were 21 and 15 months, respectively (log-rank p value = 0.800; C-index = 0.5050, se = 0.0108). There was no significant difference in OS between the low-risk and intermediate-risk groups (p > 0.05), Figure 1D. This result suggested that the France staging system had no discriminative power in stratifying patients and predicting prognosis in this cohort. 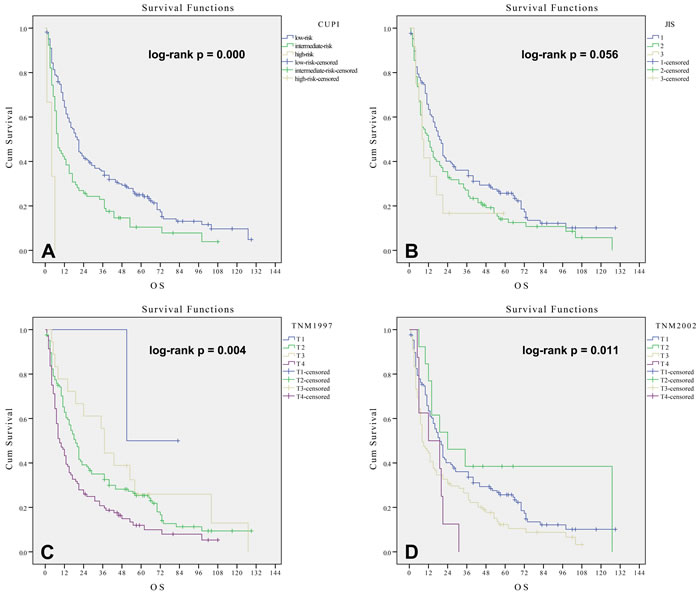 Figure 3: Kaplan-Meier method estimates of cumulative survival curves by the TNM 2010 A. and Chinese Guangzhou 2001 staging system B. in 249 patients undergoing RT.

The Okuda staging system was one of the first developed [11]. Although it does not consider tumor factors in detail, it does account for liver function status, which plays an important role in predicting prognosis [15]. In our study, Okuda stage I patients had a significantly longer survival than Okuda stage II patients (p = 0.004). Although the difference between stages II and III could not be evaluated because only one patient was classified as Okuda stage III, the Okuda staging system was successful in predicting survival for early and intermediate stage HCC patients.

The BCLC [14] classification system was reported to be the best therapeutic guideline, especially for early liver cancer patients who can receive radical surgery [23, 24]. However, it had some deficits: (1) scoring is complex and requires more parameters; and (2) it is not feasible to obtain information on values such as performance score (PS) and portal hypertension for a retrospective clinical study. Our studies showed that there was no statistical differentiation among all stages.

The variables of France staging system [15] are liver function status, performance status test (PST) and portal vein cancerous thrombosis. Both it and the BCLC classification system include subjective factors such as PST. Our study showed that there was no significant difference in overall survival between the low- and intermediate-risk groups (p = 0.800).

Our study found that CUPI [16] was good at predicting overall survival for HCC patients undergoing radiotherapy. CUPI was constructed for patients with HCC based on large numbers of patients. However, almost all of the patients had HBV-related HCC (79%). Europe and the United States populations are more typically infected with the HCV virus, while the Asian population is more commonly infected with the HBV virus; perhaps it can be said that CUPI applies to patients with HBV-related liver cancer to predict the prognosis of overall survival. This study found that CUPI was able to better predict patient survival prognosis that could not be excluded precisely because of this feature; an American scholar demonstrated that CUPI showed a better prognostic ability with HCC patients undergoing transcatheter arterial chemoembolization (TACE) [25]. The limitations of our study were mainly due to the unbalanced distribution of different stage HCC patients, which makes it impossible to compare all patients. Therefore, further studies should expand the sample size to balance patients among different stages.

The JIS scoring system [17] was proposed based on the integrated Japanese TNM staging system and Child-Pugh class. The Liver Cancer Study Group of Japan indicated that the JIS scoring system was more discriminative than Japanese TNM. However, a separate trend of Kaplan-Meier survival curves between JIS scores 1 and 2 was not obvious. Hence, JIS shows some limitations in predicting prognosis.

However, the manuscript has the following limitations: First, it is a retrospective study. In this retrospective analysis, we only consider the different clinical stage, not fully consider all possible confounding factors that potentially impact on patients’ overall survival, such as other treatment methods before or after radiotherapy. But, we think that it does not badly affect our results. Take Okuda staging system for example, total 88 HCC patients received transcatheter arterial chemoembolization (TACE), the proportion of patients received TACE is balanced between Okuda stage 1 and stage 2 (p = 0.757). Besides radiotherapy or TACE, a few patients have received the biotherapy and other treatment. The diversity of treatments may introduce unpredictable confounding factors. Additionally, only Child-Pugh A HCC patients were included in this study, which further limits the representativeness of the conclusion. In fact, all of the C-index were too small, with limited value, it well proved that the existing staging systems for liver cancer are flawed, and need to be improved.

Between April 1999 and March 2012, 249 eligible liver cancer patients who had not undergone curative resection were identified from the patient files of the Cancer Hospital of Guangxi Medical University and were included in the study. Patients with HCC were diagnosed based on the clinical diagnostic criteria proposed by the Chinese Society of Liver Cancer and the Chinese Anti-Cancer Association (CACA) in 2011 [28] or based on a pathologic diagnosis. Patients with primary HCC received radiotherapy using the three-dimensional conformal radiation therapy (3-DCRT) technique as the main treatment approach were included. Total dose of RT should be more than 30 Gy, Fraction dose of RT should not be less than 1.8 Gy/fraction. Patients with cirrhosis of the liver have been identified as being an independent risk for HCC, and HCC is the principal cause of death in patients with cirrhosis [29, 30], so liver cancer patients with cirrhosis were included in the study. The Child-Pugh Grade was also an independent prognostic factor for HCC [4]. We only included HCC patients with Child-Pugh Grade A in our study, considering the potential influence of the Child-Pugh Grade [31]. Whether Child-Pugh Grade B patients can accept radiation therapy is controversial, Child-Pugh Grade C is not suitable for radiotherapy. Thus, Child-Pugh Grade B and Child-Pugh Grade C HCC patients were excluded. Patients with extrahepatic metastasis were excluded. This study was approved by the Institutional Review Board of Cancer Hospital of Guangxi Medical University, which waived the requirement for informed consent. The abstract of this paper was presented as a poster at the American Society for Radiation Oncology 56th Annual Meeting, October 28-31, 2012, in Boston, Massachusetts.

Tumor morphology was determined based on computerized tomography (CT). Vascular invasion was assessed using dynamic CT and angiography. The maximum diameter of the tumor was measured using CT or ultrasonography. Lymph node metastasis and distant metastases were assessed using conventional anatomic imaging, such as ultrasound, dynamic CT scans and X-rays.

All patents underwent a planning CT scan to facilitate three-dimensional treatment planning using the Topslane planning system (Topslane Medical Corp., Shanghai, China) or the Precise planning system (Elekta Corp., Sweden). The gross volumes (GTV) were defined as the radiographically abnormal areas presented on the diagnostic CT and/or magnetic resonance imaging. The planning target volume (PTV) was defined by adding 0.5-1.5 cm to GTV. Liver motion was considered, with additional margins added to account for motion. The fraction sizes and total doses were determined based on the individual physician’s professional judgment.

Patients were followed up every 3 months for 1 year and then every 6 months after treatment until death or the termination of this study (March 2016). The date of death was obtained from either patient records or death registers or family dependents. In patients with local recurrences of the primary lesion or with development of new lesions, a new treatment strategy was usually planned and performed. Length of survival was calculated from the date when the radiotherapy commenced.

13. Investigators TCotLIPC. Prospective validation of the CLIP score: a new prognostic system for patients with cirrhosis and hepatocellular carcinoma. The Cancer of the Liver Italian Program (CLIP) Investigators. Hepatology. 2000; 31:840-845.

28. The Chinese Society of Liver Cancer and the Chinese Anti-Cancer Association. The clinical diagnosis and staging criteria of PLC. Chinese J Clin Oncol. 2011; 10:929-946.