* Xiaoliang Zhao and Xiaohua Wen contributed equally to this work

Clinicopathological characteristics of the patients with metastatic lung tumors are shown in Table 1. Of the 42 patients, 25 were males and 17 were females. Ages were 14 to 78 years, with a mean age of 51 years. Before surgery, most (34) of the patients had no marked clinical symptoms, and the remainder (8) of the patients had nonspecific symptoms, including cough, expectoration, and chest distress. Most of the patients were diagnosed with metastatic lung tumors from regular chest X-rays or CT follow-up after treatment for primary tumors in other organs. Of the 42 patients, 35 received thoracotomy and 7 received thoracoscopic surgery (17 received simple metastasectomy and 25 received lobectomy). 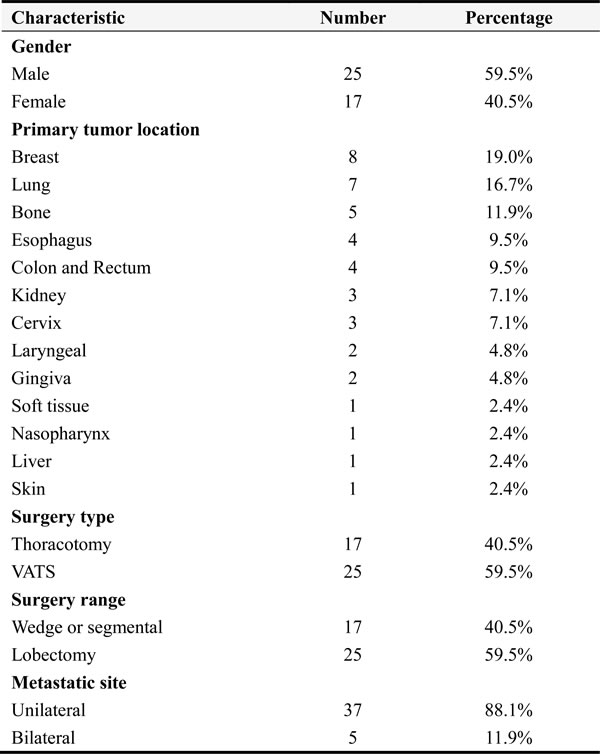 Table 2: Multivariate analysis for prognostic factors in the patients who underwent surgery for first pulmonary metastases 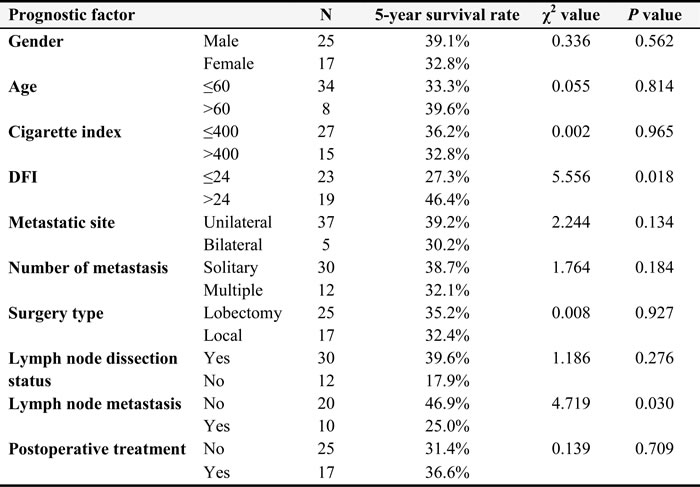 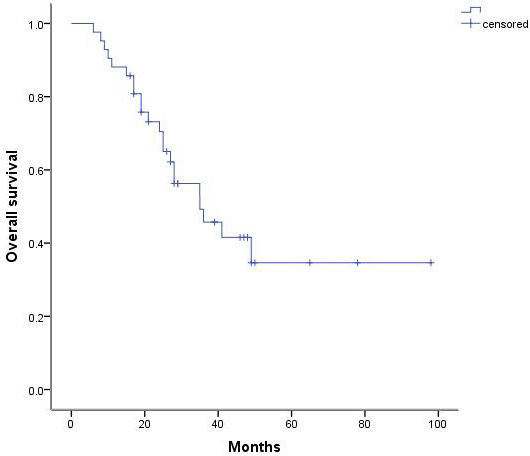 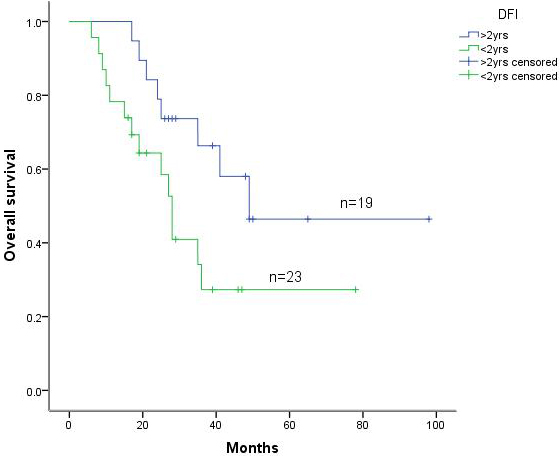 Figure 2: Kaplan-Meier survival curve of patients with lung metastatic tumors according to DFI. 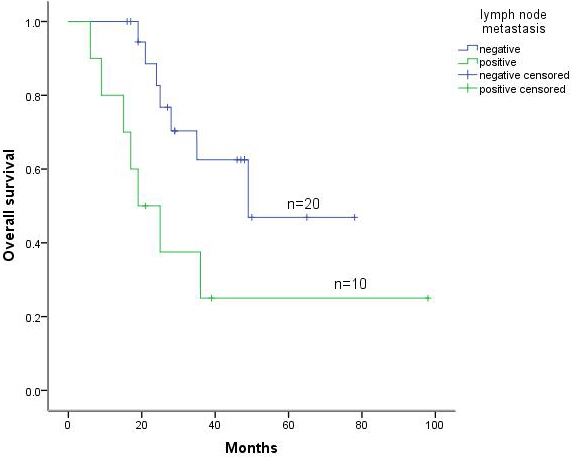 Similarly, among patients with metastatic lung tumors who received surgical treatment in the present study, the 3-year and 5-year overall survival rates were 45.7% and 34.6%, respectively, which were much higher than the postoperative survival rates for stage IIIA non-small cell lung cancer (NSCLC). Usually, the 3-year overall survival rate for stage IIIA NSCLC is approximately 24.9% to 33% [6-8]. Therefore, for patients with metastatic lung tumors whose primary tumors have been clinically cured, particularly those with unilateral lung metastases, active surgical treatment might be desirable if the patients’ conditions permit.

From use of either univariate or multivariate analyses (Figures 2 and 3), and generally consistent with previous reports [9, 10], DFIs were reported as important prognostic factors, based on the assumption that DFIs could be correlated with the intensity of the oncogenic factors and the TDTs. The DFI is therefore regarded as an indirect indicator of tumor growth, and longer DFIs usually indicate longer TDTs, which subsequently result in slower tumor progression and longer patient survival [11]. Therefore, better surgical effects for metastatic lung tumors might be achieved for intrapulmonary metastases occurring after effective control of the primary tumors.

Our results are not consistent with previous reports that assume postoperative auxiliary therapy can improve the prognoses of patients with metastatic lung tumors [17]. Our results, showing 5-year overall survival rates of 31.4% and 36.6% without and with postoperative treatment, respectively, indicate only a weak relation between postoperative chemotherapy or radiotherapy and overall survival.

We expected that the conflicting conclusions might be because most patients who received postoperative auxiliary radio/chemotherapy had diseases sensitive to radio/chemotherapy, such as colon carcinomas and breast cancer, whereas those who did not receive radio/chemotherapy had sarcomas or other special types of cancer. In addition, patients who experience substantial variability in biological behavior because of different tumor types, as well as receive postoperative auxiliary therapy, may have varied survival rates compared with patients with metastatic lung tumors.

Our results also indicated no significant difference in the effects of surgical resection between the 12 patients with unilateral or bilateral multiple metastatic lung tumors and the 30 patients with solitary unilateral metastatic lung tumors. By following the patients who died after surgery from multiple lung metastases, we noticed that most of these patients also had metastases to other organs, including bone, liver, and brain. Therefore, for patients with unilateral or bilateral multiple intrapulmonary metastatic tumors, a thorough understanding of the surgical indications is required, and more thorough and accurate examinations of other organs are essential before surgery.

Surgical treatment whenever possible for unilateral or bilateral multiple lung metastases might be reasonable, if extrapulmonary metastases are excluded. Furthermore, Patel et al [21] and McCormack and Ginsberg [22] described how among 448 patients receiving surgical treatment for metastatic lung tumors, 663 thoractomies were performed, including in 2 patients who received as many as 10 thoracotomies, thus suggesting that repeated thoracotomic resections should be allowed for patients with recurrent metastatic lung tumors.

The complete clinical records of 42 metastatic lung tumor patients who received surgical treatment from January 2000 to January 2014 in Tianjin Medical University Cancer Institute and Hospital (Tianjin, China) were selected for use in this study.

None of the 42 patients died perioperatively. After surgery, all patients were strictly followed and given systemic chemotherapy, radiotherapy, or biotherapy, depending on their pathological types. Postoperative survival (in months) was recorded normatively, and any patients lost to follow-up were calculated as deaths. All the patients were followed for 6 to 98 months.

All data were processed by SPSS v19.0 software (SPSS Inc., Chicago, IL). The endpoint evaluated for all the patients was patient survival from the date of operation. Data from patients lost to follow-up were censored at the date of the last observation. The overall survival rate was calculated by the Kaplan-Meier method, and univariate and multivariate analyses were performed for the relevant prognostic and survival factors. The survival curves were estimated by the Kaplan-Meier method and compared statistically by the log-rank test. The Cox proportional hazards model was used for multivariate analysis to investigate the effects of these factors on postoperative survival.

The authors declared no competing interests.

This work was supported by the National Key Clinical Specialist Construction Programs of China and by grants from the National Nature Science Foundation of China (81470137) and the Tianjin Science and Technology Major Project, P.R. China (12ZCDZSY15400) and National Key Research and Development Program of China (2016YFC0905501).