A novel assay to detect calreticulin mutations in myeloproliferative neoplasms

The myeloproliferative neoplasms are chronic myeloid cancers divided in Philadelphia positive (Ph+), chronic myeloid leukemia, or negative: polycythemia vera (PV) essential thrombocythemia (ET), and primary myelofibrosis (PMF). Most Ph negative cases have an activating JAK2 or MPL mutation. Recently, somatic mutations in the calreticulin gene (CALR) were detected in 56–88% of JAK2/MPL-negative patients affected by ET or PMF. The most frequent mutations in CARL gene are type-1 and 2. Currently, CALR mutations are evaluated by sanger sequencing. The evaluation of CARL mutations increases the diagnostic accuracy in patients without other molecular markers and could represent a new therapeutic target for molecular drugs.

We developed a novel detection assay in order to identify type-1 and 2 CALR mutations by PNA directed PCR clamping. Seventy-five patients affected by myeloproliferative neoplasms and seven controls were examined by direct DNA sequencing and by PNA directed PCR clamping. The assay resulted to be more sensitive, specific and cheaper than sanger sequencing and it could be applied even in laboratory not equipped for more sophisticated analysis. Interestingly, we report here a case carrying both type 1 and type2 mutations in CALR gene.

The myeloproliferative neoplasms (MPN) are chronic myeloid cancers characterized by the overproduction of mature blood cells and risk of transformation into acute myeloid leukaemia (AML) [1, 2]. In addition to chronic myeloid leukaemia (CML) characterized by the BCR-ABL fusion gene, the three most common myeloproliferative neoplasms are essential thrombocythemia (ET), polycythemia vera (PV), and primary myelofibrosis (PMF). In 2005 the JAK2 V617F mutation has been identified in patients with PV, ET and PMF [3, 4]. Mutations of JAK2 exon 12 [5, 6] and MPL exon 10 [7] were subsequently detected in a subsets of patients. Recently, several studies identified additional mutations present in smaller fraction of patients [8–12]. In 2013, somatic mutations in the CALR gene, encoding calreticulin, were detected in most patients with ET or PMF without mutations in JAK2 and MPL genes [13, 14].

Calreticulin is a protein with different functions. In the endoplasmic reticulum the protein modulates calcium homeostasis and regulates the folding of glycoproteins. [15] Calreticulin is also localized in other cellular compartments where it regulates many biological functions including apoptosis and proliferation. [16]. All mutant CALR proteins discovered until now share a novel amino acid sequence at the C-terminal. The non-mutant CALR C-terminal is mainly negatively charged, whereas the mutant CALR C-terminal is largely positively charged [17]. The mutant CALR protein lacks the endoplasmic reticulum retention signal (KDEL) and therefore it may have an altered subcellular localization. The role of CALR in the pathogenesis of MPN is largely unknown. Klampfl and colleagues and Nangalia and colleagues [13, 14] elegantly demonstrated that CALR mutations are acquired early in the major clone. Several studies are trying to shed light on how mutant CALR can sustain the uncontrolled proliferation. It was demonstrated that mutant CALR activates JAK/STAT signaling thus generating a proliferative signaling [13, 14]. Recently, it was shown that the forced expression of mutant CALR in hematopoietic cell lines resulted in MPL-dependent activation of MAPK signaling. In line whit this finding, patients with CALR mutations showed increased MAPK activity in blood cells and in CD34+ cells leading to enhance megakaryopoiesis and pro-platelet production. [18] Recently it was also shown the IL3 independent growth of CALR mutant cells [17].

CALR mutations have been reported as mutually exclusive with JAK2 and MPL mutations and are present in a percentage of patients ranging from 56 to 88% of JAK2/MPL-negative cases [13, 14]. A recent paper reported a patient who carried simultaneously both mutations, JAK2 V617F and CALR exon 9 [19]. Many different CALR mutations have been described in exon 9 but the most frequent is type-1 [L367fs*46; deletion of 52 base pairs (bp)] and type-2 [K385fs*47; insertion of 5 bp] [13, 14]. Currently, the method commonly exploited for the detection of CARL mutations is sanger sequencing.

Peptide nucleic acid (PNA) is able to hybridize very specifically to DNA. It is recognized that the binding PNA/DNA is more stable than DNA/DNA or DNA/RNA duplexes [20, 21], but PNA sequences cannot be extended by polymerase [22]. Consequently, PNA/DNA duplex suppresses DNA amplification. This is the principle that allowed to design PNA directed PCR clamping to discriminate wild type from mutated sequences [22–24].

The goal of the study was to make the diagnosis of CALR mutations more rapid, easy and accessible.

Based on this premise, we developed a novel and sensitive assay based on PNA directed PCR clamping for the detection of CALR mutations (type-1 and type-2) in MPN patients.

As show in Figure 1, the method described here forecasts that both PNA probe and PCR primer competitor target sites overlap, thus leading to a direct competition towards complementary DNA. In case CALR sequence is wild type, a perfect matching occurs between PNA (designed on wild sequence) and DNA. As a consequence, the PNA-template hybridization is favoured and DNA amplification is strongly suppressed. This occurs in patients with CALR wild-type (WT) or CALR type-1 mutation (DEL), producing weak bands at different lengths. 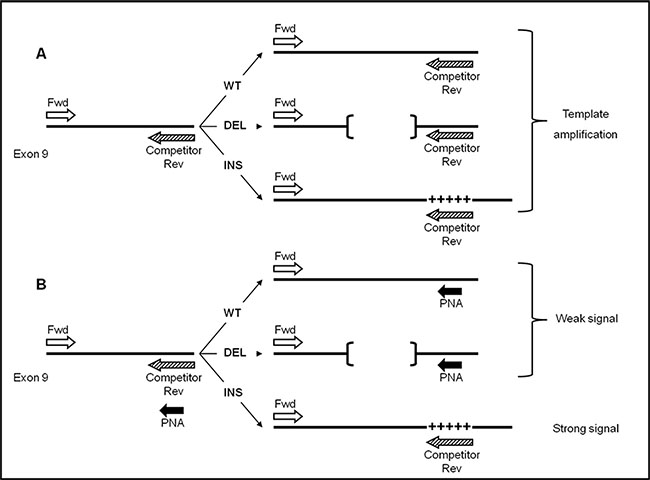 The lengths of the bands allow to distinguish between CALR WT and DEL (Figure 2B). Conversely, a non-perfect matching ( as in case of a mutation) destabilizes the PNA hybridization thus favouring the hybridization between template and primer competitor. In this case an amplification product is evident. (as in the case of patients with CALR type-2 mutation (INS)) (Figure 2B). 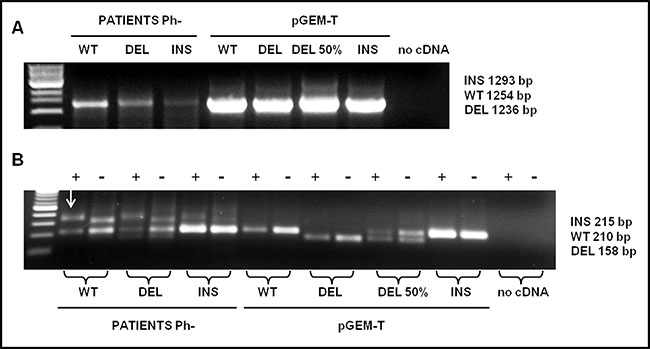 There are two PCR steps. Through the first step, the selected CALR sequence is amplified (Figure 2A). The second step is carried-out in duplicate, in the presence (+) or in the absence (-) of the PNA probe. The final result should be interpreted by reading the double loading for each individual patient (Figure 2B).

Seventy-five patients affected by MPN and seven controls were examined in double blind either by direct DNA sequencing or by PNA directed PCR clamping, displaying identical readout except for two samples: mutated (type-1 mutation) in PNA directed PCR clamping, but wild-type by sanger sequencing. For these patients, the experiment was repeated and the shorter bands, resulting by step II of PNA directed PCR clamping, were purified and cloned in pGEM-T Easy Vector as previously described. Then, they were sequenced by sanger method using T7 and SP6 primers (respectively #Q5021 e #Q5011, Promega, Milan, Italy): one of these resulted wild-type and represents the only false positive sample tested; unexpectedly, the second one was found to have both the CALR type-1 and 2 mutations (Figure 4).

Figure 4: Sequencing chromatogram of patient with both CARL type-1 and 2 mutations compared with WT sequence. CALR type-1 mutation is indicated in blue, while CALR type-2 is highlighted in red.

The majority of Ph- myeloproliferative neoplasms shows mutations in JAK2 or MPL genes. Recently, additional mutations were identified in ET and PMF wild-type for JAK2 and MPL. We developed a novel molecular assay, based on PNA direct PCR clamping, for a rapid diagnosis of CALR type-1 and 2 mutations in patients affected by MPN. The assay shows high efficiency, sensitivity and specificity. Our method appears to be faster, cheaper and easily interpretable compared with DNA sanger sequencing, the method most commonly used for the detections of these mutations. In clinical practice, the evaluation of CARL mutations increases the diagnostic accuracy of ET and PMF and allows a more accurate diagnosis in patients without other molecular markers. Greater accuracy of diagnosis can result in a more precise prediction of prognosis and in a more effective therapeutic choice [25, 26]. Furthermore, the mutated protein CALR could represent a new therapeutic target for molecular drugs [25]. Contrary to JAK2 V617F mutation, a correlation between CALR mutant allele quantification and clinical presentation has not yet been demonstrated [27]. Despite the sanger sequencing is the most commonly method used to diagnose these mutations, many laboratories in the world are not equipped with such a facility or cannot effort the cost of this procedure. In conclusion, considering the diagnostic relevance of the CALR mutations, the PNA direct PCR clamping assay might represent a good alternative method for the detection of CALR type-1 and type-2 mutations, especially considering the costs and the lower sensitivity of the DNA sequencing method. Furthermore, because this assay is faster, more sensitive, and less expensive than sanger sequencing, it might be applied also in laboratory not equipped for sophisticated analysis, reducing costs and time for an advanced molecular diagnosis.

After informed consent, peripheral blood were collected at diagnosis from 82 patients: 75 patients affected by myeloproliferative disease and 7 controls (5 healthy donors and 2 patients affected by myelodysplastic syndromes). The study was approved by the ethic committee on December 16th 2015 (number of approval 212/2015). Table 1 summarizes clinical and molecular characteristics of patients.

Table 2: Primers sequences used for cloning and for sanger sequencing

Capillary sanger sequence method for the detection of CALR

Step II: 1μL of step I PCR product was used to amplify a small area of CALR gene, containing type-1 and type-2 mutations. PCR amplification was carried-out in absence (−) or in presence (+) of PNA probe, at a concentration 6 × greater than primer Competitor Rev. The amplification performed without (−) PNA probe represents an internal positive control displaying the PCR efficiency.

Primers and PNA probe sequences were as follow (step II):

Reaction volume was 50 μL and he final concentrations of the reagents were the following:

Diagnostic test valuation with a confidence interval (CI) of 95% and the area under the curve (AUC) were calculated with MedCalc software (MedCalc, Osten, Belgium).

The second step of this assay has been patented by the authors and by the University of Turin (patent pending, number 102016000042586).

DC was funded by grants from: AIRC, MURST-COFIN,. The study was partially funded by a special grant from “AIRC 5 per mille” to the AGIMM group (AIRC-Gruppo Italiano Malattie Mileoproliferative); for a complete list of AGIMM investigators see at http://www.progettoagimm.it.

VR is a fellow of Compagnia di San Paolo.

JP is a fellow of Gigi Ghirotti Foundation.

25. Tefferi A, Thiele J, Vannucchi AM, Barbui T. An overview on CALR and CSF3R mutations and a proposal for revision of WHO diagnostic criteria for myeloproliferative neoplasms. Leukemia. 2014; 28:1407–1413.