Idelalisib, also known as CAL-101 and GS-1101, is the first-in class phosphatidylinositol 3 kinase delta (PI3Kδ) inhibitor, a cytoplasmic tyrosine kinase involved in a number of signaling pathways within B-cells [1]. Idelalisib is approved as a single agent or combined with rituximab (Rituxan) to treat patients with follicular lymphoma, small lymphocytic lymphoma, and relapsed chronic lymphocytic leukemia (CLL) [2–4]. However, idelalisib has a boxed warning regarding serious hepatotoxicity, diarrhea, colitis, intestinal perforation [4, 5]. Idelalisib was found that effectively in CLL patients with p53 mutations who have high risk genetic profiles [4], a finding suggest that idelalisib can be examined at the early time in the course of treatment for patients with p53 deletion/mutations. However, the mechanisms underlying the cell autonomous effect of idelalisib such as cell killing in solid tumors is not well-understood.

PUMA, p53 upregulated modulator of apoptosis, belongs to BH3-only Bcl-2 family, which play a key role in apoptosis in cancer cells [6, 7]. PUMA is a critical mediator of p53-dependent and p53-independent apoptosis in a variety of cancer cell and mice [7, 8]. DNA damage agents such as γ-irradiation, common chemotherapeutic drugs such as 5-fluorouracil (5-FU), induce p53 mediated PUMA induction and apoptosis [9]. The p53-independent manners of PUMA induction by these stimuli is regulated by the transcription factor such as FoxO3a, p73, STAT1, E2F1, or NF-κB, respectively [10–14]. In cancer cells, PUMA induces apoptosis through interact with anti-apoptotic Bcl-2 family members such as Bcl-XL/Bcl-2, which activates the pro-apoptotic members Bax/Bak, resulting in mitochondrial dysfunction and activation of the caspase cascade [6, 15]. 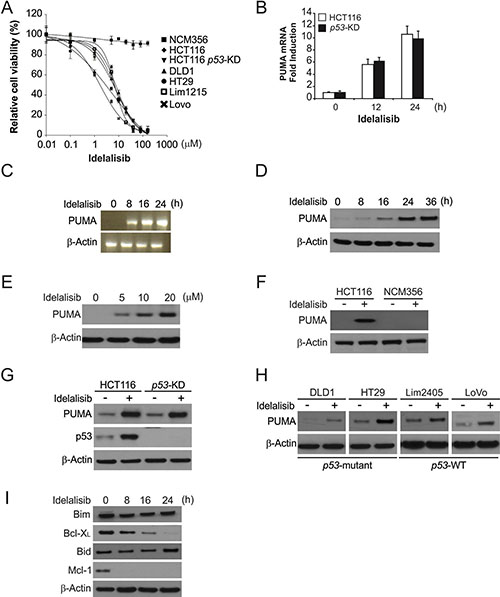 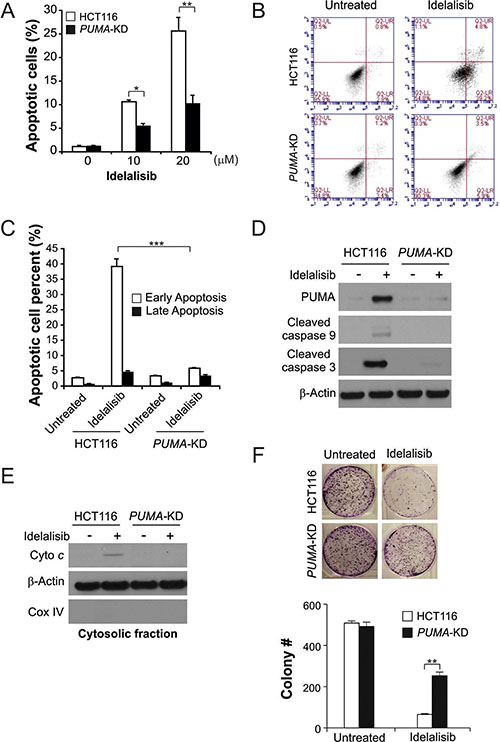 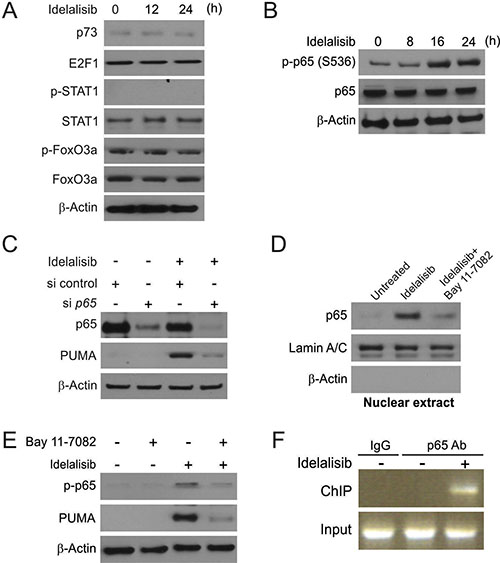 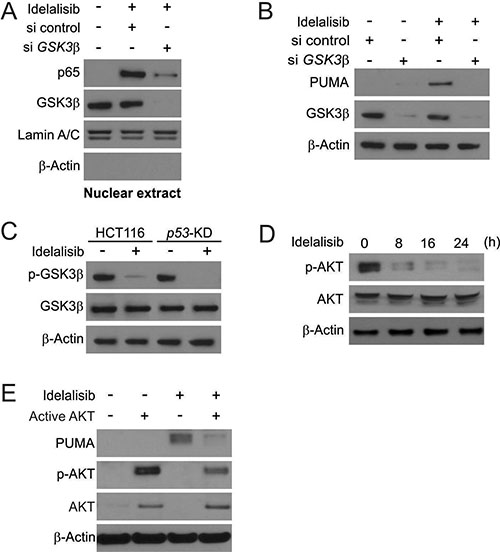 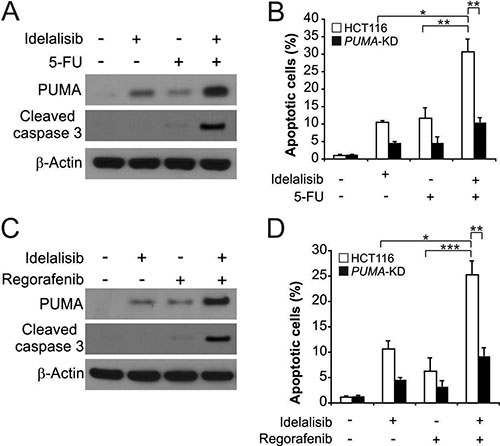 Next, we determined whether PUMA-mediated apoptosis is necessary for the antitumor activates of idelalisib in a xenograft model. We established xenograft tumors with parental and PUMA-KD HCT116 cells in nude mice. Then tumor-bearing mice were treated with 30 mg/kg idelalisib or the vehicle for 10 days by oral gavage, and tumor volumes were determined every 2 days. This dose of the idelalisib did not significantly lower body weight (Figure 6A), although the mice tended to gain less weight than the control mice. Parental and PUMA-KD tumors without treatment were not significantly different in growth (Figure 6B and 6C). The growth of parental tumor was suppressed by 80–90% following idelalisib treatment (Figure 6A and 6B). In contrast, compared to parental, PUMA-KD tumors were significantly led to less growth inhibition in response to idelalisib treatment (Figure 6B and 6C), indicating that loss of PUMA abrogated the antitumor effect of idelalisib. PUMA and p65 phosphorylation were increased by idelalisib in xenograft tumors (Figure 6D). TUNEL and cleaved-caspase 3 staining results indicated that significant apoptosis induction in idelalisib-treated parental tumors. However, less positive TUNEL and cleaved-caspase 3 staining were detected in the PUMA-KD tumors treated with idelalisib (Figure 6E and 6F). Thus, these data showed that NF-κB/PUMA axis play a key role in the antitumor and apoptotic activities of idelalisib in vivo. 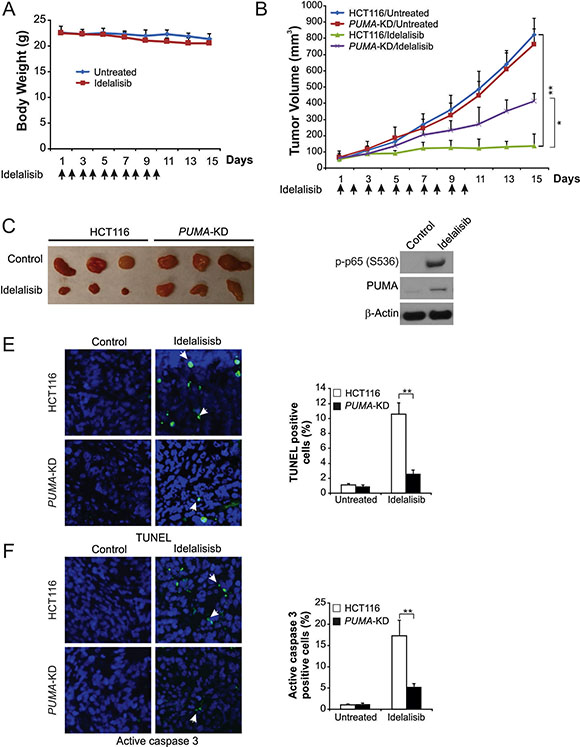 Figure 6: PUMA mediates the antitumor effects of idelalisib in a xenograft model. (A) Nude mice were treated with 30 mg/kg idelalisib for 10 consecutive days. Body weight at indicated time points was measured. Arrows indicate idelalisib injection. (B) Nude mice were injected s.c. with 4 × 106 parental and PUMA-KD HCT116 cells. After 1 week, mice were treated with 30 mg/kg idelalisib or buffer for 10 consecutive days. Tumor volume at indicated time points after treatment was calculated and plotted (n = 6 in each group). Arrows indicate idelalisib injection. (C) Representative tumors at the end of the experiment in (B). (D) Parental HCT116 xenograft tumors were treated with 30 mg/kg idelalisib or the control buffer as in (B) for 4 consecutive days. p-p65 (S536) and PUMA in representative tumors were analyzed by Western blotting. (E) Paraffin-embedded sections of tumor tissues from mice treated as in (B) were analyzed by TUNEL staining. Left, representative TUNEL staining pictures; Right, TUNEL-positive cells were counted and plotted. (F) Tissue sections from (E) were analyzed by active caspase 3 staining. Left, representative staining pictures; Right, active caspase 3-positive cells were counted and plotted. Results of (B), (E) and (F) were expressed as means ± SD of 3 independent experiments. **P < 0.01; *P < 0.05.

Colorectal cancer (CRC) is the most common malignancy with the third largest incidence and mortality among all diagnosed cancers in the worldwide [24]. About 20 to 30% of patients with CRC present metastases when the disease was diagnosis. Moreover, for the remind patients, about 50 to 60% will develop metastases [25]. Right now, CRC accompanied with higher mortality, because of CRC is frequently diagnosed in the advanced stage without reliable biomarkers [26]. Traditional chemotherapy for CRC treatment involves combinations of cytotoxic drugs such as 5-FU, oxaliplatin and irinotecan, and has limited efficacy and substantial side effects due to lack of specificity [27]. Developing of targeted anticancer agents has significantly improved efficacy of chemotherapy against CRC. Idelalisib is a first in class, delta isoform specific, PI3-kinase inhibitor3. Idelalisib targets malignant B-cell proliferation, survival, migration and homing to lymphoid tissues through multiple mechanisms [2, 28, 29]. In the current study, we detected the effect of idelalisib on colon cancer cells. Our results demonstrate for the first time that the therapeutic effect of idelalisib is at least in part mediated by the cell autonomous process of apoptosis induction, progressing from AKT inhibition, GSK3β activation, and p65 nuclear translocation, leading to PUMA induction and onset of mitochondria-dependent apoptosis. p65 not only mediates PUMA induction and apoptotic response to idelalisib, but also is responsible for PUMA-dependent apoptosis induced by aurora kinase inhibitors [17] and regorafenib [16]. In addition to PUMA induction, depletion of Mcl-1 is an early event following idelalisib treatment (Figure 1E), and may also contribute to apoptosis induction [30, 31].

In the present study, idelalisib induces PUMA expression through GSK-3β/NF-κB pathway following AKT inhibition and initiates apoptosis through the intrinsic apoptosis pathway in colon cancer cells. PUMA induction plays a key role in apoptosis in response to varieties chemotherapeutic agents, and is likely to be a useful indicator of chemo sensitivity. Previously reports showed that PUMA induction matches to differential sensitivity to EGFR TKIs, and loss of PUMA induction is associated with insensitive to EGFR TKIs [12, 32]. Furthermore, a recent study demonstrated that response of isolated mitochondria from tumor cells to a peptide containing the Bcl-2 homology 3 (BH3) domains of PUMA correlates with chemotherapy response in patients [33]. The results of the current study suggested that we can check PUMA expression as a biomarker to predict the antitumor effect of idelalisib in colon cancer cells. Although it is hard to get biopsies from colorectal tumors treated with chemotherapy after surgery, it could be possible to detect PUMA induction using non-invasive approaches, such as analysis of circulating tumor cells [34].

In conclusion, our results demonstrated a novel antitumor mechanism of idelalisib through PUMA-mediated apoptosis in a p53-independent pathway. Idelalisib-induced PUMA expression change may functions as a biomarker for its clinical trials, and can help important implications for the future development and application.

Indicated cell lines were seeded in 96-well plates at a density of 1×104 cells/well. After overnight incubation, various concentrations of idelalisib were added into wells and incubated for additional 72 hr. 3-(4,5-dimethylthiazol-2-yl)-5-(3-carboxymethoxyphenyl)-2-(4-sulfophenyl)-2H-tetrazolium (MTS) assay was performed using the MTS assay kit (Promega) according to the manufacturer’s instructions. Luminescence was measured with a Wallac Victor 1420 Multilabel Counter (Perkin Elmer). Each assay was conducted in triplicate and repeated three times.

Total RNA was extracted using the TRIzol RNA Kit (Invitrogen, CA, USA) according to the manufacturer’s protocol. One μg of total RNA was used to generate cDNA using SuperScript II reverse transcriptase (Invitrogen). PCR was performed in triplicate using SsoFasrTM Probes Supermix (Bio-Rad) in a final reaction volume of 20 μL with gene-specific primer/probe sets, and a standard thermal cycling procedure (35 cycles) on a Bio-Rad CFX96TM Real-time PCR System. PUMA and β-actin levels were assessed using TaqMan Gene Expression Real-Time PCR assays. Result was expressed as the threshold cycle (Ct). The relative quantification of the target transcripts was determined by the comparative Ct method (ΔΔCt) according to the manufacturer’s protocol. The 2-ΔΔCt method was used to analyze the relative changes in gene expression. Control experiments were conducted without reverse transcription to confirm that the total RNA was not contaminated with genomic DNA. β-actin was used as an internal control gene in order to normalize.

Apoptosis was analyzed by nuclear staining with Hoechst 33258 (Invitrogen) [38]. Annexin V/propidium iodide (PI) staining was performed using annexin-Alexa 488 (Invitrogen) and PI. For analysis of cytochrome c release, cytosolic fractions were isolated by differential centrifugation, and probed by Western Blotting for cytochrome c. For Colony formation assays, the treated cells were plated in 12-well plates at appropriate dilutions and allowing for cell growth for 10 days, followed by crystal violet staining of cell colonies.

Cells were transfected with Lipofectamine 2000 (Invitrogen) according to the manufacturer’s instructions. Knockdown experiments were performed 24 hours prior to idelalisib treatment using 300 pmole of siRNA. The control scrambled siRNA and siRNA for human p65 (sc-29410), and GSK3β (sc-35527) were from Santa Cruz Biotechnology. For stable transfection a shRNA-expressing plasmid that containing the p53-targeting sequence (CACCATCCACTACAACTACAT) [39], PUMA- targeting sequence (CCTGGAGGGTCATGTACAATCTC TT) [40], or a vector containing a scrambled sequence was transfected into HCT116 cells, followed transfection, cells were plated in 96-well plates in the presence of 5 μg/mL puromycin. The protein expression of puromycin-resistant clones was then analyzed by western blotting.

HCT116 cells were pre-treated with BAY11-7082 or GSK-3β knockdown, and then subjected to idelalisib treatment for another 6 hours. Nuclear fractionation was used to analyze NF-κB nuclear translocation. Nuclear extracts were isolated from cells using the NE-PER nuclear/cytoplasmic extraction kit (Thermo Fisher) according to the manufacturer’s instructions, and analyzed by p65 Western blotting.

All animal experiments were performed according to the related ethics regulations of Liaoning University of Traditional Chinese Medicine. HCT116 cells were harvested, and 4 × 106 cells in 0.2 mL of medium were implanted subcutaneously on the back of athymic nude female mice. After tumor growth for 7 days, mice were treated with daily with idelalisib at 30 mg/kg by oral gavage for 10 consecutive days. Tumor growth was monitored by calipers, and tumor volumes were calculated according to the formula ½ × length × width2. Mice were euthanized when tumors reached ~1.0 cm3 in size. Tumors were dissected and fixed in 10% formalin and embedded in paraffin. TUNEL and active caspase 3 immunostaining was performed on 5 μM paraffin-embedded tumor sections, by using an AlexaFluor 488-conjugated secondary antibody (Invitrogen) for signal detection.

Statistical analyses were carried out using GraphPad Prism IV software. P values were calculated by the student’s t-test and were considered significant if p < 0.05. The means ± one standard deviation (s.d.) is displayed in the figures.

We thank our lab members for critical reading. This research did not receive any specific grant from funding agencies in the public, commercial, or not-for-profit sectors.

The authors declare no conflicts of interest and all authors have agreed on the submission.

SY, ZZ, XZ and NZ conceived and performed the experiments. SY, ZZ and ZY analyzed the data and wrote the manuscript.