Methicillin-resistant Staphylococcus aureus isolates in a hospital of Shanghai

Staphylococcus aureus (S. aureus), a gram-positive coccal bacterium that belongs to the Firmicutes, was first identified in 1880 in Aberdeen, Scotland [1]. As high as 20% of the human population are long-term carriers of S. aureus which can be frequently found in the nose, respiratory tract, on the skin and in the lower reproductive tract of women [2]. Although S. aureus is an opportunistic pathogen, it is still one of the five most common causes of hospital-acquired infections and is often the cause of postsurgical wound infections [3, 4]. Infection caused by S. aureus range from minor skin injury to life-threatening diseases such as pneumonia, meningitis, osteomyelitis, endocarditis, toxic shock syndrome, bacteremia, and sepsis [2–6].

The formation of peptidoglycan cross-linkages provides the rigidity and strength in a bacterial cell wall [7]. During formation of the acyl-enzyme intermediate, a proton must be removed from the active site serine hydroxyl group and one must be added to the amine leaving group, in which process, DD-transpeptidase catalyzes proton transfer [8, 9]. Penicillin, an antibiotic derived from Penicillum fungus, can bind to the DD-transpeptidase to inhibit the enzyme’s functionality and hence blocked the formation of bacterial cell walls [10, 11]. Thus, penicillin has widely adopted in clinical treatment on S. aureus infection since the 1940s [12]. However, some S. aureus produce an altered penicillin-binding protein, PBP2a, which is encoded by mecA gene carried on a large mobile genetic element called the staphylococcal chromosomal cassette mec [10–12]. The variant penicillin-binding protein binds beta-lactams with lower avidity, which results in complete resistance to all beta-lactam antibiotics including the semi-synthetic penicillins [10–13]. From the early 1970s, penicillin resistance is common in most countries and this forced the physicians finally to abandon their belief that all bacterial infections were treatable if given the vast array of effective antimicrobial agents [14].

Many penicillin-resistant S. aureus strains remain susceptible to penicillinase-stable penicillins such as oxacillin and methicillin [15, 16]. Historically, strains that are oxacillin and methicillin resistant were termed methicillin-resistant S. aureus (MRSA) [17]. In principle, MRSA strains are resistant to all ß-lactam agents, including cephalosporins and carbapenems [15–17]. In clinical practice, MRSA strains are often multiply resistant to other commonly used antimicrobial agents, including erythromycin, clindamycin, fluoroquinolones and tetracycline [18]. Therefore, MRSA always cause healthcare-associated infections and become a great challenge for clinicians [15–18]]. Carriage rates for human MRSA strains in the general population range from less than 1% to 5% [19]. Healthcare workers are expected to be at an increased risk for colonization due to occupational exposure [20]. Therefore, hospital-associated MRSA is one of the most prevalent nosocomial pathogens worldwide [21]. On the other hand, different MRSA strains with unique phenotypes have emerged in the community in recent years, which provides a reservoir of community-associated MRSA to spread [21]. Both healthcare- and community-associated MRSA strains are likely to cause life-threatening systemic infections, especially in elderly individuals and children [21].

In addition, S. aureus might acquire new virulence via bacteriophages, e.g. Panton-Valentine leukocidin (PVL), a group ofβ-pore-forming cytolytic toxins, could be imparted by bacteriophages [22]. Infection of S. aureus with PVL gene causes leukocyte destruction and necrotizing pneumonia, an aggressive condition that usually kills patients within 72 hours [22]. Therefore, active surveillance is critical for S. aureus control and prevention, however, the reference data of S. aureus surveillance from China is very limited. In this report, specimens of patients, medical staff and hospital setting were randomly sampled in a level 2 hospital in Shanghai from September 2011 to August 2012. Isolation, cultivation and identification of S. aureus were performed.

The distribution of bacterial isolates in clinical samples

Table 1: The distribution of S. aureus isolates in clinical samples

The distribution of bacterial isolates in medical staff and hospital setting

Table 3: The distribution of S. aureus isolates in medical staff and hospital setting 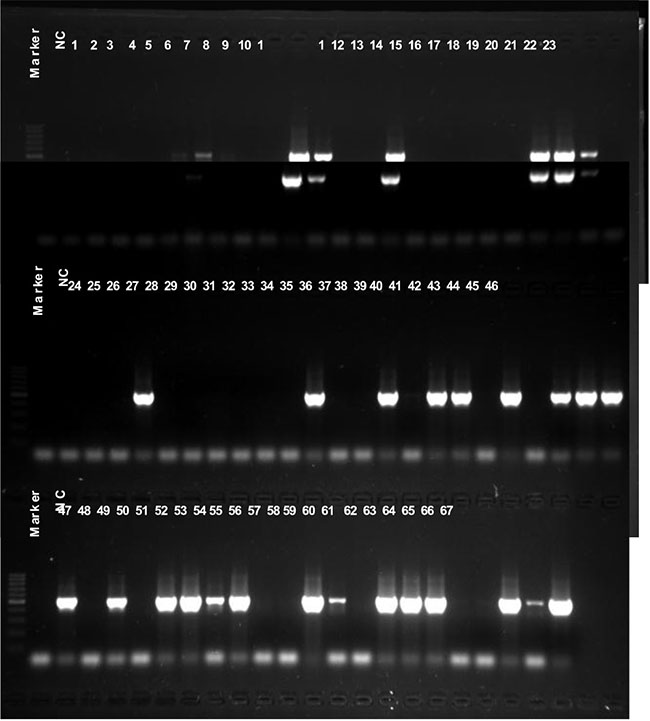 S. aureus are successful commensal pathogens in our body because they can adapt to selective pressures (e.g. use of antibiotics) rapidly via a number of mechanisms [22]. Among these mechanisms, mobile genetic elements (MGEs) play a central role in this adaptation process, because MGEs are a means to transfer genetic information among and within bacterial species and MGEs encode putative virulence factors that confer resistance to antibiotics [22]. MGEs mainly consist of chromosome cassettes, insertion sequences, transposons, pathogenicity islands, plasmids, phages and so on [22]. Staphylococcal cassette chromosomes (SCCs) are relatively large fragments of DNA that always insert into the orfX gene on the S. aureus chromosome [22]. SCCs of MRSA encode the methicillin resistance gene (mecA), therefore, MRSA poses a great threat to the control of clinical infection of S. aureus [15–18]. At present, in the case of limited effective antibiotics, active monitoring is the important means of MRSA control and prevention. In this report, to learn the distribution of MRSA in local hospital setting, specimens of patients (200 patients with 1119 specimens) as well as medical staff and hospital setting (1000 specimens) were randomly sampled in a level 2 hospital in Shanghai from September 2011 to August 2012. Totally, 67 S. aureus strains were isolated and 33 (49.3%) were MRSA. Of the 67 S. aureus strains, 32 were isolated from patient samples; 13 (40.6%) of the 32 S. aureus isolates were MRSA; sputum and patients of general internal medicine were the most frequent specimen and patient group for S. aureus strains isolation respectively. Remaining 35 S. aureus strains were isolated from the medical staff and hospital setting; 20 (57.1%) of the 35 S. aureus isolates were MRSA; specimens sampled from doctors and nurses’ hands and nose and hospital facilities were the most frequent specimen to isolate S. aureus. Although the detection rate of MRSA is lower than most reports [15–18], MRSA is widely prevalent in our patients and hospital setting. Thus, the potential health threat of MRSA is worthy of our attention.

The role of the PVL gene in virulence is still in dispute, some studies showed that presence of PVL is associated with increased virulence of certain strains of S. aureus [23, 24]. Infection of S. aureus with PVL causes leukocyte destruction and necrotizing pneumonia, an aggressive condition that usually kills patients within 72 hours [19, 21]. On the contrary, a recent systematic evaluation showed that PVL gene had not increased virulence of community-associated MRSA [25]. Even so, surveillance of virulent genes has the same importance as MRSA monitoring. In this study, 38 isolates were PVL gene positive and 17 (17/67, 25.4%) isolates were mecA and PVL genes dual positive. Our results indicate that the potential public health threat caused by PVL positive S. aureus infection can not be ignored.

To know the distribution of S. aureus in clinical samples, the sputum, throat, eye and hand swabs, wound secretion, blood and urine of patients in the general internal medicine, intensive care unit, complete rooming-in, department of gerontology and department of neurosurgery were collected in a local level 2 hospital of Shanghai (There are more than 300 hospitals distributed in the 16 administrative districts in Shanghai, the studied hospital is a center hospital of one district with bed number more than 1,000) from September 2011 to August 2012. The Random sampling rate for patients was 1:15. Finally, 1119 specimens from 200 patients were collected. To know the distribution of S. aureus in medical staff and hospital setting, 1000 swabs sampled from doctors and nurses’ hands and nose, desk and keyboard of clinic, medical instruments, nurse’s aides’ hands and nose and hospital facilities (bed, phone, door handles, faucets and toilet) were also collected at a random sampling rate of 1:10. Finally, 2119 samples were collected and applied for S. aureus isolation and culture.

This study was carried out following the rules of the World Medical Association Declaration of Helsinki and approved by the Internal Review Board at the Centers for Disease Control and Prevention of Shanghai. Written informed consent was obtained according to the guidelines of the National Ethics Regulation Committee. Participants, immediate relatives, caregivers, or legal guardians informed the participants of their right to withdraw consent.

This work was supported by the Natural Science Foundation of Minhang District, Shanghai (No. 2011MHZ50).

15. Chalmers JD, Reyes LF, Aliberti S, Restrepo MI. Empirical Coverage of MRSA in Community-Acquired Pneumonia: Those Who Do Not Remember the Past Are Doomed to Repeat it. Clin Infect Dis. 2016. pii: ciw464.