Lung cancer, the leading cause of cancer-related death in most countries, has been increasing rapidly in China for the last three decades [1]. The risk of lung cancer is strongly associated with exposure to environmental carcinogens, in particular to cigarette smoke [2]. However, only approximately 10% of smokers ever develop lung cancer. This highlights the potential role of hereditary components in determining the risk of lung cancer [3]. Through genome-wide association studies (GWAS), a number of genes involved in lung carcinogenesis have been identified in populations of European descent. These include CHRNA5, CHRNA3 and CHRNA4 on chromosome 15q25.1 [4–6], (TERT-CLPTM1L) on 5p15.33 [7, 8], and (BAT3-MSH5) on 6p21.33 [7].

It was also learned from GWAS that inherited single nucleotide polymorphisms (SNPs) in telomere-related genes are associated with various malignancies [9]. Human telomeres, composed of a tandem hexanucleotide repeat (TTAGGG), are many kilobases long in newborns but shorten by an average of 20-40 base-pairs annually [10]. SNPs in the telomere-related gene ACYP2 are reproducibly associated with inter-individual variation in leukocyte telomere length (LTL) [11]. In addition, recent Mendelian randomization studies indicate that LTL-associated SNPs related to longer telomere lengths are associated with increased risk of adult glioma, melanoma and lung cancer [12].

a p was calculated using the chi-square test. 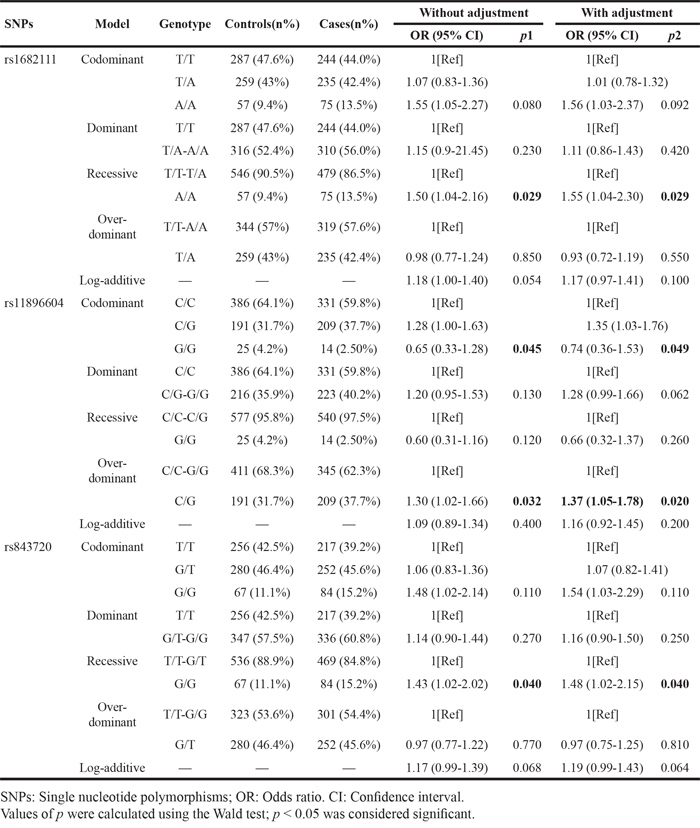 Finally, we also performed a Wald test using unconditional multivariate regression analysis to assess the associations between SNP haplotypes and lung cancer risk. However, no positive results were observed.

ACYP2, located on chromosome 2p16.2, encodes a small cytosolic enzyme acylphosphatase that catalyzes the dephosphorylation of phospho-enzyme intermediates of various membrane pumps, particularly the Ca2+/Mg2+-ATPase from sarcoplasmic reticulum of skeletal muscle [14]. The physiological function of ACYP2 is not yet completely clear, however. Vos et al. reported that the rs1872328 variant of ACYP2 was associated with cisplatin-induced ototoxicity in patients with osteosarcoma who did not receive potentially ototoxic cranial irradiation [15]. It was further suggested that severe oxaliplatin-induced chronic peripheral neurotoxicity was potentially associated with ACYP2 rs843748 [16]. A recent genome-wide meta-analysis showed that ACYP2 rs11125529 affects telomere length and coronary heart disease in the Chinese Han population [17]. In addition, Yongjun et al found that ACYP2 rs12615793 and rs11896604 may significantly decrease the risk of high-altitude pulmonary edema [18]. However, the mechanism by which ACYP2 contributes to lung cancer will need to be explored in future studies.

Although the present study has several strengths, it also has intrinsic limitations. First, we present no data on the relation between ACYP2 SNPs and the most influential lung cancer risk: smoking. Second, the size of our sample is relatively small. Finally, other factors such as BMI, bacterial and viral infection, marriage, and economic status were not taken into account. Those issues will be addressed in future studies, along with further characterization of the molecular mechanism underlying the association of ACYP2 SNPs and lung cancer and prospective studies to validate their clinical utility.

In sum, we have identified several novel associations between three SNPs in ACYP2 (rs1682111, rs11896604 and rs843720) and lung cancer in the Chinese Han population. Our findings suggest ACYP2 may be a useful marker that informs clinical decisions, and may shed light on new candidate genes and new ideas about the mechanism governing the occurrence of lung cancer.

We recruited 554 patients with lung cancer and 603 healthy controls for this study. The patients were treated at the First Affiliated Hospital of Xi’an Jiao Tong University between January 2014 and August 2016. All demographic and related clinical data, including residential region, age, ethnicity, and education status, were collected through a face-to-face questionnaire and review of medical records. Patients recently diagnosed with primary lung cancer (confirmed by histopathological analysis) were included. Patients with other types of cancers or who underwent radiotherapy or chemotherapy were excluded. The controls underwent annual health evaluations in the checkup centers affiliated with our institution. All control patients were in good health and had no history of cancer, and they had no blood relatives with lung cancer going back three generations. This research was performed in accordance with the Chinese Department of Health and Human Services regulations for the protection of human research subjects. We obtained informed consent from all of the participants, and the study protocols were approved by the Institutional Review Board of Xi’an Jiao Tong University.

Thirteen SNPs in ACYP2 that had a MAF >5% in the HapMap Asian population were selected for the association analysis [13, 14]. Venous blood samples (5 mL) were collected from each study participant during a laboratory examination. Blood samples from patients were collected prior to radiation or chemotherapy. DNA was extracted from whole blood samples using a Gold Mag-Mini Whole Blood Genomic DNA Purification Kit (GoldMag Ltd, Xian, China) and stored at –80°C after centrifugation. The DNA concentration was measured using spectrometry (DU530 UV/VIS spectrophotometer, Beckman Instruments, Fullerton, CA, USA). Sequenom MassARRAY Assay Design 3.0 software (Sequenom, Inc, San Diego, CA, USA) was used to design the multiplexed SNP Mass EXTEND assay, and genotyping was performed using a Sequenom MassARRAY RS1000 (Sequenom, Inc.) according to the manufacturer’s protocol. SequenomTyper 4.0 Software™ (Sequenom, Inc.) was used to manage and analyze the data. The primers corresponding to each SNP are shown in Table 4. Based on these results, the following 13 SNPs were selected: rs6713088, rs12621038, rs1682111, rs843752, rs10439478, rs843645, rs11125529, rs12615793, rs843711, rs11896604, rs843706, rs17045754 and rs843720. Basic information on the SNPs is shown in Table 2.

We used Chi-squared tests (categorical variables) and Student’s t-tests (continuous variables) to assess the differences in the demographic characteristics between the cases and controls. The Hardy-Weinberg equilibrium of each SNP was assessed in order to compare the expected frequencies of the genotypes in the control groups. All minor alleles were regarded as risk alleles for lung cancer susceptibility. To evaluate associations between each SNP and lung cancer risk in the five models (codominant, dominant, recessive, over-dominant and log-additive), ORs and 95% CIs were calculated using unconditional logistic regression analysis after adjusting for age, and gender. Linkage disequilibrium analysis and SNP haplotypes were analyzed using the Haploview software package (version 4.2) and the SHEsi software platform (http://www.nhgg.org/analysis/). All statistical analyses were performed using the SPSS version 17.0 statistical package (SPSS, Chicago, IL, USA) and Microsoft Excel. All statistical tests were two-sided, and values of p<0.05 was considered significant.

This work was supported by the Fundamental Research Funds for the Central University of China [No.08143004] and the Funds for Science and Technology Project of Shaanxi Province of China [No.2014K11-02-03-07]. The authors are also grateful to the patients and control individuals for their participation in the study. We thank the clinicians and hospital staff who contributed to sample and data collection for this study.