Echistatin, a cyclic RGD peptide, which is an antagonist of αvβ3 integrin (disintegrin), inhibited human osteosarcoma in the chick chorioallontoic membrane (CAM) model and tumor growth and pulmonary metastases in a nude mouse orthotopic model. A high-metastatic variant of human osteosarcoma, 143B-LM4, overexpressing αvβ3 integrin was used. Tumor angiogenesis by high-metastatic variant 143B-LM4 cells in the CAM was significantly inhibited by echistatin (P<0.05) as was overall growth. A doxorubicin (DOX)-echistatin combination inhibited orthotopic tumor growth compared to untreated control (P<0.01) or DOX alone (P<0.05) in nude mice. Tumor-bearing mice treated with the DOX-echistatin combination survived longer than those treated with DOX alone or control PBS (P<0.01 and P<0.01, respectively). Echistatin also inhibited experimental lung metastasis of 143B-LM4 cells in nude mice. These results suggest that DOX in combination with a disintegrin has potential to treat osteosarcoma and that αvβ3 integrin may be a target for osteosarcoma.

Osteosarcoma is a highly-metastatic cancer that is often fatal after failure of first-line chemotherapy [1]. Integrins are thought to play a major role in metastasis in this disease [2].

A high metastatic variant of 143B osteosarcoma cells (143B-LM4) was isolated in our laboratory by serial orthotopic passage and was found to overexpress αvβ3 integrin, compared to parental cells [2].

We therefore decided to target αvβ3 integrin as a potential improved therapy for osteosarcoma. Using the 143B-LM4 human osteosarcoma cell line, expressing RFP in the cytoplasm and GFP in the nucleus (143B-LM4-GEP-REP) (Figure 1), single cancer-cell seeding in the lung after i.v. injection in real time of osteosarcoma cells was imaged. Lung seeding by 143B-LM4 was greatly inhibited by the anti-β1 integrin monoclonal antibody, AIIB2. AIIB2 also significantly inhibited spontaneous lung metastasis and increased survival of mice with orthotopically-growing143B-RFP [2].

In the present study, we evaluated echistatin, targeting in combination with doxorubicin [4], against the 143B-LM4 cell line, in the chick embryo and in orthotopic and experimental-metastasis nude-mouse models.

Efficacy of echistatin on the 143B-LM4 in the chick embryo

Angiogenesis was initiated with fragments of the 143B-LM4 tumor implanted on the chorioallantoic membrane (CAM). After 24 hr, the embryos received a single inoculation of the echistatin or control PBS. Forty-eight hr after echistatin administration, tumor-induced angiogenesis by 143B-LM4 cells in the CAM was significantly inhibited by echistatin (P < 0.05) (Figure 2A, 2B). Tumor regression was also observed after treatment with echistatin compared to control PBS (Figure 2A, 2B). 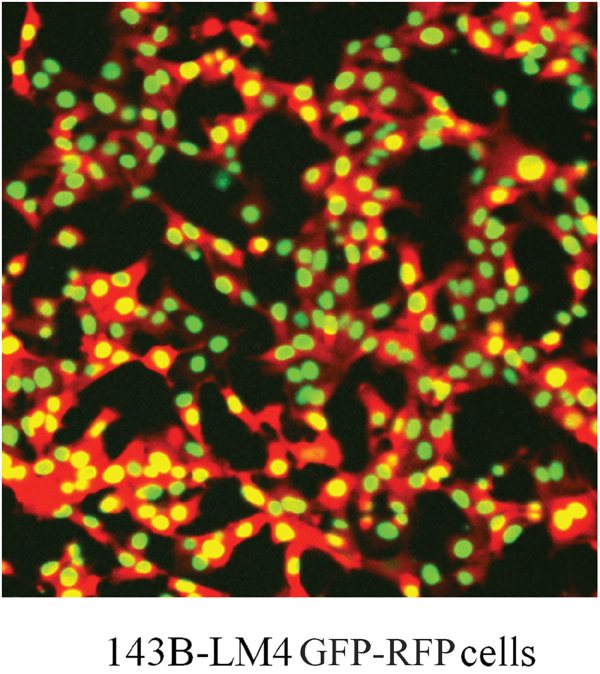 Figure 2: Efficacy of echistatin on tumor-induced angiogenesis and tumor growth in the chick chorioallantoic membrane (CAM). A. 143B-LM4-GEP-REP tumor fragments which grew on the CAM for 7 days were resected and implanted on another CAM which was treated with echistatin. Angiogenesis of the 143B-LM4 tumor was inhibited by echistatin compared with control (PBS). Tumor regression was also observed after treatment with echistatin. Bar: 2 mm. B. Quantitation of vessels vascularizing the tumor. Echistatin significantly decreased vascularization of the 143B tumor on the CAM (P<0.05). The OV100 variable-magnification fluorescence imager (Olympus, Tokyo, Japan) was used to obtain images. Error bars indicated SD. 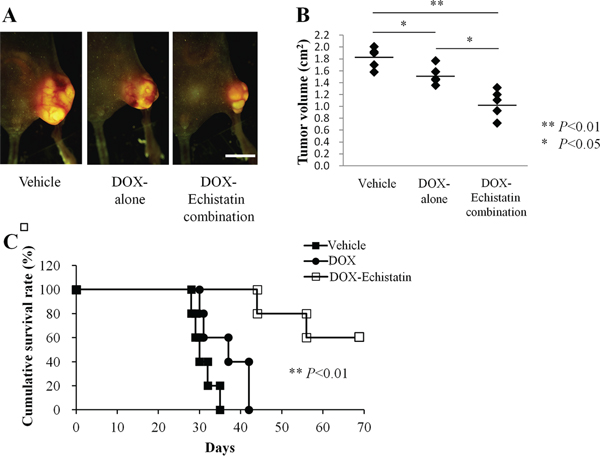 To determine whether echistatin could inhibit osteosarcoma experimental lung metastases, 143B-LM4 cells pretreated with echistatin were injected into the tail veil of nude mice. Untreated mice were used as the control. In another group on the following day, the mice were treated intravenously with echistatin (0.1 mg/kg). Lung samples were harvested from all of the mice one week after 143B-LM4 injection and imaged under fluorescence microscopy. The total number of metastases per lung was counted and averaged among the mice. Control mice had an average number of 105.8 pulmonary metastases. In contrast, mice treated with echistatin intravenously or in vitro had an average number of 25.3 or 10.2 experimental metastases, respectively (P < 0.01 and P < 0.01, respectively vs. untreated control) (Figure 4A & 4B).

Future studies will examine the cellular, histological and angiogenic effects of echistatin on both primary tumors and lung metastasis.

Previously-developed concepts and strategies of highly-selective tumor targeting can take advantage of molecular targeting of tumors, including tissue-selective therapy which focuses on unique differences between normal and tumor tissues [6-11].

Angiogenesis on the chick chorioallantoic membrane

The chorioallantoic membrane (CAM) assay for tumor-induced angiogenesis was performed as previously described [13, 14]. Ten-day-old chick embryos were purchased from Mclntyre Poultry (Lakeside, CA) and were incubated at 37°C with 60% humidity. A small hole was made through the shell at the end of the egg directly over the air sac with the use of a small craft drill. A second hole was drilled on the broad side of the egg directly over embryonic blood vessels, as determined previously by candling. Negative pressure was applied to the original hole, which resulted in the CAM pulling away from the shell membrane and creating a false air sac. A 1.0 cm × 1.0 cm square window was cut through the shell over the dropped CAM with the use of a small model grinding wheel to create a window that allowed direct access to the underlying CAM.

143B-LM4-GEP-REP cells were seeded on the CAMs of 10-day-old chick embryos. A cell suspension of 143B-LM4-GFP-RFP (1×108) was applied to the CAMs in a total volume of 30 μl RPMI 1640 medium with 15% FBS. The windows were sealed with tape, and the embryos were incubated for 7 days to allow growth of the human tumors. At the end of 7 days, the tumors were excised and trimmed free of surrounding CAM tissue. The tumors were then sliced into fragments of approximately 50 mg for use in the following angiogenesis assays.

Angiogenesis was induced in the chick embryo by implanting 50 mg fragments of 143B-LM4 tumor on the CAMs of 10-day-old embryos. After 24 h, echistatin (4 μg/embryo) or control PBS were injected. At the end of the-3-day incubation period, images were obtained with the OV100 Small Animal Imaging System (Olympus, Tokyo, Japan) and then angiogenesis was quantitated.

Athymic nu/nu nude mice (AntiCancer Inc., San Diego, CA), 4–6 weeks old, were used in this study. All mouse surgical procedures and imaging were performed with the animals anesthetized by subcutaneous injection of a ketamine mixture (0.02 ml solution of 20 mg/kg ketamine, 15.2 mg/kg xylazine, and 0.48 mg/kg acepromazine maleate). The response of animals during surgery was monitored to ensure adequate depth of anesthesia. The animals were observed on a daily basis and humanely sacrificed by CO2 inhalation if they met the following humane endpoint criteria: severe tumor burden (more than 20 mm in diameter), prostration, significant body weight loss, difficulty breathing, rotational motion and body temperature drop. Animals were housed in a barrier facility on a high efficacy particulate arrestance (HEPA)-filtered rack under standard conditions of 12-hour light/dark cycles. The animals were fed an autoclaved laboratory rodent diet. All animal studies were conducted in accordance with the principles and procedures outlined in the National Institutes of Health Guide for the Care and Use of Animals under Assurance Number A3873-1.

143B-LM4 cells (5×105) were transplanted into the tibia of the nude mice under the ketamine anesthesia, described above, as previously described [15]. One week after intra-tibial implantation, animals were separated into three groups and treated with doxorubicin (DOX) (0.25 mg/kg), a DOX (0.25 mg/kg)-echistatin (0.1 mg/kg) combination, or control PBS in each group five times at 1-week intervals. Tumor size was measured every other day and the mean tumor volume was calculated by the formula (square root of width×length/0.52) [16]. Mice were euthanized when tumor volume became approximately 2.0 cm3.

The effect of echistatin on experimental lung metastases

To determine whether echistatin could inhibit experimental osteosarcoma pulmonary metastases, a total of 200 μl medium containing 143B-LM4 cells (1.5×106) were injected into the tail vein of nude mice. The following day, animals were separated into two groups and treated with echistatin (0.1 mg/kg) or control PBS intravenously. In another experiment, 143B-LM4 cells treated with echistatin (1 μg/ml) prior to injection for 1 hr in vitro and then the cells were injected. One week after tumor injection, the lungs were harvested and imaged under fluorescence microscopy (OV100). The total number of metastases per lung was counted and averaged among the mice.

The OV100 small animal imaging system (Olympus Corp., Tokyo, Japan), was used. The OV100 contains an MT-20 light source (Olympus Biosystems, Planegg, Germany) and DP70 CCD camera (Olympus) for subcellular imaging in live mice. The optics of the OV100 have been specially developed for macroimaging as well as microimaging with high light-gathering capacity. The instrument incorporates a unique combination of high numerical aperture and long working distance. Four individually optimized objective lenses, parcentered and parfocal, provide a 105-fold magnification range for seamless imaging of the entire body down to the subcellular level without disturbing the animal [17, 18].

Imaging was also performed with an FV 1000 laser-scanning confocal microscope (Olympus, Tokyo, Japan) with a XLUMPLFL 20× (0.95 NA) water-immersion objective. GFP was excited at 488 nm. Images were produced with FV10-ASW Fluoview software (Olympus) and ImageJ and were not modified beyond the standard adjustment of intensity levels [19].

The data are presented as mean ± SD or mean ± SEM. Statistical analysis methods were the standard two-tailed Student’s t-test for two data sets and ANOVA for multiple data sets. The animal survival data were analyzed using Kaplan-Meier survival analysis and log-rank test. P values of less than 0.05 were considered significant.

This paper is dedicated to the memory of A.R. moossa, M.D., and Sun Lee, M.D.