Rad9a is required for spermatogonia differentiation in mice

3University of the Chinese Academy of Sciences, Beijing, China

Because conventional Rad9a deletion results in embryonic lethality, we constructed a mouse model with Rad9a deleted specifically in spermatogonia [6]. We crossed Rad9aF/F mice with Vasa-Cre transgenic mice, in which Cre begins to be expressed in primordial germ cells (PGC), to conditionally delete Rad9a in offspring PGCs (hereafter referred to as Rad9a cKO mice) (Figure 1A) [6, 24]. Western blotting results showed that RAD9A levels were sharply reduced in testis tissues from Rad9a cKO male mice as compared to Rad9aF/F mice. Residual RAD9A observed in knockout mice testes may come from Sertoli cells [23]. 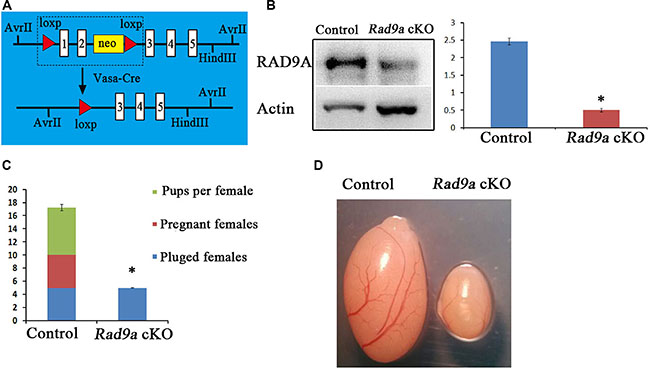 Figure 1: Conditional Rad9a deletion in SSCs via Vasa-Cre. Schematic of deletion of the floxed Rad9a exon1 and exon2 via Vasa-Cre mediated recombination (A) Western blot analysis of RAD9A in P9 testis extracts from both wild type and Rad9a cKO mice (B) Results were normalized to the actin loading control. The experiment was repeated three times. Fertility test (C) Plugged females became pregnant and gave birth to pups after crossing with Rad9aF/F control males, whereas none of the plugged females were pregnant after crossing with Rad9a cKO males. Testes from Rad9aF/F control males and Rad9a cKO males at six months (D) Testis size in Rad9a cKO mice was sharply reduced compared with that of control mice. *P < 0.01.

We assessed the effects of RAD9A deletion in PGCs on the reproductive performance of mutant male mice. None of the plugged female mice became pregnant after crossing with mutant males and no pups were produced (Figure 1C). In comparison, almost all female mice with vaginal plugs that mated with wild type mice became pregnant and produced seven pups each on average. We observed that the testes of Rad9a cKO male mice at six months of age were much smaller than those of Rad9aF/F mice (Figure 1D). 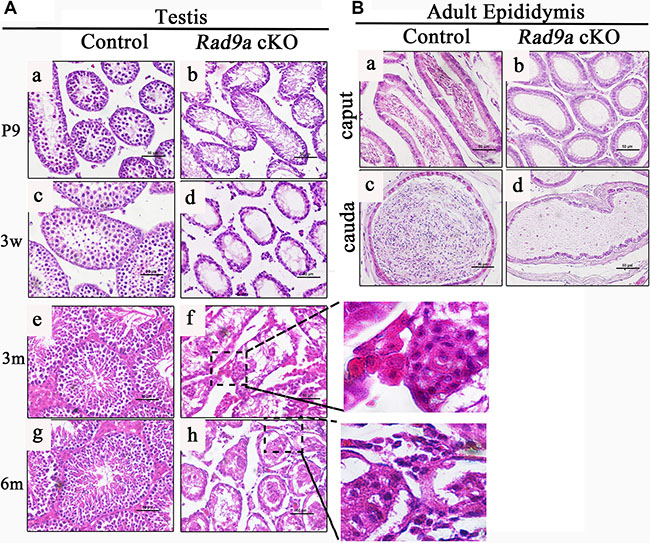 To confirm the testis phenotypes, we examined adult epididymides from both genotypes. Both the caput and cauda of control epididymides were full of mature condensed sperm (Figure 2Ba and 2Bc). However, the caput epididymides of knockout mice were vacant, without any cells (Figure 1Bb). There was also no sperm in mutant cauda epididymides, which were filled with lipid fluid (Figure 2Bd). These data indicated that conditional Rad9a deletion in spermatogonia completely blocked spermatogenisis, led to disorganized cell clusters in the testicular cords, and finally disaggregated the testicular cords. 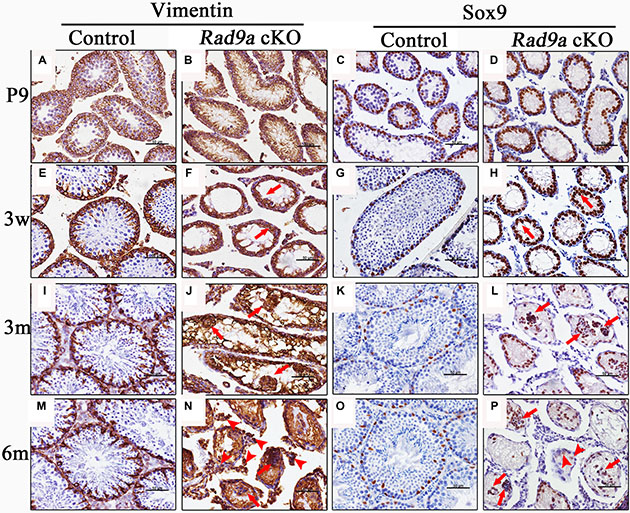 Figure 3: Malformed cell clusters mainly consisted of Sertoli cells. Rad9aF/F control and Rad9a cKO testes at different ages were immunostained with two Sertoli cell markers: Vimentin and Sox9. Nuclei were stained blue with hematoxylin. Vimentin accumulated at the junction between germ cells and Sertoli cells in the control testes at P9. Vimentin presented as a regularly radial pattern from three weeks to adulthood (A, E, I, and M). Vimentin was evenly dispersed throughout Sertoli cells in Rad9a cKO testes at P9, and abnormal Vimentin distribution became increasingly apparent from three weeks to adult hood (B, F, J, and N). In control testes, Sox9-positive cells began to migrate to the basal membrane at P9, and located to the basal membrane (C, G, K, and O). In Rad9a cKO testes, Sox9-positive cells migrated to the lumen from P9, and finally assembled into malformed cell clusters with few Sox9-negative cells (D, H, L, and P). 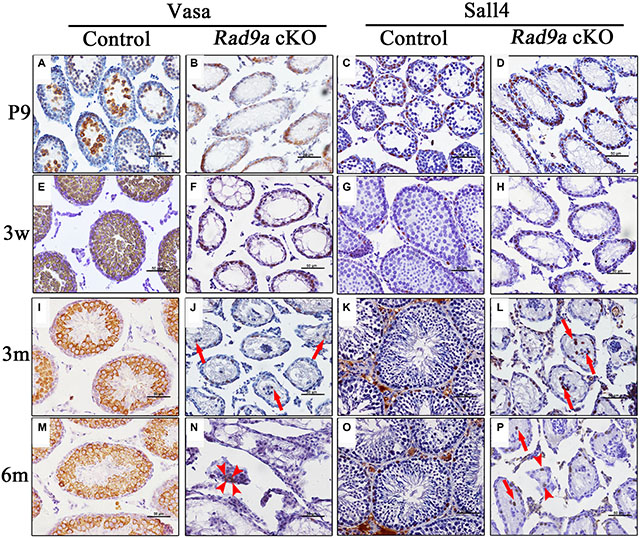 Mutant spermatogonia proliferate normally, but are prone to apoptosis 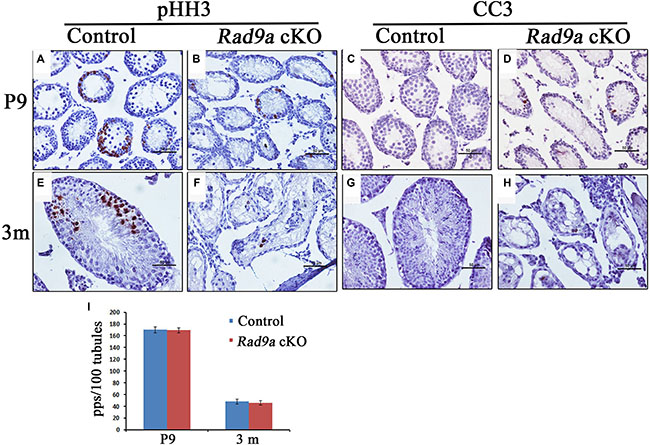 The 9-1-1 complex is a critical participant in several cellular processes, including DNA damage repair, homologous recombination, and cell cycle checkpoint control in both mitotic and meiotic cells [31–33]. However, the function of mammalian RAD9A in spermatogonia differentiation had not yet been elucidated. In this study, we constructed and characterized a mouse model with Rad9a deleted in spermatogonial stem cells (SSCs). Mutant males developed normally with typical reproductive behavior. However, none produced pups, apparently due to reduced testis size. Subsequent histological analyses of conditional knockout mouse testes indicated that mutant testicular cords were vacant as early as P9, leaving only Sertoli cells and spermatogonia at the basal membrane. These results were confirmed by Sertoli and germ cell marker immunostaining. We validated that no mutant spermatogonia entered meiosis. Thus, spermatogonia differentiation was completely blocked in mutant males. When Vasileva, et al. [23] deleted Rad9a in spermatogonia via Stra8-Cre, spermatogenesis was interrupted at the late zygotene or early pachytene stage of meiotic prophase I, and prophase spermatocytes survived normally in mutant testicular cords at adulthood. Differences between these results and those of the present study may result from knockout efficiency variations between the two mouse models. Many RAD9A-positive pachytene spermatocytes are still observed in testis when the Stra8-Cre knockout system is employed. This suggests that spermatocytes and spermatogonia might escape Cre excision [23]. In contrast, Cre excision in our study was much more effective in SSCs. As Rad9a null spermatogonia remained alive and proliferated normally in our study, blocked spermatogonia differentiation may not be attributed to defective DNA damage repair or other known RAD9A functions. Consistent with our results, Rad9a null mouse embryonic stem cells are reportedly viable and proliferate normally, while mouse embryonic fibroblasts with the same genotype cannot be established [6]. These data imply a currently unknown mechanism by which RAD9A protects differentiated cells against apoptosis. More studies are needed to elucidate this mechanism.

We observed malformed testicular cords in mutant testes at adulthood, and cells assembled irregularly to form disorganized cell clusters in mutant testicular cords. Some tubular architecture was also disrupted, and cells broke away into the interstitia of mutant testes. Interestingly, we observed Sox9- and Sall4-positive cells among these interstitium-localized cells. This was a novel phenotype, although it was relatively mild compared to disruption of testicular cords by Sertoli cell-specific factor dysfunction [1–4]. Testicular cord architecture remains intact following Stra8-Cre-mediated Rad9a deletion, although spermatogenesis is interrupted. This difference compared to our system may result from the fact that pachytene stage spermatocytes are present in adult male mutant testes in the Stra8-Cre system. This indicates that an intact blood-testis barrier has been constructed in mutant testicular cords. In contrast, no early spermatocytes were observed in mutant testes at P9 in our study. Our data suggest that spermatogonia differentiation blocked by Rad9a deletion may destroy junctions, such as the blood-testis barrier, and distort testicular construction. More detailed studies are needed to define which types of junctions are destroyed, and to elucidate the mechanisms underlying testicular cord malformation.

In conclusion, our findings revealed that RAD9A plays a key role in spermatogonia differentiation. Rad9a null spermatogonia failed to differentiate into spermatocytes, and testicular cord malformation was observed in mutant mouse testes, which led to complete male infertility.

Rad9aflox/flox mice (JAX Lab, referred to as Rad9aF/F) were maintained with a mixed genomic background of 129S4/SvJae and C57/BL6, and Vasa-Cre mice were maintained with a C57/BL6 genomic background [6, 24]. Mice with conditional Rad9a deletion (referred to as Rad9a cKO mice) were generated by crossing Rad9aF/F mice with Vasa-Cre mice. Mice were housed under controlled environmental conditions with free access to water and food, and 12-hour alternating light/dark cycles. Animal care and handling were conducted according to the guidelines of the Animal Research Committee of the Institute of Zoology, Chinese Academy of Sciences, China.

To assess the fertility of Rad9aF/F and Rad9a cKO males, we selected five healthy two-month-old males for each genotype and mated them to five six-week-old C57/BL6 females. Females with vaginal plugs after crossing were maintained separately. At about day 25 after checking vaginal plugs, females were sacrificed and the number of pregnant females and living pups were recorded.

Mice were sacrificed at about nine days of age, and testes were separated and lysed in radio immunoprecipitation assay lysis buffer containing Complete Mini Protease Inhibitor Cocktail Tablets (Roche). Samples were mixed with SDS sample buffer and boiled for 5 min at 100ºC for SDS-PAGE. Western blotting was performed as described previously [34]. Proteins were electrophoresed under reducing conditions in 12% SDS-PAGE gels and transferred to nitrocellulose membranes. Blots were blocked in 5% BSA and incubated overnight at 4°C with primary antibody, followed by incubation with secondary antibody for 1 h at room temperature. Signals were detected using the ECL western blotting detection system. The following primary antibodies were used in this study: mouse anti-RAD9A (Zen Biosciences, Chengdu, China; 200784), and rabbit anti-GAPDH (CST, 5174) according to the manufacturer’s instructions. Secondary antibodies were purchased from ZhongShan Golden Bridge Biotechnology Co., Ltd (Beijing, China).

All experiments were repeated at least three times. For histological analysis and immunochemistry, one representative image of the results from several independent experiments was selected for presentation. For comparisons, means and standard deviations were calculated, and the difference between two groups was analyzed using Student’s t-test. Differences were considered statistically significant if P < 0.05.

We are grateful to Ying-Chun Ouyang, Shi-Wen Li, Li-Juan Wang and Hua Qin for their technical assistance. We also thank Zhao-Feng Huang, Bo-Lan Yu and Jing-Pian Peng for their useful suggestions.