Orofacial clefts include cleft palate only (CPO), cleft lip with cleft palate (CLP) and cleft lip only (CLO). Approximately 1/800 live births worldwide are affected by these diseases [1]. Nonsyndromic orofacial clefts occur as isolated entities with no other apparent structural and/or developmental abnormalities. The majority of CLP cases are nonsyndromic (NS) (~70%) [2]. Cleft palate only (CPO) is the least common form of the orofacial clefts (approximately 33%) [3]. The aetiology is multifactorial and involves both genetic and environmental risk factors. Most studies suggest that distinct etiological mechanisms underlie CLP and CPO [4, 5]; however, some overlapping exists in their aetiologies [6, 7]. Thus, our knowledge about whether CPO does indeed differ from CLP remains incomplete.

Table 1: List of 63 miRNAs that were co-overexpressed in CP and CLP plasma samples

Table 2: List of 49 miRNAs that were co-downregulated in CP and CLP plasma samples 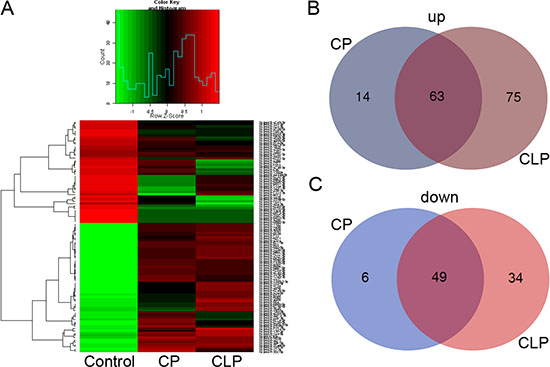 Among the 63 upregulated and 49 downregulated miRNAs in both the CP and CLP plasma samples, six miRNAs, namely miR-340–5p, miR-877–5p, miR-3648, miR-1260a, miR-494–3p, and miR-1304–3p, were selected for expression validation (Table 3). The selection standards were the same as we previously reported [11] and were as follows: infrequently reported in the literature, present in both samples and higher deep sequencing reads in miRBase. Bulge-Loop™ qRT-PCR was performed to validate these six differentially expressed miRNAs found in the miRNA microarray analysis. RNA was isolated from 57 plasma samples, including samples from 16 CP, 33 CLP and 8 healthy children, using the mirVana PARIS kit (Ambion, Carlsbad, CA, USA). The results showed that three miRNAs, miR-340–5p, miR-877–5p and miR-3648, were significantly upregulated in both the CP and CLP plasma samples (Figure 2). In contrast, three miRNAs, miR-1260a, miR-494–3p and miR-1304–3p, were significantly downregulated in both the CP and CLP plasma samples (Figure 2). Therefore, a similar pattern of upregulation and downregulation was observed in both the microarray and qRT-PCR samples for the 6 miRNAs assessed (Table 3, Figure 2). Therefore, our microarray data were reliable and stable. 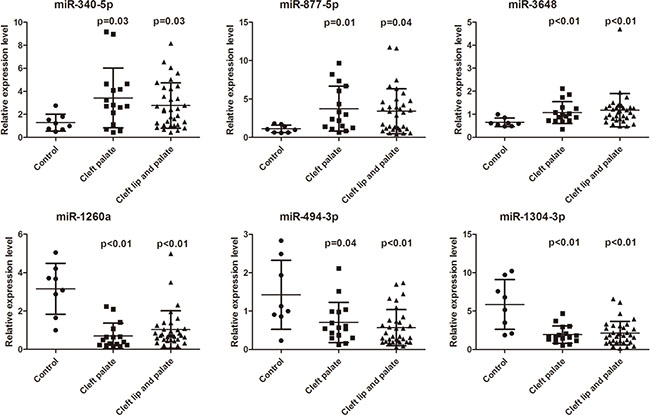 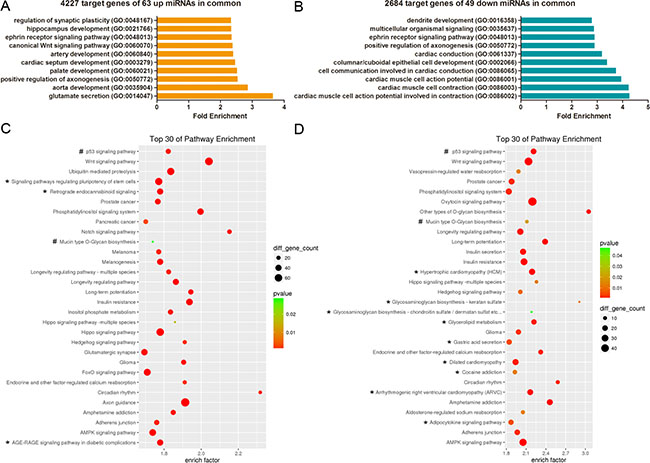 To explore whether distinct biological processes regulated CLP and CPO, we performed gene ontology (GO) and KEGG analysis of the predicted targets of the differentially expressed miRNAs in CP, including 14 upregulated miRNAs producing 1057 predictive target genes and 6 downregulated miRNAs yielding 363 potential target genes. The top ten enriched GO terms are listed in Figure 4A and 4B, respectively. The analysis revealed that the potential target genes of the 14 miRNAs upregulated in CP were associated with hippo signalling, dendrite morphogenesis or development, positive regulation of smooth muscle cell proliferation, neural tube formation and developmental cell growth (Figure 4A). Conversely, the potential target genes of the 6 miRNAs downregulated in CP were associated with modulation of synaptic transmission, blood vessel or tissue morphogenesis, regulation of cell morphogenesis or cell differentiation and neurogenesis (Figure 4B). Surprisingly, 1057 of the predictive target genes of the 14 miRNAs upregulated in CP did not display KEGG enrichment results using the SBC analysis system. For the 363 potential target genes of the 6 miRNAs downregulateCP, the pathway enrichment results showed that those genes were mainly involved in thyroid cancer, the Notch signalling pathway, fatty acid metabolism, adherens junctions and amphetamine addiction (Figure 4C). 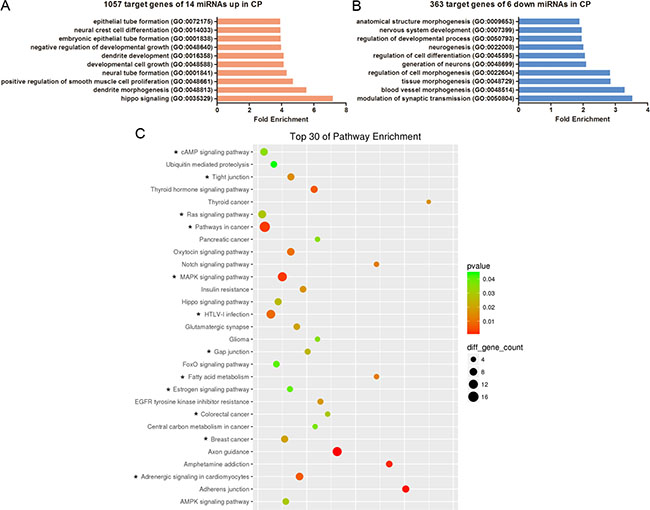 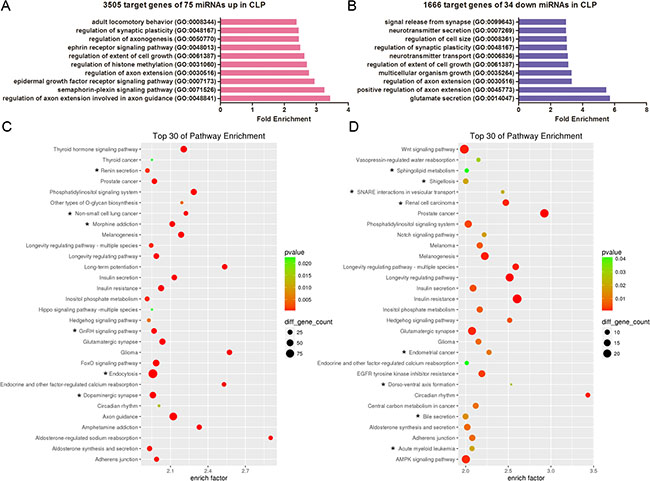 Plasma miRNAs are highly stabile under handling and storage conditions [12]. They play crucial roles in many diseases including cancer [13, 14] and respiratory diseases [15]. Nonsyndromic cleft palate and nonsyndromic cleft lip with cleft palate are two types of oral clefting that occur without other developmental syndromes. Research on the roles of differentially expressed plasma miRNAs in NSCP and NSCLP patients will improve our knowledge, diagnosis and management of the two diseases. This study, for the first time, has used microarray profiling to evaluate the differential expression of miRNAs in plasma samples from NSCP and NSCLP patients compared with healthy children. Six miRNAs, namely miR-340–5p, miR-877–5p, miR-3648, miR-1260a, miR-494–3p, and miR-1304–3p, were found to be differentially expressed in both the NSCP and NSCLP plasma samples.

Venn diagrams have been widely used to visualize the relationship between complex genetic data sets [16, 17]. Based on our miRNA microarray data, we found the intersection of differentially expressed miRNAs in CP and CLP. Using Bulge-Loop™ qRT-PCR analysis, we demonstrated that the upregulated and downregulated miRNAs were consistent with the results of the miRNA microarray assay. Therefore, we investigated the key genes and pathways associated with CP and/or CLP using bioinformatics analysis according to the microarray data. In mammals, miRNAs could regulate 30% of the protein-coding genes through posttranscriptional silencing; therefore, the dysregulation of miRNAs in NSCP or NSCLP patients could have a profound influence on various biological functions.

NSCP and NSCLP are developmental defects. The differentially expressed plasma miRNAs identified in the affected infants could be from their mother’s blood. Further elucidation of the sources of the plasma miRNAs in human tissues and their roles in the pathogenesis of cleft palate or cleft lip with cleft palate, particularly in palate development or the regulation of cranial neural crest (CNC) cells that give rise to craniofacial structures, needs to be further explored. In addition, larger samples are needed to perform receiver operating characteristic (ROC) curve analysis to prove that some of the children plasma microRNAs are promising biomarkers.

Taken together, based on the Bulge-Loop™ qRT-PCR analysis and miRNA microarray assay, we uncovered a differential plasma miRNA expression profile in NSCP and NSCLP patients compared with healthy children. Using GO and KEGG pathway analysis, we found distinct and overlapping biological processes or signalling pathways involved in CP and CLP. Further studies should examine the mechanism of the potential target genes, which may provide new avenues for future clinical prevention and therapy.

The study protocol was approved by the Institutional Review Board of Nanjing Medical University (2014–10–16). The plasma samples were collected according to previously described methods [11]. Nonsyndromic cleft palate (NSCP) and nonsyndromic cleft lip with cleft palate (NSCLP) patients who underwent surgery and healthy children (normal face but who underwent surgery for hydrocele) participated in this study with their parent’s consent at the Department of Burns and Plastic Surgery, Nanjing Children’s Hospital Affiliated to Nanjing Medical University in Nanjing, China. All NSCP, NSCLP and healthy children were between 2 and 12 months old. The patient information is listed in Table 4. Briefly, peripheral blood was collected into EDTAK2 tubes (regular type), and then immediately centrifuged at 1000 g for 15 min. The supernatant plasma was transferred to RNase-free tubes and centrifuged at 12000 g for 10 min to pellet any remaining cellular debris. Aliquots of the supernatant were transferred to fresh tubes and immediately stored at –80°C.

Total RNA was isolated from 400 μl of human plasma samples using the mirVana PARIS kit (Ambion, Carlsbad, CA, USA) according to the manufacturer’s instructions. After infusing an equal volume of 2x denaturing solution to the plasma samples to inactivate RNases, the denatured samples were mixed with Synthetic Caenorhabditis elegans miRNA cel-miR-39 (GenePharma, Shanghai, China), to normalize the variation in RNA isolation from the different samples. RNA was eluted using 100 μl of elution solution.

To confirm the microarray data, six selected miRNAs with two-fold or greater changes were further validated in samples from an additional 16 CP, 33 CLP and 8 healthy children using Bulge-Loop™ qRT-PCR according to the manufacturer’s protocol (RIBOBIO, Guangzhou, China) with SYBR green on an Applied Biosystems ViiA™ 7 Dx (Life Technologies, USA). The expression levels of the miRNAs were normalized to C. elegans control miRNA cel-39 using the 2(–△△Ct) method [27].

The validation results from the qRT-PCR analysis are displayed as the mean ± SD. Statistical significance was assessed using the Mann-Whitney U test in Graphpad Prism 6 (Graphpad software, CA, USA). A P < 0.05 was considered statistically significant.