Elevated expression of STIM1 is involved in lung tumorigenesis

This study aimed to address the potential role of STIM1 (stromal interaction molecule 1) in lung tumorigenesis. Colony formation in soft agar assay and tumorigenicity in nude mice assay were conducted. Western blot, immunohistochemistry and quantitative real-time polymerase chain reaction were used to measure the STIM1 expression. The distribution of cell cycle was detected by flow cytometry assay. Our results showed that the expression of STIM1 mRNA was significantly higher in human lung tumors than that in adjacent non-neoplastic lung tissues. Significantly increased expression of STIM1 mRNA and protein was observed in 16HBE-benzo(a)pyrene (BaP) cells and in BaP-treated mice lung tissues compared with 16HBE-control cells and the control group, respectively. Silencing STIM1 inhibited the proliferation and colony formation of A549 cells in in vitro experiments, attenuated the growth of tumor xenografts of A549 cells in in vivo experiments and induced the arrest of cell cycle in the G1 phase. The markedly decreased expression of cyclin D1 protein was observed in A549-shRNA-STIM1 cells as compared to A549-shRNA-control cells. The markedly increased expression of p21 protein was observed in A549-shRNA-STIM1 cells as compared to A549-shRNA-control cells. The expression levels of β-catenin and TGIF proteins were lower in A549-shRNA-STIM1 cells than those in A549-shRNA-control cells. In conclusion, this study indicated that the elevated expression of STIM1 might be involved in lung tumorigenesis.

STIM1 (stromal interaction molecule 1) was identified as a novel human gene that maps to a region of chromosome 11p15.5 [12]. STIM1 protein is mainly resident in the endoplasmic reticulum (ER), and activates a set of plasma membrane Ca2+ channels termed store-operated calcium channels (SOCs) when the concentration of free Ca2+ within the ER drops transiently as a result of Ca2+ release from this compartment [13]. It has been reported that STIM1 protein has novel and unexpected physiological and pathophysiological roles in several tissues [14], the clinical phenotype of STIM1-deficient patients was characterized by immunodeficiency together with autoimmune disease, congenital myopathy and ectodermal dysplasia [15].

STIM1 was initially suggested to be a tumor suppressor given that it induced the inhibition of rhabdoid tumor and rhabdomyosarcoma cell lines [16]. Suyama et al. reported that knocking down STIM1 accelerated the cell motility of melanoma cells, and STIM1 was identified as an anti-metastasis gene [17]. However, recent data reveal opposite functions. Wong et al. reported that the presence of STIM1 overexpression in colon adenocarcinomas was associated with cell migration and cell motility properties [18]. Yang et al. reported that STIM1 silencing inhibited the migration and metastasis of breast cancer cells [19]. Chen et al. reported that a poorer clinical outcome was statistically significant in primary tumors with STIM1 upregulation. STIM1 overexpression markedly enhanced cervical tumor cell growth, local spread and angiogenesis and promoted cancer cell migration and invasion [20]. Additional studies showed that knocking down STIM1 resulted in reduced cancer metastasis in colorectal cancer [21], melanoma [22, 23] and hepatocellular carcinoma [24].

However, the potential role of STIM1 in lung tumorigenesis has not yet been clearly understood. One published paper reported that higher levels of STIM1 protein expression were observed in the samples of patients with non-small cell lung cancer (NSCLC) compared with adjacent non-neoplastic lung samples as detected by immunoblotting analysis and immunohistochemistry [25]. To further understand the potential role of STIM1 in lung tumorigenesis, we measured the expression levels of STIM1 in malignant human bronchial epithelial (16HBE) cells transformed by benzo(a)pyrene (BaP) and mice lung tissues treated with BaP. We also investigated the influences of STIM1 silencing on the proliferation and tumor formation of A549 cells in in vitro and in vivo experiments, and the distribution of cell cycle of A549 cells.

To investigate whether or not STIM1 has a potential role in lung cancer, we examined STIM1 expression by qRT-PCR assay. Thirty human lung cancer tissues and paired adjacent non-neoplastic lung tissues were collected. Our results demonstrated that STIM1 mRNA expression was higher in human lung tumors than that in adjacent non-neoplastic lung tissues (P = 0.001) (Figure 1). 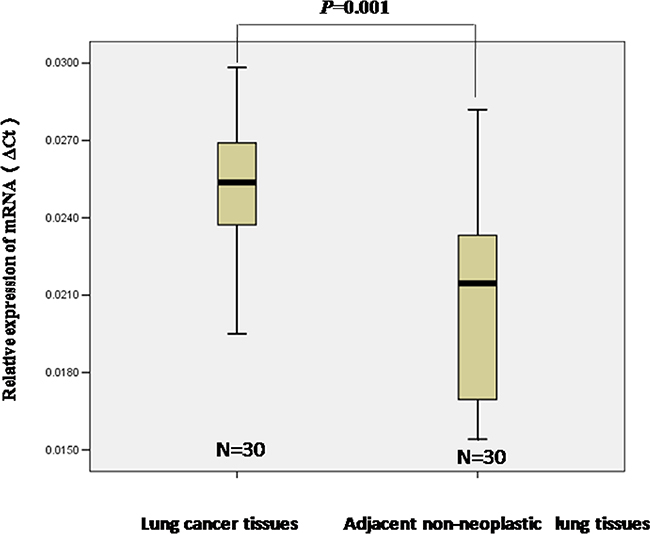 STIM1 mRNA and protein expression profiles were examined by qRT-PCR and western blot assay. Increased STIM1 protein (Figure 2A) and mRNA (Figure 2B) expression was observed in 16HBE-BaP cells compared with 16HBE-control cells. Consistent with the data from cell line, increased expression of STIM1 protein (Figure 2C) and mRNA (Figure 2D) was observed in mice lung tissues treated with BaP as compared with the control group. The immunohistochemistry analysis demonstrated that the staining signal of STIM1 was strong in the nucleus and cytoplasm in some cells in the BaP-treated group but weak in the control group (Figure 2E). 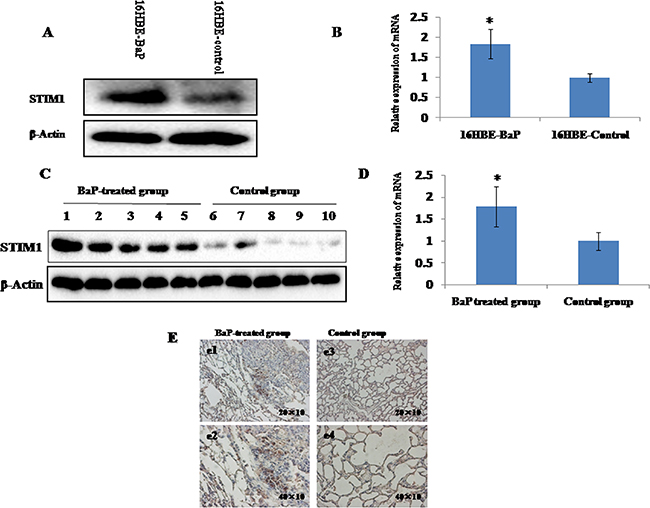 Silencing efficiency of STIM1 gene in A549 cells

Figure 3A showed that the markedly decreased expression of STIM1 protein was observed in A549-shRNA-STIM1 cells as compared to A549-shRNA-control cells. This observation suggested that an A549 cell line stably silencing STIM1 was successfully engineered. 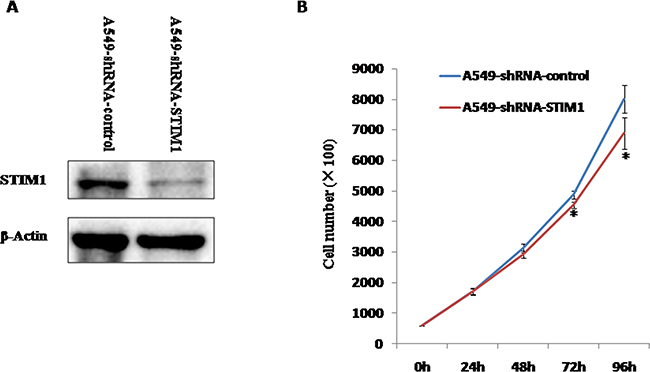 Silencing STIM1 suppressed the proliferation of A549 cells

We investigated the effects of STIM1 silencing on the proliferation of A549 cells. Our results indicated that the significantly slower growth rate was observed in A549-shRNA-STIM1 cells as compared to A549-shRNA-control cells at 72 h and 96 h (P < 0.05). 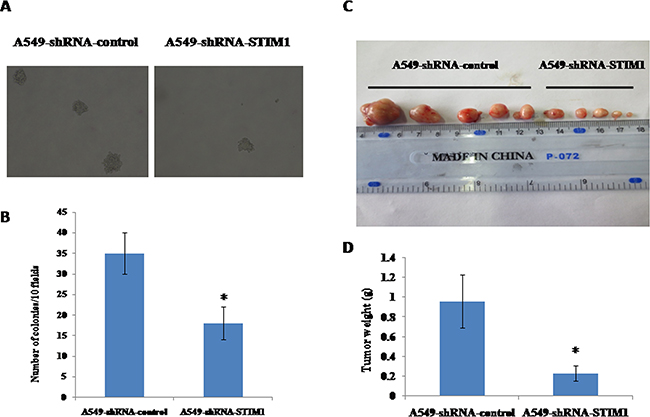 Silencing STIM1 suppressed tumor growth of A549 cells in vivo 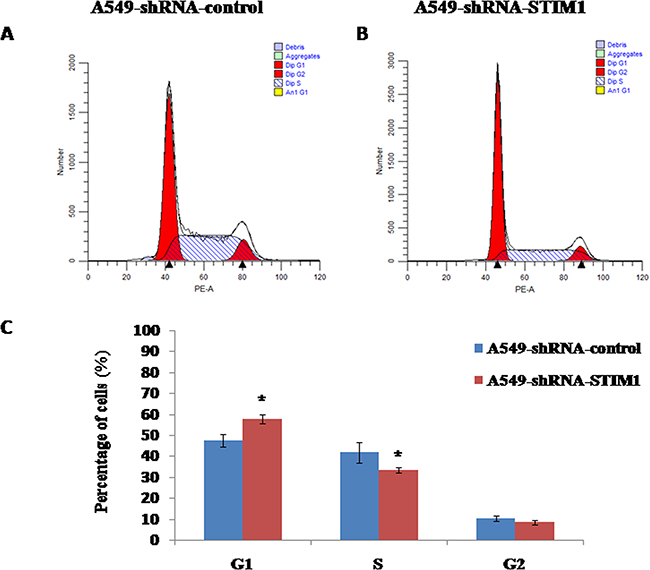 To explore the potential mechanism related to the cell cycle arrest, the expression levels of cell cycle-related proteins were measured by western blot analysis. Our results indicated that silencing STIM1 reduced cyclin D1 protein expression and increased p21 protein expression (Figure 6A). No significant alterations in the expression levels of cyclin B1, cyclin A, CDK4 and phospho-Rb proteins were noted between A549-shRNA-STIM1 cells and A549-shRNA-control cells (Figure 6A). 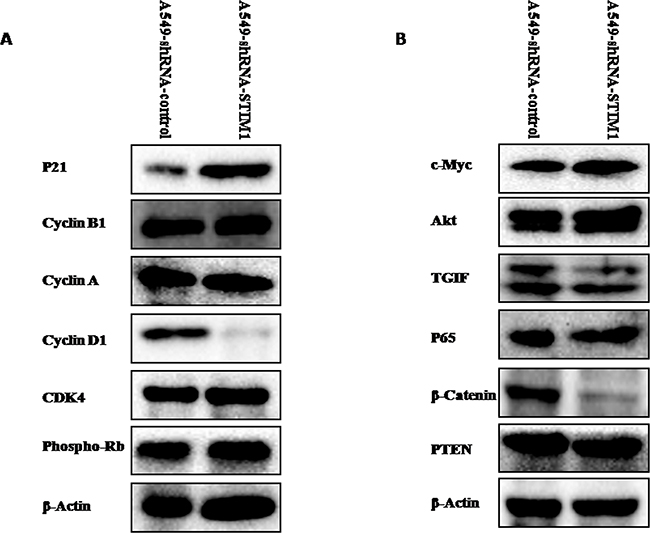 Previous experimental studies showed that suppression of STIM1 inhibited cell proliferation of glioblastoma [26], melanoma [22], hepatocellular carcinoma [27], human epidermoid carcinoma [28] and hypopharyngeal carcinoma [29]. In this current study, we observed that silencing STIM1 inhibited A549 cell proliferation. Combined with previous results, silencing STIM1 inhibited the growth of many types of tumor cells. To further investigate the effects of silencing STIM1 on tumor formation in vitro and in vivo, a soft agar colony formation assay was performed, and a mouse tumor xenograft model was established. Our results demonstrated that suppression of STIM1 reduced the tumor growth and formation of human non-small cell lung cancer cell line of A549 in in vitro experiments and in in vivo experiments, which confirmed our above observations that STIM1 might play an important role in lung tumorigenesis.

One of the major causes of reducing the proliferation of cancer cells is cell cycle arrest. Our data indicated that silencing STIM1 arrested the cell cycle of A549 in G1 phase. The significantly increased percentage of cells in G1 phase was observed in A549-shRNA-STIM1 cells as compared to that in A549-shRNA-control cells. Accompanied with G1 phase arrest, we observed the downregulation of cyclin D1 protein in A549-shRNA-STIM1 cells. Studies showed that increased cyclin D1 expression in cancer cells resulted in an uncontrolled growth advantage [30]. In addition, silencing STIM1 in this study significantly increased p21 protein expression. p21 is one of the major cyclin-dependent kinase inhibitors (CDKI), which exerts negative effects on cell cycle progression and arrests proliferation by binding to active cyclin-CDK (cyclin-dependent kinase) complex and inhibiting their kinase activities [31–34]. Lin et al. observed that STIM1 silencing in U251 cells resulted in a marked decrease in cyclin D1 expression and a marked increase in p21 expression [26]. Chen et al. reported that knocking down STIM1 induced the expression of p21 in cervical cancer SiHa cells [20]. Taken together, the silencing of STIM1 induced G1 phase cell cycle arrest may be mediated via downregulating cyclin D1 and upregulating p21 in A549 cells. However, the potential molecular mechanisms of STIM1 regulating the expression of cyclin D1 and p21 were not investigated in this present study and should be the focus of future studies. A previous study proposed that posttranslational regulation via the 26S-proteasome-dependent pathway might contribute to the mechanisms controlling p21 upregulation in STIM1-knock-down cervical cancer cells [20].

In summary, our data suggest that increased expression of STIM1 has a potential role in lung tumorigenesis. Silencing STIM1 attenuated the tumor growth of A549 cells. In addition, STIM1 suppression induced A549 cell cycle arrest in G1 phase by upregulating p21 and downregulating cyclin D1. This study provides new insights into the molecular oncogenesis of lung cancer and suggests that STIM1 may be a potential molecular target for human lung cancer therapy.

Samples from thirty human lung cancer patients were reported in our previous study [38]. The histological diagnosis of the specific type of lung cancer was determined according to the recommendations of the WHO. The Ethics Committee of the First Affiliated Hospital of Zhengzhou University approved this work, and we carried out the experiments in accordance with the relevant guidelines, including any relevant details. All patients participating in this study provided informed consent.

The detailed procedures of soft agar colony formation assay were described in our previous publications [38, 39].

The Ethics Committee of Henan Center for Disease Control and Prevention approved this work. All animal experiments were carried out in accordance with the approved guidelines. Ten female BALB/c nude mice aged four weeks were obtained from Vital River Laboratory Animal Technology Co. Ltd (Beijing, China). Cells (A549-shRNA-STIM1 and A549-shRNA-control) were prepared and injected to each mouse in accordance with our previous papers [38, 39]. The mice were sacrificed at 16 days post-injection.

The flow cytometry (BD, Biosciences) was applied to measure the distribution of cell cycle. The detailed procedures of cell cycle analysis were reported in our previous paper [39].

BaP-treated mice lung tissues and control lung tissues were maintained in our laboratory [38]. The Ethics Committee of Henan Center for Disease Control and Prevention approved this work. All the animal experiments were performed in accordance with the approved guidelines. Immunohistochemistry analysis was performed according to the manufacturer’s instructions (Beijing ComWin Biotech Co., Ltd; CW0120).

The data are presented as the mean ± standard deviation (SD) or median. Student’s t test and Mann-Whitney U test were performed. All the tests were two-sided, P < 0.05 was considered to be significant. Statistical analyses were carried out by using SPSS 13.0 software (SPSS, Chicago, IL).

This work was supported by grants from the National Natural Science Foundation of China (U1404815) and the Henan Collaborative Innovation Center of Molecular Diagnosis and Laboratory Medicine (XTCX-2015-PY7). The funders had no role in study design, data collection and analysis, decision to publish, or preparation of the manuscript.