Mitochondrial dysfunction is common in cancer, and the mitochondrial electron transport chain is often affected in carcinogenesis. So far, few is known about the expression of the mitochondrial complex III (ubiquinol-cytochrome c reductase complex) subunits in clear cell renal cell carcinoma (ccRCC). In this study, the NextBio database was used to determine an expression profile of the mitochondrial complex III subunits based on published microarray studies. We observed that five out of 11 subunits of the complex III were downregulated in at least three microarray studies. The decreased mRNA expression level of UQCRFS1 and UQCRC1 in ccRCC was confirmed using PCR. Low mRNA levels UQCRC1 were also correlated with a shorter period of cancer-specific and overall survival. Furthermore, UQCRFS1 and UQCRC1 were also decreased in ccRCC on the protein level as determined using Western blotting and immunohistochemistry. UQCRC1 protein expression was also lower in ccRCC than in papillary and chromophobe subtypes. Analyzing gene expression and DNA methylation in The Cancer Genome Atlas cohort revealed an inverse correlation of gene expression and DNA methylation, suggesting that DNA hypermethylation is regulating the expression of UQCRC1 and UQCRFS1. Taken together, our data implicate that dysregulated UQCRC1 and UQCRFS1 are involved in impaired mitochondrial electron transport chain function.

Renal tumors are among the most common malignancies: in 2016, 62,700 new cases and 14,240 deaths were estimated in 2016 in the US [1]. Thereof, renal cell carcinoma (RCC) is the most common kidney cancer, and the clear cell subtype (ccRCC) accounts for approximately 80% of renal carcinomas. Patients with localized RCC are usually treated with curative intent, whereas cure is usually not attainable in patients with metastatic RCC. Significant therapeutic improvements have been made with the introduction of targeted antiangiogenic and immune therapies, but optimal sequencing of therapeutics is unknown [2]. Biomarkers could help to provide an individualized therapy, however such a biomarker has to be discovered.

Mitochondria are gaining an increasing interest in recent years because of their role as sensors and executioners of apoptosis and their involvement in carcinogenesis [3]. Warburg hypothesized almost one century ago that mitochondrial dysfunction in tumor cells is a major cause of carcinogenesis when he discovered that tumor cells receive energy from glycolysis rather than the mitochondrial oxidative phosphorylation. RCC is characterized by a down-regulated mitochondrial activity and a reduced activity of the mitochondrial electron transport chain [4]. However, the underlying mechanism remains to be clarified. It was earlier shown that various structural proteins of the respiratory chain undergo downregulation during renal carcinogenesis [5] including the ubiquinol-cytochrome c reductase complex [6]. The ubiquinol-cytochrome c reductase complex, also called mitochondrial complex III, is the third complex in the mitochondrial electron transport chain and plays a crucial role in the synthesis of ATP. The complex III is a composed of 11 subunits which form a multisegment transmembrane protein.

The NextBio database included 16 different microarray studies for the comparison of normal and ccRCC tissue [7–22]. Among the 11 subunits of the mitochondrial complex III, 8 subunits were significantly dysregulated in at least one microarray study: 7 were down- and 1 was upregulated in ccRCC. However, only UQCRFS1 and UQCRC1 were significantly downregulated in all respectively 13 of 16 microarray experiments, whereas gene expression of the remaining subunits was much more inconsistent in the different studies (Figure 1). 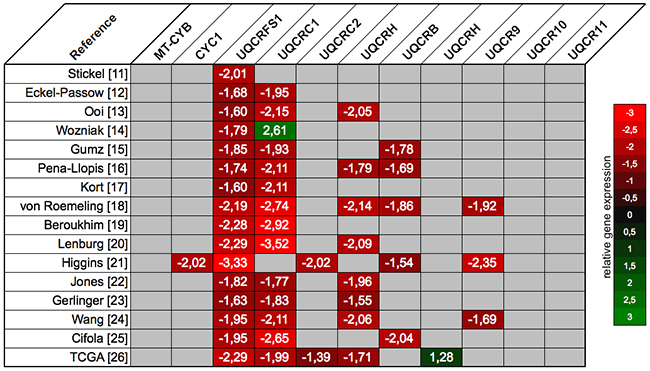 Figure 1: The expression profile of the mitochondrial complex III subunits was retrieved from the NextBio database: UQCRC1 and UQCRFS1 were significantly downregulated across most of the microarray gene expression studies. Relative gene expression levels in ccRCC compared to normal renal tissue are scaled from red (downregulation) to green (upregulation); non-significant expression differences are coded grey.

Both, UQCRFS1 and UQCRC1 were not correlated with clinicopathological parameters (i.e. pT-stage, pN-stage, cM-stage, grading; all p>0.05). Kaplan Meier estimates indicated a prognostic potential for both genes: Follow up information was available for 71 patients, among these 6 patients died from RCC and 2 from other causes. It should thus be noted that CSS and OS survival estimates were similar because only 3 non-RCC related deaths were observed in the cohort. UQCRC1 levels below the median were correlated with poor overall (OS; log rank p=0.015, see Figure 2B) and cancer-specific (CSS; log rank p=0.013) survival following radical/partial nephrectomy for ccRCC, whereas UQCRFS1 was not predictive of OS (log rank p=0.235) nor CSS (log rank p=0.331). Furthermore, univariate and multivariate Cox regression analysis identified UQCRC1 expression as an independent predictor of CSS and OS in ccRCC patients; see Table 1 for details. It should be noted that known risk factors like pT-stage or lymph node involvement did not predict survival and thus may reflect the limited statistical power of our cohort.

Table 1: Cox regression analysis for the prediction of cancer-specific and overall survival

Next, UQCRFS1 and UQCRC1 expression was studied on the protein level using Western blot. In 8 paired normal and ccRCC tissues, both subunits were expressed at distinctly lower levels in ccRCC tissue. Expression levels seemed to be similar in tissue from patients with localized and metastatic ccRCC (Figure 3A). Interestingly, we observed a double band (approximately 25 and 28 kDa) for UQCRFS1 in most normal tissue samples; possibly, this indicates the presence of posttranslational modification (e.g. phosphorylation) or a different, so far unknown splice variant in normal renal cells.

A tissue microarray which included ccRCC (n=152), pRCC (n=29), chRCC (n=10), oncocytoma (n=10) as well as normal renal tissues (n=30) was used for immunohistochemical studies; an illustration showing staining of UQCRC1 and UQCRFS1 in normal and ccRCC tissue is provided in Figure 3B. As expected, immunohistochemical staining of UQCRC1 and UQCRFS1 was weaker in the cytoplasm of ccRCC compared to normal tissue. The in-depth analysis of the sub-compartments of the kidney, we observed significantly lower UQCRC1 (mean level: 0.62; p<0.001) and UQCRFS1 (mean levels: 1.14; p<0.001) expression in ccRCC compared to the proximal tubules (2.59; 1.82) and the distal tubules (2.97; 2.56). The number of samples with evaluable collecting duct (2.26; 1.05) and loop of Henle (0.96; 0.04) structures was low, and therefore not statistically evaluated. Notably, UQCRFS1 was almost not expressed in the loop of Henle (Figure 3C). 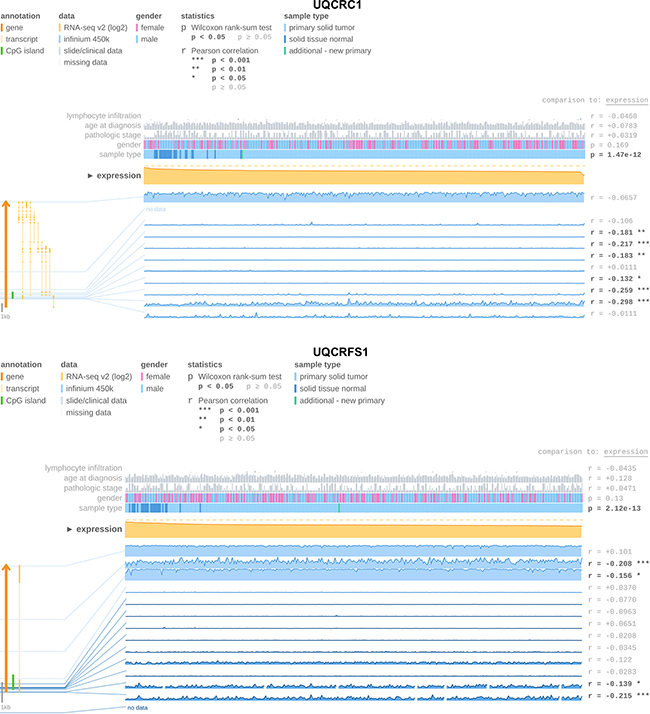 RCC is characterized by dysregulation of multiple metabolic pathways involved in oxygen, energy and nutrient sensing cascades (deregulation of AMPK-TSC1/2-mTOR and PI3K-Akt-mTOR pathways) [24], e.g. deregulated oxygen sensing is characterized by VHL/HIF pathway alterations with subsequent upregulation of HIF-responsive genes and glucose transporters allowing the reliance on aerobic glycolysis [24]. We earlier reported dysregulation of the electron transport chain subunit NDUFA4 [25] and its paralogue NDUFA4L2 [26], and demonstrated an prognostic relevance of NDUFA4 [25]. There is evidence for an decreased expression level of the complex III in RCC [6, 27] leading to decreased activity of the electron transport chain [27]. However, former studies did not investigate whether all or only specific subunits undergo downregulation. Re-evaluation of published microarray studies revealed that only two members, UQCRC1 and UQCRFS1, were consistently downregulated in ccRCC tissue, whereas the gene expression values for the other nine subunits were contradictory or not different from normal renal tissue. This finding was confirmed experimentally for the UQCRC1 and UQCRFS1 mRNA and protein. Recently, it was shown that low expression levels of UQCRH, another ubiquinol-cytochrome c reductase complex subunit, were correlated with recurrence-free and overall survival in ccRCC patients [28].

Few is known about UQCRC1 and UQCRFS1 so far. Both genes are nuclear-encoded proteins localized at the inner mitochondrial membrane. Former studies reported deregulation of these genes in cancer: UQCRC1 expression levels were increased in osteosarcoma [29], breast and ovarian tumors [30]. The UQCRFS1 gene was overexpressed in gastric [31] and breast cancer [32–34]; gene amplification was identified as causative for upregulation in both tumors [31, 33]. Thus, UQCRC1 and UQCRFS1 seem to be involved in carcinogenesis, but deregulation may be depending upon the tumor entity, and its expression is decreased in ccRCC. Notably, downregulation of UQCRC1 and UQCRFS1 seems to be an adverse event in ccRCC, as decreased UQCRC1 mRNA expression levels were associated with a poor overall survival following nephrectomy. We observed an inverse correlation of UQCRFS1 and UQCRC1 promoter DNA methylation and mRNA levels. Similarly, UQCRFS1 was methylated in acute lymphoblastic leukemia cells [35]. The functional consequence of altered expression levels is largely unknown. Knockdown of UQCRFS1 in breast cancer cell lines reduced the mitochondrial membrane potential and impaired matrigel invasion [34].

The collection of tissue samples was performed within the framework of the Biobank at the CIO Cologne-Bonn. All patients underwent radical or partial nephrectomy at the Department of Urology at the University Hospital Bonn. Written informed consent for the collection of biomaterials was obtained from all patients. The study was approved by the ethic committee of the University Bonn (vote: 280/12).

RCC and normal renal tissue was split for formalin fixation, paraffin embedding (FFPE) and fresh-frozen (FFT) storage; all tissues underwent histological examination to confirm the diagnosis. FFT were stored at -80 °C, and used for qPCR (74 ccRCC and 36 normal renal tissues) and Western Blot (corresponding 8 ccRCC and normal renal tissues) experiments. FFPE tissues were used for the construction of a tissue microarray with 191 RCC specimens [comprising 152 ccRCC, 29 papillary (pRCC), 10 chromophobe (chRCC), 10 oncocytoma and 30 normal renal tissue samples were used for immunochemistry experiments [36]. All tissues were re-evaluated by an uro-pathologist, and classified according the WHO classification from 2009. The detailed clinical-pathological parameters are shown in Table 2.

RNA isolation was performed as described earlier [37]. Total RNA was isolated with the mirVana miRNA Isolation Kit (Ambion, Foster City, CA, USA) and treated with DNase (Ambion). The RNA quantity was determined using a NanoDrop 2000 spectrophotometer (Thermo Scientific, Wilmington, DE, USA). The RNA integrity was checked by evaluation of the 28S and 18S rRNA bands in a gel electrophoresis.

UQCRFS1 and UQCRC1 expression was further investigated in RCC, oncocytoma and benign renal tissue using a tissue microarray (published in[26]). Paraffin sections were cut at 5 μm thickness, deparaffinized using xylene and rehydrated in graded ethanol. Slides were placed in citrate buffer (pH 6.0) for UQCRC1 and Tris/EDTA buffer (pH 9.0) for UQCRFS1 and heated for 10 min at boiling temperature (microwave 600 W). After 30 min resting time and cooling for 15 min the endogenous peroxidase activity was blocked with 3% hydrogen peroxide for 10 minutes. The sections were washed with Tris-buffered saline and Tween 20 (Merck). The slides were incubated with the primary antibodies (UQCRFS1 1:200; UQCRC1 1:100) at 4°C overnight. Signal detection was performed with Dako Envision+ System-HRP Labeled Polymer (Dako, Hamburg, Germany) and the slides were finally counterstained using Meyers haematoxylin.

The staining was evaluated by 3 investigators (AG, MB, MP) and in case of disagreement, the scoring was discussed at a multi-headed microscope. The staining intensities were scored from 0-3, 0 being no staining to 3 being maximum staining. The expression of the target proteins was also recorded for the sub-compartments (proximal/distal tubules, collecting duct, loop of Henle) in the normal tissues.

The NextBio database (Illumina, San Diego, CA, USA) was used to analyze the expression profile of the mitochondrial complex III subunits in ccRCC. The retrieval strategy for the comparison of normal renal and ccRCC tissue included the parameters “human”, “mRNA” and “fresh frozen tissue”. The last database query was performed on 20th August 2015.

The tissue samples were collected within the framework of the Biobank of the Center for Integrated Oncology Cologne Bonn at the University Hospital Bonn.

The authors disclose any conflict of interest.