In order to get further information about the molecular characteristics of histiocytic and dendritic cell neoplasms and to learn more about the nature of the correlation between such group of tumors and lymphoma/leukemia, we investigated the clonal status of 33 samples that included LCH, LCS, FDCS, IDCS, and HS. Twenty eight of these cases were sporadic without a history or concurrent with lymphoma/leukemia, while three cases were with a past history of T-cell lymphoma, one case was followed extraosseous plasmacytoma, and one case was concomitant with diffuse large B-cell lymphoma (DLBCL).

All patients enrolled in this study ranged in age from 8 to 74 years (median, 42 years). Among 33 patients, 20 were male and 13 were female. The demographic and clinical characteristics of LCH, LCS, FDCS, IDCS and HS were listed in Table 1, respectively. The most common primary site of LCH was bone. And in our study all 5 cases of HS occurred in lymph node. As shown in the Table 1, tonsil was the most common extranodal site of FDCS.

Table 1: Clinical Characteristics of all samples

Thirteen cases of LCH contained a large number of cells with the characteristics of grooved, folded or lobulated nuclei. A variable number of eosinophils, neutrophils, histiocytes and small lymphocytes were scattered among tumor cells. Compared to LCH, 2 cases of LCS showed considerable pleomorphism, nuclear atypia, and high mitotic activity. Furthermore, eosinophils were decreased so that in some area they were difficult to be found. In LCH and LCS, tumor cells were typically stained positive for CD1α and S-100 (Figure 1A-1D).

The tumor cells of the two cases of IDCS were mainly polygonal, ovoid shaped. And they arranged in a diffuse pattern with numerous intermingled lymphocytes. The cytoplasm was abundant and the cyto-membrane was unclear. The nuclei were vesicular and the nucleoli were conspicuous and varied in size from small to large. Immunohistochemically, tumor cells showed S-100 positive, but CD1α negative (Figure 1H-1J). 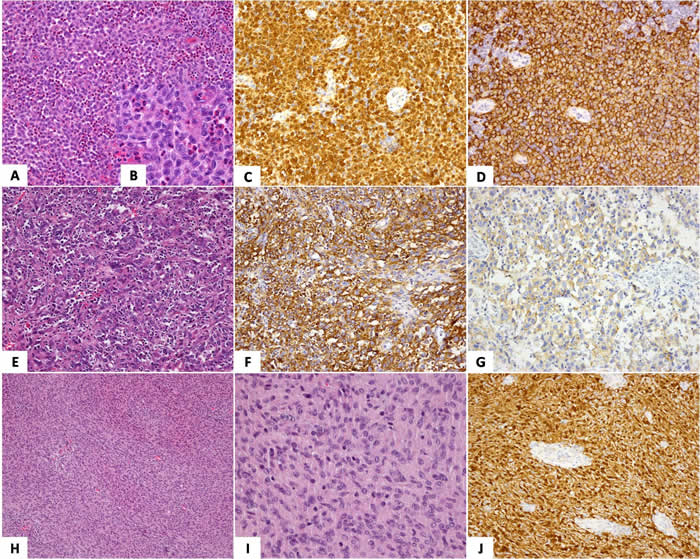 The detailed results are shown in Table 2. 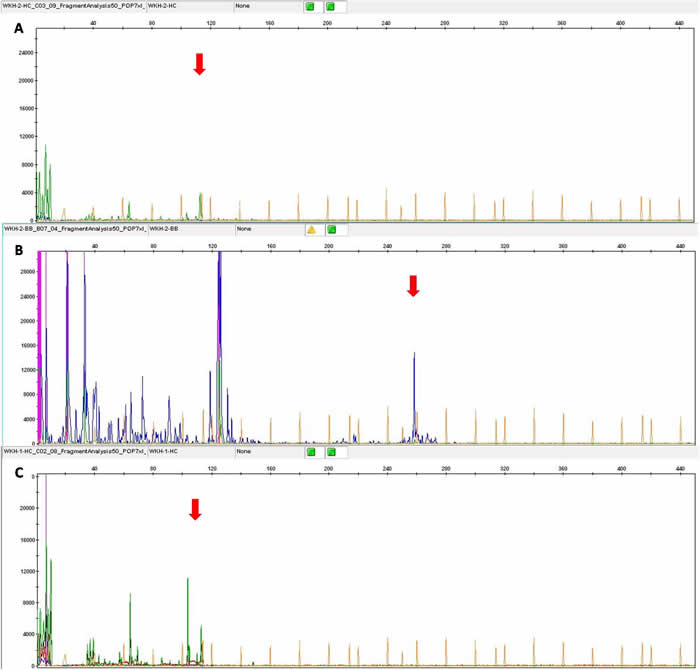 Histiocytic and dendritic cell neoplasms are a group of rare tumors originating from common precursors in the hematopoietic and lymphoid system. Due to their extremely low incidence, the recognition of such group of neoplasms is limited, especially in their genetic characteristics. In the past twenty years, some cases of LCH or HS or FDCS reported in patients who also had T or B-cell lymphoma/leukemia [8, 9, 12] or myeloid sarcoma/leukemia [14]. And these cases showed that the two different hematopoietic neoplasms in the same patient had identical genetic abnormalities, indicating a clonal relationship between the two different types of neoplasms. Among these rare reported cases, most of them were LCH/LCS or HS developing in patients with synchronous or metachronous lymphoblastic leukemia/lymphoma of T- or B-cell lineage [8, 10, 16, 17]. So it was speculated that tumor cells in lymphoblastic neoplasms are precursor cells, which might have more lineage plasticity than other mature lymphoid tumor cells [18]. Moreover, although histiocytic and dendritic cell neoplasms occurring in patients with mature B-cell lymphoma were extremely rare, a few cases have successively been reported. The related mature B-cell lymphoma included follicular lymphoma (FL), extranodal marginal zone B-cell lymphoma of mucosa-associated lymphoid tissue (MALT lymphoma) and chronic lymphocytic leukemia/small lymphocytic lymphoma (CLL/SLL) [12, 18-20]. Therefore, based on these results of reported cases, the description of genetics of HS, IDCS and FDCS was modified in 2008 WHO classification, in which it was written that rare cases were reported to show antigen receptor gene rearrangements, suggesting a process of transdifferentiation [1]. After that, several cases of histiocytic and dendritic cell neoplasms were also reported to have the same B or T cell receptor gene rearrangements and chromosomal aberrations as the associated lymphoid neoplasms [21-29]. However, a high frequency of clonal immunoglobulin receptor gene rearrangements was also detected in sporadic histiocytic/dendritic cell sarcomas without either a past history or a concurrence of any type of lymphoma. It was thought that a large subset of histiocytic/dendritic cell sarcomas might have inherited B-cell genotypes and originally be derived from committed B-cell progenitors [15]. Hence, there were two main speculations about the clonal receptor gene rearrangements in histiocytic and dendritic cell neoplasms. One was the tumor lineage switching: it was said that one tumor cell might transdifferentiate into another [8, 27, 30]. And the other was the two tumor lineage, which arises by malignant transformation of a common stem cell.

In order to further understand the genetic characteristics of such group of tumors, we detected not only clonal IGH/IGK but also TCRβ/TCRγ gene rearrangements in 33 cases of histiocytic or dendritic cell neoplasms. These 33 cases were divided into two groups. One group was the sporadic cases having no history of any type of lymphoma/leukemia. And another group was associated with lymphoma. In the sporadic cases, our results showed clonal IGH/IGK or TCRβ/TCRγ gene rearrangements in more than half of LCH, FDCS and HS, which was similar to the previous findings [15]. But compared with that, we also detected TCRβ/TCRγ gene rearrangements, and found there was a high frequency of T-cell receptor gene rearrangements in histiocytic and dendritic cell neoplasms as well. Thus, our findings demonstrated that clonal receptor gene rearrangements were a common phenomenon in this series of hemopoietic tumors. In addition, 4 of 11 (36.4%) LCH cases and 2 of 9 (22.2%) FDCS cases in our study showed both B and T cell receptor gene rearrangements concurrently in all 28 sporadic cases. More interestingly, one case of FDCS concurrent with DLBCL showed the same clonal IGH gene rearrangement in both the two distinct tumor populations and clonal TCRβ in only FDCS tumor cells. All these findings seemed to provide an evidence to support the view that histiocytic and dendritic cell neoplasms were developed from lymphoid -committed progenitors, and two different types of neoplasms might be derived from a common precursor and differentiate towards two different directions under pathological conditions. Meanwhile, experimental research based on mouse model also showed that epidermal Langerhans cells were generated from mouse lymphoid-committed CD4low precursors with the capacity to differentiate into T cells, B cells, CD8+ lymphoid dendritic cells, and natural killer cells. So the author hypothesized that Langerhans cells belong to the lymphoid lineage [31]. ,

But it was worthy to note that immunoglobulins had been detected in a variety of cancer cells [32], such as breast, colon, lung, liver, cervical and oral cancers, and also in acute myeloid leukemia [33]. Besides, it was revealed that these immunoglobulins may involve in cell survival and promote tumor growth and migration [34, 35]. Therefore, we speculated that clonal receptor gene rearrangements detected in histiocytic and dendritic cell neoplasms might not necessarily mean that these neoplasms were derived from a lymphoid precursor. Instead, they might play an important role in tumorigenesis of histiocytic and dendritic cell neoplasms.

In short, for unknown reason, there was a high frequency of clonal IG and T-cell receptor gene rearrangements in histiocytic and dendritic cell neoplasms. It may serve as a novel tumor marker for developing target therapy.

All samples were formalin-fixed paraffin embedded (FFPE) and reviewed to confirm for the diagnosis based on hematoxylin and eosin (H&E)-stained sections and immunohistochemical staining according to the 4th edition of the WHO Classification of Tumors of Haematopoietic and Lymphoid Tissues by two experienced hematopathologists (H.W. and F.X.).

The case of FDCS concurrent with DLBCL and other cases involving lymph node were first microdissected on the paraffin sections to separate the tumor tissue and population avoiding contamination. Genomic DNA was extracted from paraffin-embedded tumor tissues using QIAamp® DNA Mini Kit (Qiagen, Germany), according to the manufacturer’s instructions. Quality and concentration of the DNA samples were examined by NanoDrop (Thermo). BIOMED-2 polymerase chain reaction (PCR) was performed to analyze the clonal expansion of T and B cells using IdentiClone™ T and B-Cell Clonality Assays (Invivoscribe, America). T-cell clonal expansion was detected by analysis of TCRβ and TCRγ gene rearrangement and B-cell clonal expansion by IGH and IGK gene rearrangement. The PCR products were analyzed using capillary electrophoresis on an ABI 3500XL genetic analyzer (Applied Biosystems). Appropriate positive and negative controls were included in all experiments.

17. Egeler RM, Neglia JP, Aricò M, Favara BE, Heitger A, Nesbit ME, and Nicholson HS. The relation of Langerhans cell histiocytosis to acute leukemia, lymphomas, and other solid tumors. The LCH-Malignancy Study Group of the Histiocyte Society. Hematol Oncol Clin North Am. 1998; 12: 369-78.