Schizophrenia is a chronic, severely debilitating mental disorder. Approximately 1% of the population suffers the torment of schizophrenia [1], and it is reportedly the 8th leading cause of disability among people aged 15 to 44 years, worldwide [2]. The exact pathogenesis of schizophrenia remains unknown and, despite large numbers of trials of potential therapies, the efficacy of pharmacological treatments is poor for many schizophrenia patients [3]. Although the gender ratio among patients is nearly equal, females tend to have a later onset than males, and an earlier onset in females almost associated with a family history of schizophrenia [4]. Lichtenstein et al estimated the heritability of schizophrenia to be 64% [5].

A total of 499 schizophrenia cases and 500 unrelated healthy controls were enrolled in our study. The demographic data for the cases and controls are shown in Table 1. The mean ages were 67.11 ± 9.24 years and 64.31 ± 8.91 years for the case and control groups, respectively. As shown in Table 2, 13 SNPs were analyzed, and two (rs10761482 and rs3808942) displayed significant deviation from the Hardy-Weinberg equilibrium (p < 0.05); We used the Pearson Chi-squared test to compare the different allele frequency distributions between the cases and controls and found that rs958852 was significantly associated with a 0.75-fold reduction in the risk of schizophrenia (95%CI 0.58–0.97; p = 0.025) (Table 2).

Table 1: Characteristics of cases and controls in this study n (%)

ap was calculated by exact test

b p was calculated by Pearson Chi-squared test

Table 3: Logistic regression analysis of the association between SNPs and schizophrenia risk n (%)

Table 4: Comparisons of genotypes of some special SNPs and their associations with schizophrenia risk

p values were calculated from Wald’s test adjusted by age and gender. 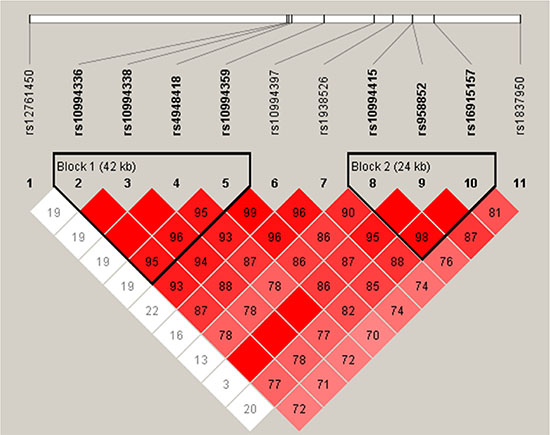 a p value from were calculated from two-sided Chi-squared test.

b p values were calculated by unconditional logistic regression adjusted for age and gender.

In this case-control study, we investigated associations between genetic variations in ANK3 and schizophrenia risk in a relatively large sample of individuals. Four susceptibility loci from ANK3 (rs10994336, rs10994338, rs4948418 and rs958852) were significantly associated with schizophrenia risk in a northern Chinese Han population for the first time. We also found that the “TTC” haplotype of ANK3 is associated with a 0.73-fold reduction in the risk of schizophrenia.

Many earlier studies focused on gene-related mechanisms or other potential causes for schizophrenia. Okazaki et al [22] suggested that an imbalance in the immune system contributes to the pathophysiology of schizophrenia. Brown et al reported that cardiovascular disease is the most important natural cause of death among schizophrenia patients [23, 24]. Hjelm et al suggested that the genetic etiology of schizophrenia must be strikingly complex, as they were unable to identify any special gene associated with schizophrenia [25]. Several studies have reported that ANK3 plays an important role in the pathogenesis of schizophrenia. ANK3 is reportedly a neurodevelopmental gene [26] that encodes ankyrin-G (ANKG), which is important for the stability of the neuronal membrane [27]. Notably, the neurodevelopment hypothesis has become the mainstream hypothesis of the etiology of schizophrenia [28]. What’s more, ANKG associates with Nav1.5 and recruits the channel to the myocyte membrane, and impaired Nav1.5 function caused by low ANKG levels leads to sinus node dysfunction, conduction defects, and ventricular arrhythmia [29]. This is consistent with the earlier report that cardiovascular disease is a frequent cause of death among schizophrenia patients. At the same time, ANK3 was found to be associated with bipolar disorder in the large collaborative GWAS [30], and Cassidy et al suggested that schizophrenia and bipolar disorder share common pathogenic pathways [13], as evidenced by the genetic overlap between schizophrenia and bipolar disorder [31].

Rs10994336 was identified as a significant susceptibility locus for bipolar disorder in study of 4,387 cases and 6,209 controls [32], and in a mate analysis [33]. One UK study tried to investigate whether the SNP loci significant in bipolar disorder are also significant in schizophrenia, but they failed to demonstrate a significant association between rs10994336 and schizophrenia risk. In the present study, we observed that rs10994336 is associated with an increased risk of schizophrenia in a northern Chinese Han population. We suppose the difference between our findings and those of the UK study reflects the difference in the ethnic groups.

Associations between rs10994338 and rs4948418 and bipolar disorder have also been previously reported [33, 34]. In present study, we found that rs10994338 and rs4948418 were associated with an increased schizophrenia risk in the northern Chinese Han population. We also found a new significant SNP, rs958852, which appears to reduce the risk of schizophrenia. To our knowledge, this is the first report of an association between ANK3 rs10994336, rs10994338, rs4948418 and rs958852 and schizophrenia risk in a northern Chinese Han population. Our findings suggest ANK3 may play an important role in schizophrenia. It is anticipated that future studies will clarify the precise contribution of ANK3 to schizophrenia, which may offer a new strategies for the prevention and treatment of schizophrenia.

Although there are important discoveries revealed in our study, there are also some potential limitations. First, we selected SNPs with p values higher than 5% in the HWE test. This approach may exclude some SNPs reported to be significantly associated with schizophrenia in previous studies. Second, our study lacks biological function experiments, which will be crucial for elucidating the role of ANK3 in schizophrenia.

We recruited a total of 499 (263 males, 236 females) northern Han Chinese patients diagnosed with schizophrenia between 2011 and 2015. All the subjects were treated at the Xi’an Mental Health Center. All patients were diagnosed and histologically confirmed to suffer from schizophrenia based on the criteria from the DSM-IV (Diagnostic and Statistical Manual of Mental Disorders, the fourth version). The patients had no history of cancer, nephropathy, infection, or other related disease. In addition, to serve as a control sample, 500 (192 male, 308 female) healthy unrelated individuals were recruited from among the Han Chinese living in and around Xi’an city. All of the chosen controls were from the Medical Center in the Affiliated Hospital of Tibet University for Nationalities.

The study protocol was approved by the Human Research Committee of the Xi’an Mental Health Center for Approval of Research Involving Human Subjects. Informed consent was obtained from all subjects. All subjects were interviewed by a nurse who collected detailed information about gender, age, region, ethnicity, smoking status, education status, working environment, pressures experienced, family history, and other lifestyle factors.

Statistical analyses were performed using the SPSS version 16.0 statistical package (SPSS, Chicago, IL, USA) and Microsoft Excel. All p values were two-sided, and values of p ≤ 0.05 were considered significant. The genotype frequencies for each SNP in the control subjects were checked using the Hardy-Weinberg equilibrium (HWE). Chi-squared test or Fisher’s exact test was used to calculate the allele and genotype frequencies among cases and controls. Associations between the genotypes and schizophrenia risk were estimated by computing odds ratios (ORs) and 95% confidence intervals (CIs) evaluated in three genetic models (dominant, recessive, additive model) using unconditional logistic regression adjusted for age and gender. We determined p values for trend by entering the variable as a single term in the model (i.e., one degree of-freedom) and testing using Wald’s test. Finally, the Haploview software package (version 4.2) and SHEsis software platform (http://analysis.bio-x.cn/myAnalysis.php) were used for estimate the pairwise linkage disequilibrium (LD), haplotype construction, and genetic association at polymorphism loci.

In sum, we confirmed a positive association between ANK3 and schizophrenia and also demonstrated that four ANK3 variants (rs10994336, rs10994338, rs4948418 and rs958852) are associated with schizophrenia in a northern Chinese Han population. Further evidence will be needed to confirm this interaction in a wider population, and to determine the role of ANK3 in the development of schizophrenia.