Purpose: This study is to investigate the use of dynamic contrast-enhanced magnetic resonance imaging in predicting early response to CRT (chemo-radiotherapy) in patients with larynx and hypopharynx carcinoma from primary tumors.

Method: Sixty-two patients with larynx and hypopharynx carcinoma underwent two DCE-MRI studies: a baseline exam before any treatmentanda post-treatment exam 3 weeks after CRT. At the end of treatment, patients were classified as responders, or non-responders according to the Response Evaluation Criteria in Solid Tumors criteria (RECIST). The time intensity curves (TIC) were extracted and processed to obtain time to peak (TTP), maximum slope of increase (MSI), maximum slope of decrease (MSD) and positive enhancement integral (PEI), and the semi-quantitative MRI parameters were compared and analyzed between the two groups.

Conclusion: The semi-quantitative DCE-MRI may aid in the prediction of early response to CRT in patients with larynx and hypopharynx carcinoma.

Larynx and hypopharynx carcinoma are common malignant neoplasms in head and neck squamous cell carcinoma (HNSCC). The incidence of hypopharynx carcinoma was lower than that of larynx carcinoma. As the disease advances there is an increase in comorbidities. The overall survival is relatively poor because of high rates of regional recurrence and distant metastasis [1].

Dynamic contrast enhanced MRI (DCE-MRI) better reveals the relationship between blood perfusion and tumor hypoxia as compared to alternative imaging methods such as DWI, MRS, and PET-CT [5-6]. Angiogenetic alterations cause changes in the parameters of vascular physiology (perfusion, blood volume, and capillary permeability) and DCE MRI is reveals the progress of angiogenesis and provides information of vascularization at the tissue level. DCE-MRI holds promise for predicting and monitoring treatment response for HNSCC, several DCE-MRI studies have shown favorable outcomes for HNSCC with high vascularity on the pre-treatment DCE-MRI [8-14], and however few studies studied the DCE-MRI derived parameters on larynx and hypopharynx carcinoma.

The current study was aimed to investigate whether semi-quantitative analysis of DCE-MRI data from primary tumors may provide useful information regarding larynx and hypopharynx carcinoma response to chemo-radiotherapy. 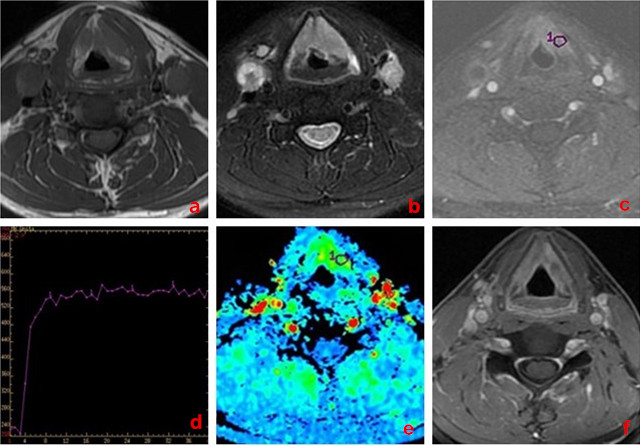 Table 2: Pretreatment DCE-MRI semi-quantitative parameters for the responders and non-responders 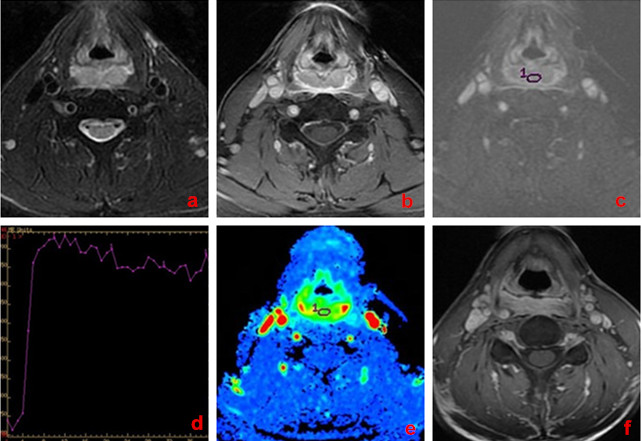 Table 3: Posttreatment DCE-MRI semi-quantitative parameters for the responders and non-responders

Differentiation of responders from non-responders 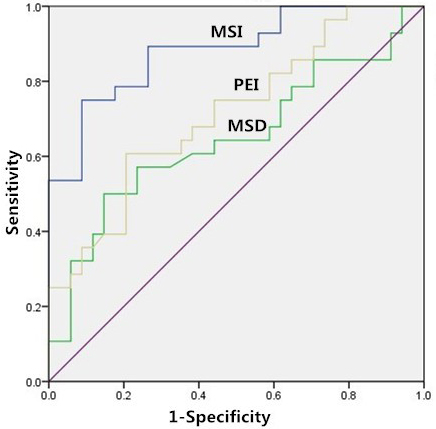 In this study, the use of semi-quantitative parameters derived from DCE-MR imaging data for prediction of treatment response to chemo-radiation therapy in patients with larynx and hypopharynx carcinoma was investigated. Our preliminary results indicated that higher pre-treatment MSI, MSD, PEI and lower post-treatment MSI, MSD, PEI may be associated with good response to chemo-radiotherapy in larynx and hypopharynx carcinoma. While pre- and post- treatment TTP both did not differ significantly between the responders and non-responders. The ROC curve analysis indicated that, when both sensitivity and specificity were optimized, the threshold of pretreatment MSI value in best predicting tumor’s chemotherapeutic response was 154.81 and the corresponding AUC, sensitivity, and specificity were 0.882, 89.3% and 73.5%, respectively. These results suggest that the semi-quantitative DCE-MRI parameters have a potential as prognostic biomarkers for predicting the early therapeutic response in larynx and hypopharynx carcinoma.

In the current study, patients with disease responsive to chemo-radiation therapy was observed to have significantly higher pre-treatment and significantly lower post-treatment MSI, MSD and PEI in primary tumor regions as compared to patients with no response. These results are consistent with the idea that vascularization at the tissue level and tumor hypoxia in solid tumor may be closely related to chemo-radiotherapy sensitivity [30-31]. Lower TTP values were also observed both pre- and post- treatment in primary tumors regions of responders as compared to those in non-responders, however without statistical significance (P > 0.05). The results in this study are in line with previous reports and support the hypothesis that tumors with relatively higher blood volume and blood flow are associated with increased oxygenation levels leading to better access to chemo-radiation [5]. On the other hand, tumor hypoxia adversely influences treatment response [19]. In a recent DCE-MRI study [32], an inverse correlation was observed between semi-quantitative parameters of DCE-MRI {maximal enhancement ratio (MER), slope of enhancement (SLE) } and hypoxia in in a maxillofacial VX2 rabbit model; this finding suggests that high tumor blood flow and volume are associated with low levels of hypoxia.

There are several limitations in this study. Firstly, this study only evaluated the short-term response rather than the long-term survival outcomes with disease-free survival status. Therefore, future studies with long-term follow-up survival outcome are desired for further confirmation. Secondly, a validation cohort is desirable for improved completeness of studies with predictive outcomes. This is however limited by the patient group available in this study. Thirdly, only the pre-treatment DCE-MRI parameters were analyzed, but the changes of these parameters pre- and post- treatment were not compared. This would be desirable for overall exploration of the utilities of the semi-quantitative DCE MRI parameters. Lastly, it would be interesting to have comparison between semi-quantitative and fully quantitative parameters in this case.

Semi-quantitative DCE-MRI parameters, especially the pretreatment MSI measurements, show significant difference between responders and non-responders in larynx and hypopharynx carcinoma and may thus be used for predicting the treatment outcomes.

All patients underwent 2 MRI exams, first exam was performed prior to any treatment at the baseline and second study was performed within 3 weeks after completion of CRT. At the end of the treatment, patients were evaluated and classified as responders or non-responders according to the Response Evaluation Criteria in Solid Tumors (RECIST) criteria, based on their MRI measurement15. Patients were considered as responders when all assessable tumors completely disappeared or partially reduced ( ≥ 30% of in the sum of maximal diameters) on the follow-up MRI. On the contrary, patients were considered non-responders if measurable tumors were relatively stable ( < 30% reduction or < 20% increase in the sum of maximal diameters) or progressed ( ≥ 20% increase of original tumor or appearance of new lesions).

Before the contrast media injection, baseline images were obtained. After initiation of DCE acquisition, Gadodiamide injection (Omniscan, GE, Ireland) was intravenously injected at a dose of 0.1mmol/kg of body weight with a rate of 2.0ml/s, followed by a 20 ml saline flush with a power injector. Patients were instructed not to swallow, move their tongues, open their mouths, or make any other voluntary motion during the DCE-MRI acquisition. Following the DCE-MRI scan, post-contrast enhanced anatomical T1-weighted images were acquired as a part of the routine clinical examination.

Time intensity curves (TIC) were also obtained, and time to peak (TTP), maximum slope of increase (MSI), maximum slope of decrease (MSD) and positive enhancement integral (PEI) were calculated as previously described [16-17]. DCE-derived parameters were calculated and measured blindly by one radiologists with 5-years of experience in head and neck imaging. The regions of interest (ROIs) were manually placed on each tumor area, avoiding visually large cystic or necrotic areas. The TTP, MSI, MSD and PEI values in each ROI were calculated and the average over all three ROIs were used for analysis, and ROI area was 30~50 mm2.

All measurements are presented as mean ± standard deviation (mean ± SD). Normality test for DCE-MRI parameters were done using the Kolmogorov-Smirnov test. The Student t test and Mann-Whitney U tests were used to compare the pre- and post-treatment DCE parameters (TTP, MSI, MSD and PEI), and parametric differences were tested using the statistical method of analysis of variance (ANOVA). ROC analyses were also used to ascertain the best discriminatory model in differentiating responders from non-responders. Diagnostic accuracy was determined using the values of area under curve (AUC), and the predicting cutoff value, sensitivity, and specificity were calculated as well. All statistical analyses were performed using SPSS (version19; IBM SPSS; Chicago, IL), with a 2-tailed probability value, P < 0.05 was considered statistically significant.

The authors declare that they have no conflicts of interest to disclose.