Conclusion: Bariatric surgery for T2DM is efficacious and improves short- and long-term outcomes as compared with non-surgical treatment.

Type 2 diabetes mellitus (T2DM) is a disease with high prevalence, associated with severe co-morbidities as well as being a huge burden on public health [1]. Strict glycemic control is known to decreases long-term morbidity and mortality [2]. The current standard therapy for T2DM is medical treatment which cornerstone is intensive lifestyle modification strategies [3]. However, only partially patients achieve adequate glycemic control and a reduction in cardiovascular risk [4-6].

Bariatric surgery has recently emerged as new therapeutic approach for patients with T2DM. Several observational studies [7-10] and randomized controlled trials(RCTs) [11-17] have shown T2DM remission after bariatric surgery [18]. But until recently, it is not fully understood the etiology of diabetes remission following bariatric surgery. Also, these trials have some limitations, such as a small sample size of the various types of surgery, uncertainty the durability of the metabolic benefits of surgery, long-term safety, quality of life, and effects on diabetes-related end-organ disease. These studies could inevitably increase the risk of bias being responsible for their conclusions, and more strong evidences are still needed to support the results of these studies.

The meta-analysis can test hypotheses about sources of differences and assess the magnitudes of biases when used to compare results from different studies. So, we performed a meta-analysis to obtain comprehensive estimates of the clinical benefit from all of the available data. This meta-analysis identified and screened the short-term and long-term results of bariatric surgery compared with non-surgical treatment for T2DM in RCT studies.

A total of 816 articles were identified in a combined search of the electronic databases covering studies published before June 15th 2016. 693 studies were in total excluded after title/abstract screening, then 55 studies were excluded following a further review full-text of the remaining 63 studies. In the end, 8 studies [12, 19-25] were included in this meta-analysis. Figure 1 demonstrated a flow chart of the selection process.

Table 1: Basic characteristics of 8 studies included in this meta-analysis

Table 2: Description of patients at baseline from the 8 studies included in the meta-analysis 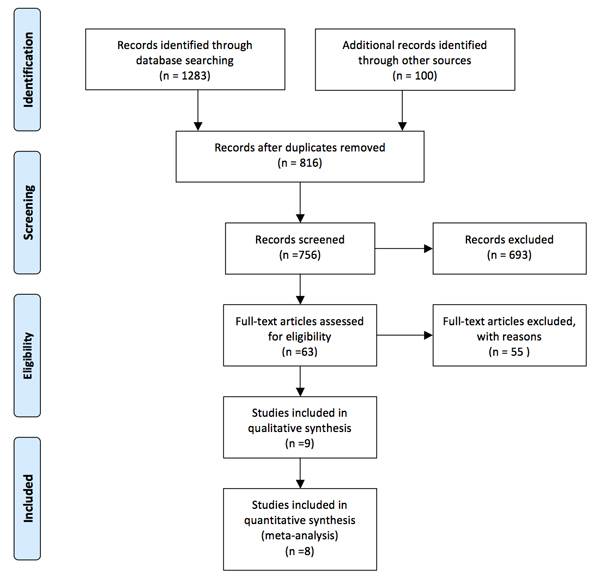 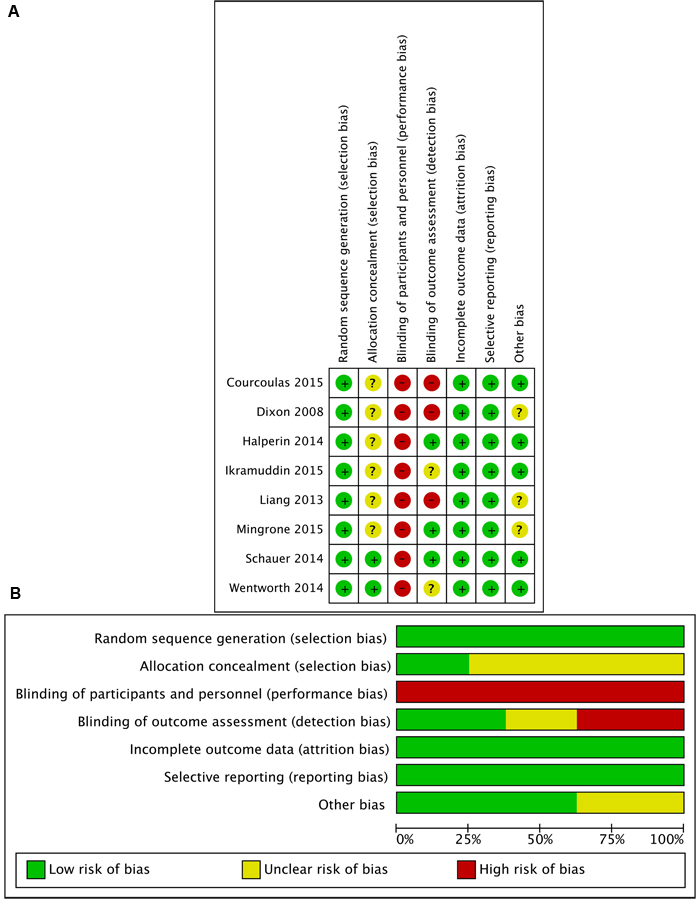 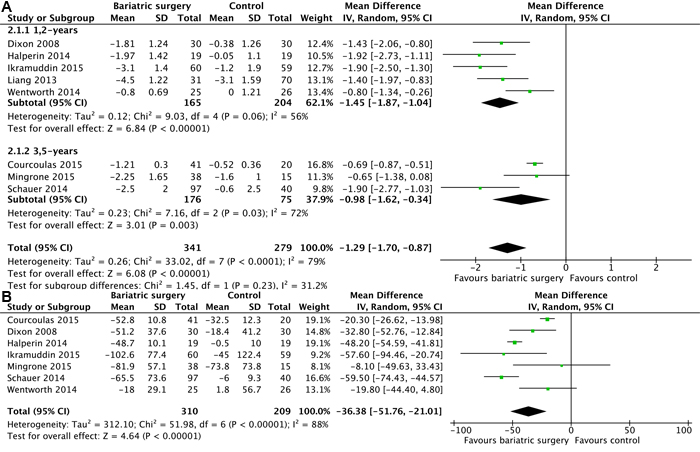 Figure 3: Mean changes in glycemic control after bariatric surgery versus non-surgical treatment (control) for Type 2 diabetes mellitus. A. HbA1c levels (% points) B. fasting plasma glucose (mg/dL) (A conversion factor of 18 was used to convert values from mmol/L to mg/dL.). 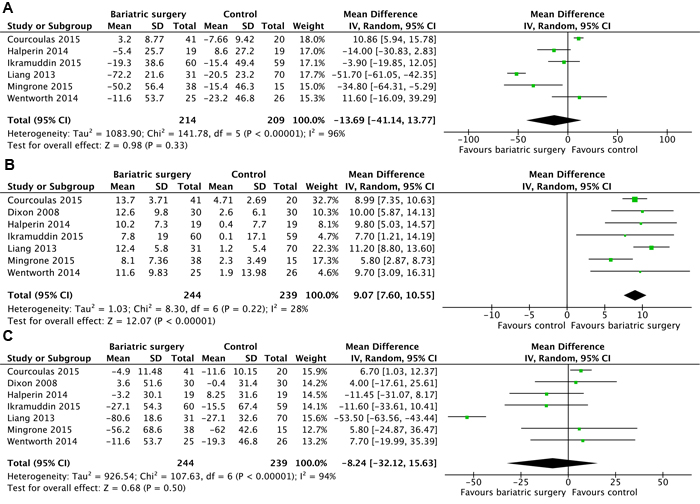 Figure 6: Mean changes in triglyceride concentrations (mg/dL) after bariatric surgery versus non-surgical treatment (control) for Type 2 diabetes mellitus. (A conversion factor of 88.55 used to convert values from mmol/L to mg/dL).

With respect to long-term outcomes, three endpoints including T2DM remission, quality of life, and adverse events were taken into analysis.

There were 3 studies [20, 23, 24] reported quality of life which was assessed by the 36-Item Short Form Health Survey (SF-36). Schauer 2014 reported that five of eight mental and physical domains improved more among patients in the gastric-bypass group and two of eight domains in the sleeve-gastrectomy group, as compared with the medical-therapy group [24]. Halperin 2014 reported that SF-36 total scores were no significantly difference between bariatric surgery group and non-surgery group in at 1 year [20]. Mingrone 2015 reported that surgical patients scored significantly better than medically treated patients for all subdomains of quality of life and for the total score domains [23].

There were 6 studies [12, 19, 21, 23-25] reported the adverse events. There was no heterogeneity (P = 0.58, I2 = 0%) among the studies, so a random effect model was used. Our outcome was prone to a higher adverse events rate in bariatric surgery compared with non-surgical treatment for T2DM (RR = 2.08, 95%CI: 1.53 to 2.81, P < 0.00001) (Figure 8). However, early surgical complications were relatively benign. There were no perioperative deaths and no late surgical complications in bariatric surgical groups after 1-year follow-up. The only 5-year follow-up study reported that five major complications of diabetes (including one fatal myocardial infarction) arose in four (27%) patients in the medical group compared with only one complication in the bariatric surgery groups. [23]

The publication bias in this meta-analysis was assessed by funnel plots to evaluate the reliability. However, the results of these tests are not reported, because this method is known to be unreliable when there are fewer than 10 studies in the meta-analysis [27] and because our qualitative analysis indicated a high likelihood of reporting bias.

With respect to short-term outcomes, bariatric surgery acquired more reduction HbA1c, FPG, BMI, weight, and triglyceride, more increase HDL cholesterol. However, changes of LDL and total cholesterol were no significantly different. Moreover, there were no perioperative deaths and no late surgical complications in bariatric surgical groups. This meta-analysis demonstrates that bariatric surgery for T2DM is more efficient than non-surgical treatment.

Our results are supported by two systematic reviews. A review and meta-analysis from 2013 [30] included three randomized controlled trials. It showed greater weight loss, glycemic control, and diabetes remission during 1 to 2 years of follow-up after bariatric surgery compared with non-surgical treatment. The other review and meta-analysis from 2014 [28] included 5 RCT studies and 11 observational studies and had similar results.

There are several limitations in this meta-analysis. Although the number of available RCTs was noteworthy, the evidence is insufficient to reach conclusions that bariatric surgery is the preferred treatment for T2DM than non-surgery treatment. Most of included studies were relatively small sample sizes and lack of long-term results. Only 3 studies had follow-up longer than 3 years [19, 23, 24]. Additionally, many of the studies were from single a single site, which may affect generalizability. A greater number of larger and even more definitive studies would have increased this study’s predictive strength.

Another limitation was the diversity of T2DM diagnosis and remission standards reported. Many studies determined T2DM outcomes idiosyncratically; the majority of studies did not define T2DM remission uniformly, some employing American Diabetes Association criteria, and others only biochemical marker of glycemic control. A uniform standard for reporting T2DM remission is needed to improve the scientific evidence base and support clinical decision making.

In conclusion, our meta-analysis summarizes the best available evidence for short- and long-term results in directly comparative research studies of bariatric surgery vs non-surgical treatment in T2DM patients. This study demonstrates that bariatric surgery is associated with greater improvements in T2DM remission, HbA1c and fasting plasma glucose levels, weight loss, and hyperlipidemia than non-surgical treatment such as medications, diet, and behavioral changes for patients with T2DM. However, results are limited to a small number of studies and individuals and lack data about the durability of benefit. To fully characterize the efficacy of bariatric surgery for T2DM, the evidence calls for further research on larger, well design, and long-term outcomes studies.

We performed a comprehensive search in PubMed, Embase and Cochrane Library databases to identify all relevant studies available from their inception to June 15th 2016. We also searched trial registries of ongoing trials.

The search strategy followed the identification and screening guidelines established by the Preferred Reporting Items for Systematic Reviews and Meta-Analyses (PRISMA) statement. The search terms included (“diabetes or diabetic*” or “diabetes mellitus”) and (“bariatric surgery” or “metabolic surgery” or “diabetes surgery” or “gastric banding” or “sleeve gastrectomy” or “gastric bypass” or “duodenal switch” or “biliopancreatic diversion”) and (randomized controlled trial). These terms were used in different Boolean combinations. Limits set to govern the searches stipulated journal articles on adult humans written in the English language. All eligible studies were retrieved, and the reference lists of the identified studies and reviews were evaluated or additional studies.

All data were analyzed using Review Manager version 5.3 for Mac. RR along with 95% CI was calculated for dichotomous data, and MD along with 95% CI was calculated for continuous data. The mean change of the included studies from baseline to end of follow-up was calculated. Missing standard deviations were derived from other statistics, such as P values or confidence intervals if needed [31]. For example, P = 0.00001 was assumed when a P value was reported as P < 0.00001. When only a range was reported, a formula was used to estimate Standard deviation (SD): Estimate SD = Range/4 (15 < n < 70); Range/6 (n > 70), and median was approximately equal to mean [32]. Heterogeneity among combined study results was assessed by Cochran’s Q test and by the degree of inconsistency (I2). A random effect model was used if P < 0.05 and I2 > 50%. Otherwise, data were pooled by using the fixed effect model [27]. In the integration results, P < 0.05 indicated statistical significance. Publication bias in outcomes was assessed and treated using standard methodology. Publication bias was analyzed using a funnel plot.

Z.T., G.W., and B.C. conducted and design of the study, acquisition of data, analysis and interpretation of data, discussed the idea of the meta-analysis, drafted the manuscript, submitted the paper. F.Y. and Z.F. completed the database searches and selected, screened, and reviewed the articles. W.Z., X.F., and H.Z. reviewed and extracted the data, and performed the data analyses. All authors reviewed the paper and approved the final manuscript. Z.T. had primary responsibility for final content.