Conventional ultrasound cannot satisfactorily distinguish malignant and benign thyroid nodules. Shear-wave elastography (SWE) can evaluate tissue stiffness and complement conventional ultrasound in diagnosing malignant nodules. However, calcification of nodules may affect the results of SWE. The purposes of this study are to compare the differences of shear-wave speed (SWS) measurement among different calcification groups and compare the diagnostic performance between using a single uniform SWS cutoff value and multiple individual calcification-specific cutoff values using technique of point SWS measurement. We retrospectively identified 517 thyroid nodules (346 benign and 171 malignant nodules) examined by conventional ultrasound and point SWS measurement. There were 177 non-calcified, 159 micro-calcified and 181 macro-calcified nodules. The diagnostic performance was evaluated by receiver operating characteristic (ROC) curve and area under the curve (AUC) was computed. The mean SWS in malignant nodules more than doubled that of benign nodules (4.81±2.03 m/s vs. 2.29±0.99 m/s, p<0.001). The mean SWS of nodules progressively increased from the non-calcification (2.60±1.49 m/s), to micro-calcification (3.27±1.85 m/s) and to macro-calcification (3.68±2.26 m/s) groups (p<0.001), which was true in both the benign and malignant nodules. If we used individual SWS cutoff values for non- (SWS >2.42 m/s), micro- (SWS >2.88 m/s) and macro-calcification (SWS >3.59 m/s) nodules in the whole group, the AUC was 0.859 (95% confidence interval [CI], 0.826-0.888), which was significantly better than the AUC of 0.816 (95% CI, 0.780-0.848) if a single uniform cutoff value (SWS >2.72 m/s) was applied to all the nodules regardless of calcification status (p=0.011). The cutoff values of SWS for different calcified nodules warrant future prospective validation.

In recent decade, there have been many studies evaluating whether elastography, a non-invasive ultrasound method to measure tissue stiffness, can complement conventional ultrasound in differentiating malignant from benign nodules [8]. Conventional ultrasound images reveal differences in the acoustic properties of soft tissues, whereas elastography is able to reveal the differences in the elastic properties of soft tissues [9]. It is known that cancer tissues are stiffer than normal tissues [8]. There are two types of elastography, strain elastography (SE) and shear-wave elastography (SWE). Conventional SE requires manual compression by the operator, which can only produce semi-quantitative images and cannot precisely measure tissue stiffness. In contrast, SWE includes shear-wave speed (SWS) imaging and point shear-wave speed (pSWS) measurement, which can evaluate the tissue stiffness qualitatively and quantitatively by monitoring the SWS propagation in tissues [9, 10]. A number of studies [11-14] have shown that SWE is a promising complementary ultrasound technique for differentiating malignant and benign thyroid nodules.

Basic characteristics of patients and nodules

@ P values of nonparametric variables were determined by Chi-square test, and P values of continuous variables by independent t test.

@ P values of nonparametric variables were determined by Chi-square test, and P values of continuous variables by one way analysis of variation.

Table 3:The elastography features of differently calcified nodules in benign and malignant groups

@ P values of nonparametric variables were determined by Chi-square test, and P values of continuous variables by one way analysis of variation.

* Determined using one way analysis of variation in the whole and different calcification groups. 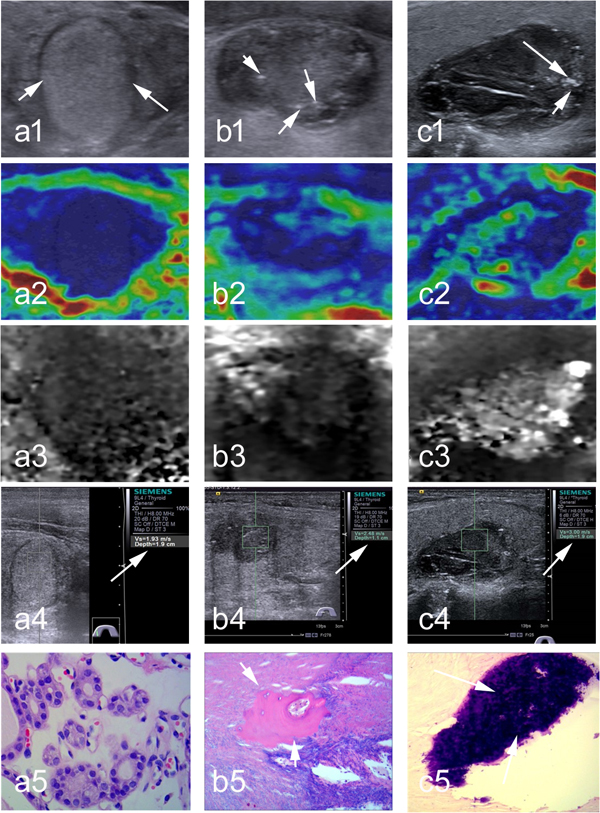 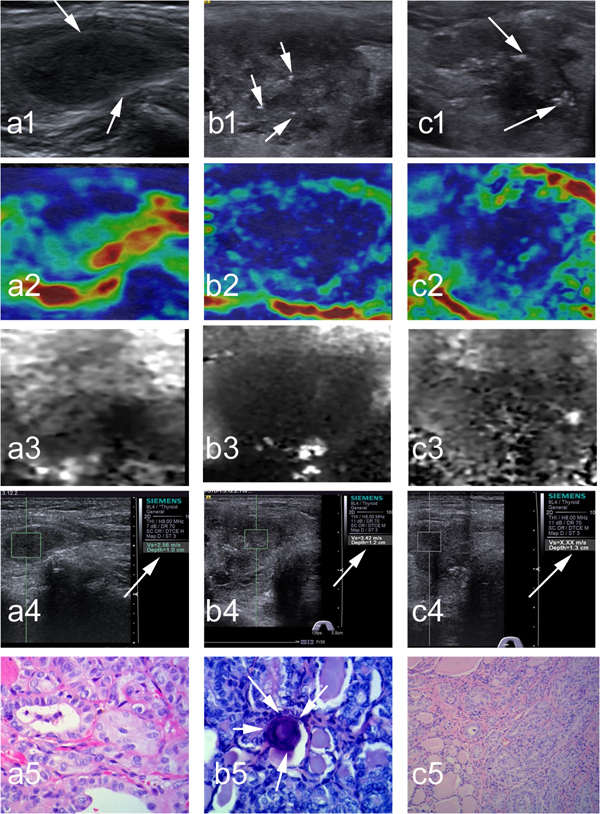 Table 5: Comparing the diagnostic performances of pSWS for thyroid nodules between a single uniform cutoff value and individual cutoff values

* Numbers in parentheses are 95% confidence intervals.

YI is a summary measure of sensitivity and specificity and is widely utilized in studies evaluating accuracy of diagnostic tests [25-27]. To achieve maximum YI, the cutoff values of SWS for thyroid nodules were 2.72 m/s, 2.42 m/s, 2.88 m/s, and 3.59 m/s, respectively in the whole, non-calcification, micro-calcification and macro-calcification groups. These values were in line with those reported in previous literatures (range, 2.42-3.39 m/s) [11, 13, 28-31]. In those previous reports, generally a single SWS value was applied for discriminating malignancy in the whole nodules. Our study suggests individual cutoff values of SWS according to varied calcifications in nodules.

This study had a couple of limitations. Firstly, this was a single center, retrospective study. The cutoff values of SWS in different calcification groups warrant future multi-center, prospective validation. Secondly, we did not quantify the level of calcifications in nodules but broadly categorized nodules into three groups.

All patients were retrospectively identified from patients who came to Shanghai Tenth People’s Hospital of Tongji University School of Medicine for thyroid examination. From January 2014 to November 2015. A total of 1,145 consecutive patients with 1,522 thyroid nodules received the examinations of conventional ultrasound, SE and point SWS measurement. Among these patients, 671 patients with 690 nodules met the following enrollment criteria: (1) had fine needle aspiration (FNA) cytology and/or surgery histology within a month after examinations; (2) the size of nodule was ≥10 mm in the greatest dimension; (3) solid nodules at B-mode ultrasound images; and (4) with complete medical information and no surgery treatment performed on the nodules before. Then, 172 nodules were excluded for the following reasons: (1) inadequate cytologic results and without surgery histology (n=42); (2) indeterminable cytologic results and without surgery histology (n=55); (3) being diagnosed as “suspicious for papillary thyroid carcinoma” only at cytologic examination but did not undergo surgery histology (n=23); (4) nodules with annular-like peripheral macro-calcification and/or crescent-like peripheral macro-calcification (n=21); and (5) clustered micro-calcification or macro-calcification foci cannot be completely avoided when measuring the SWS (n=31). Finally, 517 thyroid nodules in 498 patients were included in the analyses, including 346 benign nodules in 330 patients and 171 malignant nodules in 168 patients. Of the 346 benign nodules, 301 nodules were diagnosed by cytology and 45 nodules by surgery histology. Of the 171 malignant nodules, 26 nodules by cytology and 145 nodules by surgery histology (including 135 papillary thyroid carcinomas, 4 follicular thyroid carcinomas, 3 medullary carcinomas and 2 anaplastic carcinomas). This study was approved by the Ethical Committee of the Shanghai Tenth People’s Hospital of Tongji University School of Medicine, and the requirement to obtain informed consent was waived.

B-mode ultrasound, SE and point SWS measurement for thyroid were performed with the same S2000 ultrasound instrument (Siemens Medical Solutions, Mountain View, CA, USA). A 9L4-linear transducer (frequency range, 4-9 MHz) was used for thyroid examination. The patients were placed in a supine position with dorsal flexion of the neck. The gain, focus position and depth of instrument were adjusted appropriately to ensure that the nodules displayed completely and conspicuously on the screen. Detailed procedures of examination were described previously [11].

All the images of B-mode ultrasound, SE, and point SWS measurement were analyzed in the same setting and in a blind manner by two experienced thyroid radiologists (B.J.L. and X.L.L.) .The identification of patients, clinical results and pathology results were anonymous to the investigators. In case of disagreement in the evaluation between the two radiologists, a third senior radiologist (B.D.C.) reviewed the images to make the final decision.

The conventional SE score of nodules was classified with a five-score system: score 1, the entire nodule is soft; score 2, part of nodule is hard; score 3, only margin of nodule is soft; score 4, the entire nodule is hard; and score 5, the entire nodule and surrounding area are hard, according to the most recent guidelines and recommendations for clinical use of elastography by the World Federation for Ultrasound in Medicine and Biology [9]. Acoustic radiation force impulse (ARFI) SE grade for the thyroid nodules was divided into grade 1 to 6: grade 1, predominantly white; grade 2, predominantly white with few black portions; grade 3, black and white portion equally; grade 4, predominantly black with a few white spots; grade 5, almost completely black, and grade 6, completely dark, as we recently described [11].

For point SWS measurement, among 7 measured values of SWS for nodule and surrounding tissue, the maximum value of SWS was used as the first parameter. Then, the maximum and minimum values were eliminated, and the average of remaining 5 values was used as the second parameter of SWS. Previous reports have shown that five measurements were sufficient to assess thyroid stiffness [32, 33]. According to the manufacturer’s suggestion and relevant reports [11, 34-36], the measurement result of “X.XX m/sec” was replaced by 0 m/s or 8.4 m/s, with 0 m/s corresponding to the cystic portion and 8.4 m/s corresponding to the solid portion. The SWS ranged from 0.35 m/s to 8.40 m/s in this study.