p16 is the principal member of the INK4 family of cyclin-dependent kinase (CDK) inhibitors [1]. As a regulatory protein of the cell cycle, p16 is involved in the G1-to-S phase transition. Upon binding to CDK4/6, p16 inhibits formation of the cyclin D1-CDK4/6 complex and CDK4/6-mediated phosphorylation of the retinoblastoma (RB) protein. Once RB is phosphorylated, the E2F-RB complex dissociates, leading to reduced growth-suppressor activity of RB [2]. Like RB, p16 is known as a tumor suppressor. p16 maintains RB family members in a hypophosphorylated state [2-5]. However, it is difficult to explain many aspects of p16 function and regulation by its well-known function as a tumor suppressor alone. In addition, molecular pathways responsible for p16 function and expression have not yet been determined.

Conflicting patterns of p16 expression have been reported, which further complicates the understanding of its biological and pathological roles. In different types of neoplasms, p16 expression is either lost or downregulated [6-9], or clearly overexpressed [10-13]. p16 expression has been analyzed in some studies of gynecological malignancy. According to the 2014 World Health Organization (WHO) Blue Book, 60% of ovarian high-grade serous carcinomas show diffuse, strong p16 expression [14]. p16 and p53 expression levels are used as differential markers to distinguish high-grade serous carcinoma from other histological types of ovarian carcinoma. It is well known that p16 overexpression occurs in human papillomavirus (HPV)-related tumors [1, 14]. p16 overexpression indicates high-risk HPV infection, not only in uterine cervical carcinoma and head and neck carcinoma, but also in high-grade squamous intraepithelial lesions (HSILs) of the vulvovaginal and anogenital regions; therefore, p16 is used as a diagnostic marker for both HSIL and invasive squamous cell carcinoma [1, 15]. Similarly, in breast carcinoma, high p16 immunoreactivity is significantly correlated with more undifferentiated and malignant phenotypes (i.e., estrogen receptor negativity and higher nuclear grade) [13]. Moreover, p16 staining intensity and expression are significantly higher in uterine leiomyosarcoma compared with benign uterine leiomyoma or uterine smooth muscle tumors of uncertain malignant potential [16].

This preliminary study was conducted with 91 patients who underwent surgical excision for benign, borderline, or malignant neoplasms of the ovary from March 2015 to May 2016. The age of patients ranged from 23 to 61 years (median, 42 years) in patients with benign lesions, from 25 to 66 years (median, 48 years) in patients with borderline lesions, and from 28 to 82 years (median, 53 years) in patients with malignant lesions. None of the patients received pre-operative neoadjuvant chemotherapy, radiation therapy, or concurrent chemoradiation therapy. Classification of all 91 cases according to degree of malignancy of ovarian neoplasms resulted in 24 (26.4%) cases in the benign group, 21 (23.1%) cases in the borderline group, and 46 (50.5%) cases in the malignant group. According to histological type, the 91 cases were classified into serous type (29 cases; 31.9%), mucinous type (25 cases; 27.5%), Brenner type (5 cases; 5.5%), and endometrioid-associated type (32 cases; 35.2%). The endometriosis-associated type included the endometrioid type (17 cases; 53.1%), clear cell type (8 cases; 25.0%), and seromucinous type (7 cases; 21.9%). Seromucinous tumors are defined as benign cystic neoplasm (seromucinous cystadenoma), non-invasive, proliferative epithelial neoplasm (seromucinous borderline tumor, formerly known as endocervical-type or Mullerian mucinous borderline tumor) or carcinoma (seromucinous carcinoma) with two or more epithelial cell types, all accounting for at least 10% of the epithelium. The epithelium lining the cysts or papillae is composed mostly of serous or endocervical-type mucinous epithelium, but endometrioid, squamous, and clear cells may be seen [14]. Histological types were classified following the criteria of the WHO Classification of Tumours of Female Reproductive Organs, revised in 2014 [14]. 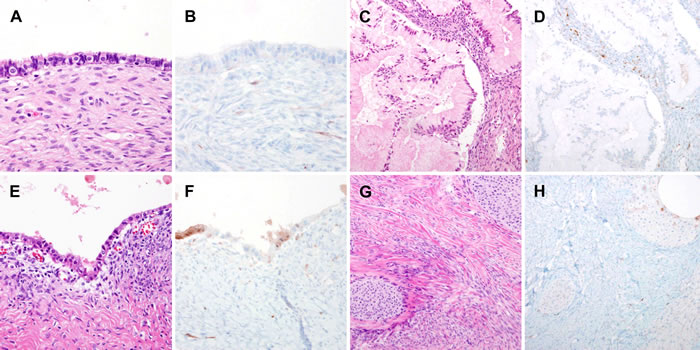 p16 immunostaining scores of benign, borderline, and malignant ovarian neoplasms are presented in Table 1. Representative photomicrographs of stromal p16 expression in benign ovarian neoplasms are presented in Figure 1. All 24 cases of benign ovarian neoplasm showed a p16 immunostaining score of 3 or less. Of the 24 cases of benign lesions, 14 (58.3%) cases showed no p16 expression, whereas 7 (29.2%) cases, 2 (8.3%) cases, and 1 (4.2%) case had scores of 1, 2, and 3, respectively. No significant difference was observed in stromal p16 expression status among the different histological types (P = 0.688). Of 6 cases of endometriotic cysts, 4 (66.7%) were found to have patchy and weak cytoplasmic p16 immunoreactivity in endometrial-type epithelial cells lining the cystic space. Similarly, 1 of 3 (33.3%) benign Brenner tumors showed patchy and weak p16 expression in the tumor cell cytoplasm. 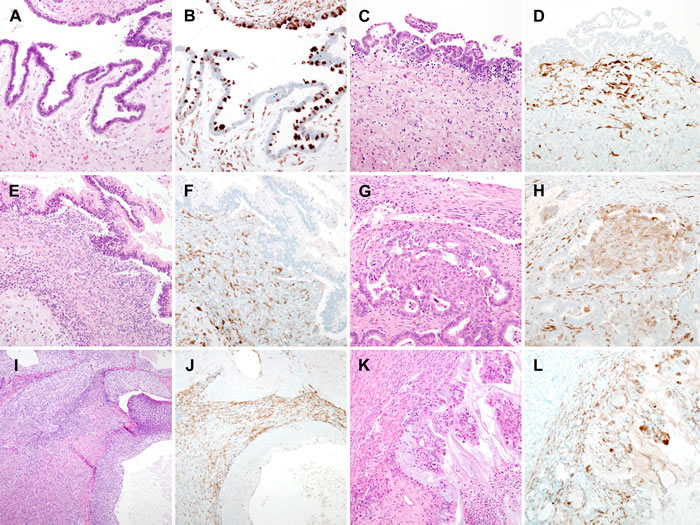 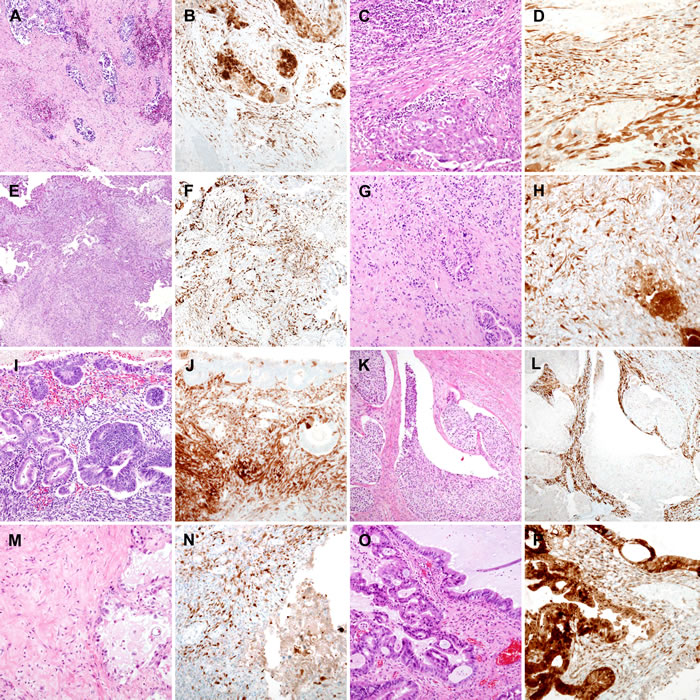 When ovarian neoplasms were classified by histological type without considering degree of malignancy, the p16 immunostaining scores varied from 0 to 9 points (Table 4). The mean p16 immunostaining scores of serous, mucinous, Brenner, and endometriosis-associated ovarian neoplasms were 4.3, 4.2, 2.2, and 5.4, respectively. No significant difference in stromal p16 expression was observed among the histological types. In addition, there was no statistically significant difference in stromal p16 expression between high-grade serous carcinomas and non-high-grade serous carcinomas (P = 0.267).

The resection specimens were fixed in 10% neutral-buffered formalin and embedded in paraffin blocks. From each formalin-fixed, paraffin-embedded block, 4-μm sections were cut and stained with hematoxylin and eosin. Two independent pathologists examined all available hematoxylin and eosin-stained slides by routine light microscopy and chose the most representative formalin-fixed, paraffin-embedded block to perform immunohistochemical staining.

The percentage of p16-positive stromal cells and the staining intensity were assessed. A cut-off index was defined as the presence of 10% or more cells displaying nuclear p16 immunoreactivity, as previously described [23, 26]. The estimated percentages were categorized as follows: less than 10% (score 0), 10% to 24% (score 1), 25% to 50% (score 2), or 50% or more (score 3). The staining intensity was graded as follows: negative (score 0), weak (score 1), moderate (score 2), or strong (score 3). The subcellular location of p16-positive signals (nuclear or cytoplasmic) was also estimated. The final score was calculated as the multiplication of percentage and staining intensity, resulting in scores of 0, 1, 2, 3, 4, 6, and 9 [27].

A linear-by-linear association test was performed to compare the status of stromal p16 expression between histological types and to determine whether stromal p16 expression was significantly different according to degree of malignancy. Statistical analyses were performed using the SPSS Software Package (version 18.0; IBM SPSS, Chicago, IL, USA). Statistical significance was set at P < 0.05.

This study was supported by a new faculty research seed money grant from the Yonsei University College of Medicine for 2016 (2016-32-0020).