Lung cancer with mediastinal lymph node metastasis is more likely to develop recurrence and metastasis after complete resection and targeted therapy is a promising treatment strategy. We performed amplification refractory mutation system (ARMS) fluorescence quantitative PCR to detect the gene status of EGFR, ALK, ROS1 and RET in resected samples from 280 patients who were confirmed to have primary lung adenocarcinomas with N1-N2 lymph node metastasis. Of the 280 patients enrolled, the frequency of EGFR mutations, ALK fusions, ROS1 fusions, RET fusions and no mutations was 42.9%, 10.7%, 1.8%, 3.6% and 42.9%, respectively. Five patients exhibited the coexistence of the EGFR and ALK alterations. ALK, ROS1 and RET fusions were mutually exclusive. The frequency of EGFR mutation was significantly lower among patients with poor differentiation, while the rates of ALK and ROS1 fusions were the opposite. RET fusions also tended to be more prevalent in poorly differentiated patients. EGFR and ALK double positive tumors were characterized by significantly smaller size compared with those had single gene alteration. Our study comprehensively analyzed the distinct and common clinicopathologic characteristics according to genotypes of the cohort, which should help in categorizing patients for efficient screening.

Although diagnosis at an early stage is increasing and therapeutic methodology is progressing, lung cancer remains the leading cause of cancer-related deaths worldwide [1]. Over the last decade, great achievements have been made in our understanding of lung cancer. With the identification of oncogenic driver mutations, the therapy for non-small cell lung cancer (NSCLC), especially lung adenocarcinoma has undergone a revolutionary change [2].

Epidermal growth factor receptor tyrosine kinase inhibitors (EGFR-TKIs), such as gefitinib and erlotinib, have been used against advanced NSCLCs with EGFR mutations, demonstrating remarkable improvements in patient outcome. Crizotinib, the ALK/MET TKI, has shown dramatic therapeutic effects against lung cancer with anaplastic lymphoma kinase (ALK) rearrangements. More recently, ROS1 and RET fusions have attracted much attention, as they were both identified in approximately 1%-2% of patients with NSCLC. Crizotinib has been approved by FDA for the treatment of metastatic ROS1 positive NSCLC. Clinical trials are underway to investigate the therapeutic effects of cabozantinib and vandetanib against NSCLC harboring RET fusions [3]. All of these achievements highlight the importance of matching targeted therapy to the genetically defined subgroups of patients. However, the frequency of these alterations, especially the fusion genes is comparatively low. Thus, identifying the enriched population is of significance for efficient screening. Previous studies have reported the clinical and pathologic features according to genotype. However, the opinions remain controversial. This may be due to the different nature of the study cohorts, as many of the cohorts are unselected NSCLCs or adenocarcinomas. Moreover, comprehensive studies of alteration-specific and common clinicopathologic features are rare [4].

As far as we know, the extent of lymph node involvement in NSCLCs is the most important prognostic factor and influences treatment strategy [5]. NSCLC with lymph node metastasis is more likely to develop recurrence and metastasis after surgical resection and have a shorter survival time after recurrence [6]. It is necessary to test the gene status of NSCLCs after resection with regional lymph node metastasis. Targeted therapy has changed the therapeutic strategy for advanced-stage NSCLC, and interest in moving targeted therapy from advanced-stage patients to early-stage patients has triggered a heated debate. Studies are currently underway, including the SELECT, RADIANT and ALCHEMIST studies [7, 8]. However, the status of targeted therapy in adjuvant treatment is controversial. Even so, recurrence and metastasis do occur, and many patients are potential candidates for targeted therapy.

To gain a comprehensive understanding of oncogenic driver mutations and their associated clinicopathologic characteristics of this special cohort, we concurrently investigated EGFR, ALK, ROS1 and RET alterations in samples from 280 lung adenocarcinoma patients with N1-N2 lymph node metastasis and analyzed the common and specific clinical features of different molecular alterations.

The mutation status and coexistence of EGFR, ALK, ROS1 or RET

Table 2: The genotypes of 280 lung adenocarcinomas with lymph node metastasis

The clinicopathologic characteristics of the cases with EGFR mutations, ALK, ROS1 or RET fusions were listed in Table 3 and Supplementary Table S1. 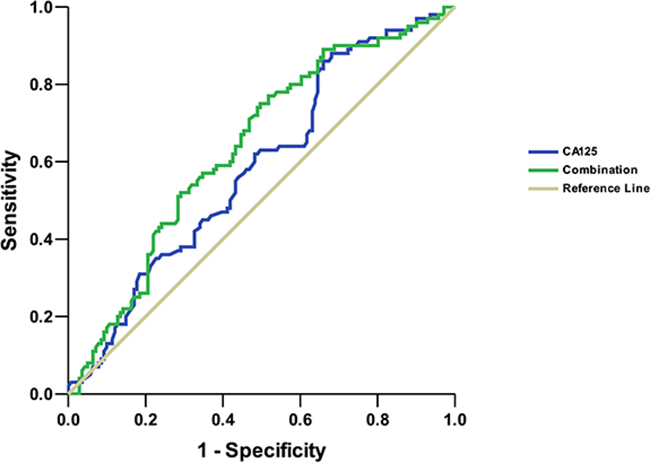 Figure 2: Receiver operating characteristics (ROC) curve analysis for CA125 level and a combination of CA125, gender and differentiation as predictors of EGFR mutations in lung adenocarcinomas with lymph node metastasis.

On the basis of the genotype, the patients were classified into three distinct groups: the EGFR group, the fusion (ALK/ROS1/RET) group and the WT/WT/WT/WT group. The five patients who exhibited the coexistence of ALK fusions and EGFR mutations were not included. The differentiation of the fusion group was significantly different from that of the EGFR group and WT/WT/WT/WT group (P<0.001, P=0.003) (Figure 3). In patients with poor differentiation, the rate of fusions (ALK/ROS1/RET) was 32.7% (17/52), tended to be higher than that of EGFR mutation 19.2% (10/52), however, with no statistical significance (P=0.117). Females were more popular in EGFR group compared with the WT/WT/WT/WT group (P=0.011) (Supplementary Table S2). 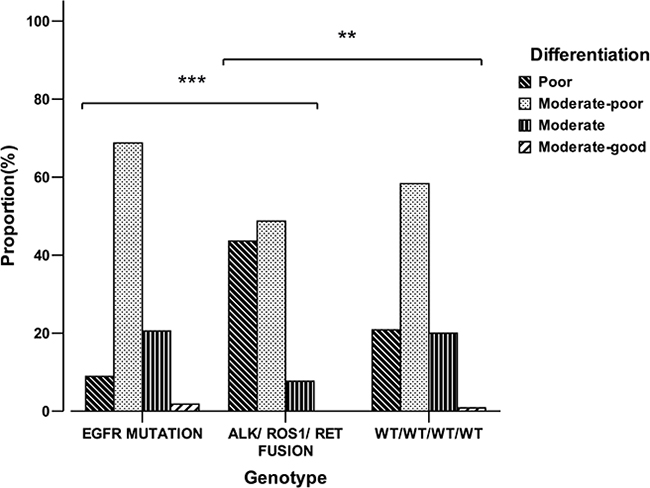 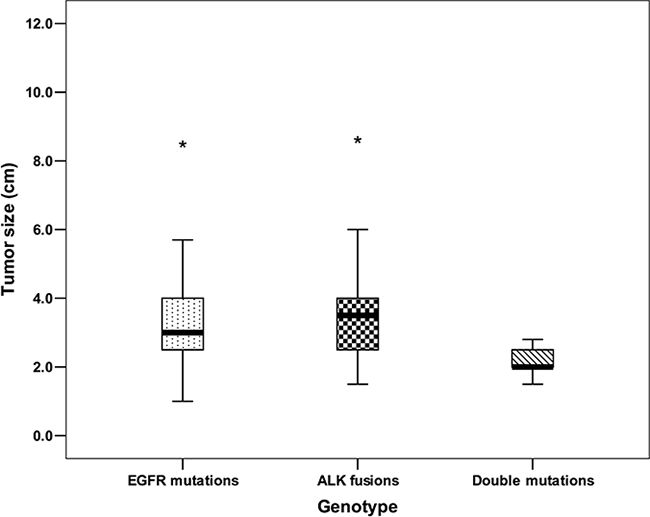 Here, we performed a comprehensive analysis of the correlation between the well-identified driver mutations and clinical characteristics of the lung adenocarcinomas with mediastinal lymph node involvement. We identified that the frequencies of EGFR, ALK, RET and ROS1 were 42.9%, 10.7%, 3.6% and 1.8%, respectively. The rate of ALK fusions was higher than reported. In addition, we found that the tumors exhibited mainly poor and poor-moderate differentiation, which was consistent with previous studies [9, 10].

In the present study, we found that the incidence of EGFR mutations was associated with female sex in univariate analysis instead of multivariate analysis, which was in concordance with previous studies [11]. Previous studies reported that ALK-positive patients were more likely to be younger and with higher grade tumors. It appeared to be associated with a higher risk of progression, recurrence and metastases [12, 13]. One study reported that gender, smoking history and N stage were independently associated with ALK fusions [14]. In our study, N0 and N3 patients were not enrolled, and there was no significant difference of the ALK fusions rate between N1 and N2 patients. We also found that ALK-positive patients were younger, which was consistent with previous studies. Patients with ROS1 fusions shared some features in common with ALK-positive patients in previous studies, such as younger age, female sex, never-smoking status, adenocarcinoma, advanced stage and Asian ethnicity [15, 16]. Previous studies revealed that RET fusions were more common among never-smokers and those with adenocarcinoma histology, and the tumors tended to be small in size, poorly differentiated, and represent N2 disease [17]. Despite similar clinicopathologic features, there was no evidence of the coexpression of ALK, ROS1 and RET in the present study.

Previous studies reported that serum CEA levels were associated with EGFR mutations in patients with lung adenocarcinomas [19]. However, our study did not show a correlation of CEA levels with neither EGFR mutations, nor with ALK, ROS1 or RET fusions. Moreover, we found that a lower CA125 level was independently associated with a higher rate of EGFR mutations. The predictive value of a CA125 level on EGFR mutations was limited when it was applied alone, but could be improved when it was combined with other clinical characteristics. One possible explanation is that CA125 is a non-specific tumor marker which can be easily influenced by many different factors. A large series were still required to evaluate the value of a CA125 level on EGFR mutations.

EGFR and ALK are generally considered to be largely mutually exclusive [20, 21]. However, several recent studies identified that EGFR mutations and ALK fusions coexist [22–24]. Our findings showed that EGFR mutations were independent predictive factors for ALK fusions. However, the coexistence of EGFR mutations and ALK fusions were still detected in five cases. EGFR and ALK double positive tumors were characterized by significantly smaller size compared with those had either EGFR or ALK alterations. The finding has not been reported in previous studies.

Our study comprehensively and concurrently analyzed the four oncogenic alterations of adenocarcinomas with mediastinal lymph nodes involvement, which was different from previous studies. However, after the mutation profiling and separation into each subgroup, the number of the samples in each subgroup became quite small. Some possibly existed minor features might be overlooked. In our study, the mutation status was examined by ARMS-PCR. PCR-based method was simple, high-throughput and with high accuracy. But it can’t detect unknown mutations, which would result in a risk of missing some important mutations and their associations. In this retrospective study, the survival analysis was not carried out due to immature survival data, which was its main limitation.

In summary, in the cohort of lung adenocarcinoma with mediastinal lymph node metastasis, differentiation was mainly poor. The coexistence of ALK and EGFR was shown, while ALK, ROS1 and RET was demonstrated to be mutually exclusive. Our study comprehensively analyzed the distinct and common clinicopathologic characteristics according to genotypes of the cohort, which should help in categorizing patients for efficient screening.

Medical records of all patients were reviewed, including age, gender, smoking history, tumor size, TNM stage and preoperative tumor markers, such as the serum carcinoembryonic antigen (CEA) level. Never-smokers were defined as patients who had a smoking exposure of < 100 cigarettes in their lifetime. The clinical and pathological characteristics were reviewed and assessed according to driver oncogenes. The study was approved by the Ethics Committee of the First Affiliated Hospital of College of Medicine, Zhejiang University. The Ethics Committee waived the need for consent for use of the samples in research.

Detection of EGFR mutations and ALK, ROS1 and RET fusions

The correlations between gene mutations and clinicopathologic variables were analyzed. The normally distributed variables were characterized by mean and standard deviation, while nonparametric distributed variables were characterized by median and interquartile ranges. Pearson’s test and Fisher’s exact test were used to compare categorical variables, along with Student’s t test and ANOVA for numerical variables. The Mann-Whitney U and Kruskal-Wallis H tests were performed to assess the differences between nonparametric distributed variables and ordered categorical variables. Factors with P less than 0.05 in the univariate analysis were further analyzed by multivariate logistic regression. All tests were two-tailed, and a P value of <0.05 was set as statistically significant. Statistical analyses were performed with SPSS version 19.0.

This study was supported by research funding from The National Natural Science Foundation of China (No.81472171) and The major project of Science Technology Department of Zhejiang Province, China (No.2012C13022-2).