Colorectal cancer (CRC) is the third most common malignant tumor worldwide, and the cancer-related mortality rate is also as high as forth among all tumors [1]. For AJCC stage III [2] CRC, the five-year survival rate is only approximately 60% [3]. Metastasis is the key cause of mortality from cancer [4, 5]. One of the most important steps in metastasis is cancer cells entering the blood circulation and surviving under harsh circumstances [6]. In contrast to single cancer cells, cancer cell clusters, also called cancer emboli, are more effective in overcoming these dangers, including hemodynamic sheer forces, anoikis (a type of apoptosis triggered by loss of anchorage to the substratum) [7, 8] and predation by cells of the innate immune system [6]. Lymphovascular emboli, also known as lymphovascular invasion, is a risk factor for the prognosis of AJCC stage II CRC [9]. However, the significance of lymphovascular emboli, especially intravascular emboli (IVE) in stage III CRC, remains unclear.

Cancer stem cells (CSCs) are a small subpopulation of cancer cells in tumor tissues with characteristics of stem cells, such as the capacity for self-renewal, multi-lineage differentiation and infinite multiplication [10, 11]. According to the CSC hypothesis, CSCs play a pivotal role not only in tumorigenesis but also in almost all of the steps of metastasis [5, 11, 12]. CSCs might present in lymphovascular emboli in certain tumors, such as breast cancer [13, 14].

In our study, we investigated the influence of IVE and CSCs on the prognosis of stage III CRC patients who received radical surgery and adjuvant chemotherapy, and we analyzed the relationship between IVE and CSCs. The evaluation of CSCs was performed by CD133 immumohistochemical (IHC) staining. 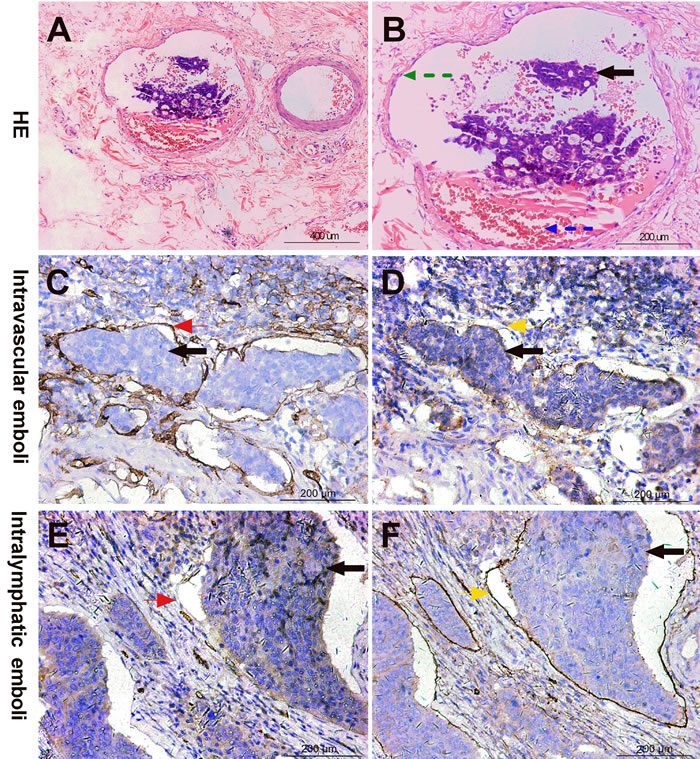 Correlation between IVE and CD133 expression

All the patients were followed up to assess IVE, CD133 expression and clinicopathological characteristics as possible prognostic factors. Of the 323 patients, 109 had metastasis (no-IVE group, 33 versus IVE group, 76, p < 0.001) , and the DFS rate was 66.25%. 84 had cancer-related deaths, and the OS rate was 73.99%. Univariate survival analysis revealed that IVE, CD133 expression, gross tumor morphology, histologic type, pN, sub-class of stage III, and serum CEA, CA199, and CA242 levels were significant prognostic indicators for OS. In multivariate analysis, only IVE (P < 0.001), positive expression of CD133 (P = 0.003) and pN (P = 0.008) remained statistically significant for OS.

Table 2: Univariate and multivariate analysis of 323 CRC patients for OS and DFS 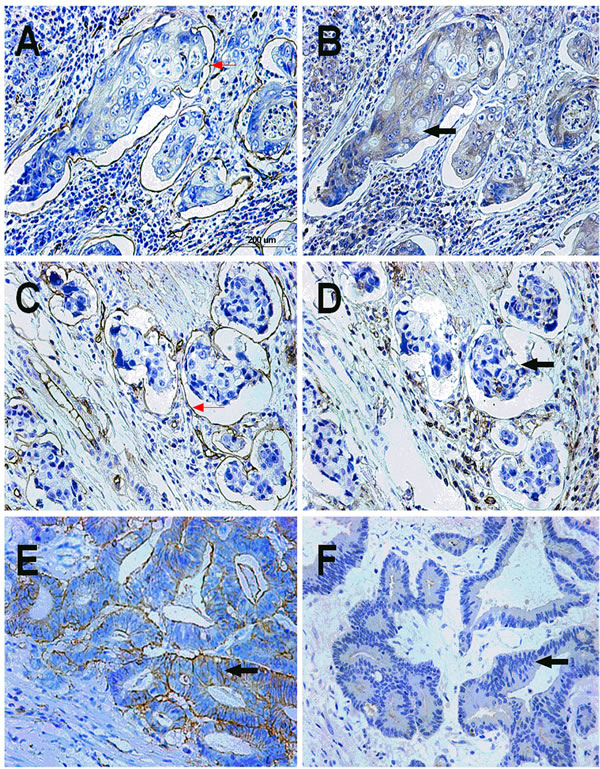 Despite receiving radical surgery and adjuvant chemotherapy, the survival rate of stage III CRC patients remains unsatisfactory [3, 20]. Like other solid tumors, metastasis accounts for most deaths [4, 5]. In our study, 84 (26.01%) died from metastasis during follow-up. Therefore, it is necessary to identify the risk factors for poor prognosis in stage III CRC.

For most solid tumors, metastases are formed following a complex succession of cell-biological events: regional invasion entering transport passageways, such as lymphatic and blood vessels; survival in the circulation; arrest at distant organs; extravasation; micrometastasis formation; and metastatic colonization [6, 21]. Several studies have reported that blood circulation, rather than lymph draining, is the main channel for tumor cell dissemination [5, 22]. Cancer cells face a variety of stresses in the circulation. However, by forming relatively larger cancer cell clusters (cancer emboli), they can simultaneously evade these threats efficiently [6, 23]. Thus, we sought to explore the significance of IVE in stage III CRC. Our study results suggested that IVE might be a reliable predictor of survival in stage III CRC patients after radical surgery.

CRC staging systems remain based on the TNM (Tumor Node Metastasis) classification [2]. The TNM classification emphasizes lymphatic invasion, that is, regional invasion. However, the importance of vascular invasion, a potential metastasis predictor, remains obscure. This might explain why these CRC staging systems can’t predict prognosis very satisfactorily [3]. In our study, multivariate survival analysis revealed that the sub-class of stage III based on TNM classification was not an independent prognosis predictor, and the hazard rate of lymph invasion was less than that of vascular invasion. Therefore, we strongly recommend that the vascular invasion, also known as IVE, should be paid sufficient attention.

Cancer cells adapting to foreign environments and proliferating to colonize metastatic sites is the final step in metastasis [21]. This biological behavior coincides with the central trait of CSCs - the ability to seed new tumors when experimentally planted into appropriate animal hosts [5]. In theory, tumor initiation by disseminated cancer cells at metastatic sites is similar to that by experimentally planted cells. Both processes depend on the ability of cancer cells to act as founder cells and to produce unlimited numbers of descendants. CD133 was successfully used to identify sub-populations of CRC cells with the capacity to initiate tumor growth in immunodeficient mice [18, 24].

As a continuous process, metastasis will not succeed if any step is disrupted. In breast cancer, several studies have found that lymphovascular emboli manifest a stem cell phenotype [13, 14]. Therefore, we presumed that the primary tumors and corresponding IVE that successfully metastasize would possess CSCs and would be positive for CD133 expression. In our study, multivariate survival analysis revealed that CD133 expression was also an independent risk factor for DFS and OS in stage III CRC patients. This result was consistent with those of several previous studies [19, 25, 26]. The χ2 test revealed that CD133 expression was significantly associated with IVE. These results supported our hypothesis.

Chemoradiotherapy resistance is another characteristic of CSCs. In our study, all patients received adjuvant chemotherapy after radical surgery, but there were still a proportion of patients developing metastasis. The CSC theory explains this very well [27, 28]. Several previous studies also found that positive expression of CD133 was associated with chemotherapy resistance in CRC [29, 30].

We collected the consecutive clinicopathological data of stage III CRC patients in the Gastrointestinal Surgery Department, Xiangya Hospital, Central South University, China, between January 2009 and November 2014. The total number of patients who matched the enrollment criteria was 323 (131 cases in the IVE group and 192 cases in the no-IVE group). All of them received radical surgery (total mesorectal excision, TME for rectal cancer and complete mesocolic excision, CME for colon cancer) and adjuvant chemotherapy (FOLFOX4, 48; CapeOX, 29; FOLFIRI, 10; mFOLFOX6, 236). The enrollment exclusion criteria included: neoadjuvant chemotherapy or neoadjuvant chemoradiotherapy before surgery; colorectal cancer with intestinal perforation; refusal to accept adjuvant chemotherapy based on 5-fluorouracil after surgery; synchronous multifocal colorectal cancer; surgery not reaching R0 excision; and incomplete clinicopathological data. The data on serum tumor markers came from the peripheral venous blood of patients admitted before surgery under fasting conditions. We conducted telephone follow-ups every three months. The deadline of follow-up was February 2016. Disease-free survival (DFS) was defined as the interval from radical surgery to recurrence or metastasis, the appearance of secondary colon or rectal cancer, or death, whichever occurred first. Overall survival (OS) was defined as the interval from radical surgery to mortality, or it was censored at the last known date alive.

An intravascular embolus is “a rounded mass of tumor in an endothelium-lined space either surrounded by a rim of smooth muscle or containing red blood cells” [31]. In our study, a minimum of 4 paraffin tumor blocks were used to optimize detection. When we encountered difficulties in identification and distinguishing sample features from lymphatic vessel invasion (LVI) in hematoxylin and eosin (H &E) slices, we marked the blood vessel endothelium and lymphatic vessel endothelium, with CD34 and D2-40 IHC staining, respectively, in serial sections [32, 33]. Because several researchers have reported that a few of the lymphatic vessel endothelium also could be weakly stained by CD34 antibody, we defined the vessel endothelium as the blood vessel endothelium when the staining of CD34 was moderate or strong [34]. All of the slices were simultaneously assessed by two independent pathologists, who then compared their results and jointly reviewed controversial slices. Only the cases on which both pathologists agreed were judged as positive for IVE and were recorded on the pathology report (Figure 1).

Formalin-fixed, paraffin-embedded archived colorectal cancer surgical specimens were sectioned at a thickness of 4 µm in the Pathology Department, Xiangya Hospital, Central South University, Changsha, China. The steps are listed briefly as follows. First, the sections were dewaxed and rehydrated. Then, the sections were immersed in 10 mmol/l sodium citrate buffer (pH = 6), incubated for 10 min on a hot plate (95-99˚C) or boiled and allowed to cool for 20 min to repair the sealed antigen. The sections were then incubated in 3% hydrogen peroxide solution for 25 minutes to block endogenous catalase. After blocking with 3% BSA, the sections were incubated with rabbit polyclonal antibody against human CD133 at a dilution of 1:200 (18470-1-AP, Proteintech, China) overnight at 4˚C, and this was followed by incubation with secondary antibody for 50 minutes at room temperature. The sections were stained with 0.05% diaminobenzidine tetrahydrochloride (DAB) for 5 minutes and then counterstained with hematoxylin, dehydrated and mounted. Negative control sections were stained by omitting the primary antibody.

The specimens were evaluated by two observers who were blinded to the prognosis or other clinicopathological variables. We used a semi-quantitation system for the intensity of staining and the percentage of positive cells. The samples were grouped into the following four categories, based on the intensity of membrane staining: 0. no staining/background equal to the negative controls; 1. weak staining (faint yellow) detectable above the background; 2. moderate staining (yellow); and 3. intense staining (tawny). The labeling frequency was scored as 0 (0%), 1 (1-33%), 2 (34%-66%) or 3 (67-100%). The index sum was obtained by totaling the score for intensity and the percentage. If the final score was equal to or greater than 4, the result was considered positive; otherwise, the result was considered negative. Each slice was randomly verified under 5 high power fields (HPF, ×400), and the average was calculated for scoring.

The associations among IVE status, CD133 expression and clinicopathological parameters were evaluated using the Chi-square (χ2) test. When the subset sample size was small, the corresponding test was conducted using Fisher’s exact test. DFS and OS curves were plotted according to the Kaplan-Meier method; A Cox regression model was used to perform multivariate analysis, parameters of significance in univariate analysis were included in the multivariate analysis. All of the analyses were conducted using SPSS 13.0 software (SPSS, Inc., Chicago, IL). P < 0.05 was considered to be statistically significant. All of the reported P-values were two-sided.

We would like to thank the staff of pathology department who helped to provide the pathological data and sections.