Familial hypercholesterolemia (FH) is a genetic disease involved in lipid metabolism caused by mutations in low-density lipoprotein receptor (LDLR), apolipoprotein B (ApoB) and proprotein convertase subtilisin/kexin type 9 (PCSK9) [1]. FH is clinically classified as heterozygous familial hypercholesterolemia (HeFH) and homozygous familial hypercholesterolemia (HoFH) [2]. The characteristics of patients with FH are elevated plasma level of low-density lipoprotein cholesterol (LDL-C) and increased risk of premature coronary heart disease [3, 4]. Statins are the first-line drugs for treatment of FH [5], but the guidelines recommending LDL-C goals are not achieved despite high-intensity statin therapy [6]. Combined treatment with high-strength statins and ezetimibe or other drugs may help lower LDL-C levels [7, 8], but achieving the treatment targets is difficult [3, 9-11]. As well, some patients fail to adhere to statins treatment because of its side effects [12].

PCSK9 is a kind of serine protease that is synthesized and secreted by the liver; it is expressed in the liver, small intestine, kidney and nervous system [13, 14]. PCSK9 binds to LDLR for LDLR degradation in lysosomes, which eventually elevates the plasma level of LDL-C [15, 16]. PCSK9 is connected to dyslipidemia, especially LDL-C metabolism [17], and is closely related to risk of coronary heart disease.

The FH phenotype is caused by gain-of-function mutations in PCSK9 [3, 15]. Inhibiting PCSK9 has led to potential therapeutic agents for FH [15, 18-20]. The use of PCSK9 monoclonal antibodies can reduce circulating LDL-C level in patients with FH and could be synergistic with statins [21].

Our search retrieved 116 related studies in total; 111 were excluded because they were review articles, letters, animal trials, phase 1 trials, not RCTs, not population with FH, or were not correlated with the present pooled analysis. We included unpublished reports for three clinical trials (ODYSSEY FHI, ODYSSEY FHII and ODYSSEY HIGH FH) (Figure 1). Our final sample included reports for eight studies including 1,879 patients with FH. All eight studies were of good quality (Jadad score≥3). 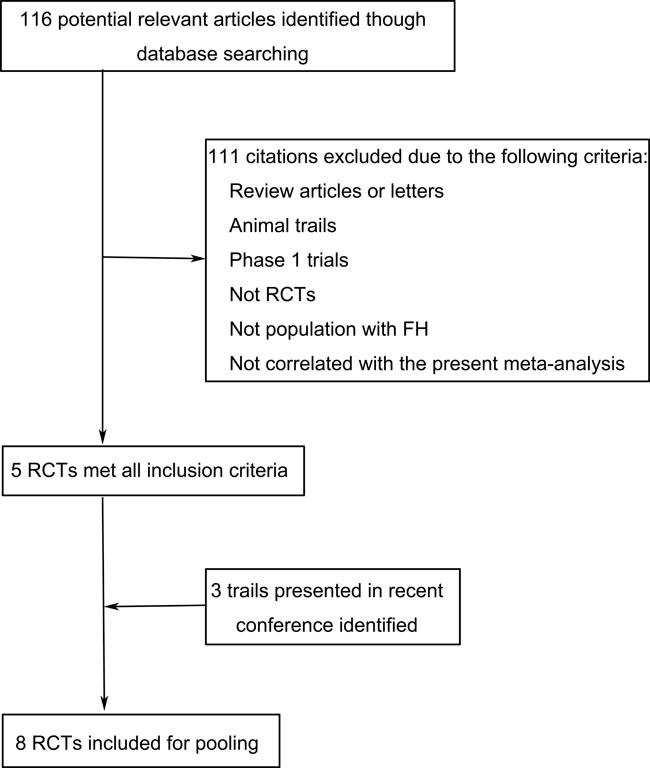 Characteristics of the eight studies are in the Table 1. One study was of HoFH patients and seven were of HeFH patients. Two reports were of phase 2 trials and six were of phase 3 trials; Alirocumab was subcutaneously injected as PCSK9 antibody in five studies and evolocumab in three others; Four trials were 12 weeks and four were > 12 weeks long.

Table 2: Pooled-analysis results of the percentage change in level of serum lipid and the incidence of adverse events.

Sensitivity analysis was used to determine whether exclusion of any single study altered pooled RRs or weighted mean differences (WMDs). We found no heterogeneity for safety outcomes but found heterogeneity for efficacy outcomes, which was not addressed well by sensitivity analysis. Then, we performed subgroup analysis of changes in lipid and apolipoprotein levels after PCSK9 antibody treatment by different PCSK9 antibodies, types of FH and duration of treatment and found that the heterogeneity was caused in part by the different types of FH.

We calculated Nfs0.05 to estimate the publication bias for each comparison and found Nfs0.05 values were greater than the number of studies except for incidence of serious adverse events, death, discontinuation, headache, upper respiratory tract infections and increased AST/ALT and CK included in the pooled analysis. The Nfs0.05 value for several safety outcomes was smaller than the number of included studies, which may be consistent with “small study” bias.

Table 3: Subgroup analyses with regard to the percentage change in plasma level of LDL-C.

In eight phase 2 and phase 3 trials that were eligible for the pooled analysis (1,879 FH patients) [25-29], the clinical adverse events with PCSK9 antibody treatment mainly concerned headache, injection-site reactions, nasopharyngitis, gastroenteritis, nausea, and upper respiratory tract infections. The total rate of adverse events or serious adverse events with treatment did not differ from the control rate. As well, laboratory analyses, including increased ALT/AST ( > 3ULN) or CK ( > 5ULN) levels, did not reveal a significant difference in safety issues between the two treatments. Therefore, on the strength of available data, PCSK9 antibody therapy for FH seems safe and tolerated, but more standardized trials and clinical trials are needed to further verify the safety.

We found great heterogeneity in lipid profile analyses of patients with PCSK9 antibody treatment. On sensitivity and subgroup analyses, the heterogeneity was partly caused by the different types of FH (HoFH or HeFH). Usually, patients with HeFH at least have one normal LDLR allele [3], but in HoFH patients, two LDLR alleles are abnormal [30]. Most HoFH patients are compound heterozygotes with defective LDLR-alleles [31] and others are LDLR-negative. PCSK9 antibodies might be more efficacious in reducing LDL-C level in FH patients with residual LDLR function.

FH is caused by loss-of-function mutations in the LDLR gene, leading to cell uptake of plasma LDL-C blocked by the liver and highly increased serum LDL-C level [3, 32]. Elevated LDL-C level, which is associated with atherosclerosis in affected arteries, is a major risk factor for the occurrence and development of coronary artery disease [33, 34]. Statins reduce the plasma concentration of LDL-C by increasing the hepatic expression of LDLR and removing LDL in circulation. At present, intensive statin therapy is widely indicated as first-line therapy in FH [3] to reduce serum LDL-C level and the risk of coronary artery disease [35]. However, despite high-intensity statin therapy, achieving the recommended treatment targets of LDL-C to prevent cardiovascular events is difficult in most patients with FH [3, 11, 36]. About 10% of patients are unable to tolerate high-intensity statins because of the side effects [37-39].

The RUTHERFORD-2 trial involved 329 HeFH patients with statins, with or without ezetimibe, randomly assigned to receive evolocumab 140 mg subcutaneously every 2 weeks or 420 mg every 4 weeks or placebo [26]. Compared with placebo, treatment with evolocumab biweekly or monthly led to 59.2% and 61.3% reduction in mean LDL-C level, respectively, after 12 weeks.

In the trial of Stein and colleagues, the efficacy and tolerability of alirocumab were evaluated in 77 patients with HeFH in the United States and Canada [27]. Alirocumab at 150 to 300 mg was found generally safe and efficacious. As well, alirocumab dose-dependently reduced LDL-C level by 28.9% to 67.9% versus 10.7% in the placebo group.

The TESLA Part B trial included 50 patients with HoFH who received evolocumab 420 mg or placebo every 4 weeks for 12 weeks; 49 patients actually received the study drug and completed the study [28]. Treatment with evolocumab significantly reduced LDL-C level by 30.9% as compared with placebo.

Moreover, in our analysis, other lipid levels were modified by PCSK9 antibody, including significant decreases in Lp(a), TC and ApoB levels and increase in HDL-C and ApoA1 levels. In addition, TG level was changed, although not significantly. The change in lipid profile is not conducive to the occurrence and development of atherosclerosis [43].

This pooled analysis was conducted following the preferred reporting items of the systematic reviews and meta-analysis (PRISMA) statement. [44]

Studies were eligible for the pooled analysis if they 1) were RCTs, 2) involved human subjects with FH, and 3) compared PCSK9 antibody to no PCSK9 antibody regardless of other lipid-lowering therapy. Studies not meeting these criteria, non-clinical studies, non-RCTs and studies without complete data were excluded.

We performed a literature search of MEDLINE via PubMed, EMBASE, the Cochrane Library databases, ClinicalTrials.gov and Clinical Trial Results (www.clinicaltrialresults.org) for reports of clinical trials and RCTs published in any language up to November 30, 2015, by using the following keywords: “PCSK9” or “proprotein convertase subtilisin/kexin type 9” or “bococizumab” or “AMG 145” or “evolocumab” or ‘REGN727” or “SAR236553” or “alirocumab” and “familial hypercholesterolemia”. Reference lists of relevant trials and reviews were manually checked for additional reports.

Two reviewers (BL and PPH) assessed report eligibility and abstracted data independently by using a standardized report form and evaluated the quality of reports independently following the Jadad scale [45]. Any discrepancies were resolved by consensus.

The pooled analysis involved use of REVMAN 5.3. Heterogeneity among studies was tested by the Cochran Q test and I2 test. A fixed-effects or random-effects model was applied depending on the heterogeneity results [46]: with lack of heterogeneity (P > 0.10 or I2 < 50%), the fixed-effects model was used, and with significant heterogeneity (P < 0.10 or I2 > 50%), the random-effects model was used. Two-tailed P < 0.05 was considered statistically significant, and RR or WMD was reported with 95% CIs. Furthermore, we performed sensitivity and subgroup analyses to lessen the influence of heterogeneity by removing an individual trial or classifying the studies based on similar features. Finally, publication bias was assessed by the fail-safe number (Nfs): risk of publication bias was suggested if the calculated Nfs was less than the number of observed studies. The Nfs0.05 was calculated as Nfs0.05 = (∑Z/1.64)2-k, where “k” is the number of studies in the pooled analysis.