HDAC6, a member of class II histone deacetylase (HDACs) [10–12], is localized in the cytoplasm and the nucleus [10–12]. HDAC6 inhibition possesses anti-tumor and anti-inflammation effects [13–15]. HDAC6 has many endogenous substrates including chaperones and cytoskeletal proteins [16]. Stabilization of cytoskeletal proteins and modulation of chaperones by HDAC6 may protect against endothelial cell injury [16, 17]. Indeed, HDAC6 deletion renders mice less vulnerable to endotoxin-induced inflammatory injury [18]. However, the effects of HDAC6 inhibition on caspase 3 activation and endothelial cell function remain to be determined.

Tubastatin A and CAY10603 are potent and highly selective HDAC6 inhibitors with IC50 of 15 nM and 2 pM in a cell-free assay, respectively [19]. Tubastatin A has been reported to possess anti-inflammatory effects [20–23]. Tubastatin A treatment can prevent stress responses and prolong survival during systemic inflammation [24–28]. 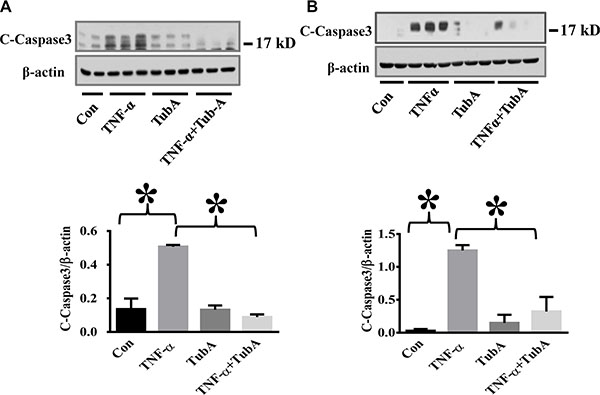 Figure 1: HDAC6 inhibition by Tubastatin A attenuates caspase-3 activation in endothelial cells. HPAECs and HLMVECs were pre-treated with Tubastatin A (TubA, 3 μM) for 6 h, then challenged with TNF-α (20 ng/ml) for 18 h. Cells were divided into 4 groups: Control (Con), TNF-α alone (TNFα), Tubastatin A alone (TubA), and TNF-α+Tubastatin A (TNFα+TubA). Representative blots and densitometry analysis of cleaved-caspase-3 in HPAECs (A) and HLMVECs (B). *P < 0.05 versus TNF-α group, n = 3. 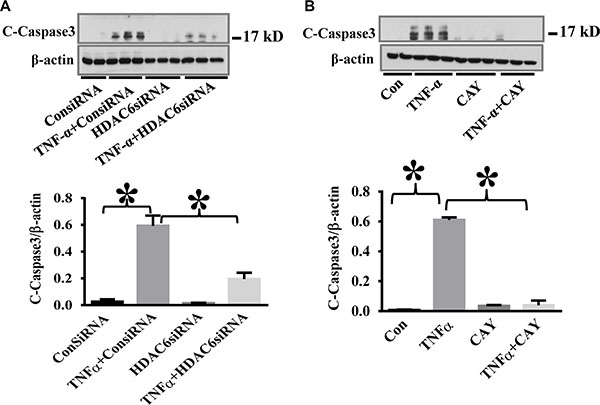 Figure 3: HDAC6 inhibition prevents TNF-α-induced ZO-1 disassembly in endothelial cells. HPAECs and HLMVECs were pre-treated with Tubastatin A (TubA, 3 μM) for 6 h, then challenged with TNF-α (20 ng/ml) for 18 h. Cells were divided into 4 groups: Control (Con), TNF-α alone (TNFα), Tubastatin A alone (TubA), and TNF-α+Tubastatin A (TNFα+TubA). Immunofluorescence staining of ZO-1 in HPAECs (A) and HLMVECs (B). Images are representatives of three to six independent experiments.

To assess the therapeutic potential of HDAC6 inhibition against endothelial cell injury during acute inflammation, we examined the effects of CAY10603 on caspase-3 activation in a mouse model of endotoxemia. In our studies, endotoxin-induced caspase-3 activation in the lung tissues was significantly inhibited by CAY10603 and Tubastatin A pre-treatment. (Figure 4). Furthermore, endotoxin challenge caused down-regulation of adherens junction protein VE-Cadherin in the lung tissues. The down-regulation of VE-Cadherin was also blocked by CAY10603 and Tubastatin A pre-treatment (Figure 5). 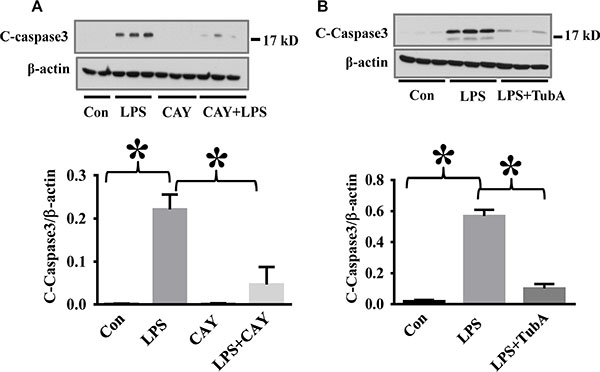 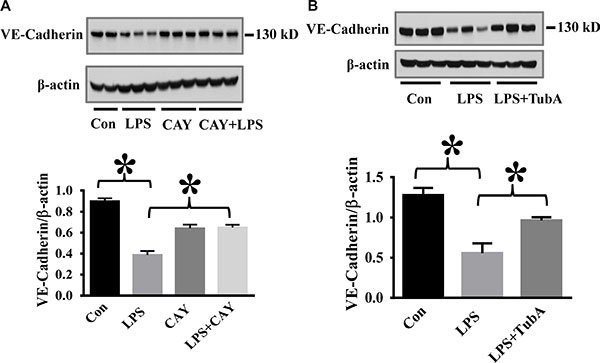 Caspase activation mediates apoptosis and re-distribution of proteins that are known to modulate endothelial barrier function including ZO-1 and VE-Cadherin [2–4]. Protein acetylation can modulate caspase activation [2]. In our studies, HDAC6 inhibition by HDAC6 inhibitors or siRNA knockdown resulted in reduced caspase 3 activation. It has been reported that microtubule disruption leads to increased apoptotic signaling and caspase activation [34, 35]. α-tubulin is a endogenous substrate of HDAC6 [10, 11, 36–38]. Acetylation of α-tubulin at Lys40 stabilizes microtubule structures [12, 38–41]. The decreased caspase 3 activation by HDAC6 inhibition could be due to its protection against microtubule disassembly by α-tubulin acetylation. HDAC6 has been reported to modulate the function of chaperones such as Hsp90 [17]. Inhibition of HDAC6 down-regulates Hsp90-dependent RhoA activity and signaling, which then suppresses actin cytoskeleton re-organization and cell contraction [17]. HDAC6 has also been reported to modulate the function of Survivin, an anti-apoptotic protein [42]. Survivin inhibits apoptotic signaling by inactivating caspases [42]. Our data suggest that inhibition of caspase-3 activation by HDAC6 inhibition provides potent protection against TNF-α-induced endothelial cell dysfunction.

We also showed that HDAC6 inhibition effectively suppress caspase-3 activation and maintain lung endothelial barrier integrity in vivo. HDAC6 inhibitors prevented caspase 3 activation in lung tissues with reduced lung edema in a mouse model of endotoxemia. Maintaining VE-Cadherin expression is critical in supporting lung vascular barrier integrity [43]. We demonstrated that Tubastatin A and CAY10603 were able to prevent the reduction of VE-Cadherin in lung tissues after LPS challenge. Our results suggest that HDAC6 inhibition is a new approach that can modulate endothelial cell junction stability in inflammatory lung injury. More studies are needed in the future to further investigate this new pathway.

Human pulmonary arterial endothelial cells (HPAECs) and human lung microvascular endothelial cells (HLMVECs) were purchased from Lonza (Allendale, NJ). Cells were grown in EGM-2 supplemented with fetal bovine serum (FBS) and cultured in an incubator at 37°C in 5% CO2 and 95% air. Cells from passages 5 to 9 were used in the experiments.

HDAC6 siRNA knockdown was conducted as described previously [41]. Cells were transfected with siRNAs for 48 h according to the manufacture’s protocol. siRNA-transfected cells were then stimulated with 20 ng/ml TNF-α for 24 h.

For immunofluorescence assay, cells were grown on glass coverslips pre-coated with 0.1% gelation. After the treatment, cells were fixed in –20°C methanol and washed with PBS on ice. Cells were blocked with 1% BSA in PBS, then incubated with primary antibody. After 3 washes with TBS, cells were incubated with Alexa Fluor 594 secondary antibody. The coverslips were mounted on the slides with DAPI. Immunoblotting assays of cell and lung tissue samples were conducted as described previously [43, 44].

Eleven to twelve week-old male C57BL/6 mice were purchased from Jackson Lab. All experiments and animal care procedures were approved by the Institutional Animal Care and Use Committee of the University of Kentucky. Endotoxemia was induced by I.P. injection of 7.5 mg/kg LPS in phosphate buffered saline (PBS). Mice were pre-treated by I.P. injection with Tubstatin A (9 mg/kg body weight) for 6 h or CAY10603 (5 mg/kg body weight) for 2 h before LPS challenge. Experiments were terminated 24 h after LPS challenge. Lung wet/dry weight ratio was assessed as described previously [43].

In Vitro Vascular Permeability Assay (96-Well) kit was used to measure endothelial cell monolayer permeability to FITC-dextran according to the manufacture’s protocol. Briefly, endothelial cells were seeded into the insert. 72 h later, endothelial cells formed a monolayer. Endothelial cell monolayers were pre-treated with CAY10603 (CAY, 0.1 μM) for 6 h, and then stimulated with TNF-α for 18 h. A high molecular weight (2000 kD) FITC-Dextran was diluted in EGM-2 medium (1:40) and added into the insert. 20 minutes after the incubation, 100 μl medium from lower chamber was collected. Fluorescence intensity was measured in a plate with a fluorescence plate reader.

Results are expressed as means ± SE of 3 to 6 independent experiments. ANOVA and post hoc multiple comparison tests were used for multiple groups. The Student′s t-test was used for comparisons of two groups. Statistical significance was assigned to P values < 0.05.

18. Chattopadhyay S, Fensterl V, Zhang Y, Veleeparambil M, Wetzel JL, Sen GC. Inhibition of viral pathogenesis and promotion of the septic shock response to bacterial infection by IRF-3 are regulated by the acetylation and phosphorylation of its coactivators. MBio. 2013; 4.