Incidence and origin of histologically confirmed liver metastases: an explorative case-study of 23,154 patients

3Foundation PALGA, Nationwide Network and Registry of Histo- and Cytopathology in the Netherlands, Utrecht, The Netherlands

Background: The liver is a common metastatic site for a large variety of primary tumors. For both patients with known and unknown primary tumors it is important to understand metastatic patterns to provide tailored therapies.

Objective: To perform a nationwide exploration of the origins of histological confirmed liver metastases.

Results: A total of 23,154 patients were identified. The majority of liver metastases were carcinomas (n=21,400; 92%) of which adenocarcinoma was the most frequent subtype (n=17,349; 75%). Most common primary tumors in patients with adenocarcinoma were from colorectal (n=8,004), pancreatic (n=1,755) or breast origin (n=1,415). In women of 50 years and younger, metastatic adenocarcinoma originated more frequently from breast cancer, while in women older than 70 years liver metastases originated more frequently from gastrointestinal tumors. Liver metastases in men older than 70 years originated often from squamous cell lung carcinoma. An unknown primary tumor was detected in 4,209 (18%) patients, although tumor type could be determined in 3,855 (92%) of them.

Methods: Data were collected using the nationwide network and registry of histo- and cytopathology in the Netherlands (PALGA). All histological confirmed liver metastases between January 2001 and December 2010 were evaluated for tumor type, origin of the primary tumor and were correlated with patient characteristics (age, gender).

Conclusion: The current study provides an overview of the origins of liver metastases in a series of 23,154 patients.

The high frequency of liver involvement in metastatic disease can be explained by the different hypotheses of metastatic spread. The double blood supply of the liver by the portal vein and the hepatic artery facilitates entrapment of circulating cancer cells, according to the “mechanical or hemodynamic hypothesis” [1], which explains the high incidence of liver metastases in patients with gastrointestinal carcinomas. However, some primary tumors selectively target the liver as a metastatic location, according to the “seed-and-soil” hypothesis [2]; examples are patients with uveal melanoma with a loss of chromosome 3 [3] , and patients with breast cancer with the human growth factor receptor 2 (HER-2) positivity in combination with estrogen (ER) and progesterone receptor (PR) positivity [4].

Large scale autopsy studies could potentially provide information, but these studies are rare, and often based on much older cohorts [6, 7]. An example is the study of DiSibio et al. which describes a cohort of autopsies between 1914 and 1943 [6]. Since 1943 changes in both surgical treatment and adjuvant therapy are profound and likely to have influenced detection and development of liver metastases. To date, it remains unclear which primary tumors, other than colorectal cancer, metastasize to the liver and in which frequency they do so.

By analyzing all liver biopsies in an era of modern diagnostics and treatments, the incidences of liver metastases can be estimated for different primary tumors. This large scale, systematic, nationwide analysis of pathology reports generated between 2001 and 2010 showed new insights into the origins of liver metastases.

Tumor types and organs of origin 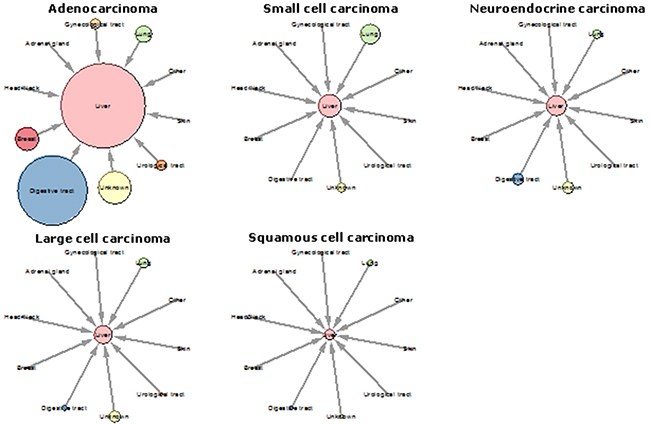 Liver metastases of the small cell subtype were most often of pulmonary origin (n=1043; 76.9%). Primary tumor location was not specified in 268 patients (19.7%). (Supplementary Table S2).

Figure 2: Differences in gender between tumor types A. and the most important carcinoma subtypes B. #: no significant difference between women and men. 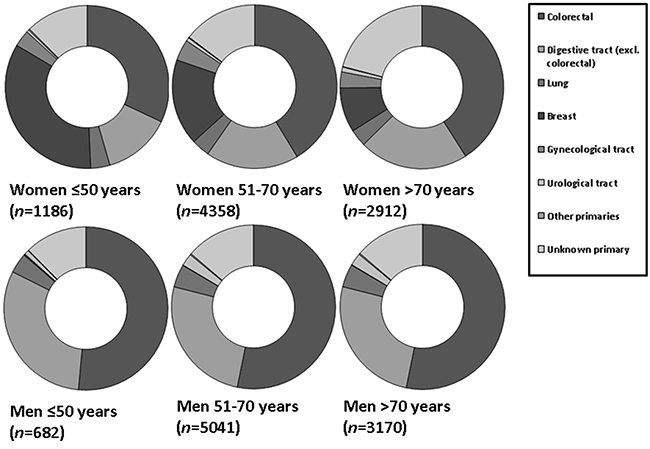 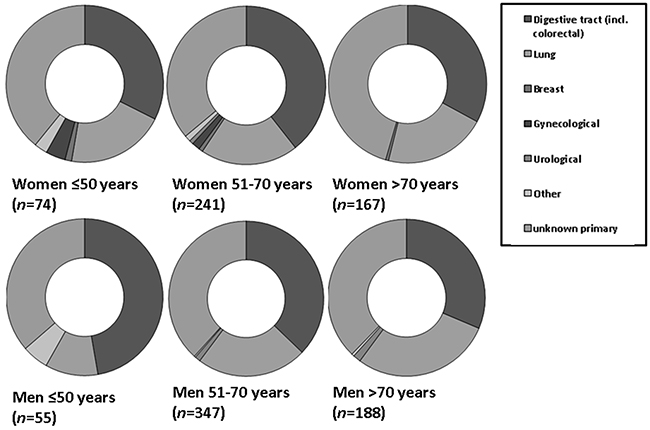 Figure 3B: Relative incidences of primary tumor locations in women and men with metastatic neuroendocrine tumor. In young women (≤50 years), the primary tumor was significantly more often located in the gynecological tract (p=0.034). 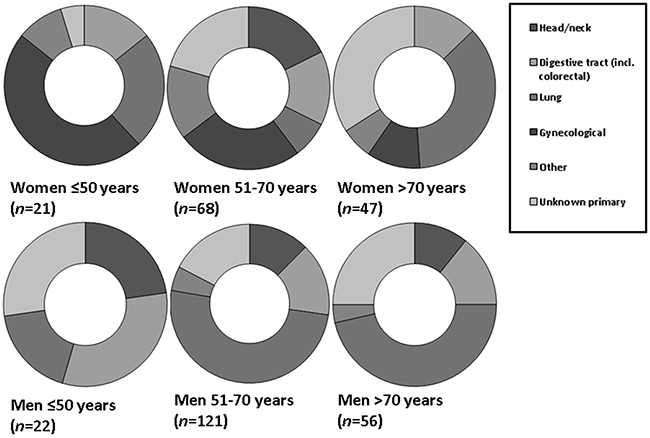 Median age of patients with an unknown primary tumor was 68 years (range 0-96 years).

To the authors’ knowledge, this is the first population-based study that describes the origins of histological confirmed liver metastases in a systematic way, including more than 23,000 patients during a 10-year time frame. The current study provides modern data on the origin and incidence of histological confirmed liver metastases from both biopsies and resection specimens in an era in which patients are treated according to modern standards.

Older cohort studies may represent a close approximation for the progression of untreated malignancies in humans [6], but it is of no doubt that in time metastatic patterns of various malignancies have changed. In the autopsy study by DiSibio et al. the primary tumors that spread most frequently to the liver included testicular cancer and breast cancer [6]. In that cohort testicular cancer spread to the liver in 75% of the patients, while in the present study the amount of liver metastases from testicular cancer was almost negligible, partly due to the fact that these tumors are currently diagnosed with markers in blood or by using imaging techniques [6]. Moreover, with the current treatment of resection and systemic therapy, the prognosis of testicular cancer improved tremendously and as a result, histological confirmed liver metastases are diagnosed less frequently nowadays [8, 9].

The clinical value of the present data might be questioned, but they can be used in the process of clinical decision making. In patients with multiple primary tumors and liver metastases, an approximation of the relative frequency of liver metastases can be derived from the current study. This could guide additional diagnostic (e.g.biopsy, immohistochemistry) or treatment strategies (e.g. surgery, systemic therapy).

The current overview can also be used for clinical decision making in patients with cancer of an unknown primary tumor (CUP). CUP is defined as a presentation of histologically confirmed metastases, where, despite a standardized diagnostic approach, no primary tumor can be detected [19]. In 24%-50% of the patients with CUP liver metastases are found [20–22]. Understanding the pathophysiological and molecular biology is needed to improve selective treatment strategies, based on the primary tumor and in the end to improve survival in patients with CUP. The current large dataset might be a basis for further research in this group of patients.

Despite the size of this large, nation-wide population based study, selection bias should not be underestimated. Obviously, not all patients with liver metastases will undergo liver biopsy. Especially in case of colorectal cancer liver metastases, the start of systemic treatment is often based on radiological diagnosis (CT-scan or FDG-PET scan) rather than on histological confirmation. Furthermore, although the liver is usually an easy access for biopsy, it is possible that histological or cytological confirmation was obtained from other metastatic sites such as: lymph nodes, ascites, pleural fluid, pulmonary lesions or any other metastatic location. Since these data and treatment, other than surgery, were not available in the current study, data on survival were not reported. On the other hand, many studies describe excellent results in patients diagnosed with liver metastases who underwent liver resection. This is not only the case in patients with colorectal cancer liver metastases, but improved survival has been reported in patients with other primary tumors, such as: breast cancer, melanoma, GIST or renal cell carcinoma [23–26].

In conclusion, this study provides an overview of the origins of liver metastases, with regard to tumor type, age and gender, in an era of modern diagnostic and treatment modalities. These important data form a basis for future research, and can be used for the development of diagnostic strategies.

Data were collected using a search question with keywords in the PALGA-database; the nation-wide network and registry of histo-and cytopathology in the Netherlands. This network registers all pathology reports since 1971, with a nation-wide coverage since 1991 [27]. With the key words; “liver metastases”, “histology”, and limited to the years “2001-2010”, all pathology reports describing liver metastases were identified.

Pathology reports were excluded when patients underwent a liver resection or liver biopsy for a benign liver condition or for a primary malignant liver tumor such as hepatocellular carcinoma.

Per patient the following characteristics were collected from the pathology report: age and gender, the year of first histological diagnosis (in case of multiple biopsies, or a biopsy prior to liver resection), tumor type and subtype, and the location of the primary tumor.

For age three categories were used: 50 years and younger; between 51 and 70 years; and over 71 years. The patient’s age at the first time of histological diagnosis was used in the analysis.

Tumor type and subtype were defined according to the International Classification of Disease (ICD-10). When the origin of the primary tumor was not described in the conclusion of the pathology report, additional reports of that patient were collected and evaluated to identify the primary tumor. When, after this assessment, no primary tumor could be detected, the primary tumor was classified as an “unknown primary”. Anonymous data were used and both the privacy committee and scientific committee of PALGA approved the study design.

The chi-square test was used to compare nominal variables and the Mann-Whitney U test was used to compare continuous variables. A p-value of less than 0.05 was considered to be statistically significant. Multivariate regression analyses were used to determine differences in primary tumor locations between men and women in the age categories. All descriptive and statistical analyses were performed using statistical package for social sciences (SPSS, INC., Chicago, Illinois, USA version 18.0). Cytoscape version 3.2.1. was used to perform clock plots to visualize the origins of liver metastases of the carcinoma type. Circle size is the square root of the total number of liver metastases.

16. Ito Y and Miyauchi A. Prognostic factors and therapeutic strategies for differentiated carcinomas of the thyroid. Endocr J. 2009; 56:177-192.