Ewing’s sarcoma is a rare and aggressive malignancy. In the present study, tumor from a patient with a Ewing’s sarcoma with cyclin-dependent kinase inhibitor 2A/B (CDKN2A/B) loss and FUS-ERG fusion was implanted in the right chest wall of nude mice to establish a patient-derived orthotopic xenograft (PDOX) model. The aim of the present study was to determine efficacy of cyclin-dependent kinase 4/6 (CDK4/6) and insulin-like growth factor-1 receptor (IGF-1R) inhibitors on the Ewing’s sarcoma PDOX. The PDOX models were randomized into the following groups when tumor volume reached 50 mm3: G1, untreated control; G2, doxorubicin (DOX) (intraperitoneal (i.p.) injection, weekly, for 2 weeks); G3, CDK4/6 inhibitor (palbociclib, PD0332991, per oral (p.o.), daily, for 14 days); G4, IGF-1R inhibitor (linsitinib, OSI-906, p.o., daily, for 14 days). Tumor growth was significantly suppressed both in G3 (palbociclib) and in G4 (linsitinib) compared to G1 (untreated control) at all measured time points. In contrast, DOX did not inhibit tumor growth at any time point, which is consistent with the failure of DOX to control tumor growth in the patient. The results of the present study demonstrate the power of the PDOX model to identify effective targeted molecular therapy of a recalcitrant DOX-resistant Ewing’s sarcoma with specific genetic alterations. The results of this study suggest the potential of PDOX models for individually-tailored, effective targeted therapy for recalcitrant cancer.

Sarcomas are a heterogeneous group of connective tissue malignancies of mesenchymal origin. They comprise approximately 1 percent of adult and 15 percent of pediatric malignancies. The most frequent site of primary sarcoma is the extremity, followed by the retroperitoneum and trunk. The most common site of metastasis is the lung. However, sarcoma can metastasize to almost any location or organ. There are over 50 known histological sub-types of sarcoma. Ewing’s sarcoma is a rare malignancy in which EWS-FLI1 is considered to be the causal translocation for 90% of cases [1]. Treatment for Ewing’s sarcoma uses surgery, radiation, and chemotherapy but with poor outcome. Novel more effective treatment is necessary for this recalcitrant disease [2–7].

Linsitinib (OSI-906) is a kinase inhibitor of both insulin receptor (IR) and insulin growth factor receptors (IGF-1R) [12]. Linsitinib was previously used to treat osteosarcoma cells and Ewing’s sarcoma cells [13]. Linsitinib is being tested in a Phase III trial in adrenocortical carcinoma and in a Phase I/II clinical trial in ovarian cancer [14].

Clinically-relevant mouse models of sarcomas would permit evaluation of targeted molecular individualized therapy based on the genetic alternations of the patient’s tumor. Our laboratory pioneered the patient-derived orthotopic xenograft (PDOX) nude mouse model with the technique of surgical orthotopic implantation (SOI). Our laboratory has developed PDOX models of all major tumor types including pancreatic [15–19], breast [20], ovarian [21], lung [22], cervical [23], colon [24–26] and stomach cancer [27] as well as mesothelioma [28] and sarcoma [6 29–31].

Recently, a patient tumor with high-grade undifferentiated pleomorphic soft-tissue sarcoma from a striated muscle was grown orthotopically in the right biceps femoris muscle of nude mice to establish a PDOX model. Tumor-targeting S. typhimurium A1-R followed by DOX eradicated the PDOX tumor in our laboratory [6].

A PDOX nude mouse model of follicular dendritic-cell sarcoma (FDCS) was also established in the biceps muscle of nude mice in our laboratory. The FDCS PDOX was resistant to both doxorubicin (DOX), as well as to NVP-BEZ235, dactolisib (BEZ), an experimental agent which is a dual pan-phosphoinositide 3-kinase-mammalian target of rapamycin inhibitor. However, in contrast to DOX and BEZ, the FDCS PDOX was sensitive to tumor-targeting Salmonella typhimurium A1-R [31].

In the present study, a Ewing’s sarcoma patient with both FUS-ERG fusion [1, 32] and CDKN2A/B loss was studied. No patient with both these genetic alterations has been previously reported. Therefore, CDK4/6- and IGF-1R-inhibitors (Figure 1) were tested on this patient’s tumor in the PDOX model (Figure 2). 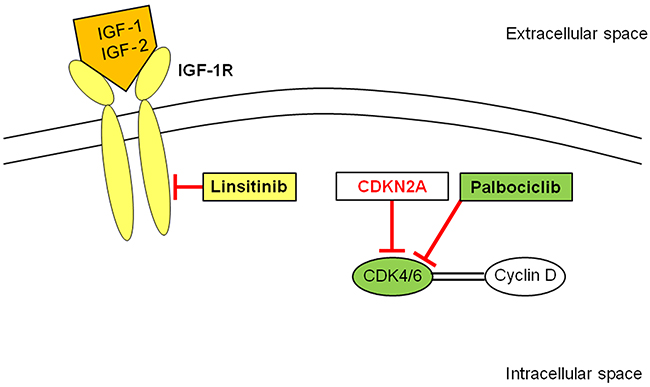 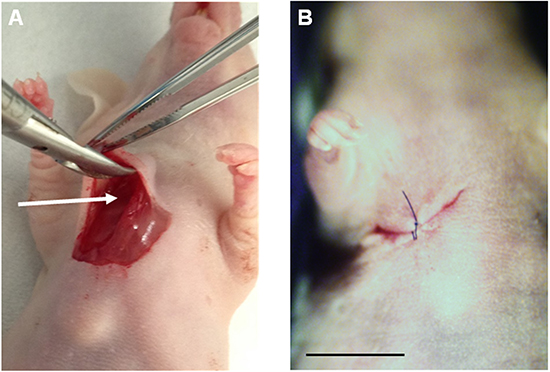 Figure 2: Establishment of Ewing’s sarcoma PDOX model. A. After making a skin incision on the right chest wall of a nude mouse, the space between the pectoral muscle and intercostal muscle (arrow) was expanded. A 4 mm3 fragment of the patient tumor was implanted orthotopically into the space. B. The pectoral muscle and the skin were closed with a 6-0 nylon suture. Scale bar: 10 mm.

Genetic alterations in the patient’s tumor

Comparison of histology of original patient tumor and PDOX model 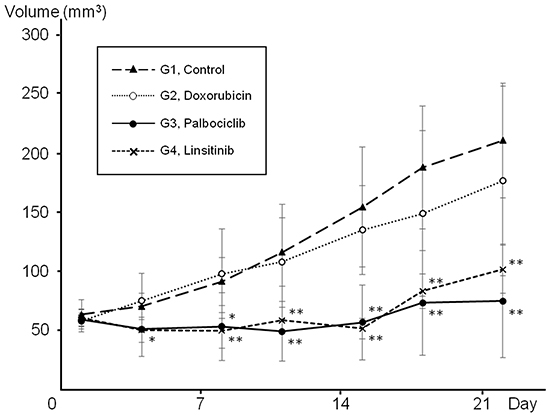 The findings of CDKN2A/B loss offered a clue that this tumor may be succeptible to CDK4/6 inhibition, which is normally inhibited by CDKN2A/B and suggests that the cell cycle is a viable target in Ewing’s sarcoma [34, 35].

Currently there are no therapies that have been developed that reliably inhibit ERG fusion proteins. This rare FUS-ERG transgene has also been noted in ALL and AML and found to modulate the retinoic acid pathway in AML [38]. In addition, Cironi et. al. [39] demonstrated that this fusion gene upregulated IGF-1 in AML indicating that this may be a candidate target for diseases with the FUS-ERG transgenes. Other studies in leukemia point to a possible role for PIM1 and MAPK inhibitors for malignancies with ERG transgenes [40]. The IGF-1R pathway promotes proliferation and prevents apoptosis of cancer cells through activation of phosphatidylinositol 3-kinase (PI3K) and mitogen-activated protein kinase (MAPK) pathways [41]. Consistent expression of IGF-1R was observed both in Ewing’s sarcoma cell lines and patient tissue [42, 43]. In a Phase II study for patients with Ewing’s sarcoma, measurable treatment response to an IGF-1R inhibitor was demonstrated [42]. In the present study, the IGF-R inhibitor linsitinib essentially arrested the Ewing’s sarcoma (Figure 4), suggesting further study and use of this inhibitor in sarcoma.

We report here significant efficacy of CDK4/6 and IGF-1R inhibitors on a rare Ewing’s sarcoma with FUS-ERG fusion and CDKN2A/B loss in a PDOX model. The results can be used to tailor further treatment for this patient.

Until 2003, all of the reported Ewing tumors involved rearrangement of the EWS gene, at 22q12, with an ETS-family transcription factor. In 2003, four Ewing’s tumor cases were reported that had joined chromosome bands 16p11 and 21q22. Detailed genetic analysis of two of the cases demonstrated how this rearrangement resulted in the fusion of the FUS gene at 16p11 to the ERG gene at 21q22 [32].

The four Ewing’s tumor cases previously described and the present case may represent a novel type of Ewing’s tumor in which 22q12 is not rearranged, and the primary translocation involves chromosomes 16 and 21 [32].

Cironi et al [39] observed in transfection studies that FUS/ERG activated the IGF-1 promoter and induced IGF-1 expression. This is consistent with the results of the present study that targeting the IGF-IR inhibited the Ewing sarcoma PDOX with the FUS/ERG fusion.

Palbociclib, a small-molecule inhibitor of cyclin-dependent kinases 4 and 6 [8–10], was recently approved by the FDA for HER2-negative breast cancer. CDKN2A (p16) is a negative regulator of CDK 4 and 6. Previously a patient with metastatic estrogen receptor- positive, HER2-negative breast cancer with CDKN2A loss responded to palbociclib, as briefly described above, which is consistent with the results of the present study, where palbociclib inhibited the Ewing’s sarcoma PDOX, which lost CDKN2A, by targeting CDK4/6 [33].

In a previous study from our laboratory, fluorophore-conjugated IGF-1R antibodies selectively visualized metastatic colon cancer [44]. Future studies will use the IGF-IR antibodies to detect metastasis in PDOX models of Ewing’s sarcoma to enable determination of efficacy of molecular inhibitors on metastasis as well as the primary tumor.

Previously developed concepts and strategies of highly selective tumor targeting can take advantage of molecular targeting of tumors, including tissue-selective therapy which focuses on unique differences between normal and tumor tissues [45–50].

Athymic nu/nu female nude mice (AntiCancer Inc., San Diego, CA), 4–6 weeks old, were used in this study. All animal studies were conducted with an AntiCancer Institutional Animal Care and Use Committee (IACUC)-protocol specifically approved for this study and in accordance with the principals and procedures outlined in the National Institutes of Health Guide for the Care and Use of Animals under Assurance Number A3873-1. In order to minimize any suffering of the animals the use of anesthesia and analgesics were used for all surgical experiments. Animals were anesthetized by subcutaneous injection of a 0.02 ml solution of 20 mg/kg ketamine, 15.2 mg/kg xylazine, and 0.48 mg/kg acepromazine maleate. The response of animals during surgery was monitored to ensure adequate depth of anesthesia. The animals were observed on a daily basis and humanely sacrificed by CO2 inhalation when they met the following humane endpoint criteria: severe tumor burden (more than 20 mm in diameter), prostration, significant body weight loss, difficulty breathing, rotational motion and body temperature drop. Animals were housed in a barrier facility on a high efficiency particulate arrestance (HEPA)-filtered rack under standard conditions of 12-hour light/dark cycles. The animals were fed an autoclaved laboratory rodent diet.

The Ewing’s sarcoma tumor from the right chest wall of a female patient was resected by JY in the Department of Surgery, University of California, Los Angeles (UCLA). Written informed consent was provided by the patient, and the Institutional Review Board (IRB) of UCLA approved this experiment. Neoadjuvant chemotherapy with DOX, vincristine, and cyclophosphamide, was previously administered to the patient.

A fresh tumor tissue sample from the Ewing’s sarcoma from the right chest wall was obtained and transported immediately to the laboratory of AntiCancer on ice. The sample was minced into 5 mm fragments. The tumor fragments were implanted subcutaneously in nude mice. Seven weeks later, the implanted tumors grew to approximately 10 mm in diameter. The established tumors were harvested and minced into 4 mm3 fragments. Mice were anethesized with the ketamine mixture. A 10 mm skin incision was made on the right chest wall. The PDOX model was established by implanting a single tumor fragment orthotopically into the layer between the pectoral muscle and intercostal muscle in the right chest wall of the nude mouse. The wound was closed with a 6-0 nylon suture (Ethilon, Ethicon, Inc., NJ) (Figure 2).

Treatment study design in the PDOX model of sarcoma

Fresh tumor samples were ﬁxed in 10% formalin and embedded in parafﬁn before sectioning and staining. Tissue sections (5 μm) were deparafﬁnized in xylene and rehydrated in an ethanol series. Hematoxylin and eosin (H&E) staining was performed according to standard protocol. Histological examination was performed with a BHS system microscope (Olympus Corp., Tokyo, Japan). Images were acquired with INFINITY ANALYZE software (Lumenera Corporation, Ottawa, Canada) [6, 31].