The retrieved lymph node (LN) count has been validated as a prognostic factor in various cancers. However, the interaction between LN counts and patients’ prognosis in gastric cancer with negative-LN metastasis is not fully studied. Surveillance, Epidemiology, and End Results Program (SEER)-registered gastric cancer patients were used for analysis in this study. Patients operated on for gastric cancer at N0 stage between 2004 and 2012 were identified from the SEER database. The association between the LN counts and survival was assessed using the Cox proportional hazards model. Patients were stratified into 1−4, 5−13, and > 13 subgroups according to LN count cut-off values determined by X-tile program, with the 5-year cause specific survival (CSS) rate of 64.8%, 72.5%, and 79.4%, respectively. LN count was also validated as an independently prognostic factor in multivariate Cox analysis (P < 0.001). In addition, nomograms including LN counts on CSS were established according to all significant factors, and the c-index was 0.703 (95% CI: 0.672−0.734). Further study indicated that patients with no LN metastasis had a decreased risk of death for each patient with LN examined up to approximately 14 LNs. Collectively, our study firmly demonstrated that the number of the retrieved LNs count was an independent prognostic factor for gastric cancer with no LN metastasis. The higher the LN count, the better the survival would be; the best CSS was observed on the LN count more than 14.

Although the incidence of gastric cancer has been substantially declining for several decades, it remains a major cause of cancer mortality because of its poor prognosis [1]. Complete resection remains the only treatment that can lead to cure for gastric cancer and the presence or absence of lymph node (LN) metastasis was widely considered to be the most important predictor for gastric cancer survival, and LN-negative patients have been shown to have better survival than those with LN metastasis [2, 3]. However, patients with node-negative gastric cancer also experience recurrences and may have fatal outcomes [2, 4, 5]. For such reasons, many researchers make efforts to investigate the prognostic factors related to recurrence and survival.

The tumor-node-metastasis (TNM) classification of the Union for International Cancer Control (UICC) for gastric cancer is considered as the best classification system because of its ability to provide precise prognostic estimation and guidance for patients through appropriate therapeutic programs. Currently, the 7th edition TNM classification is most widely used for the staging of gastric cancer, but it does not define the minimum number of retrieved LNs necessary, especially for the gastric cancer patients with no LNs metastasis. Some previously published articles sought to investigate the prognostic value of LNs retrieval in node-negative gastric cancer, but the number of patients included in their study was small [6, 7], and the cutoff used in the study may also be arbitrary.

The objective of this study was to investigate prognosis value of retrieved LNs count and other clinical pathologic characteristics in patients who had no LNs metastasis, and to find a reasonable retrieved LNs cutoff value that guarantee accurate TNM stage. In order to get convincing results in a larger series patients, we using SEER (Surveillance, Epidemiology and End Results)-registered database to analyze and X-tile program [8] to determine the optimal cutoff.

Figure 1: X-tile analysis of survival data from the SEER registry. X-tile analysis was performed using data from SEER database. The sample of patients with gastric cancer was equally divided into training and validation sets. X-tile plots of the training sets are shown in the left panels, with plots of matched validation sets shown in the smaller inset. The optimal cut-point highlighted by the black circle in the left panels is shown on a histogram of the entire cohort (middle panels), and a Kaplan-Meier plot (right panels). P values were determined using the cutoff point defined in the training set and applying it to the validation set. Figure 1 shows the optimal cutoff points for the lymph node negative patients (number of 4 and 13, χ2 = 72.026, P < 0.001).

Impact of total number of LNs examined on risk of death

Table 2: Univariate and multivariate survival analyses for evaluating the influence of the number of LNs retrieved on CSS in node negative gastric cancer

The Cox model performance was composed of two components, discrimination and calibration. The ability of a model to separate subject outcomes is known as discrimination. Discrimination was quantified with the Harrell’s concordance index (C-index), which is similar with the area under the receiver operating characteristic (ROC) curve but appropriate for censored data. As shown in Table 2, the C-index of Cox model is 0.703 (95% CI: 0.672–0.734). Calibration was performed by comparing predicted probability of CSS versus actual CSS on the 5,794 patients. The calibration curves for the probabilities of 3- and 5-year CSS showed excellent agreement of the nomogram prediction with actual observation as demonstrated in Figure 2. 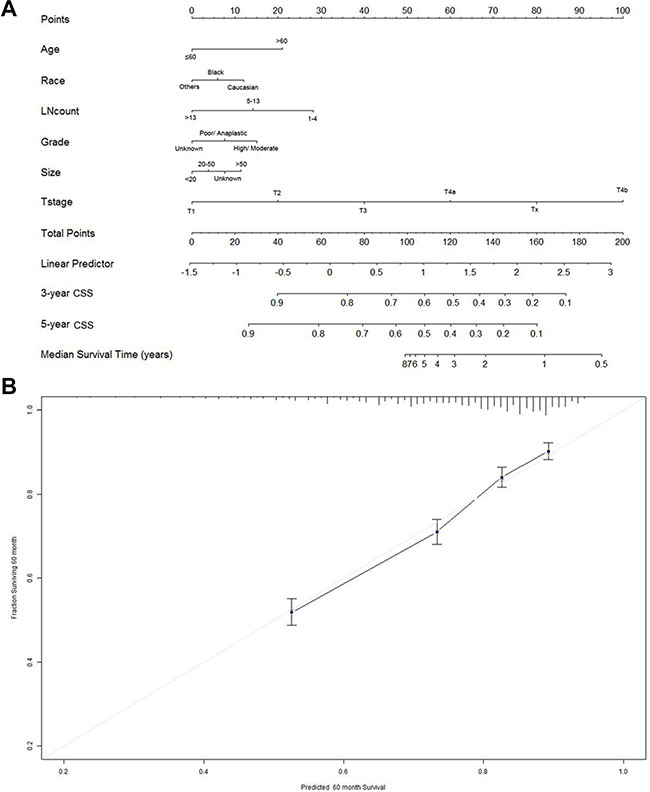 Figure 2: Nomogram for predicting 3- and 5-year cause specific survival (CSS) of gastric cancer patients. (A) Using nomograms with clinicopathological characteristics are shown. Instructions for use of the nomogram: First, assign the points of each characteristic of the patient by drawing a vertical line from that variable to the points scale. Then, sum all the points and draw a vertical line from the total points scale to the 3- and 5-year CSS to obtain the probability of death. (B) The reference line is 45 degree and indicates perfect calibration.

To assess the influence of different cutoff points on gastric cancer CSS, we further analyzed the number of retrieved LN counts from 2 to 22. The 5-year CSS of patients with n (cutoff point) or more nodes and less than n nodes were calculated, respectively. The survival rate of patients with n or more nodes increased gradually when n ranged from 2 to 14. Patients with 14 or more LNs evaluated had a relative reduction of 16.9% for death from gastric cancer compared to those with two less LNs evaluated (79.4% versus 62.5%). After the number of 14, the survival rates were roughly equal (Table 3). It is likely that 14 is the minimum number of LNs that should be retrieved, above which the influence of negative LNs (NLNs) count on survival is minimal.

Table 3: Univariate analysis for the influence of different cutoffs on CSS in node-negative gastric cancer

Previously, several studies investigated the prognostic factors for node-negative gastric adenocarcinoma with R0 resection. In contrast to previous studies, we first used X-tile program to divided patients into high, middle, and low risk groups, and validated retrieved LNs count was an independent prognostic factor in node-negative gastric cancer. Then, in order to find minimum number of LNs that should be retrieved, we analyzed individual LN counts from 2 to 22 and found number of 14 met the criteria. After the number of 14, the 5-year CSS the survival rates were roughly equal. In addition, to the best of our knowledge, our study is the largest scaled one that assess lymph node count on prognosis in node-negative gastric cancer.

Compared with node-positive gastric cancer, node-negative tumors have less aggressive biological features and a more favorable prognosis [2, 6, 9]. However, patients with node-negative gastric cancer also experience recurrences [4, 10]. Identifying the risk factors associated with the recurrence of node-negative gastric cancer is important because these patients are assured to undergo radical resection and not have any microscopic regional metastases. LN retrieval is an independent risk factor for tumor recurrence and a poor prognostic factor in various cancer undergoing radical resection [11–14]. In the present study, we also found that the survival rates increased as the number of retrieved LN counts increased. There was 14.9% increase in 5-year CSS if ≥ 14 LN was retrieved compared with those with < 2 LN retrieved. Despite this correlation, the mechanism underlying the relationship between the number of LNs and survival has not been determined, although several hypotheses have been proposed.

The first hypothesis involves stage-migration. The isolated tumor cells and micrometastasis in negative LNs are considered as the key factors that could lead to the adverse effect on the overall survival of gastric cancer patients [15–17]. Harrison et al. demonstrated that patients with T3N0M0 gastric cancer who underwent extended lymphadenectomy had significantly more negative LNs than those who underwent limited lymphadenectomy, thereby indicating that extended lymphadenectomy can improve the overall survival of T3N0M0 patients. This result is potentially associated with the elimination of micrommetastasis in LNs [18]. Increased LNs retrieval will reduce the chance of understaging, and then improve survival.

The second hypothesis regards the function of LNs. It is considered that the immunity exerted by tumor-draining LNs is dual function for cancer cells, namely antitumor immunity and tolerance for cancer. Resection of regional LNs might reset the immunological balance, resulting in an improvement of patients’ prognosis. A higher number of LNs dissected may simply reflect a host lymphocytic reaction to the tumor, which is associated with LN count [19], and lymphocytic reaction to tumor cells has been associated with longer survival in colorectal cancer [20, 21].

The second hypothesis revolves around the notion that the surgeon is a technician [22]. In theory, an increasing number of examined LNs indicates a high quality of surgical care. Improved surgical techniques may be the result of improved intraoperative staging [23], and therefore reduce the chances of iatrogenic spread of cancer cells [22]. As such, there is less likelihood of leaving tumor cells behind, thus positively affecting survival. Serosal exposure was an important prognostic factor for node-negative advanced gastric cancer after radical resection [24–26]. The chance of iatrogenic spread of cancer cells may be high in those patients. High quality of surgery will significantly reduce such adverse effect.

We acknowledge that our study suffers from several shortcomings. First, we only assessed CSS as end point in this study, for there were no information about local recurrence and distance metastasis in SEER database. Second, the SEER database does not include information regarding the administration of chemotherapy and the quality of surgical care or pathological technique, and all of these factors may impact survival outcomes, and we cannot adjust these factors in survival analysis. Third, distant LN metastases always classified as distant metastases and therefore the surgery were regarded as palliative resection, and should be excluded from this study. But for SEER data lacks such information, we cannot adjust for this.

In conclusion, retrieved LNs count was associated with long-time survival outcomes in node-negative gastric cancer. Patients would have a decrease in the risk of death for each additional LN examined up to a total of 14. In light of the association of LNs retrieval with postoperative treatment and prognosis, efforts to improve quality of care in this area could produce substantial improvements in outcome.

Data was obtained from the current SEER database (Surveillance Research Program, National Cancer Institute SEER*Stat software [version 8.2.1], http://www.seer.cancer.gov/seerstat) maintained by the National Cancer Institute, which consists of 18 population-based cancer registries. Inclusion criteria included the following: (1) patients were diagnosed from 2004 to 2012; (2) the site code was limited to stomach; (3) histology code was limited to adenocarcinoma (8140/3, 8144/3, 8255/3, 8211/3, 8260/3,8263/3), mucinous adenocarcinoma (8480/3), and signet ring cell carcinoma (8490/3); (4) with no LN metastasis(N0) and distant metastasis(M0); (5) underwent surgical resection; (6) at least with one LN retrieval; (7) age > 18 years old; (8) gastric cancer was the only one primary or first of more than one primary; (9) information on CSS and survival months available.

The authors acknowledge the efforts of the Surveillance, Epidemiology, and End Results (SEER) Program tumor registries in the creation of the SEER database.

WFZ and RZL conceived of and designed the study. WFZ, TTJ and YL performed the analyses. TTJ and YL prepared all figures and tables. WFZ, TTJ, YL and RZL wrote the main manuscript. All authors reviewed the manuscript.