Purpose: Pelvic bone metastases are difficult to treat because of complex pelvic bone anatomy and the proximity of normal organs. The adequacy of radiation dose and field coverage was evaluated.

Results: The local control rate was 80.1% and the pain control rate was 68.5%. Compartmental target volume (CTV), encompassing the whole compartment of the involved bone, was found to be a significant factor (1-year LFFS, 78% vs. 50%; p=0.001). Sites of metastasis were categorized as either upper or lower pelvic bone; both categories showed improved local control with CTV. Metastatic lesions that received more than 50 Gy of EQD2 showed more partial response in pain after RT (58% vs. 79%; p=0.007). No patient showed toxicity higher than Grade IV.

The bone is a major site of extrahepatic metastasis from hepatocellular carcinoma (HCC). Patients with terminal Barcelona-Clinic Liver Cancer stage D HCC require full symptomatic palliation for local disease or distant metastasis.[1] Palliative radiotherapy (RT) effectively manages symptoms in HCC patients with bone metastases, with pain response rates of approximately 60-80%.[2–4] Pain, bone destruction causing mechanical instability, and pathological fractures are the most common manifestations of bone metastases. To date, several studies described clinical features and radiotherapeutic strategies in HCC patients with bone metastasis, and many studies have evaluated stereotactic body RT for spine metastasis.[5–8] Unlike vertebral metastases, few studies have evaluated HCC patients with pelvic bone metastasis. The pelvic skeleton supports the balance of the trunk and has a complex bone anatomy. Many organs such as the intestines, urinary bladder, and internal sex organs are located within or near the pelvis. With these considerations, RT planning for pelvic bone metastases is frequently challenging.

We analyzed the clinical outcomes including pain palliation and local control according to clinical features and radiotherapeutic parameters in HCC patients who received RT for pelvic bone metastases.

A total of 146 bone metastases from 89 patients were analyzed. Median patient age was 56 years (range, 36-79 years), and 70 patients (79%) were male. The most common viral background was hepatitis B virus (n=77; 86%), and 71 patients (80%) were classified as Child-Pugh class A. Sixty-five patients (72%) had a controlled primary tumor, while 24 (28%) had an uncontrolled primary tumor. An uncontrolled primary tumor was defined as the presence of viable tumors in the liver or HCC progression (Supplementary Table 1). Bone metastasis (n=146) characteristics are summarized in Table 1. Thirty-two patients had multiple pelvic bone metastases. We categorized the sacrum and ilium as upper pelvic bone, and the acetabulum, pubic bone, and ischium as lower pelvic bone. Of 110 cases with other bone metastasis, the most common site was the T-spine (n=83), followed by the L-spine (n=75), scapulae (n=8), C-spine (n=7), ribs (n=6), sternum (n=5), and skull (n=4). There were 59 out of 146 cases (40%) receiving sorafenib, and there were 24 out of 59 cases (41%) were treated RT and sorafenib simultaneously.

The median follow-up time was 9.7 months (range, 2.1-42.3 months). The local control rate (LCR) was 80.1%, the pain control rate was 68.5%, and the 1-year pain free interval (PFI) was 70%. The LCR and pain control rate according to bone metastasis characteristics are summarized in Table 2. There were more local failures and recurrences of pain in cases of pure osteolytic lesions than mixed metastasis (p=0.004 and 0.002, respectively). Cases of bone metastasis with soft tissue extension had more local failures (p= 0.025). 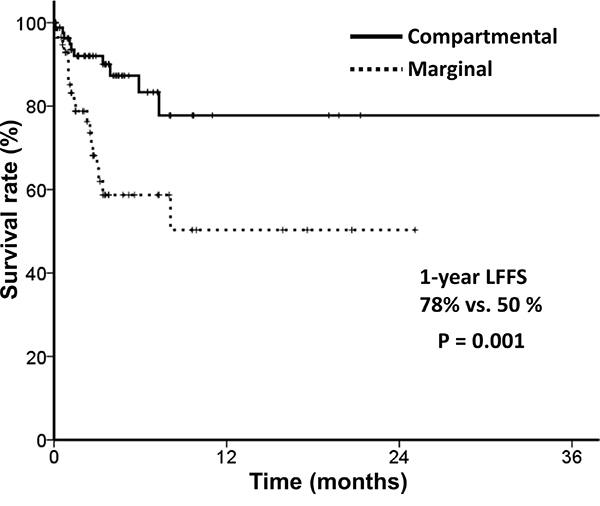 Effects of targeted agent (sorafenib) were analyzed. Adding systemic treatment had no effect on local control, pain control and survival.

Median OS was 3.8 months, and no difference in OS was detected between different CTVs (Figure 2). 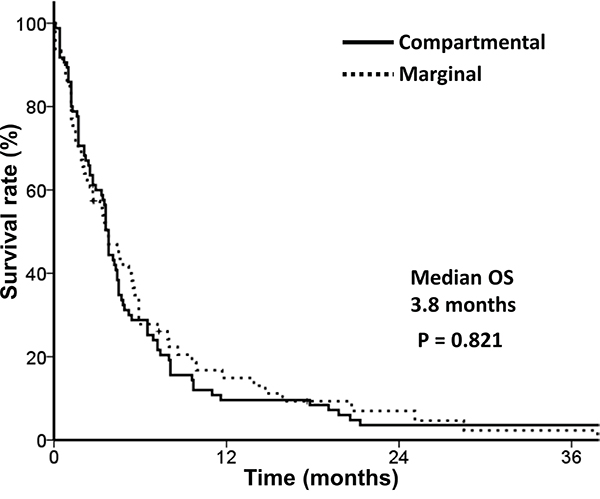 Acute RT-related toxicities are summarized in Table 5. Grade IV neutropenia and thrombocytopenia (n=4 and n=3, respectively) were observed with compartmental target volume treatment. No grade IV toxicities were observed with marginal target volume treatment. However, these were not statistically significant (p=0.087 for neutropenia and p=0.162 for thrombocytopenia, respectively).

The incidence and distribution of extrahepatic bone metastasis

He et al. reported that partial pain relief was achieved in 70.2% of patients (144 of 205 patients), complete pain relief was achieved in 29.3% (60 patients), and overall pain improved in as much as 99.5% of HCC patients.[5] There was no dose-response relationship for palliation of bone metastasis, but the retreatment rate was higher in patients with expansile soft tissue. In this study, 40% of HCC bone metastases showed hypervascular soft-tissue mass.[5] Concerning pelvic bone marrow, several studies have evaluated the dose-volume effects of pelvic bone marrow radiotherapy in rectal and cervical cancer patients. Mell et al. contoured pelvic bone marrow (BM) and evaluated dosimetric parameters associated with acute hematologic toxicity in cervical cancer patients undergoing concurrent chemotherapy and intensity-modulated pelvic radiotherapy.[13] Low pelvic bone marrow dose was associated with increased Grade II or worse leukopenia and neutropenia (p=0.006 and p=0.037, respectively). Mell et al. suggested that even low dose irradiation to the pelvic bone frequently induces hematologic toxicity and that the volume of irradiated pelvic bone marrow is important. Lee et al. also described the volume of red bone marrow as an independent risk factor associated with hematologic toxicity (p=0.014).[14] The present study evaluates pelvic bone radiotherapy for pelvic bone metastasis. Determining the target volume is very important in these patients because pelvic bone marrow volume is critical for hematologic toxicity.[14] P53 has been suggested to play a key role in determining how a cell responds to RT. Gomes et al. reported that irradiation induced a decrease in cell survival when P53 was overexpressed in vitro.[15] We were unable to analyze P53 expression owing to the retrospective nature of this study.

Grade IV neutropenia and thrombocytopenia (n = 4 and n = 3, respectively) were more frequently observed with compartmental target volume treatment than with marginal target volume. Therefore, we suggest that treatment volume should be decided according to bone marrow volume and other bone involvement. One case of isolated metastatic HCC arising from the pelvic bone has been described: a 73-year-old man presented with a large mass on the pelvic bone (13 × 10 cm). He was treated with radiotherapy and transarterial chemoembolization to the pelvic bone followed by chemotherapy, resulting in near complete tumor regression.[12]

Combination of sorafenib and radiation therapy

There is little information about the combined radiotherapy and sorafenib for bone metastases in patients with hepatocellular carcinoma. In our previous report, the feasibility of sorafenib combined with radiation therapy in 18 patients with hepatocellular carcinoma was evaluated.[16] The in-field response rate was 100% in the primary group and 60% in the measurable metastasis group. Toxicities of grade 3-4 related combined treatment were duodenal bleeding in 1 (6%) patient and elevation of aspartate transaminase in 1 (6%) patient. In recent phase II study, the tolerance and toxicities of conventionally fractionated radiation therapy (2-2.5 Gy per fraction; dose range 40-60 Gy) with sorafenib were evaluated.[17] Hepatic toxicities were major determinant of the combined treatment in this study as follows, six patients (15%) developed treatment-related hepatic toxicity grade ≥ 3, and 3 of them were fatal. Brade et al. reported the phase I study of the combination of sorafenib with stereotactic body radiation therapy for hepatocellular carcinoma.[18] In this study, clinical dose-limiting toxicities (grade 3 large bowel bleeding and grade 4 bowel obstruction) were noted dependent on the irradiated volume and dose of sorafenib. Therefore, the combination should be used with caution and recommended with a clinical trial.

Metastatic lesions are typically osteolytic, although sclerotic lesions can be encountered from primary tumors such as prostate or breast carcinoma.[19] He et al. reported that purely osteolytic lesions were present in 2.4% of 205 HCC patients with bone metastasis.[5] Most lesions (97.6%) had a combination of both osteolytic and osteoblastic components. For pelvic bone HCC metastases in the present study, only 7.1% were pure osteolytic lesions, and 28.1% had soft tissue extension. Although the number of pure osteolytic lesions was small (n = 10), local control and pain control were quite poor (29% and 14%, respectively) when such lesions were treated with marginal target volume. Therefore, we propose that compartmental treatment should be considered in these patients.

For target volume delineation, some guidelines and clinical recommendations exist for spine metastases in metastatic breast cancer patients. For example, CTV should include the complete vertebral body in cases of vertebral involvement.[20] Although the pelvis is a typical metastatic site, little consensus exists regarding target volume delineation for radiotherapy of pelvic bone metastases. Because the pelvis has a curved shape and encompasses bowel loops and the bladder, contouring the target volume and protecting the organs at risk is challenging. In the present study, target volume encompassing the gross tumor plus a wide margin encompassing pelvic bone marrow showed significantly improved local control as compared to clinical target volume plus the margin of the involved metastatic bone tumor (p=0.001), without significantly increasing toxicity.

Recent technological advances, such as intensity modulated radiotherapy and stereotactic body radiotherapy, have enabled more successful radiation treatment by delivering a substantial dose of radiation to the tumor and sparing healthy normal tissues.[21] Although many studies have evaluated clinical features and radiotherapeutic strategies in patients with spinal bone metastasis, few studies have been performed for HCC patients with pelvic bone metastasis. Although the present study is a retrospective analysis, the results of this study provide practical guidelines for radiation treatment for HCC patients with pelvic bone metastasis. Future clinical trials will focus on comparing treatment results using different target volumes, or different treatment strategies. 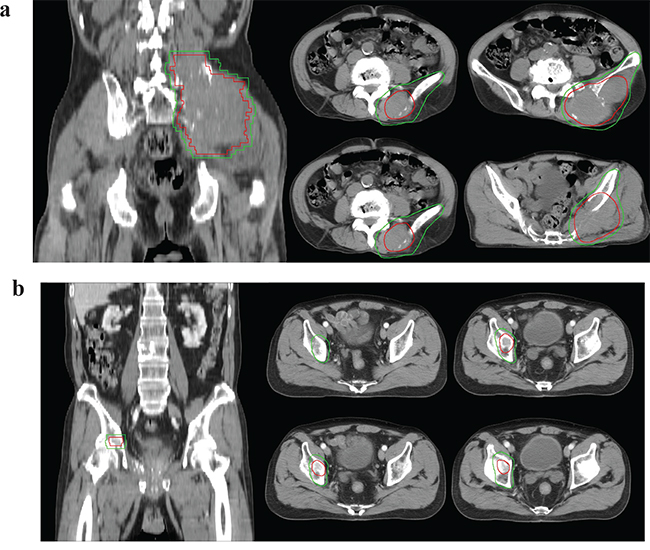 The pain response was assessed as a subjective pain response using the VAS. VAS is used to describe the intensity of pain or how much pain the patient reports feeling., The patient is asked to identify how much pain he or she is feeling on a numeric rating scale from 0 (no pain) to 10 (the worst pain that he or she can imagine). Patients were asked to report the level of pain before, immediately after, and 1 month after treatment. A positive response was defined as a ≥ 50% reduction in the VAS numerical pain rating. Responses were evaluated for a total of 1 month, beginning with the first day of treatment.

Treatment-related toxicities were assessed at every follow-up examination. Toxicity was monitored according to the Common Terminology Criteria for Adverse Events v3.0 (CTCAE v3.0), through a physical examination and laboratory testing for levels of hemoglobin, white blood cells, and platelets, both during RT treatment and after completion of the RT schedule.

This research was supported by Technology Commercialization Program through Innopolis Foundation of Korea funded by the Ministry of Science, ICT and Future Planning (ACC-2016-DDI-00793) and presented at the liver week 2015, September 10-12, 2015, Busan, Korea.