Methods: Randomized controlled trials (RCTs) were identified and the association between RAS mutation and clinical outcome in CRLM patients treated with anti-EGFR or anti-VEGFR MoAbs was investigated. Searches were performed for data recorded between January 2005 and August 2015 in the Cochrane Library, MEDLINE, PubMed, and EMBASE. Objective response rates (ORR), conversion resection rates (CRR), R0 resection rates (R0R) and rate ratios (RR) were used to assess the strength of the association between different RAS status, MoAbs and conversion efficiency.

Conclusion: We noted that the addition of MoAbs (anti-EGFR or anti-VEGFR) to standard chemotherapy could improve conversion efficiency for patients with potentially resectable CRLM patients, and anti-EGFR therapies maybe more effective than anti-VEGFR therapies. RAS status is a potential predictive marker of the clinical benefit resulting from treatment with anti-EGFR MoAbs therapy in CRLM patients and anti-EGFR MoAbs therapy could displayed greater efficiency only in patients with wild type RAS.

Colorectal cancer is the third most commonly diagnosed cancer in males and the second in females, with an estimated 1.4 million cases and 693,900 deaths globally per year [1]. At least 50% of patients develop metastases [2]. Fewer than 12.9% of patients with stage 4 colorectal cancer had a 5-year survival [3]. Only a few patients with liver-only metastatic disease had a 30-60% chance of survival 5 years after surgical resection [4]. This stark difference in 5-year survival highlighted the potential benefits of liver resection. However, the majority patients have unresectable tumors [5], and preoperative therapy may raise the hope of these patients. Preoperative therapy is administered in either of two settings: neoadjuvant therapy is administered preoperatively for initially CRLM, making the resection from Rx to R0 (Rx resection: presence of residual tumor cannot be assessed, R0 resection: macroscopically complete removal by non-contaminated surgery with wide or radical margin, R1 resection: microscopic residual tumor) [10], and conversion therapy is given to patients with initially unresectable disease in an attempt to render the patient’s disease resectable [12]. Systemic conversion therapy may include combinations of chemotherapeutic agents (irinotecan or oxaliplatin-based), with or without the use of targeted MoAbs targeting (anti-VEGFR: bevacizumab or anti-EGFR: cetuximab and panitumumab). The efficiency of the targeted therapy is associated with the gene status and the identification of the correlation between a mutated cancer gene and the response to a targeted therapy is complex. This may be due to intratumor heterogeneity [13]. Different RAS type tumors should be evaluated especially in patients administered anti-EGFR MoAbs. The efficiency of conversion therapy depends upon response rate and R0 resection, and a strong relationship between the tumor rate ratio (RR) and resection rates has been demonstrated in patients with CRLM treated with chemotherapy [12]. Although the conversion therapy could provide benefits for the patients with unresectable CRLM, the preferred choice of MoAbs for conversion therapy remains debatable, and there has been no randomized study specifically investigating patients with borderline resectable CRLM [7]. Therefore, the choice of standard chemotherapy to be administered, and whether or which type of MoAbs should be used in conversion therapy has yet to be elucidated by RCTs and need to be explored.

The intervention measures in the present meta-analysis involved a comparison of the three groups follows: anti-VEGFR MoAbs plus chemotherapy vs. anti-EGFR MoAbs plus chemotherapy vs. placebo (or blank control) plus chemotherapy prior to the surgical resection. Searches were performed for data recorded between January 2005 and August 2015 in the Cochrane Library, MEDLINE, PubMed, and EMBASE. The search terms were: “Conversion therapy”, “CRLM” and “MoAbs”. The inclusion criteria were histologically established unresectable CRLM by pathology or imaging; 0-2 points according to Eastern Cooperative Oncology Group (ECOG) score standard; no detectable extrahepatic tumors; and age of 18-80 years. The exclusion criteria were: non-randomized controlled trials; use of neoadjuvant therapy; and failure to comply with any of the above inclusion criteria.

Two reviewers (WL and SYN) reviewed independently to assess the eligibility of each study for inclusion. Any discrepancy in the selection of studies or data retrieved by the reviewers was resolved by discussion with a third reviewer. The quality of the included literatures was appraised and graded according to PRISMA Checklist and a modified Jadad scale [14] as follows: low quality, 1-3 points; and high quality 4-7 points. Others were excluded to reduce the influence of the critical analysis result for the RCTs with high statistical power and consistent reporting, with a score of 3 considered acceptable and a higher score indicating better reporting.

A total of 132 publications were retrieved. After reading the titles and abstracts, 51 reports of nonrandomized controlled studies and those that didn’t use targeted therapy or repeated researches were excluded. By reading the full texts of the remaining publications, 13 randomized control studies [15-27] were included in accordance with the aforementioned inclusion and exclusion criteria (Figure 1). Of the 13 studies, 10 were used to compare the use of targeted drugs plus chemotherapy with pure chemotherapy. Three reports were used to investigate the efficiency of anti-EGFR vs. anti-VEGFR therapy in the conversion therapy for potentially CRLM. Five reports were referenced for the comparison of anti-EGFR MoAbs in mutant or wild RAS status in Figure 1.

The 13 studies comprised 7,520 cases in total, with 3,756 cases were from treatment groups and 3,764 from control groups. The characteristics of the included data are displayed in Table 1. 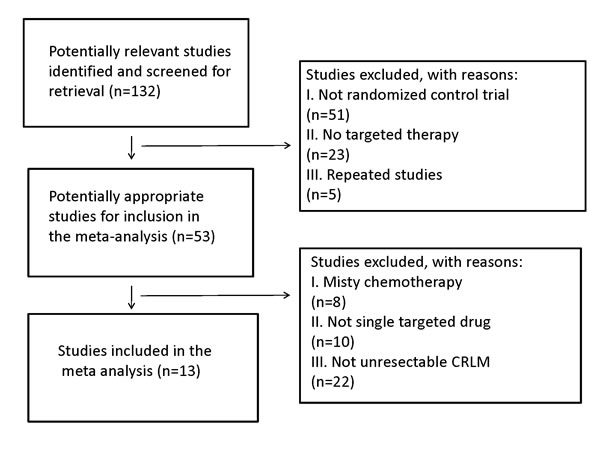 Figure 1: Search strategy and flow chart for the present meta-analysis.

Effect of targeted drugs vs. chemotherapy on ORR

Figure 2: Comparison of targeted drugs plus chemotherapy with chemotherapy for CRLM patients in terms of the objective response rate (ORR).

Effect of anti-EGFR vs. anti-VEGFR targeted chemotherapy on ORR

Figure 3: Comparison of anti-EGFR with anti-VEGFR targeted drug for CRLM patients with regard to the objective response rate (ORR). 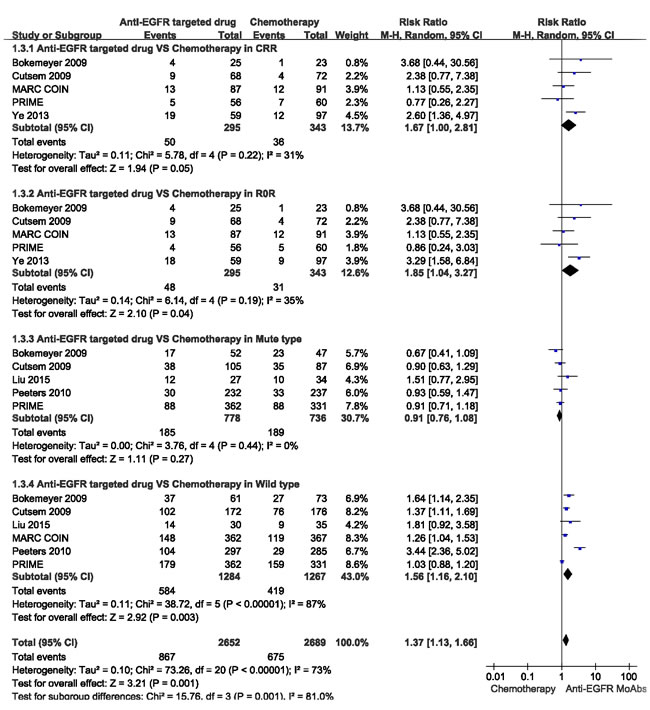 Every study was excluded each time to assess the effect of the individual data set to the pooled RRs, and studies with high heterogeneity were subsequently removed.

The primary aim of treatment for the CRLM is conversion to resectable as it provides the only possibility for cure [28]. A staging system was proposed by the European Colorectal Metastases Treatment Group system that divides the CRLM into 4 groups. These include M0: no metastases; M1a: resectable liver metastases; M1b: potentially resectable liver metastases; and M1c: liver metastases that are unlikely to ever be resectable. For M1a resectable patients and M1b patients who qualify as resectable after systemic treatment, resection offers the possibility of a cure. For the M1c group, the possibility of resection should not be excluded and each case should be considered individually [8]. In conversion therapy, common combined chemotherapy regimens include FOLFIRI [21], FOLFOX [22] and CAPOX [23]. However, the efficiency of such chemotherapy is only 30-40%, even in first line application. Also the addition of anti-VEGFR/EGFR agents could improve both OS and the rates of secondary resection [21-23]. The present study confirmed the conversion efficiency of different MoAbs plus chemotherapy in patients with wild or mutant type RAS. The study was also able to ascertain from data concerning the ORR, that conversion therapy with MoAbs(anti-EGFR or anti-VEGFR) was more efficacious than simple chemotherapy. When comparing the two types of MoAbs therapy, anti-EGFR elicited a better response. From the study, patients with wild type RAS could benefit from anti-EGFR conversion therapy. However, there was no observed benefit for patients with the mutant type RAS considering whether MoAbs were administered. The underlying mechanisms involve RAS proteins, which are GTPases and molecular switches for a variety of critical cellular activities involving K-RAS, N-RAS, and H-RAS in the EGFR signaling pathway. Their function is tightly monitored in normal cells but the oncogenic mutation of the RAS gene, which creates constitutively active RAS proteins, result in uncontrolled proliferation or survival in tumor cells and resistance to anti-EGFR drugs[29]. Therefore, the wild type RAS patients were included to evaluate the overall conversion resection and R0R following treatment with anti-EGFR MoAbs plus chemotherapy. Both R0 resection and overall resection rate indicated the advantages of anti-EGFR MoAbs in conversion therapy. Certain factors were not considered in the study design of the present meta-analysis. For patients with RAS and BRAF mutations, triplet chemotherapy and combinations with bevacizumab represented two rational alternatives on the basis of high response rates and tumor shrinkage [30]; however their efficacy in the conversion setting has yet to be confirmed in specifically designed studies. The gene type of RAS analysis in this study were included both RAS and K-RAS for the technology of detecting RAS was created in the recent years and a part of RCTs only described the K-RAS type. In addition, not all the studies selected presented the resection rate or R0 resection but only the ORR and unequivocal on ORR and resection rate in potentially resectable patients are still required in order for the heterogeneity to be amplified.

In clinical trials regarding adverse effects, it has been revealed that chemotherapy may induce liver damage; in particular oxaliplatin has been associated with sinusoidal wall disruption, resulting in sinusoidal obstruction (SOS) [32]. Similarly, irinotecan can induce a form of non-alcoholic fatty liver disease known as steatohepatitis [33].Therefore, in order to decrease these and improve the therapeutic efficiency for patients with colorectal cancer, molecularly targeted therapies have been developed [34], among which, the rates reported are 43-81% with the addition of the molecular targeted drug bevacizumab or cetuximab and panitumumab [35]. Molecular targeted drugs expand specific changes in tumor cells to achieve relative target specificity. This not only enhances the anti-cancer effect, but also reduces the damage to normal cells.

In conclusion, the present study demonstrates a clear incentive to select MoAbs for the treatment of potentially resectable CRLM patients with different RAS/K-RAS status. MoAbs proffer additional benefits in conversion therapy compared to the simple chemotherapy. Furthermore, patients excluded mutant type RAS/K-RAS could benefit from MoAbs for the conversion therapy and among the different MoAbs, anti-EGFR therapies have greater efficacy compared to anti-VEGFR, however, this is only the case for patients with wild type RAS/K-RAS.

This work was supported by Project of the National Natural Science Foundation of China (No. 81271492).