Long non-coding RNAs (lncRNAs) are defined as transcribed RNA molecules that are longer than 200 nucleotides and not translated into proteins [1]. Although their function was initially unclear, lncRNAs are now known to have critical roles in the regulation of gene expression through transcription, processing of small RNAs, and epigenetic modification as well as other regulatory functions [2, 3]. As key components in gene regulatory complexes, lncRNAs contribute to the activation or inhibition of expression of genes involved in diverse normal cellular processes, such as proliferation and apoptosis. Many of these same processes are corrupted in cancer, and thus deregulated lncRNA expression has been linked to development of the disease [3–6].

Increasing evidence indicates that one of these molecules, HOX transcript antisense intergenic RNA (HOTAIR), has an oncogenic role in the development of human cancer in diverse tissues [5, 7, 8]. HOTAIR is a 2158-nucleotide lncRNA transcribed from the antisense strand of the HOXC gene which is located on chromosome 12 [9]. HOTAIR represses transcription, but surprisingly, in trans at the HOXD gene cluster on chromosome 2 [8, 10]. The lncRNA has been proposed to function as a molecular scaffold for the assembly of polycomb repressive complex 2 (PRC2) and lysine specific demethylase 1/REST corepressor 1/RE1-silencing transcription factor (LSD1/CoREST/REST) complex at 5′ and 3′ domains, respectively. Histone H3K27 methylation and H3K4 demethylation activities are thus effectively localized [11], which ultimately results in efficient chromosome condensation and transcriptional repression of targeted genes [7].

Numerous studies have demonstrated that overexpression of HOTAIR occurs in many cancers. It is furthermore associated with poor prognosis, and in experimental models, it promotes tumor progression, invasion, and metastasis [12–16]. Finally, HOTAIR single nucleotide polymorphisms (SNPs) have been investigated as potential cancer susceptibility loci and linked to increased risk for human cancers, such as breast [17–19], esophageal squamous cell carcinoma [20], gastric [21–24], lung [25], and colorectal cancers [26]. However, the results remain controversial possibly due to the fact that independent studies are underpowered and biased, especially for small cohorts. Here, a meta-analysis of eligible studies conducted before January 20, 2016 was performed in order to obtain more precise and comprehensive insight into the impact of HOTAIR polymorphisms on cancer susceptibility. The results indicated that HOTAIR polymorphisms are associated with increased cancer risk, but mainly in stratified analysis based on ethnicity and cancer type.

Table 1: Characteristics of studies on association between HOTAIR polymorphisms and cancers

HOTAIR polymorphism rs920778 is associated with a general susceptibility cancer

The first step in the analysis was therefore to determine whether either rs4759314 or rs920778 was associated with a general risk for cancer regardless of tissue origin. Analysis including all individuals from all eligible studies revealed that association between the polymorphism rs920778 and increased cancer risk was statistically significant in allele contrast (T vs C, OR = 1.239, 95% CI = 1.032 - 1.487, P = 0.021) and recessive genotype models (TT vs CT+CC, OR = 1.614, 95% CI = 1.082 - 2.406, P = 0.019). However, no significant association between the polymorphism rs4759314 and increased susceptibility to cancer in any genotype model was observed. The analysis thus revealed an association between the T allele or the TT genotype for polymorphism rs920778 and increased risk for cancer. 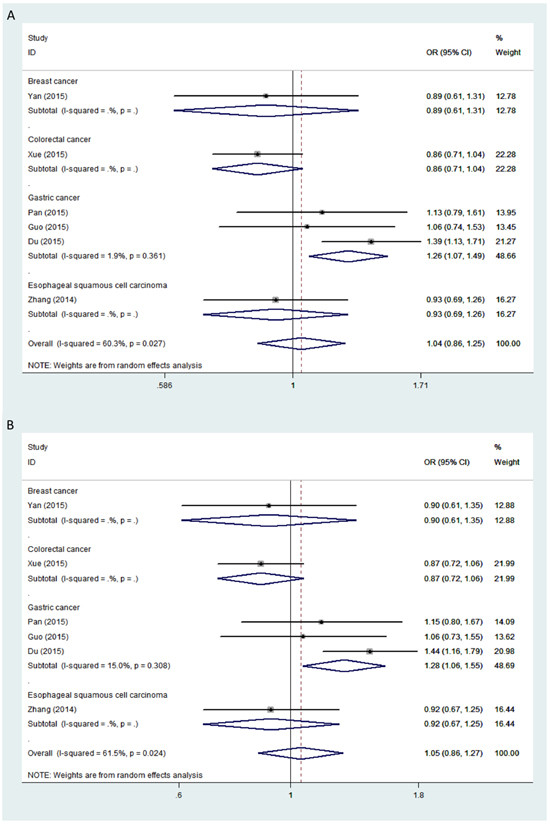 HOTAIR polymorphism rs920778 is associated with cancer susceptibility in Asians 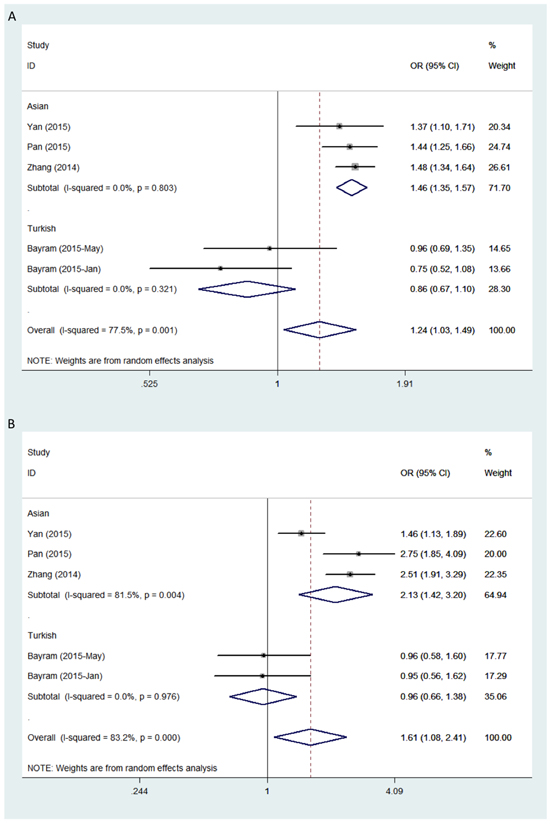 Significant between-study heterogeneity was observed in all genetic models; therefore, analysis using the random-effects model was conducted on data stratified by ethnicity. Under these conditions, statistically significant heterogeneity was no longer observed within Asian or Turkish groups.

The stability of the results of the meta-analysis was assessed in sensitivity analysis, where the effect of each study on the pooled OR was examined by repeating the meta-analysis after sequentially omitting each study. Through the deletion of only a single study which was based on a Turkish population [18], an association of the polymorphism rs920778 with cancer risk emerged under dominant, homozygous, and heterozygous models. The P-values were not highly significant, however (data not shown). Therefore, the results of this meta-analysis including all eligible studies were generally and statistically stable. 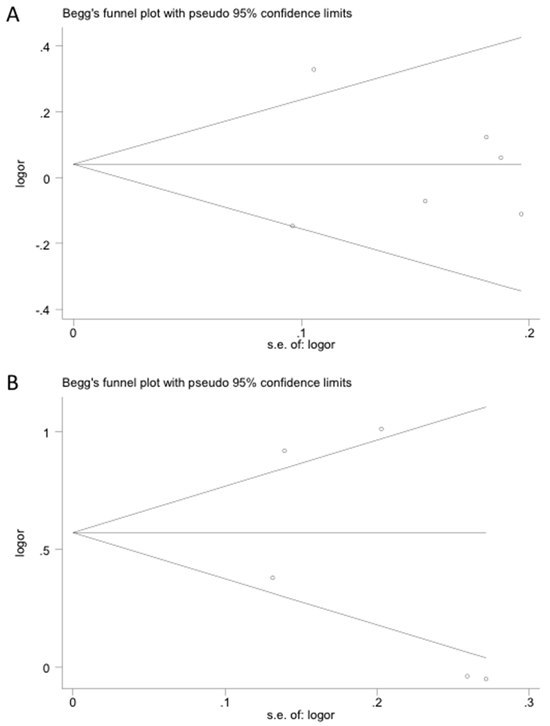 Table 3: ORs and 95% CI for cancers and the HOTAIR polymorphisms under different genetic models

The overexpression of HOTAIR in various cancer types has led to its examination as a candidate molecule for the diagnosis and treatment of the disease. Here, HOTAIR was investigated for potential links to cancer susceptibility. We performed a meta-analysis using data from available cases (n = 7,772) and controls (n = 9,075) in the literature to date to provide further evidence that HOTAIR polymorphisms rs4759314 and rs920778 are associated with cancer risk. Only polymorphism rs920778 was found to be generally associated with increased risk for cancer, but statistically significant associations for both polymorphisms were revealed when data were stratified based on ethnicity and cancer type.

A sufficient number of cases and controls were pooled from different studies and provided a more accurate estimation of the associations between the HOTAIR polymorphisms and cancer risk as compared to individual studies. However, some limitations of this meta-analysis exist. First, although the analysis was performed with strict criteria for study inclusion and precise data extraction, significant between-study heterogeneity existed in some comparisons. However, after analysis stratified by cancer type or ethnicity, heterogeneity between the subgroups was significantly reduced. Second, our analysis was limited to individuals of Asian and Turkish descent so that it remains unclear as to whether these results can be generalized to other populations.

In conclusion, our results indicate that HOTAIR polymorphism rs920778 is more generally associated with cancer risk, particularly in Asians, whereas polymorphism rs4759314 may be a risk factor for gastric cancer. However, these polymorphisms require further evaluation in future well-designed studies as potential genetic susceptibility loci in different cancers as well as ethnic populations.

PubMed, Embase, and Web of Science databases were searched for studies reporting association of HOTAIR polymorphisms with cancer risk up to the date of January 20, 2016. The literature search was performed using free-text words combined with Medical Subject Headings (MeSH), such as “Neoplasms”, “HOTAIR long untranslated RNA, human” and “Polymorphism, Single Nucleotide”. Gene-specific terms (HOX transcript antisense intergenic RNA or HOTAIR) were combined with polymorphism-specific terms (polymorphism or polymorphisms or variation or variations or variant or variants or mutation or mutations or genotype or genotypes) and disease-specific terms (cancer or cancers or tumor or tumors or neoplasm or neoplasms) to retrieve eligible studies. References cited in retrieved articles were also reviewed to identify additional potentially relevant studies.

Inclusion criteria for studies were the following: (1) case-control or cohort study design; (2) evaluating associations between HOTAIR polymorphisms and all types of cancer; (3) providing sufficient data for SNP allele and genotype frequencies; (4) published in English; and (5) performed on humans. Exclusion criteria were the following: (1) reviews and comments; (2) performed on animals, and (3) duplication of a previous publication.

Two investigators (QQ and JW) independently extracted the following data from each study: first author’s surname, publication year, ethnicity, cancer types, numbers of cases and controls, and genotype distributions of cases and controls. Different ethnicity descents were categorized as Asian or Turkish. Study design was stratified into population-based and hospital-based studies. The results were compared and disagreement was resolved by discussion with a third reviewer (BH) until consensus was reached.

The Newcastle-Ottawa Scale and Agency for Healthcare Research and Quality (http://www.ohri.ca/programs/clinical_epidemiology/oxford.asp; maximum score = 9 points) was used to evaluate the methodological quality, which scored studies based on the selection of patients, the comparability of the groups, and the quality of the sampling process. A study awarded a score of 0 - 3, 4 - 6, or 7 - 9 was considered as a low-, moderate-, or high-quality study, respectively.

To obtain a more comprehensive assessment of associations between HOTAIR polymorphisms and cancer susceptibility, five different comparison models were used: allele contrast, dominant, recessive, homozygous and heterozygous. Odds ratio (OR) with 95% confidence intervals (CI) was used to estimate the strength of associations, and the significance of ORs was determined with the Z test. Heterogeneity among the included studies was assessed by Chi square-based Q statistic. A random-effects (DerSimonian-Laird method) or fixed-effect (Mantel-Haenszel method) model was used to calculate pooled effect estimates in the presence (P < 0.05) or absence (P > 0.05) of heterogeneity. The method of subgroup analysis according to the ethnicity or cancer type of the participants was also applied to gain more precise results. Sensitivity analysis was conducted by sequentially excluding each study. The Begg’s test and the Egger’s test were performed to analyze for the presence of publication bias. If any possible bias was observed, the trim and fill method was used to identify and adjust for those studies. Data analyses were carried out using Stata software, version 11.0 (Stata Corporation; College Station, TX, USA). P-values < 0.05 were considered statistically significant.

21. Bayram S, Ulger Y, Sumbul AT, Kaya BY, Rencuzogullari A, Genc A, Sevgiler Y, Bozkurt O and Rencuzogullari E. A functional HOTAIR rs920778 polymorphism does not contributes to gastric cancer in a Turkish population: a case-control study. Fam Cancer. 2015; 14:561-567.