Purpose: Recurrent MET exon 14 splicing has been revealed in lung cancers and is a promising therapeutic target. Because we have limited knowledge about the natural history of MET mutant tumors, the current study was aiming to determine the clinical and pathological characteristics in non-small cell lung cancers (NSCLC).

Lung cancer is the leading cause of cancer deaths worldwide. Non–small cell lung cancer (NSCLC) comprises over 80% of all lung tumors. With better understanding of the major genetic alterations and signaling pathways involved of lung cancer, it has been classified into various subsets with different molecular and clinicopathologic characteristics [1]. Target-based therapeutics designed to specific molecular clusters have revolutionized lung cancer treatment. The most representative examples are gefitinib/erlotinib and crizotinib for lung adenocarcinomas harboring EGFR mutations and ALK/ROS1 fusion, respectively [2, 3]. Even with broad genotyping, there remains 20%–40% of lung adenocarcinoma and 80% of lung squamous cell carcinoma without any known targetable oncogenic mutations [4–7].

MET, encoding the proto-oncogene tyrosine kinase c-MET, is the receptor for hepatocyte growth factor (HGF). The activation of this kinase by amplification and overexpression could promote cancer [8–10]. MET amplification is uncommon in NSCLCs and was observed in 2%–4% of previously untreated patients [8, 9, 11]. MET targeted therapies are currently undergoing early-phase clinical trial evaluations in lung cancer patients [12, 13].

Recently, MET gene exon 14 skipping was identified as a potential driver mutation in lung and colon tumors [14–18]. Strikingly, NSCLC patients harboring these genetic alterations have shown remarkable responses to MET inhibitor (crizotinib or cabozantinib) in several independent early-phase trials, suggesting that MET might be a novel druggable target in lung cancers [15–18]. The clinicopathologic characteristics of lung cancer patients with MET exon 14 skipping have not yet been described. These results provide us with an impetus to understand the natural history of MET mutant tumors.

Here, we demonstrated that MET exon 14 skipping is a novel oncogenic driver in lung cancers by clinical and pathological characteristics. This new molecular subset of patients had distinct features, allowing clinicians to select enriched subpopulations for genotyping and with whom randomized prospective clinical trials of targeted therapies could be efficiently performed.

From October 2007 to June 2013, we screened out 1770 qualified patients in this study cohort, including 1305 adenocarcinomas, 48 adenosquamous carcinomas and 417 squamous cell carcinomas. There were 991 (56.0%) male patients and 779 (44.0%) female patients. Ages below or above 60 years old were almost equally distributed. Seven hundred and seventy-nine patients were current smokers or former smokers; nine hundred and ninety-one patients were non-smokers. Obviously, most adenocarcinomas were female and non-smoking patients. Squamous cell carcinomas predominantly occurred in male and smoking patients. More detailed information was illustrated in Table 1.

The genetic alterations of 14 genes were screened in all NSCLCs (Table 1, Figure 1). Of 1770 patients, MET exon 14 skipping was detected in 23 patients (1.3%), which was the fourth most frequently identified driver in NSCLCs (Figure 1A) (Detailed data was shown in Supplementary Table S2). It was found in 21 (1.6%) of 1305 adenocarcinomas, and in two (4.2%) of 48 adenosquamous cell carcinomas. No mutant MET was detected in squamous carcinomas. We further revealed that 1.9% (17 of 904) of non-smoking lung adenocarcinomas (NSLAD) harbored MET exon 14 skipping (Figure 1B). Among 80 NSLADs that were negative for known oncogenic drivers, 21.25% of them harbored mutant MET.

MET exon 14 skipping can only be detected using mRNA isolated from frozen tissues, which are commonly not available in clinical practice. Thus, we examined whether IHC could be utilized as a screening tool for detecting mutant MET. Of the 23 MET positive samples subjected to IHC, four scored as negative, nine as weak, eight as moderate, and two as strong. Another 64 pan-negative lung adenocarcinomas were also stained for MET protein; 42 scored as negative, 12 scored as weak, seven as moderate, and three as strong (Figure 3). The frequency of samples with MET positive in MET exon 14 skipping tumors was significantly higher than that in pan-negative samples (82.6% VS. 34.4%, Chi-Square test, p < 0.0001).

We showed that 18 of 23 (78.3%) lung tumors with MET exon 14 skipping had EGFR and/or HER2 gene copy number gains. Among 19 invasive lung cancers, 94.7% of MET mutant tumors showed EGFR and/or HER2 gene copy gains, but none of the cases with AAH/AIS harbored EGFR or HER2 gene copy alterations (Table 3), indicating the pivotal role of EGFR or HER2 in formation of invasive lung carcinoma in MET positive tumors. We also found that EGFR copy number gain was seen in all lung adenocarcinoma patients whose tumor harbored MET exon 14 skipping in TCGA (The Cancer Genome Atlas) cohort [6]. 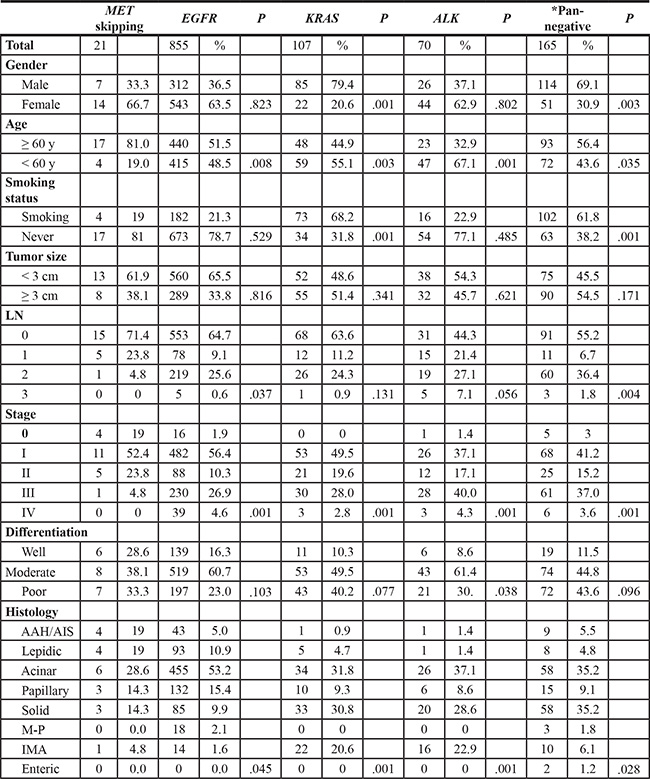 Table 4: Comparison of clinicopathologic characteristics of patients with MET exon 14 skipping and with MET copy number gain in lung adenocarcinomas

The proportion of precancerous or early lesions (AAH/AIS/Lepidic) (38.1%) in MET exon 14 skipping tumors was significantly higher than that of EGFR (15.9%), KRAS (5.6%), HER2 (21.9%), BRAF (15%), ALK (2.9%), RET (5.6%), and pan-negative (10.3%) lung adenocarcinomas, indicating that mutant MET alone might be insufficient to transform normal cells but depend on other genetic alterations progressing into more aggressive carcinoma subtypes. 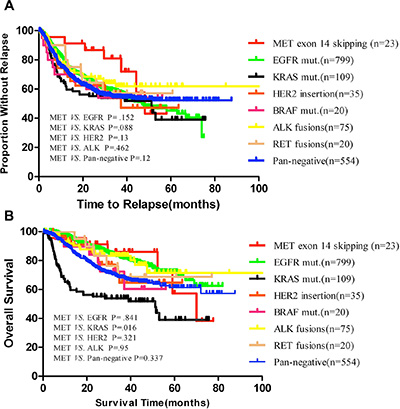 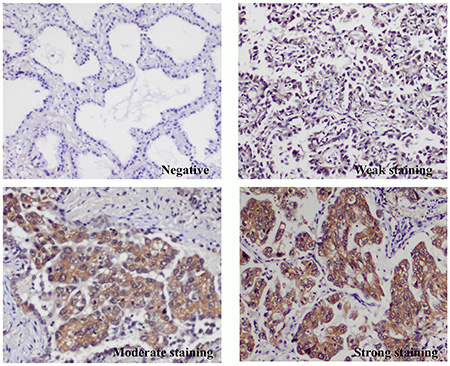 Among the 23 NSCLC patients with MET exon 14 skipping in our cohort, a 68 year-old non-smoker with MET, EGFR, and HER2 gene copy number gains in his tumor had relapsed. The patient showed a stable disease response to EGFR inhibitor Iressa, and the status had been maintained for 12 months (Figure 4). This modest clinical activity of Iressa might indicate that blockage of EGFR might serve as a salvage therapy for treatment of advanced MET exon 14 skipping positive patients if MET inhibitor is not available. 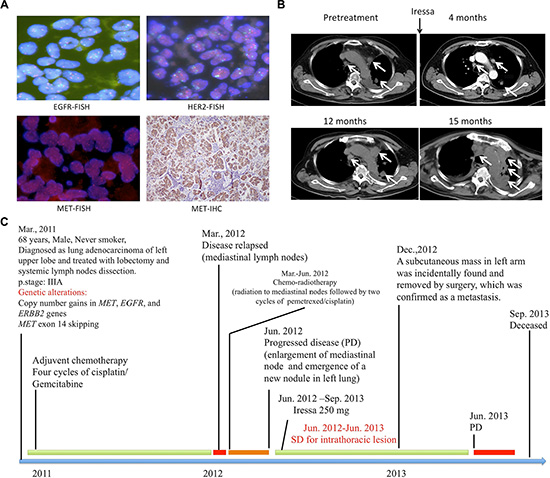 In this study, we identified a subset of patients harboring MET exon 14 skipping as a novel oncogenic driver in lung cancers. As we previous reported [19], 90% of non-smoking lung adenocarcinomas (NSLAD) of East Asian populations were found to harbor known drivers that could be exploited as therapeutic targets. In this study, we examined 904 non-smoking NSLADs for all known oncogenic drivers. To the best of our knowledge, this study represents the most comprehensive analysis of mutation profiles in NSLADs. Of all non-smokers, 93.3% were found to carrying oncogenic driver mutations and 1.9% harbored MET exon 14 skipping. Given that MET exon 14 skipping defines a distinct subset of NSCLC patients characterized by female, non-smoker, and older age, further prospective clinical trials could exploit these clinical profiles to help clinicians select patients most likely to carry mutant MET and evaluate the clinical efficacy of MET inhibitor.

Garrett M.F. et al. demonstrated that NIH-3T3 cells stably expressed mutant MET showed anchorage-independent growth. This constitutive activity was sensitive to MET inhibitors in NIH-3T3 cells harboring MET exon 14 alterations [23]. It is interesting that five independent studies almost simultaneously reported the efficacy of MET inhibitors (crizotinib and capmatinib) for treating patients harboring MET exon 14 skipping [15–18, 23]. Of the five studies, 11 patients are evaluable for responses to the MET inhibitor. The response rate was 83.3% (nine of 12 lesions) and the median progression free survival was five months (range of two to 13 months). The antitumor activity shown in early phase clinical trials strongly supports MET exon 14 skipping as a bona fide target of the MET inhibitor. However, the responses to the MET inhibitor are quite heterogeneous. There still remains a substantial amount of tumor cells that are intrinsically resistant to the MET tyrosine kinase inhibitor. The molecular basis of the response heterogeneity is largely unknown, and no biomarker is available for predicting a response.

Remarkably, almost four-fifths of the patients with MET exon 14 skipping in our cohort had EGFR and/or HER2 gene copy number gains. Whether this observed consequence was a coincidence or an intrinsic connection remained unclear. One patient harboring MET exon 14 skipping simultaneously with EGFR, HER2 gene copy number gains received Iressa and maintained his disease for 12 months. It might be difficult to Figure out which alternation of genes played a more important role. Specific MET inhibitors should be an excellent choice according to the reported data; EGFR-TKIs, however may come to rescue as a replacement, especially when patients have had EGFR gene alternations. Since these three genes are essential in cell signaling, affecting various kinds of activities in cells such as survival, proliferation and invasion, completely understanding of the interaction of these genes is a necessity, and further experiments are urgently demanded. Future possible therapeutic strategy may hide in this network by double or triple targeting these molecules.

In summary, MET exon 14 skipping defined a new molecular subset of NSCLC with identifiable clinical characteristics. These patients are typically older, female, and non-smokers who might benefit from MET targeted therapy. Most of the lung tumors with MET exon 14 skipping had EGFR and/or HER2 gene copy number gains. Additionally, the therapeutic EGFR inhibitors might be an alternative treatment for patients with MET mutant NSCLC.

From October 2007 to June 2013, a total of 1770 frozen surgically resected NSCLC tumor tissues, including 1305 lung adenocarcinomas, 48 adenosquamous carcinoma and 417 squamous cell carcinomas, were prospectively collected in the Department of Thoracic Surgery of Fudan University Shanghai Cancer Center. This study was approved by the Institutional Review Board of the Fudan University Shanghai Cancer Center. All patients provided written informed consent. Two pathologists (Y.L. and X.X.S.) confirmed the diagnosis by H&E staining and verified by immunohistochemistry as TTF1, P63, Nepsin A and CK5/6. DNA and RNA were collected as previously reported [19, 20].

Clinical and pathologic data were prospectively collected for analyses, including age at diagnosis, sex, smoking history, histologic type, pathologic TNM stage, tumor size, and tumor differentiation. Patients were observed in clinic or by telephone for disease recurrence and survival from the date of diagnosis. Of the 1770 NSCLC patients, 56 patients who were incidentally found to have pleural metastasis were excluded from survival analysis. Seventy-nine patients of loss to follow-up were also excluded. A total of 1635 NSCLC patients were included for analysis with a median follow-up time of 32.83 months.

Associations between mutations and clinical and pathologic characteristics were analyzed by the χ2 test or Fisher’s exact test. Survival curves were estimated using the Kaplan-Meier method, with differences in survival assessed by the log-rank test. Data were analyzed using Statistical Package for the Social Sciences Version 19.0 Software (SPSS Inc.). The two-sided significance level was set at p < 0.05.

We thank Dr. Matthew Meyerson and Dr. William Pao for valuable advice regarding this study.

The authors have reported to Oncotarget that no potential conflicts of interest exist with any companies/organizations whose products or services may be discussed in this article.

Role of the sponsors

The sponsors had no role in the design of the study, the collection and analysis of the data, or the preparation of the manuscript.