Conventional non-targeted chemotherapy regimens are the standard of care for patients with ampullary (AA) and pancreatic adenocarcinoma (PDAC). Yet, clinical trials frequently offer targeted agents to patients without screening for actionable pathogenic alterations. Less than 10% of registered drug intervention trials for PDAC include a biomarker stratification strategy. [1] The five most commonly mutated genes of PDAC in the Catalogue of Somatic Mutations in Cancer (COSMIC) database are KRAS (71%), TP53 (49%), CDKN2A (22%), SMAD4 (20%), and ARID1A (6%). [1] In 2014, the National Cancer Institute (NCI) created a scientific framework for PDAC with 4 initiatives. [2] The objective of one of these initiatives was to expand PDAC research to develop new approaches that interfere with RAS oncogene dependent signaling pathways. RAS can activate several downstream effectors, including the PI3K-AKT-mTOR and the RAS-RAF-MEK-ERK pathways, which are involved in cell survival and proliferation.

Evolving novel therapeutic strategies include agents that not only target the tumor itself, but also the tumor microenvironment. Such unique or combined approaches include vaccine based immunotherapy, the use of stromal depleting agents, BRCA related therapies, inhibitors of autophagy, angiogenesis inhibition and NOTCH signaling pathway inhibitors. [3–5] Genetic signatures could be used to direct personalized PDAC treatment in the future. [6]

The ability to identify distinct mutation subsets via endoscopic ultrasound fine needle aspiration (EUS FNA) molecular cytology could greatly aid clinical trial patient stratification for optimal therapy selection and offer predictive markers. Such a development would represent a crucial step in the field of personalized medicine. It has been observed that tumors characterized by a concurrent TP53 and SMAD4 wild type status have an indolent behavior and an improved therapy response with low metastatic potential. [7, 8] However, TP53 mutant tumors accompanied by a SMAD4 wild type profile exhibit increased metastatic potential, and finally a combination of TP53 and SMAD4 mutations represent the most aggressive and widespread metastatic PDAC. Therefore, stratification of cytotoxic agent eligible patients using EUS FNA specimens to determine the multigene mutation status may be of prognostic benefit and facilitate appropriate tumor specific targeted therapy.

Characterization of the KRAS mutational profile

Characterization of the TP53 mutational profile

Twenty-one patients harbored 20 TP53 mutations including 15 missense mutations, 2 nonsense mutations, 1 splice site mutation, 1 in-frame deletion and 1 single base pair duplication resulting in a premature stop codon (Supplementary Table 2). TP53 was the second most frequently identified pathogenic alteration in patients, 19 (90.5%) and 5 (23.8%) of whom had either a KRAS or SMAD4 co mutation.

Characterization of the SMAD 4 mutational profile 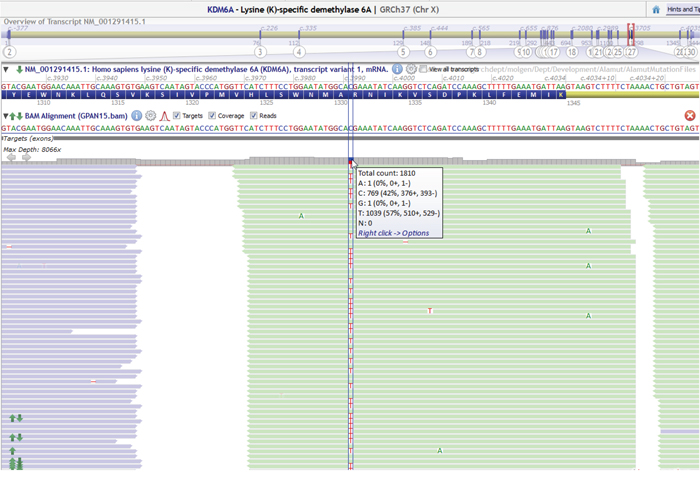 Figure 2: Example of a sequencing data in Alamut displaying nonsense mutation (c.3991C>T, p. Arg1331X) in KDM6A with an allele frequency of 57%.

Pancreatic ductal and ampullary adenocarcinomas are biologically heterogeneous tumors. Detailed global genomic analyses have identified that there are 12 core signaling pathways and 16 genes significantly genetically altered in the majority of PDAC patients. [10–11] We have previously reported a 50 gene mutation assessment of a spectrum of other primary, locally advanced and metastatic diseases using EUS FNA cytology specimens. [9, 12–16] Our newly presented data represent a multigene mutation assessment of 160 cancer associated genes using targeted NGS. This unique assessment further exemplifies the collective genetic diversity of PDAC - AA and may be used to identify specific molecular patient cohorts most likely to benefit from agents designed to target specific pathways or genomic features. [17]

The ability to apply targeted NGS to routine EUS FNA cytology offers tremendous promise for such an endeavor in an evolving era of individualized medicine. We have observed a broad spectrum of pathogenic alterations in 21 genes, whereby 93% of patients had ≥ 2 pathogenic alterations per tumor. This further highlights the clear need for customized combination therapy with the goal of enhancing therapeutic response and patient outcome.

The performance of KRAS mutation analysis in EUS FNA pancreas mass specimens from a variety of molecular techniques is well documented. [18–23] However, we report that an EUS FNA molecular cytology assessment with targeted NGS has the ability to identify and dissect KRAS mutation subtypes as part of a multigene mutation analysis. Furthermore, EUS FNA identified that 31% of our cohort harbored a SMAD4 mutation and they were more likely to harbor additional pathogenic alterations when compared to their WT counterparts. We did not observe currently “druggable” mutations within the evaluated cohort as the following were of wild type status: BRAF, PIK3CA, BRCA, PALB2, ERBB1, MET, FGFR1, and EGFR. Nevertheless, our discoveries could be applied to prospective clinical trials and aid a combined phenotypic-genotypic approach to facilitate the development of precision medicine.

These are the first data from a commercial 160 cancer gene panel demonstrating that EUS FNA cytology specimens provide an ideal surrogate to surgical specimens for detecting pathogenic alterations associated with PDAC and AA. This information is key given the narrow cohort that would undergo a surgical biopsy and the necessity for pre-operative delivery of personalized tumor specific care. Interestingly, we identified that the observed cytology mutational spectrum was broader than that of the corresponding surgical pathology specimens. Mutations in GRIN2A, GATA3 and KDM6A which have been identified in melanoma, breast cancer and recently identified as a candidate driver of pancreatic carcinogenesis, respectively, were only identified within the EUS FNA cytology smear specimens. [24–26] The absolute multigene mutational profile concordance was 83%. This may in part be a reflection upon the tumor microenvironment which is otherwise referred to as desmoplasia or stroma and is comprised of immune cells, macrophages, fibroblasts, myofibroblasts, vascular components and a dense extracellular matrix. [27] Up to 90% of a PDAC tumor mass is composed of the aforementioned desmoplastic stroma which can make the evaluation of tumor cells within a histopathologic specimen challenging. [28] Cytology FNA specimens have the potential to capture more mutations due to the natural concentration of tumor cells in such specimens, as the less cohesive tumor cells may be extracted while the residual dense stromal matrix is excluded. Furthermore, intratumoral heterogeneity represents a variation in tumor behavior between varying sites within the same tumor. We speculate that tumor heterogeneity may have been responsible for the additional mutations detected in 3 cytology specimens. This morphological variation between regions within a tumor has long been familiar to histopathologists but is now gaining increased recognition among clinicians as it may partially account for an impaired treatment response. EUS FNA has the potential to sample cells from a greater number of regions within a tumor than a single FFPE section due to the multiple FNA passes obtained from the tumor in question during an EUS procedure. All of these procedural and sample preparation factors favor EUS FNA as a more sensitive technique for detecting molecular alterations within desmoplastic tumors.

This is a small but fruitful study of archived EUS FNA specimens to illustrate tumor genetic diversity, but if completed on a larger scale could define subgroups with distinct biologic behaviors and even compare and contrast individuals with pancreas adenocarcinoma and separately those with ampullary adenocarcinoma. In an attempt to overcome molecular cytology adequacy challenges, we adhered to strict cytology and FFPE slide screening protocols to qualify samples likely to have a successful NGS. By so doing, it reduced the numbers of patients available to us for evaluation. This therefore prompts the future refinement not only of rapid on site evaluation (ROSE) for cytology adequacy parameters but also corresponding metrics for ROSE molecular adequacy assessments. If such “molecular adequacy” parameters were determined within the procedure room, it could ensure that superior material is obtained for molecular testing than is currently the standard of care for diagnostic purposes only. From a very practical perspective, the turnaround time for molecular diagnostic testing from biopsy procurement to delivery of test results needs to be minimized, if it is to become useful and relevant in a clinical setting. Cancer gene panels are limited to mutation assessment, which although very generous at 160 genes for this particular study, commercial panels most often do not include assessments of chromosomal translocations and copy number variants, which would certainly broaden our understanding of an individual tumor’s biologic behavior.

In summary, our study has demonstrated the ability to use a moderate-large targeted NGS cancer gene panel in cytology smear specimens obtained via EUS from PDAC and AA patients as a suitable surrogate for surgically acquired specimens. Such cytology specimens may in fact deliver incremental genetic diversity information. Stratification of patients and targeting of therapy as per NCI initiatives is essential to further expand the developing field of personalized medicine in a truly heterogeneous patient population. The combination of a molecular prognostic and targeted therapy sensitivity grouping may complement the conventional clinicopathologic risk stratification criteria in decision making for clinically based or clinical trial neoadjuvant and adjuvant therapies and guide biomarker driven therapeutic development.

Following Mayo Clinic IRB approval, primary malignancy DNA was extracted from 47 chemotherapy naïve patients from archived (2009-2013) molecular cytology single slide smear specimens. The surgical stage pathology grouping was as follows: Ia (7%), Ib (10%), IIa (14%), IIb (62%), III (4%) and IV (3%). Perineural invasion was identified in 13 (44.8%) patients and an R0 status was established in 26 (89.7%) patients. All selected slides had ≥ 20% tumor cells in a background of benign nucleated cells. The use of strict screening criteria allowed the exclusion of 13 patients with insufficient DNA quantity (< 5 ng/μl). (9) Targeted NGS was performed from the remaining 34 patients, of whom 18 had paired matched surgical pathology specimens with sufficient material for a multigene mutation concordance evaluation.

Multiplex PCR was performed by amplifying 10 ng of DNA in each of 4 separate PCR reactions using a commercial Human Comprehensive Cancer GeneRead™ DNAseq Targeted Panel V2 (Qiagen Inc, Valencia, CA) per manufacturer protocol. This panel is a collection of multiplexed PCR primer assays for targeted enrichment of the coding (exonic) regions of the 160 genes (7,951 amplicons) that are most frequently mutated in malignancy with an identifiable oncogenic consequence (Supplementary Table 3).

Continuous variables were reported as mean and standard deviation or median and interquartile range and compared by using the Student t test or Mann Whitney U test. Categorical variables were reported as frequency (%) and were compared by either a 2-tailed Fisher exact test or Pearson χ2 test, where appropriate. Progression free survival (PFS) was defined as the time from EUS FNA to any objective evidence of disease progression or death, whichever occurred first. Cox proportional hazards model was performed to estimate PFS data. All tests were 2-sided, with P ≤ .05 as the criterion standard for determining significance. The statistical software package JMP Version 11 (SAS Institute, Cary, NC) and MedCalc version 10 (MedCalc Software, Mariakerke, Belgium) were used for statistical analysis.