Combined preoperative concentrations of CEA, CA 19-9, and 72-4 for predicting outcomes in patients with gastric cancer after curative resection

In many cancers, prognostic factors are useful for identifying high-risk patients and in individualizing treatment. We sought to determine whether a combination of tumor markers (CTM) would improve prognostic accuracy in patients with gastric cancer (GC). The CTM score, which is derived from serum concentrations of carcinoembryonic antigen (CEA), carbohydrate antigen 19-9 (CA 19-9), and carbohydrate antigen 72-4 (CA 72-4), was tested retrospectively in 1134 patients with GC undergoing curative resection between October 2000 and December 2012. The CTM score was 2 for patients with two or three elevated markers, 1 for those with one elevated marker, and 0 for those no elevated markers. Overall survival (OS) in patients with CTM scores 0, 1, and 2 was 61.8%, 31.4%, and 15.1%, respectively (P<.001). The CTM score independently predicted OS on multivariate analysis (HR, 1.95; 95% CI, 1.73 to 2.21; P<.001). Moreover, the area under the receiver operating characteristics curve of the CTM score (0.67; 95% CI, 0.64 to 0.70) was higher than the values of any individual marker (0.63, 0.57, 0.57; P<.001 for all comparisons). The CTM score independently predicted postoperative survival in GC, and it may have better clinical utility than individual tumor markers for identifying high-risk patients with GC.

Gastric cancer (GC) is one of the most common and deadly malignancies worldwide, with a high incidence of recurrence and metastasis, even after radical surgery [1, 2]. Despite advances in surgery and multidisciplinary treatment, the long-term postoperative survival of patients with advanced-stage GC still remains low [3, 4].

In many cancers, independent prognostic factors have been useful in identifying high-risk patients and in adjusting treatment. The tumor-nodes-metastasis (TNM) system has been the reference standard for assessing GC prognosis. However, the prognosis for patients with GC can vary, even when they have the same TNM stage, and the most accurate TNM staging requires waiting for postoperative histologic results [5]. Therefore, clinicians and researchers continue to seek other prognostic factors that might help improve the clinical management of patients with GC.

In a variety of cancers, tumor markers have been useful in assessing prognosis and tailoring treatments [6–8]. These markers, which are secreted either by the tumor or as a response to the tumor, have also been widely used for cancer screening, diagnosis, and postsurgical surveillance[9, 10]. The most common markers used in GC have been carcinoembryonic antigen (CEA), carbohydrate antigen 19-9 (CA 19-9), and carbohydrate antigen 72-4 (CA 72-4) [11–13]. The value of using these individual tumor markers in GC for prognostic assessment has been questioned because of their low sensitivity and high false-positive rate [14]. However, recent reviews have suggested that, when combined, these three markers performed better than when used alone, both in staging before chemotherapy and surgery and in improving sensitivity without impairing specificity [14, 15].

Given these results, we postulated that a specific combination of preoperative serum tumor markers might be useful in determining the prognosis in patients with GC. We developed a new combination scoring system involving CEA, CA 19-9, and CA 72-4, which we named the CTM (combination of preoperative tumor markers) score, and validated the score with a retrospective study to determine whether the CTM score was an independent prognostic factor for GC. Our goal was to determine the CTM scores of our patients with GC and to compare these scores to a variety of clinicopathological variables, including overall survival (OS). 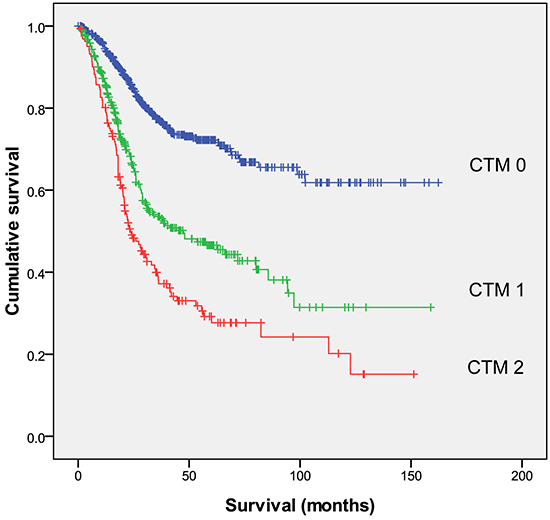 Figure 1: Relationships among the three CTM groups (CTM 0, CTM 1 and CTM 2, from top to bottom) and overall survival. CTM = the combination of preoperative tumor markers. 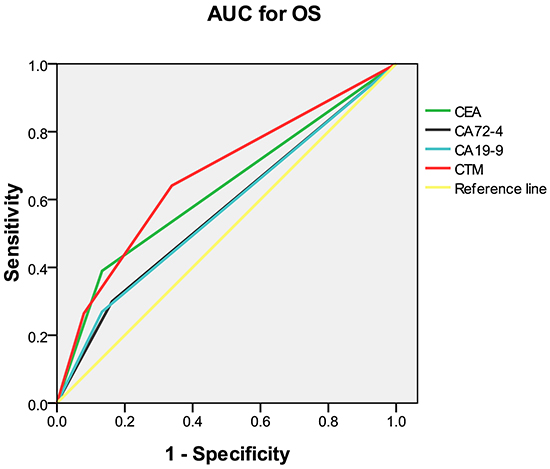 Table 4: Comparison of the areas under the curves for overall survival

In our study of patients with GC, we used a combination of three tumor markers, CEA, CA 19-9, and CA 72-4, to develop a new scoring system, which we called CTM (combination of preoperative tumor markers). Our goal was to determine the prognostic value of CTM scores in patients with GC undergoing curative resection. We found that the CTM score was independently associated with OS in GC and this association held up in GC TNM stages I, II, and III.

The most common tumor markers used in patients with GC have been CEA, CA 19-9, and CA 72-4, but none of these markers are currently recommended for use in the screening, diagnosis, or postsurgical surveillance of GC by the current National Comprehensive Cancer Network Clinical Practice Guidelines. The potential value of these tumor markers was addressed by a recent meta-analysis of 33 studies. This showed that CEA, CA19-9, and CA 72-4 performed better in combination than individually, by improving sensitivity without impairing specificity, when used for screening, diagnosis and follow-up monitoring of GC [15].

We were interested in evaluating these tumor markers as prognostic factors that might help improve the clinical management of patients with GC. Although some studies evaluating the prognostic value of these markers have reported mixed results, other studies have suggested that elevated CEA, CA 19-9, and CA 72-4 concentrations may be associated with tumor progression and may provide additional prognostic information in GC [12, 16–20].

These results are supported by other studies. One group found that elevated serum concentrations of CEA, CA 19-9, and CA 72-4 were significantly associated with lower 3-year cumulative survival rates in patients with GC [21]. Another study reported that CEA and CA 19-9 concentrations were independent prognostic factors for GC [11]. Finally, others have reported that although individual tumor markers were not independently associated with survival, elevations in all preoperative CEA, CA 19-9, and CA 72-4 concentrations were associated with a worse prognosis in patients with GC. The authors concluded that when used together, the combination of these three markers might provide additional prognostic information in patients having surgery for GC and that patients with a preoperative elevation of any of these three biomarkers should be considered to be at high risk for recurrence, even in early GC [22].

Why the combination of elevated preoperative tumor marker concentrations was associated with reduced OS remains unclear [23]. The mechanisms of action of these tumor markers may provide some insight into why their elevation is associated with a poorer prognosis. CEA is important in promoting tumor cell adhesion and signal transduction. Moreover, given that CEA and proliferating cell nuclear antigen are closely related, CEA may also be involved in tumor cell proliferation [24]. Likewise, CA 19-9 is important in the adhesion of tumor cells to endothelial cells, so cells expressing this substance may have greater invasive and metastatic potential [25]. Carbohydrate antigen 72-4 has also been associated with both tumor cell adhesion and tumor metastasis [8, 26]. The specific activities of these substances may explain why their high serum concentrations are associated with a poor prognosis.

The CTM score was associated with OS within each TNM stage, suggesting that the CTM score has prognostic value in GC stages I, II, and III. Thus, the CTM score may help clinicians identify high-risk patients earlier, particularly those thought to be at low-risk because of a low TNM stage. Indeed, patients with a low TNM stage but a high CTM score may benefit from closer monitoring or more aggressive adjuvant therapy. We agree with others that it might be worth exploring the use of GC tumor markers and CTM score in the early postoperative period to help guide clinical decision-making [27].

Our study has several limitations. It was a single-center rather than multicenter investigation. Nevertheless, one benefit of this arrangement was that surgical procedures (R0 resection plus D2 lymphadenectomy), laboratory assays, and follow-up evaluations were standardized and consistent during the study period. In addition, our low- and high-risk patients had different postoperative treatment (adjuvant chemotherapy), which may have confounded the results. Finally, we used OS as our primary outcome, and our study may have been strengthened by the use of other survival measures, such as disease-free survival. As a result, our conclusions might need to be validated with the use of additional outcome measures.

In conclusion, CTM is independently associated with OS in GC, suggesting that it can be considered a valuable independent prognostic marker in patients undergoing curative resection for GC. The CTM score may have better clinical utility than individual tumor markers for identifying high-risk patients with GC.

The study was approved by the Research Ethics Committee at the Cancer Center of Sun Yat-sen University. All patients provided written informed consent before we performed our retrospective analysis of their medical records.

We retrospectively analyzed clinicopathological data from 1134 patients with GC who underwent surgical resection at Sun Yat-sen University Cancer Center between October 2000 and December 2012. All patients had histologically confirmed stage I through III gastric adenocarcinoma, as defined by the 7th edition of the American Joint Committee on Cancer (AJCC) tumor-nodes-metastasis (TNM) staging system [5].

Experienced surgeons performed total gastrectomy with D2 lymphadenectomy following the Japanese Research Society for Gastric Cancer (JRSGC) guidelines[29]. All patients had gastric resections in which margins were microscopically negative and no gross or microscopic tumor remained in the primary tumor bed (R0). Patients with stage III or high-risk stage II GC and no marked comorbidities precluding chemotherapy had their cases discussed at a multidisciplinary conference and were offered 5-fluorouracil-based (5-FU) adjuvant chemotherapy after surgery. Patients who met all of the following criteria were included in the study: 1) complete clinicopathological and follow-up data, 2) no neoadjuvant chemotherapy or radiotherapy, 3) no other synchronous malignancy, 4) no evidence of distant metastases, and 5) no residual or recurrent GC.

The clinicopathological characteristics of all patients were abstracted from our hospital information system. The following variables were collected for each patient: age, sex, preoperative laboratory measurements, surgical pathology report, and time between surgery and the last available follow-up visit or death, whichever came first. Patients with papillary and well- or moderately-differentiated GC were included in the well-differentiated histology group, and those with undifferentiated, signet ring cell, and mucinous GC were included in the poorly-differentiated histology group [30].

Patients were followed clinically every 3 months during the first 2 years after surgery and every 6 months thereafter until at least 5 years after surgery or until they died, whichever came first. The final follow-up date for the study was July 2015. Postoperative follow-up assessment involved medical history, physical examination, laboratory testing, upper gastrointestinal endoscopy, and dynamic chest/abdominal computerized tomography (CT) scan.

Results are presented as means and 95% confidence intervals. Differences among the groups were analyzed using the Pearson chi-square test and Kruskal-Wallis test. Survival analysis was performed with the Kaplan-Meier method, and differences between survival curves were compared with a log-rank test. Variables significant at the 0.05 level in the univariate or unadjusted analysis were selected for inclusion in a final multivariate Cox proportional hazards model. Variables were assessed for interaction and co-linearity.

The authors wish to thank all of the individuals who assisted with this study.

18. Victorzon M, Haglund C, Lundin J and Roberts PJ. A prognostic value of CA 19-9 but not of CEA in patients with gastric cancer. Journal of the European Society of Surgical Oncology and the British Association of Surgical Oncology. 1995; 21: 379-384.