Follicular dendritic-cell sarcoma (FDCS) is a rare and recalcitrant disease. In the present study, a patient-derived orthotopic xenograft (PDOX) mouse model of FDCS was established in the biceps muscle of nude mice. The FDCS PDOX was resistant to both doxorubicin (DOX) and NVP-BEZ235, dactolisib (BEZ) an experimental agent which is a dual pan-phosphoinositide 3-kinase-mammalian target of rapamycin inhibitor. However, in contrast to DOX and BEZ, the FDCS PDOX was sensitive to the tumor-targeting bacterial strain, Salmonella typhimurium A1-R (S. typhimurium A1-R). The combination of S. typhimurium A1-R and either DOX or BEZ did not increase the antitumor efficacy of S. typhimurium A1-R, indicating that DOX and BEZ were not active in this PDOX model. The efficacy of S. typhimurium A1-R in this recalcitrant FDCS gives strong impetus to move bacterial therapy to clinical trials for this disease. The findings of the present study are of particular importance since it demonstrates that S. typhimurium A1-R is effective in a PDOX model of FDCS established from a patient who failed DOX therapy.

Follicular dendritic-cell sarcoma (FDCS) is a highly recalcitrant disease.FDCS is rare and arises from follicular dendritic cells [1].CHOP chemotherapy, which contains cyclophosphamide (CTX), doxorubicin (DOX), vincristine and prednisone, is most frequently used with FDCS with transient, partial responses observed in some patients [2]. Complete responses to CHOP are infrequent [1]. The 5-year overall survival (OS) for localized FDCS is 55% and for metastatic disease is 38% [3].Therefore, novel approaches to FDCS are needed [1, 2].

The tumor-targeting Salmonella typhimurium A1-R (S. typhimurium A1-R) strain was developed by our laboratory [4]. S. typhimurium A1-R is auxotrophic for Leu–Arg, which prevents it from mounting a continuous infection in normal tissues. S. typhimurium A1-R was able to inhibit or eradicate primary and metastatic tumors as monotherapy in nude mouse models of major cancers [5], including prostate [6, 7], breast [8–10], lung [11, 12], pancreatic [13–17], ovarian [18, 19] stomach [20], and cervical cancer [21], as well as sarcoma cell lines [22–25] and glioma [26, 27], all of which are highly aggressive tumor models.

Recently, a patient with high-grade undifferentiated pleomorphic soft tissue sarcoma from a striated muscle was grown in the right biceps femoris muscle of mice to establish a patient-derived orthotopic xenograft (PDOX) model. This sarcoma PDOX was sensitive to DOX and S. typhimurium A1-R followed by DOX, could eradicate this tumor [25].

The treatment schedule for the FDCS PDOX is shown in Figure 1. Three weeks after orthotopic implantation, tumors reached 5 mm in diameter and continued to grow rapidly (Figure 1A). 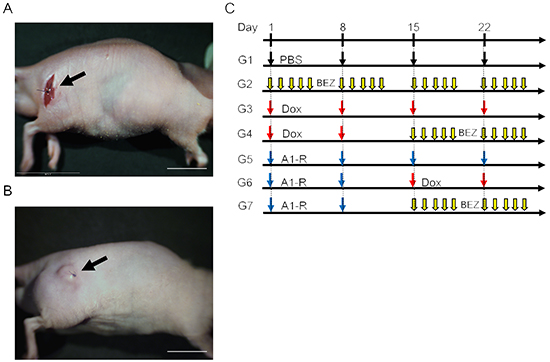 Figure 1: PDOX model of follicular dendritic-cell sarcoma (FDCS) and treatment protocol. A. During the sarcoma transplant procedure in the muscle. B. Three weeks after implantation. C. Treatment protocol.

After intraperitoneal (i.p.) administration of S. typhimurium A1-R for four weeks, and two subsequent weeks without treatment, the green fluorescent protein (GFP)-expressing bacteria could be visualized by fluorescence imaging in the resected tumor. S. typhimurium A1-R was imaged directly as well as by mincing of the tumor and subsequent colony outgrowth from the minced tissue on agar medium (Figure 2). 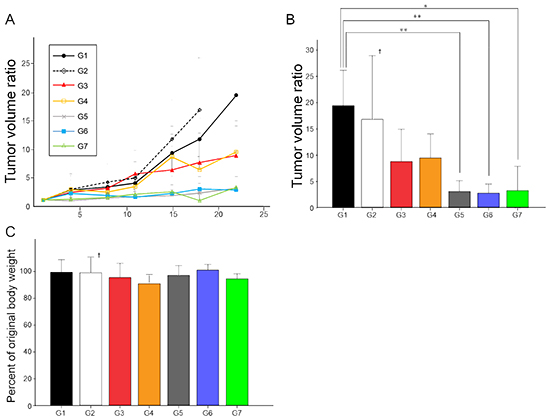 The patient’s original tumor (Figure 4A) and untreated PDOX (Figure 4B) showed identical histologic features which are characteristic for FDCS, including relatively uniform ovoid-to spindle-shaped cells present in short fascicles and storiform patterns with associated lymphocytes sprinkled throughout the tumor. Similar to the original tumor, the PDOX showed a high rate of mitoses (>20/10 High-power fields [HPFs]) (Figure 4B). The patient’s original tumor was positive for CD35 and fascin by immunohistochemistry (data not shown), supporting the diagnosis of FDCS. 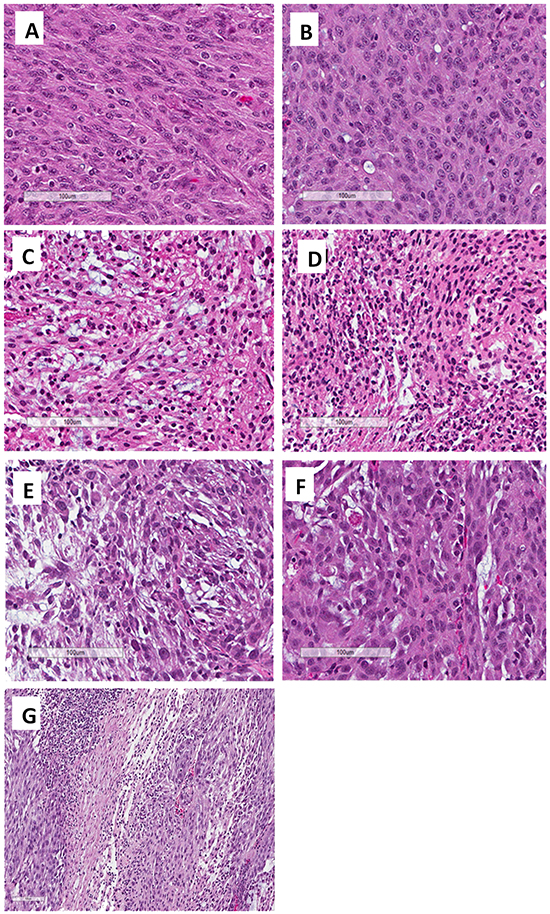 In a previous study, a human patient with advanced leiomyosarcoma was treated with an intra-tumoral injection of Clostridium novyi (C. novyi-NT) spores which reduced the tumor within and surrounding the bone [31], indicating the clinical potential of bacterial therapy of sarcoma. Since S. typhimurium A1-R is a facultative anaerobe, unlike C. novyi-NT which is an obligate anaerobe, it may have more broad application for cancer therapy. S. typhimurium A1-R can greatly potentiate cytotoxic chemotherapy [20]. S. typhimurium A1-R was recently shown to potentiate DOX in a PDOX model of high-grade undifferentiated soft-tissue sarcoma from a striated muscle [25].

In a Phase I clinical trial of patients with metastatic melanoma and renal carcinoma, the S. typhimurium strain tested (VNP20009), attenuated by msbB and purI mutations, was safely administered to patients [32]. The results of the present study suggest S. typhimurium A1-R is a candidate for clinical trial to treat DOX-resistant FDCS.

The findings of the present study are of particular importance since it demonstrates that S. typhimurium A1-R is effective in the PDOX model of FDCS established from a patient who failed DOX therapy and whose PDOX is DOX-resistant.

Athymic nu/nu nude mice (AntiCancer Inc., San Diego, CA), 4-6 weeks old, were used in this study. All animal studies were conducted with an AntiCancer Institutional Animal Care and Use Committee (IACUC)-protocol specifically approved for this study and in accordance with the principals and procedures outlined in the National Institute of Health Guide for the Care and Use of Animals under Assurance Number A3873-1. In order to minimize any suffering of the animals, the use of anesthesia and analgesics were used for all surgical experiments. Animals were anesthetized by subcutaneous injection of a 0.02 ml solution of 20 mg/kg ketamine, 15.2 mg xylazine, and 0.48 mg/kg acepromazine maleate. The response of animals during surgery was monitored to ensure adequate depth of anesthesia. The animals were observed on a daily basis and humanely sacrificed by CO2 inhalation when they met the following humane endpoint criteria: severe tumor burden (more than 20 mm in diameter), prostration, significant body weight loss, difficulty breathing, rotational motion and body temperature drop. Animals were housed in a barrier facility on a high efficiency particulate arrestance (HEPA)-filtered rack under standard conditions of 12-hour light/dark cycles. The animals were fed an autoclaved laboratory rodent diet [25].

A female patient diagnosed with a recurrent extranodal FDCS of the left lower extremity underwent surgical resection. She previously received adjuvant radiotherapy to the left lower extremity following resection of the primary tumor in 2014 and four cycles of chemotherapy with DOX and CTX for her recurrent disease. Chemotherapy was discontinued in April of 2015 due to medical co-morbidities and her inability to tolerate therapy. Surgical resection of the recurrent extra-nodal left lower extremity FDCS was performed by FCE on July 15, 2015. Written informed consent was obtained from the patient as part of a UCLA Institutional Review Board (IRB #10-001857)-approved protocol [25].

A fresh sample of the FDCS of the patient was obtained and transported immediately to the laboratory at AntiCancer, Inc., on wet ice. The sample was cut into 5-mm fragments and implanted subcutaneously in nude mice. After three weeks, the subcutaneously-implanted tumors grew to more than 10 mm in diameter. The subcutaneously-grown tumors were then harvested and cut into small fragments (3 mm3). After nude mice were anesthetized with the ketamine solution described above, a 5-mm skin incision was made on the right high thigh into the biceps femoris, which was split to make space for the sarcoma tissue fragment. A single tumor fragment was implanted orthotopically into the space to establish the PDOX model. The wound was closed with a 6-0 nylon suture (Ethilon, Ethicon, Inc., NJ, USA) [25].

Fresh tumor samples were fixed in 10% formalin and embedded in paraffin before sectioning and staining. Tissue sections (5 μm) were deparaffinized in xylene and rehydrated in an ethanol series. Hematoxylin and eosin (H&E) staining was performed according to standard protocol. Histological examination was performed with a BHS system microscope. Images were acquired with INFINITY ANALYZE software (Lumenera Corporation, Ottawa, Canada). Grade IV: no viable tumor is detectible [25].