Traditional Chinese herbal medicines have long been used to treat diseases including cancer, while effective chemical components have not been clearly elucidated [1–12]. SH003 is a mixed herbal extract containing Astragalus membranaceus (Am), Angelica gigas (Ag), and Trichosanthes Kirilowii Maximowicz (Tk), which is based on the principle of traditional Chinese medicine [12–16]. Each herbal component has been revealed to have anti-cancer effects, and our resent study has shown that a mixture of those components named SH003 was better than each component in anti-breast cancer effect [17–22].

Our previous study found that SH003 reduced CD31-stained vessel numbers in tumor tissues [13], which raised a question of whether SH003 directly affects tumor angiogenesis. Ag inhibits VEGF-induced angiogenesis, while Am induces angiogenesis [18, 34–36]. In addition, an anti-angiogenic effect of Tk is not reported. Accordingly, we hypothesized that SH003 might have a therapeutic usage in inhibiting tumor angiogenesis.

Our in vitro and in vivo studies demonstrate that SH003 inhibits VEGF-induced tumor angiogenesis by blocking VEGFR2-mediated signaling, which suggest that metronomic SH003 treatment could be useful for treating cancer.

We first investigated whether SH003 inhibits in vitro VEGF-dependent angiogenic processes in human endothelial cells such as proliferation, migration, invasion and tube formation, as those cellular aspects are basically investigated in the in vitro angiogenesis [33, 37–39]. To measure an effect of SH003 on the proliferation, human umbilical vascular endothelial cells (HUVECs) were treated with VEGF (50ng/ml) and different concentrations of SH003 (10, 20 or 50μg/ml) for 24 hours. While VEGF increased HUVEC proliferation rate as previously reported [38, 40], SH003 did not affect VEGF-induced HUVEC proliferation (Figure 1A). However, SH003 inhibited the number of VEGF-dependent migrated cells into the scratched region, when cells were treated with VEGF and SH003 for 9.5 hours (Figure 1B). Likewise, SH003 inhibited the HUVEC invasive ability induced by VEGF, as SH003 reduced invaded cell numbers in dose-dependent manner (Figure 1C). Moreover, SH003 inhibited VEGF-dependent tube formation on matrigels (Figure 1D). Therefore, our data suggest that SH003 effectively inhibits VEGF-dependent cell migration, invasion, and tube formation of the endothelial cells but not the proliferation. 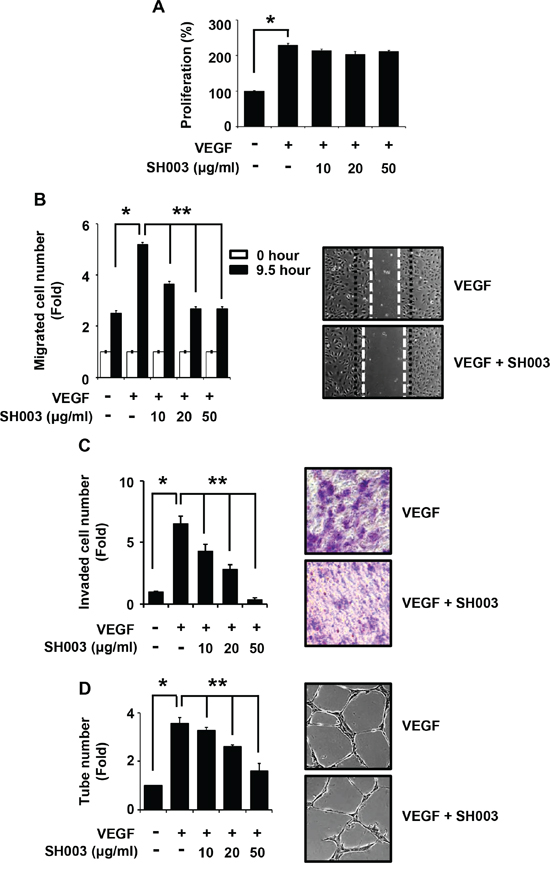 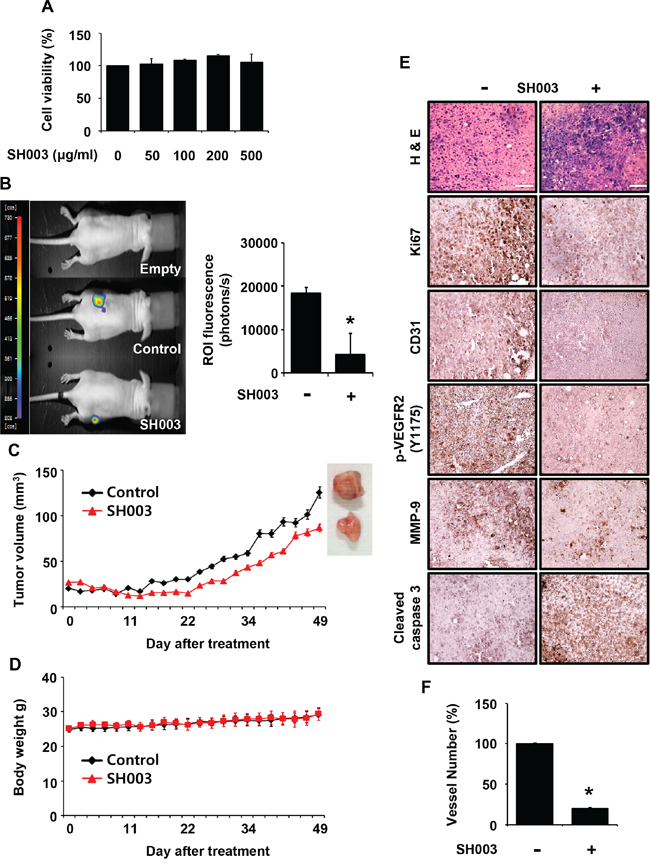 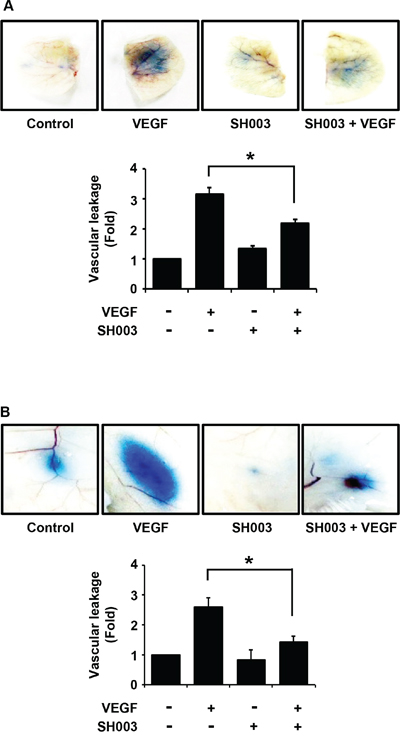 Next, we investigated SH003 effect on VEGF-dependent VEGFR2-mediated angiogenic signaling. SH003 inhibited VEGF-stimulated intracellular angiogenic signaling in dose-dependent manner, when HUVECs were pretreated with SH003 at different concentrations for 1 hour and then treated with VEGF for another 1 hour (Figure 4A). SH003 decreased VEGF-dependent VEGFR2 phosphorylation at T1175 and Y1214 residues, resulting in reduction of phosphorylation of FAK, SRC, ERK, AKT, and STAT3. Moreover, when we examined the time-course of SH003 inhibition of VEGF-induced VEGFR2-mediated signaling, SH003 strongly suppressed VEGF-dependent phosphorylation of VEGFR2, FAK, SRC, ERK, AKT, and STAT3 until 2 hours after VEGF stimulation (Figure 4B). Therefore, our data suggest that SH003 has anti-angiogenic effect via inhibiting VEGF-stimulated VEGFR2-mediated angiogenic signaling in the endothelial cells. 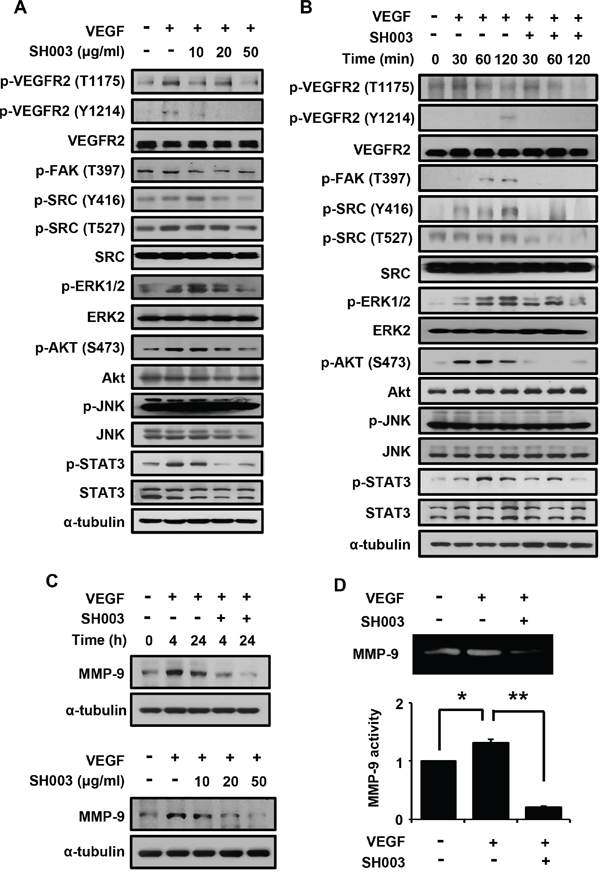 As SH003 inhibited VEGF-dependent VEGFR2 phosphorylation and its downstream signaling, we further analyzed whether SH003 inhibits an interaction of VEGF with VEGFR2. In our in vitro VEGF-VEGFR2 interaction assays, SH003 directly inhibited the interaction between VEGF and VEGFR2 (Figure 5A). Moreover, SH003 inhibited the interaction between VEGF and VEGFR1, while the inhibitions showed different IC50 values (Figure 5B). We recently confirmed that SH003 and its herbal components contained cucurbitacin D, decursin, formononetin, and nodakenin [13]. Therefore, we further examined whether those chemical compounds inhibits VEGF binding to VEGFR2. While different IC50 values were determined, each chemical compound inhibited VEGF binding to VEGFR2 (Figure 5C–5F). Those data suggest that SH003 and its compounds directly inhibit VEGF/VEGFR2 interaction. 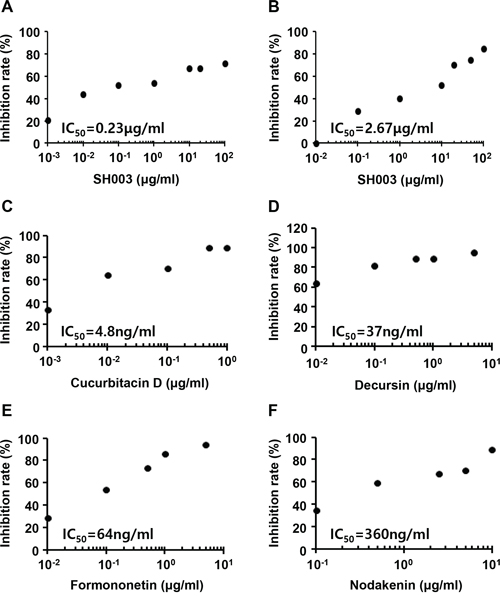 Our previous study showed that SH003 at higher concentrations caused breast cancer cell death by inhibiting STAT3-mediated signaling pathway [13]. SH003 concentrations tested in this study was lowered than those in the previous study [13], as we considered the metronomic approach to target tumor angiogenesis [48–50]. SH003 significantly inhibited VEGF-induced angiogenic processes in vitro including endothelial cell migration, invasion and capillary-like structure formation with no effect on the proliferation. In addition, SH003 at the concentration in this study did not affect pancreatic cancer cell proliferation. Thus, it guarantees that SH003 is not toxic but effective in the treatment of tumor angiogenesis. Moreover, our in vivo data showed that SH003 inhibited xenograft tumor growth as well as VEGF-stimulated vascular permeability. Therefore, our in vitro and in vivo data strongly suggest that SH003 has anti-angiogenic effect.

SH003 blocked VEGF-induced phosphorylation of VEGFR2 by directly interrupting VEGF binding to VEGFR2, resulting in the inhibition of downstream signaling. Moreover, we revealed that components in SH003 inhibited VEGF/VEGFR2 interaction. While decursin has been revealed to inhibit VEGFR2 phosphorylation [33], this study first shows that chemical components including decursin have abilities to block VEGF binding to VEGFR2. However, it still remains to be elucidated how many chemical components in SH003 interfere with the interaction between VEGF and VEGFR2, and how those components work together as a whole. Meanwhile, we found that SH003 inhibited VEGF binding to VEGFR1, although SH003 concentrations for the inhibition of VEGF/VEGF1 binding were higher than those for the inhibition of VEGF/VEGFR2 binding. Thus, SH003 effect on VEGF binding to either VEGFR2 or VEGFR1 suggests that SH003 could be applied to other vascular diseases beyond tumor angiogenesis.

This study first revealed that SH003 as the modified version of TCM inhibits tumor angiogenesis by directly inhibiting VEGF/VEGFR2 interaction. As the concentration of SH003 in anti-angiogenesis role was lower than that in anti-breast cancer function, we suggest that metronomic treatment of SH003 with particular anti-cancer agents could be effective to treat cancer development and metastasis, especially pancreatic cancer. Our ongoing studies include what effective molecules directly inhibits VEGFs/VEGFRs interactions, which will serve better knowledge for TCMs and help understanding vascular diseases.

SH003 was prepared as described previously [13]. In brief, each component was provided from Hanpoong Pharm and Foods Company (Jeonju, Korea) manufactured by the Good Manufacturing Product (GMP) and mixed as follows: 333g of Astragalus membranaceus, 333g of Angelica gigas, and 333g of Trichosanthes Kirilowii Maximowicz. The mixture was extracted by 30% ethanol and then stored at −80°C until use. Table 1 shows information on SH003 ingredients.

For proliferation assays, HUVECs were seeded at 5x103 cells in 96-well plates and then exposed to various concentrations of SH003 in the presence or absence of VEGF (50ng/ml). 5x103 Panc-28-luc cells were plated onto 96-well plates and treated with different concentrations of SH003. Cells were incubated for 24 or 72 hours and the cell viability was measured by MTT assay. For scratching assay, HUVECs were plated onto 12-well plates, scratched, and then washed with phosphate-buffered saline (PBS). After treatment with SH003 and VEGF (50ng/ml) for 9.5 hours, cells migrated toward the wound region were counted. For in vitro tube formation assay, 8x104 HUVECs were plated onto matrigel-coated 12-well plates, and treated with VEGF (50ng/ml) and various concentrations of SH003. After incubation for 9 hours, cells were fixed with 4% paraformaldehyde and capillary-like structures were measured. For invasion assay, 6x104 HUVECs were plated onto matrigel-coated 8μm pore size chambers. The upper chambers were filled with different concentrations of SH003 and the bottom well was added VEGF (50ng/ml) as the chemoattractant. After incubation for 5~7 days, the invaded cells were fixed with 4% paraformaldehyde and stained with 0.05% crystal violet. Crystal violet-positive invaded cells were counted. Each experiment was performed in triplicate and repeated three times.

All animal experiments were approved by Kyung Hee University Institutional Animal Care and Use Committee (KHU-IACUC). Five-week-old male Balb/c nude mice were purchased from Jungang Lab Animal Inc. (Seoul, Korea). For vascular leakage assays, SH003 (20μg) was injected into the ears or back skins in the presence or absence of VEGF (100ng) for 30 min. 150μl of 1% Evans blue dye was injected via tail vein to detect VEGF-induced vascular leakage. The stained tissues were removed and weighed. Evans blue was extracted from the tissues with 100μl of formamide solution for 24 hours at 55°C and measured spectrophotometrically at 610 nm. For xenograft tumor growth assay, Panc-28-luc cells (1x106) mixed with matrigels were subcutaneously implanted. For the in vivo bioluminescence imaging analyses, mice were randomly separated into three groups (background, control, and SH003). SH003 (2mg/kg) was orally administrated to SH003 group, while saline to control group. Mice were injected with 200μl D-luciferin using 25G syringes and incubated for 60 minutes. The image was captured in NightOWL LB 983 and analyzed using Indigo program (Berthold Technologies, Bad Wildbad, Germany). Body weights and tumor volumes were measured three times a week. Tumor volumes were determined by a formula: volume = length x width2 x 0.5. At the end of experiments, mice were euthanized and then tumors were isolated. For histological analyses, tumors were fixed with 4% paraformaldehyde and embedded in paraffin. Immunohistochemical staining for Ki-67, CD31, p-VEGFR2 (Y1175), and cleaved caspase-3 were carried out.

For gelatinolytic activities of samples, cells were treated with VEGF and SH003 for 24 hours and then subjected to zymography. After incubation, medium was collected and concentrated using Amicon Ultra-4 centrifugal filters (Millipore, New York, USA). The concentrated was mixed with non-reducing 5X sample buffer and electrophoresed in 8% SDS-PAGE gels containing 0.2% gelatin. Gels were run at 90V for 3 hours at 4°C and washed for 40 minutes in 2.5% Triton X-100 solution at room temperature. The gels were incubated for 20 hours at 37°C in 50mM Tris-HCl containing 0.15 M NaCl and 10 mM CaCl2 (pH 7.8). Next, the gels were stained for 1 hour in 0.05% Coomassie Brilliant Blue solution and de-stained until clear bands were visible.

The method was performed as described previously [51]. 96-well microplate (Thermo Fisher Scientific, Waltham, USA) was coated with 100μl of phosphate buffer saline (PBS) containing 500ng/ml of either VEGFR-1 or -2 ECD/Fc chimera (R&D Systems, Minneapolis, USA). The plate was sealed and incubated overnight at 4°C. After 3 times washes with 200μl of PBS containing 0.05% (v/v) Tween 20, the plate was blocked by adding 100μl of PBS with 1% (w/v) bovine serum albumin (BSA), and incubated for 2-3 hours at room temperature. The plate was washed 3 times and added with 100μl of diluted standards (biotinylated VEGF (btVEGF), R&D systems, Minneapolis, USA) or compounds (with 50ng/ml btVEGF) in PBS. After 2.5-3 hours incubation at room temperature, the plate was washed 3 times, and 100μl of streptavidin-HRP (R&D Systems, Minneapolis, USA) was diluted at 1:250 in blocking buffer. The plate was incubated for another 1 hour at room temperature, and then washed five times with 200μl of wash buffer with 100μl of substrate solution (BD Biosciences, Sandiego, USA). After 1-3 hours incubation at room temperature, the plate was then added with 50μl of stop solution (1M H3PO4) to each well. The signal measured at 450 nm using ELISA plate reader.

We thank Kwang Seok Kim at Korea Institute of Radiological and Medical Science (Seoul, Korea) for providing us with HUVECs. Panc-28-luc cells were a kind gift of Dr. Bharat B. Aggarwal at UT-MDA (Houston, TX, USA).

The authors have declared that the issue is under patent filings.

This work was supported by a grant from Korean Medicine R&D project of the Ministry Of Health and Welfare (B110043).

12. Hu J, Liu B. The basic theory, diagnostic, and therapeutic system of traditional Chinese medicine and the challenges they bring to statistics. Stat Med. 2012; 31:602-605.