Tumor-associated endothelial cells (TEC) directly facilitate tumor progression, but little is known about the mechanisms. We investigated the function of CD109 in TEC and its clinical significance in hepatocellular carcinoma (HCC). The correlation between CD109 expressed on tumor vessels and the prognosis after surgical resection of HCC was studied. The effect of human umbilical vein endothelial cells (HUVEC) with different CD109 expression on hepatoma cell proliferation, migration, and invasion was compared in co-culture assay. Associated key factors were screened by human cytokine antibody array and validated thereafter. HUVEC with different CD109 expression were co-implanted with HCCLM3 or HepG2 cells in nude mice to investigate the effect of CD109 expression on tumor growth and metastasis. Reduced expression of CD109 on tumor vessels was associated with large tumor size, microvascular invasion, and advanced tumor stage. CD109 was an independent risk factor for disease-free survival (P = 0.001) after curative resection of HCC. CD109 knockdown in HUVEC promoted hepatoma cell proliferation, migration, and invasion. Interleukin-8 (IL-8) was a key tumor-promoting factor secreted from CD109 knockdown HUVEC. CD109 knockdown upregulated IL-8 expression through activation of TGF-β/Akt/NF-κB pathway in HUVEC. Co-implantation with CD109 knockdown HUVEC accelerated tumor growth and metastasis in mice models. In conclusion, CD109 expression on tumor vessels is a potential prognostic marker for HCC, and its reduced expression on TEC promoted tumor progression by paracrine IL-8.

Hepatocellular carcinoma (HCC) is a health threatening disease worldwide, with a high mortality [1]. Tumor metastasis is a leading cause of mortality for HCC [2]. However, the underlying mechanism has not been fully understood [3]. HCC is generally a highly vascularized malignancy with mainly blood-borne metastasis. Tumor-associated endothelial cells (TEC) are involved in this process, which may favor HCC progression [4–7]. In addition to forming channels to provide oxygen and nutrients for tumor development [8], TEC directly facilitate tumor progression by paracrine tumor-promoting cytokines [9–13]. Recent studies suggested that the potential of vascular endothelial cells (EC) to directly regulate the biological behavior of tumors likely transcends their structural roles in tumor vessels [14, 15]. However, the regulatory mechanism of TEC function is not clear.

CD109 is a glycosyl phosphatidylinositol–anchored glycoprotein which belongs to the α2-macroglobulin/complement superfamily and is located on the plasma membrane of platelets, activated T cells, and EC [16, 17]. Though expressed on several types of tumor cells [18], CD109 may be a potential TEC marker [19]. It was reported that CD109 was expressed on a small proportion of circulating TEC, which was used to predict the efficacy of anti-angiogenesis drugs in glioblastoma patients [20, 21]. However, CD109 could not discriminate tumor-derived circulating EC from normal circulating EC [22]. The role of CD109 in EC and its clinical significance in HCC patients have not been reported.

In this study, we aimed at clarifying whether CD109 was specifically expressed on TEC in HCC tissues. Furthermore, we investigated the correlation between CD109 expression on tumor vessels and the prognosis after curative resection of HCC. In vitro and in vivo experiments using human umbilical vein endothelial cells (HUVEC) were performed to study the effects of different CD109 expression on tumor growth and metastasis. 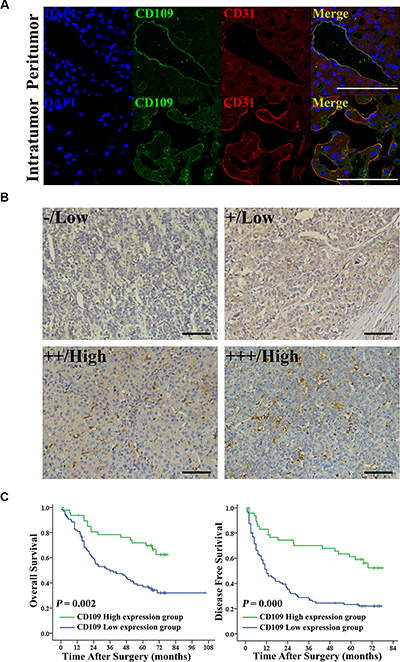 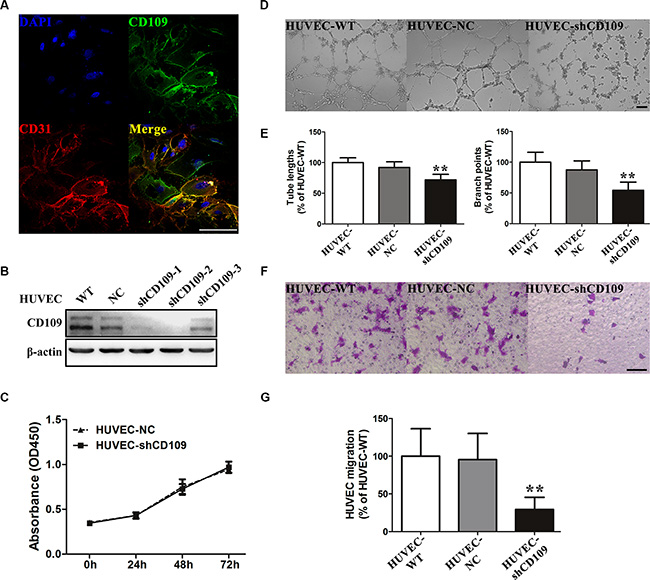 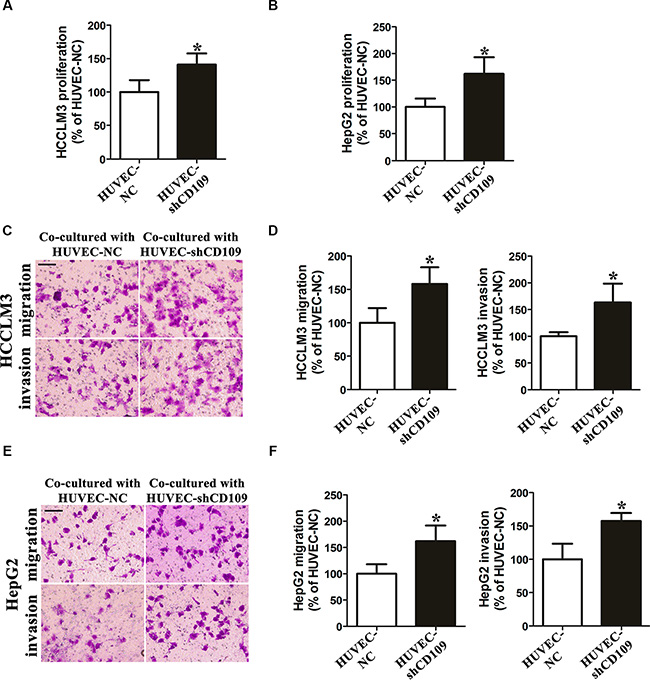 Human cytokine antibody array was used to screen the key tumor-promoting factor in the conditioned media (CM) of HUVEC. Elevated levels of four cytokines were identified (Figure 4). We selected IL-8 for validation. qRT-PCR showed that IL-8 mRNA expression increased in HUVEC-shCD109 (Figure 4B). ELISA also confirmed that the level of IL-8 was higher in the CM of HUVEC-shCD109 compared with that of HUVEC-NC (Figure 4C). IL-8 neutralizing antibody was used to verify the key role of IL-8. Neutralization of IL-8 resulted in a partial but significant inhibition of HUVEC-shCD109–mediated promotion of tumor cell migration and invasion (Figure 4D–4F; Supplementary Figure S3A); however, it had limited effect on hepatoma cells proliferations (Supplementary Figure S3B). 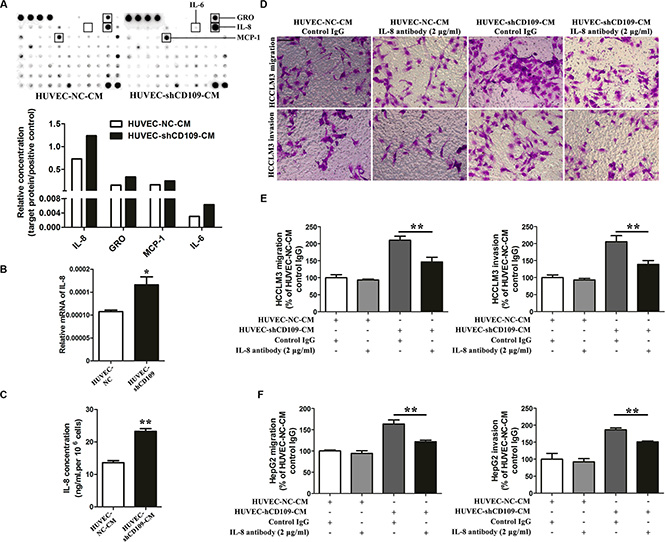 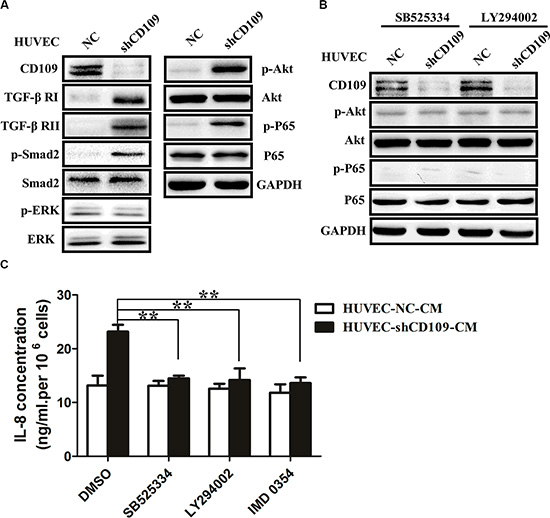 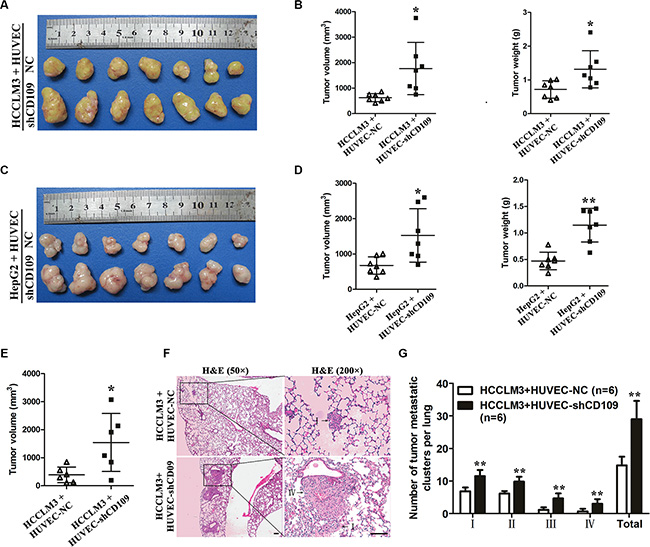 In the present study, we found that CD109 knockdown inhibited tube-forming capability of HUVEC, but significantly promoted tumor growth and metastasis in a paracrine manner. Our results supported the notion that the paracrine tumor-promoting effects of TEC may surpass its passive role in tumor angiogenesis [14, 15]. As dysfunctional EC, TEC secreted a wide range of growth factors and cytokines to promote tumor progression [14]. Franses et al. revealed that Perlecan knockdown in EC significantly increased IL-6 secretion which accelerated the invasiveness of tumor cells [15]. A recent study showed that AIP1-deficient EC induced epithelial–mesenchymal transition (EMT) of tumor cells by the secretion TGF-β2 [13]. In the present study, we first verified that the tumor-promoting effects of CD109 knockdown in HUVEC were mainly mediated by paracrine IL-8. IL-8, which is a negative prognostic marker for HCC [30, 31], promotes tumor angiogenesis and metastasis [32]. As is reported, IL-8 could be secreted from both tumor cells and certain stromal cells [33, 34]. The upregulation of IL-8 in CD109 knockdown HUVEC suggests that TEC may be an important source of IL-8 in HCC microenvironment. A previous study also showed that TEC with Bcl-2 overexpression in head and neck cancer patients promoted tumor cell proliferation and invasion by paracrine IL-8 [9]. We postulated that IL-8 secreted by TEC may facilitate the transendothelial migration of tumor cells.

As a co-receptor of TGF-β, CD109 inhibited TGF-β pathway through TGF-β receptors internalization and degradation in keratinocytes [35–37]. In the present study, we first revealed that CD109 knockdown significantly increased the TGF-β receptors expression, and then constitutively activated the TGF-β pathway and its downstream Smad-dependent and Smad-independent PI3K/Akt/NF-κB pathway in HUVEC. We further verified that CD109 knockdown upregulated IL-8 expression through activation of TGF-β/Akt/NF-κB pathway in HUVEC. These results were consistent with previous studies showing that activation of TGF-β, Akt, and NF-κB pathways upregulated the IL-8 expression in EC [38–40].

In conclusion, CD109 expression on tumor vessels serves as a prognostic marker for HCC patients after curative resection. Suppressing tumor-promoting cytokines secretion from TEC may have potential clinical value in the prevention of HCC metastasis.

From March 2004 to December 2006, archived specimens for tissue microarray construction from 142 consecutive patients who underwent curative resection for HCC by the same surgical team in our institute (Liver Cancer Institute, Fudan University) were collected. None of the patients received any anti-cancer therapy before surgery. The criteria for curative resection were defined as macroscopically complete removal of the tumor as described previously [41]. Tumor stage was determined according to the 7th edition of AJCC/UICC TNM classification system [42]. Tumor differentiation was graded by the Edmondson grading system. Follow-up procedures and postoperative treatment modalities were carried out according to a uniform guideline as described in our previous study [41]. The median follow-up period was 39.0 months (range, 1.5–95.0). Disease-free survival or overall survival was defined as the interval between the date of surgery and the date of recurrence or death; data were censored on the date of last follow-up for patients without recurrence or death. This study was approved by the Zhongshan Hospital Research Ethics Committee and informed consent was obtained from each patient according to the committee’s regulations.

For permanent inhibition of CD109 expression in HUVEC, we constructed recombinant lentivirus vectors containing small hairpin RNA (shRNA) targeting human CD109. These vectors and the negative control vector were transfected into HEK-293T cells using Lipofectamine 2000 transfection reagent (Invitrogen, Carlsbad, CA, USA). The vectors used for CD109 knockdown were U6-MCS-ubiquitin-Cherry-IRES-puromycin (Genechem, Shanghai, China). HUVEC were then transfected with lentivirus following the manufacturer’s instructions, and WB was used to validate the efficiency of CD109 knockdown. The most effective oligonucleotides for CD109 (5′-GACACUUACUCUUCCAUCA-3′, sense) that almost completely silenced its expression were selected for the study.

Collection of conditioned media of HUVEC

As previously described [11], CM was collected from confluent HUVEC by 24 h of culture in serum-free EBM-2. The same medium was incubated for 24 h without HUVEC to serve as basal medium. Cells and debris were removed by centrifugation at 3000 rpm for 20 min at 4°C. CM were then filtered through 0.22-μm filters and stored at −80°C for further use. The protein concentration of the CM was measured by bicinchoninic acid protein assay (Beyotime Biotechnology, Shanghai, China). HUVEC were pre-treated with SB525334 (1 μM; Selleckchem, Houston, TX, USA), LY294002 (20 μM; Cell Signaling Technology, USA), IMD 0354 (10 μM; Selleckchem, Houston, TX, USA), or DMSO (0.1%; Sigma-Aldrich, St. Louis, MO, USA) for 12 h, and then incubated in EBM-2 for 24 h to collect CM.

The amounts of secreted cytokines were compared between HUVEC with and without CD109 knockdown using C-Series Human Cytokine Antibody Array C5 for 80 human cytokines (RayBiotech, Norcross, GA, USA) as directed by the manufacturer. The concentration of IL-8 in the CM of HUVEC was detected by ELISA (Anogen, YES Biotech, Ontario, Canada) according to the manufacturer’s instructions and normalized by volume and cell number. To validate the role of IL-8, 2 μg/mL neutralizing antibody of IL-8 (R&D Systems, Wiesbaden, Germany) was added to the CM to neutralize the IL-8. The same concentration of isotype control immunoglobulin G (IgG) antibody (R&D Systems, Wiesbaden, Germany) was used as control.

RNA isolation and qRT-PCR procedures have been described previously [43]. The primers for amplification of human genes were as follows: CD109, forward 5′-CCTGTGACCTTTGCAGTGATGT-3′ and reverse 5′-GAGTGATGATGGGAGCCTGAA-3′; IL-8, forward 5′-CAGCCTTCCTGATTTCTGC-3′ and reverse 5′-GGGTGGAAAGGTTTGGAGTA-3′; and glyceraldehyde-3-phosphate dehydrogenase (GAPDH), forward 5′-TGACTTCAACAGCGACACCCA-3′ and reverse 5′-CACCCTGTTGCTGTAGCCAAA-3′. All samples were performed in triplicate three times and GAPDH values were used to normalize gene expression.

Procedures are described elsewhere [43]. Primary antibodies were listed in the Supplementary Table S3.

Procedures are described in our previous study [43]. Primary antibodies were listed in the Supplementary Table S3.

Approximately 5 × 106 HCCLM3 or HepG2 cells mixed with the same number of HUVEC with or without CD109 knockdown were rinsed twice with PBS to remove serum and trypsin after harvesting, re-suspended in serum-free Dulbecco’s modified Eagle’s medium and injected subcutaneously into the right front flanks of the nude mice (seven in each group, total of four groups). After 4 weeks, the mice were killed under anesthesia and tumor samples were dissected. Tumor volumes (largest diameter × perpendicular height2/2) and weights were measured. Similarly, to observe differences in lung metastasis, 2 × 106 HCCLM3 cells and the same number of HUVEC with or without CD109 knockdown were re-suspended in 40 μL serum-free Dulbecco’s modified Eagle’s medium/Matrigel (1:1; BD Biosciences, San Jose, CA, USA) and orthotopically injected into the left hepatic lobe of each mouse (six in each group, total of two groups). After 6 weeks, mice were sacrificed, tumor volumes were measured, and their lungs were dissected and fixed with 4% neutral buffered formalin. The total number of lung metastases was counted as described previously [46]. Briefly, the first of 10 of every 100 serial sections per lung were stained with hematoxylin and eosinand calculated independently by two pathologists in a blinded manner. The metastases were classified into four grades based on the number of tumor cells present at the maximal section for each metastatic lesion: grade I, ≤ 20 tumor cells; grade II, 20 to 50 tumor cells; grade III, 50 to 100 tumor cells; and grade IV, > 100 tumor cells.

The authors thank the participating patients for the source of clinical tissue samples and also thank Ke Qiao from the Key Laboratory of Medical Molecular Virology, Ministry of Education and Public Health, Shanghai Medical School, Fudan University, for technical assistance in confocal microscopy.