Hepatocellular carcinoma (HCC) is the fifth most common cancer in the world [1] and ranks third among the most lethal cancers worldwide [2]. HCC is an aggressive cancer with a high mortality rate and many cases were diagnosed at a late stage when curative therapies are not easily to obtain [3]. Chemotherapy with several cytotoxic agents, such as cisplatin, doxorubicin and 5-florouracil, are widely used to treat advanced HCC, but chemo-resistance is often observed in the majority of the patients [4, 5]. Thus, development of better chemotherapy strategies is urgently needed. 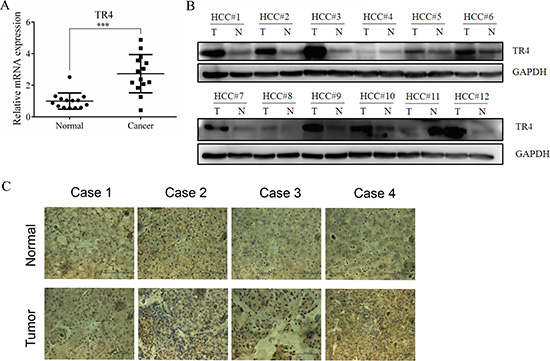 Together, results from Figure 1A–1C reveal that TR4 expression at both mRNA and protein levels is higher in HCC than surrounding normal liver cells, suggesting TR4 expression may be linked to the HCC development.

We first examined the TR4 expression in various HCC cell lines and found TR4 expression was higher in Hep3B and Huh7 cells and lower in LM3 and SNU387 cells (Figure 2A, 2B). We then studied differential expression of TR4 impacts on altering the cell viability upon chemotherapy. We found adding cisplatin, the current used chemotherapy drug to treat HCC [12], suppressed HCC cells using MTS assays (Figure 2B). Importantly, we found the cell viability was much higher in LM3 and SNU387 cells than in Huh7 and Hep3B cells (Figure 2C), suggesting higher TR4 expression in HCC cells may be able to increase cisplatin chemotherapy sensitivity to better suppress HCC cells. 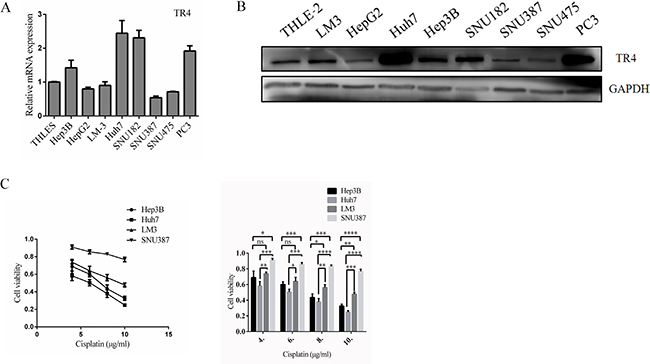 To further confirm the above conclusion, we first knocked-down TR4 expression via TR4-shRNA in Huh7 cells (Figure 3A, mRNA level and protein level), and then treated these cells with cisplatin and applied MTS assay to analyze the cytotoxicity of these cells. We found that Huh7 cells have less sensitivity to cisplatin treatment in the TR4 knocked-down (Huh7-shTR4) cells compared with the scrambled control (Huh7-scr) cells (Figure 3B, 3C). Similar results were obtained when we replaced Huh7-shTR4 cells with Hep3B-shTR4 cells (Figure 3D–3F). Similar results were obtained when we used another knocked-down TR4 plasimid (Supplementary Figure S1).

We then applied an opposite approach to overexpress TR4 via adding TR4-cDNA in LM3 and SNU387 cells (Figure 4A, mRNA level and protein level), and treated these cells with cisplatin and used MTS assay to analyze the cytotoxicity of these cells. The results revealed that adding TR4 increased LM3 cell sensitivity to cisplatin treatment (Figure 4B, 4C). Similar results were obtained when we replaced LM3-wpi TR4 cells with SNU387-wpi TR4 cells (Figure 4D–4F). 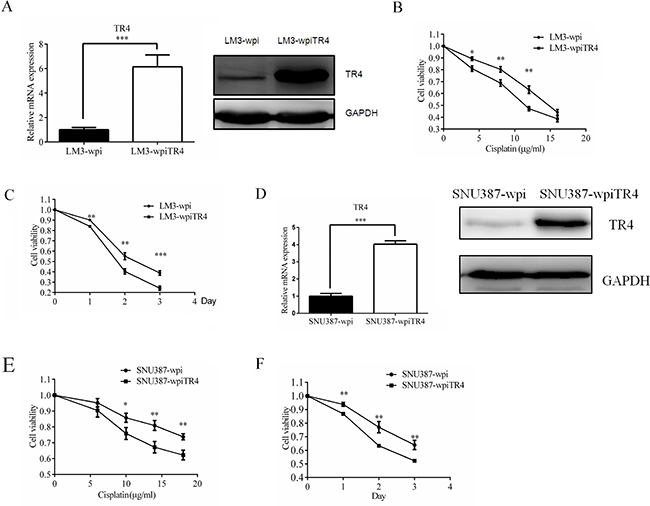 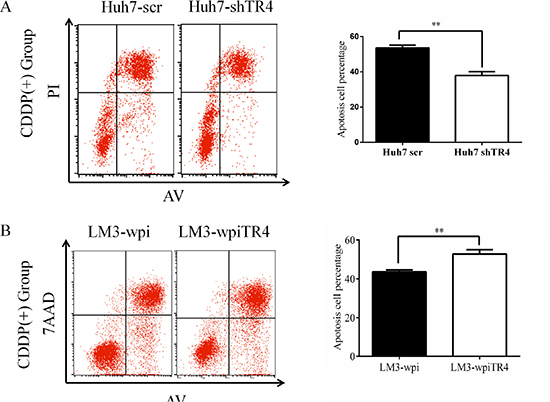 Overwhelming evidence indicates that the ATF3 gene can be induced rapidly by a variety of stress stimuli in different cell types possibly via altering cell apoptosis [13–21]. Germain et al. [22] also reported that cisplatin might suppress tumor growth via altering the ATF3 expression and knocked-down ATF3 might lead to attenuate the cisplatin-induced cytotoxicity in murine embryonic fibroblasts. 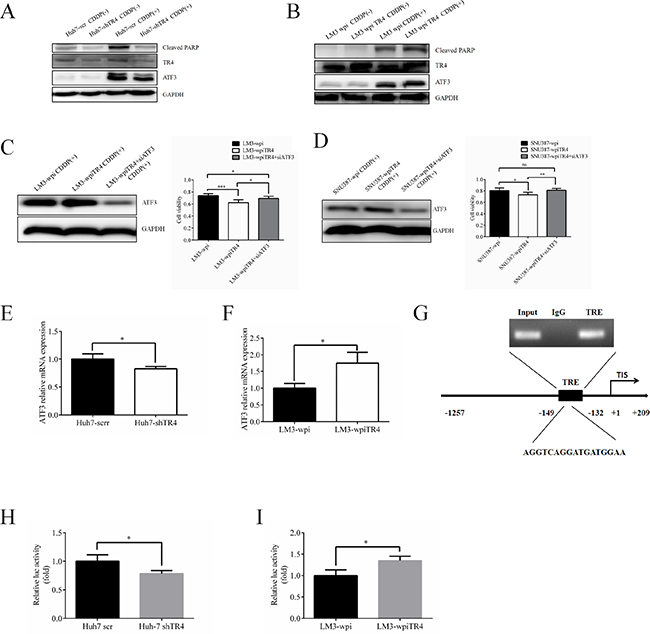 Since the major biological function comes from transcriptionally regulating downstream genes, we assumed TR4 could directly bind to the promoter region of ATF3 to influence its transcription. We first demonstrated that TR4 altered the ATF3 expression at the transcriptional level in Huh7 cells and LM3 cells (Figure 6E, 6F). We analyzed the sequence of ATF3 promoter region seeking for potential TR4-response-element (TR4RE) based on a previous publication [23] and identified a putative TR4RE with the sequence of 5′-AGGTCAGGATGATGGAA-3′. We then applied the ChIP assay and found TR4 could bind to this TR4RE in vivo (Figure 6G). Finally, we constructed the reporter gene with ATF3 promoter linked to luciferase reporter and assayed its transcriptional activity after altering the TR4 expression in Huh7 cells and LM3 cells (Figure 6H, 6I). The results proved the transcription activation of ATF3 was induced by TR4 (Figure 6E–6I).

To confirm all above in vitro cell lines data in vivo, we generated the subcutaneous xenograft HCC mouse models by transplanting either LM3-wpi or LM3–wpiTR4 cells into nude mice. The nude mice were divided into two groups: LM3-wpi tumor group and LM3-wpiTR4 group. Both groups were further divided into two subgroups: control subgroup and treatment subgroup with 0.5 mg/kg body weight cisplatin (as known as CDDP) i.p injection. As shown in Figure 7A, significant inhibition of HCC growth was found in the two cisplatin treatment subgroups, and TR4 overexpression in the cisplatin treatment subgroup had better suppression of tumor growth. 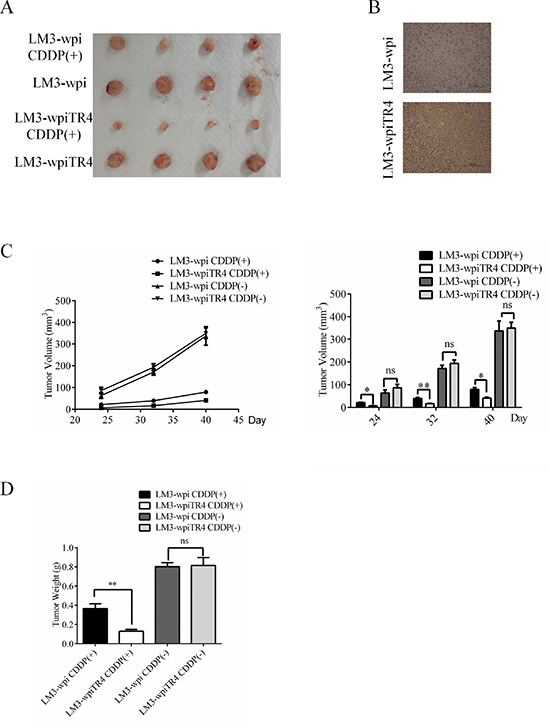 Figure 7: TR4 enhanced the effect of cisplatin in inhibiting the subcutaneous xenograft growth of Hepatocellular Carcinoma in nude mice. Each mouse was injected subcutaneously with either LM3-wpi or LM3-wpiTR4 cells (2 × 106 in 100 μl of medium) under the shoulder. Both groups were further divided into two subgroups (4 mice every group): control subgroup and treatment subgroup with cisplatin injection (1 mg/kg), every four days. The mice were euthanized after experiments, tumor tissues were excised and weighed. The original tumors (A), tumor tissues IHC of TR4 (B), tumor volumes (C), and tumor weights (D) were shown. The values presented are the means ± SD for each group (*P < 0.05, **P < 0.01, **P < 0.01, ns = not significant).

IHC staining confirmed the different TR4 expression in the two groups (Figure 7B), and the LM3-wpiTR4 subgroup with cisplatin injection clearly had better suppression of the LM3 tumors (Figure 7C–7D).

The efficacy of chemotherapy drugs varies greatly among individuals due to the heterogeneity of cancer biology, and many attempts have been developed to improve their chemo-sensitivity to better suppress the tumor growth [24–27]. For the HCC, it was reported that RYBP might be able to alter the HCC conventional chemotherapy via inducing HCC cells apoptosis [28]. Targeting NF-kappaB/miRNA-21/PTEN signaling pathway has also been suggested to alter the chemo-resistance [29].

Early studies indicated that TR4 might play cytoprotective roles [8, 10, 30–33] that could function through altering the cell survival signals including the TR4-Oct4-IL1Ra axis [11]. Here we found a reverse cytotoxic phenotype in HCC cells that might function through promoting cisplatin-mediated apoptosis, suggesting that the roles of TR4 in mediation of the tumor progression and chemotherapy efficacy is complex, and may depend on cell context or cytotoxicity inducers.

cisplatin has been used in the chemotherapy to suppress the HCC progression [34, 35]. Early studies indicated Cisplatin’s anticancer activity was associated with its DNA damaging effects and induction of cancer cell apoptosis [36, 37], that might involve altering various signal transduction pathways, including activating ATF3 signaling pathways [22, 38]. Here we found that TR4 may alter the cisplatin chemotherapy efficacy through activating ATF3. By activating ATF3, TR4 promoted HCC cell apoptosis under chemo-treatment. Using luciferase assay and ChIP assay, we demonstrated that TR4 might function as a transcription factor via binding to the ATF3-TR4RE sequence that is located on its 5' promoter region to regulate ATF3 expression in liver cells.

TR4 was first isolated as an orphan nuclear receptor without an identified ligand [6]. However, Xie et al. [23] found PPAR ligands/activators such as the PUFA metabolites, 15-HETE and 13-HODE, could trans-activate TR4, and some TZDs could also trans-activate TR4 to modulate its down-stream target CD36 activity during foam cell formation/atherosclerosis [39].

Interestingly, like other nuclear receptors that could also be trans-activated via phosphorylation, acetylation, or sumoylation [40], TR4 could also be modulated by the metformin that functions through activation of AMPK to phosphorylate TR4 [41]. Furthermore, androgen receptor co-activator ARA55 could also suppress TR4 transactivation by increasing acetylation in the DNA-binding domain of TR4 [42].

TR4-small hairpin RNA (shRNA) was cloned into pLKO.1 plasmid and TR4 gene was cloned in pWPI plasmid. Either scramble/vector control (pLKO.1-scramble/pWPI-vector) or shTR4/TR4 (pLKO.1-shTR4/pWPI-TR4) plasmids were transfected into 293T cells with a mixture of pKLO.1/pWPI, PAX2 (virus packaging plasmid) and pMD2G (envelope plasmid) (4:3:2 ratio) using Lipofectamine 2000 (Invitrogen). Lentiviral supernants were then collected to infect HCC cells. After viral infection, the media was replaced with normal culture media. The stable cells were selected and confirmed by quantative real-time PCR (qPCR) and western blot and then named as HCC-scramble/HCC-shTR4 and HCC-wpi/HCC-wpiTR4.

Cells were harvested and washed twice with cold PBS, then resuspended and lysed in RIPA buffer (1% NP-40, 0.5% sodium deoxycholate, 0.1% SDS, 10 ng/ml PMSF, 0.03% aprotinin, 1 μM sodium orthovanadate) at 4°C for 30 min. Lysates were centrifuged for 10 min at 14,000 × g and supernatants were stored at −80°C as whole cell extracts. Total protein concentrations were determined by Bradford assay. Proteins were separated on 12% SDS-PAGE gels and transferred to polyvinylidene difluoride membranes. Membranes were blocked with 5% BSA and incubated with the indicated primary antibodies. Corresponding horseradish peroxidase-conjugated secondary antibodies were used against each primary antibody. Proteins were detected using the chemiluminescent detection reagents.

Stable transfected cells (5 × 103) were seeded on a 96-well plate with 3 replicate wells and allowed to incubate for 48 hr with the treatment of various concentrations of cisplatin or incubated for 72 hr with the indicated concentration of cisplatin and assessed every 24 hr. After incubation, cell viability was assessed utilizing the tetrazolium-based MTS colorimetric assay (CellTiter 96 cell proliferation assay kit; Promega, Madison, WI, USA) according to the manufacturer’s instructions. All experiments were performed at least in triplicate on three separate occasions. Dose-response curves were plotted.

Animal studies were conducted using Female 5 week-old nude mice. Subcutaneous implantation was performed as previously described (23) where mice were injected subcutaneously with LM3-wpi or LM3-wpiTR4 cells. After a week, mice were randomized into two groups: cisplatin solution at the dose of 0.5 mg/kg in treatment group every four days nine times and DMSO control group in the same manner. The two perpendicular diameters (W and L) of tumors were recorded. The tumor volume (V) was calculated according to the formula: V = (W2 × L)/2. The mice were euthanized after experiments, and tumor tissues excised and weighed. All animal experiments were performed humanely in compliance with guidelines reviewed by the Animal Ethics Committee of the Biological Resource Centre of the Agency for Science, Technology and Research at the Sir Run-Run Shaw Hospital.

All results are expressed as mean ± standard deviation (SD). Statistical analysis of the difference between treated and untreated groups was performed with Student’s t-test. Values of P < 0.05 were considered as significant differences.