Esophageal cancer exhibits a common malignancy with a poor prognosis, ranking the 10th most common cancers and taking a toll of ~400,000 deaths in 2012 worldwide [1], and esophageal squamous cell carcinoma (ESCC), accounting for ~90% esophageal cancer, is the predominant histological subtype throughout the world [2]. The hugest burden of ESCC occurs in the “Asian esophageal cancer belt”, which extends from Caspian littoral of Iran, east to China, and north to Russia [3]. Our previous epidemiological study has shown an extremely high incidence of ESCC (74.47/100,000) in Nan’ao Island of Shantou, an isolated Chaoshan littoral region of southern China, from 1995 to 2004 [4], highlighting an urgent need for deeper understanding of its pathogenesis. In most cases, the development of ESCC is associated with esophageal squamous dysplasia. As a consequence, esophageal squamous dysplasia is regarded as the precursor lesion and risk factor for ESCC. A 13-year prospective follow-up study has demonstrated that patients with mild, moderate, or severe dysplasia have a risk of ESCC that is increased by a factor of 2.9, 9.8, or 28.3, respectively [5]. Hence, it is of great importance to explore the underlying mechanisms for the development of esophageal dysplasia.

The association between chronic inflammation and tumorigenesis was first proposed by Rudolf Virchow over a century ago, when he noticed the presence of inflammatory cells in neoplastic tissues [6]. Since then, accumulating evidence from preclinical and clinical studies has shown that recurrent and persistent chronic inflammation may be a causative factor for oncogenesis [7]. It has previously been estimated that chronic infection and related inflammation contributed to approximately 20% to 25% of all cancer cases worldwide [8].

Chronic inflammation-induced reactive oxygen and nitrogen species (RONS) could cause damage to important cellular components (e.g., DNA, proteins and lipids), which consequently contributes to malignant cell transformation [9]. According to our previous study regarding chronic inflammation-related DNA damage response (DDR) in gastric cardia carcinogenesis [10], the level of DDR was increased with the progression of precancerous lesions in human gastric cardia tissues. 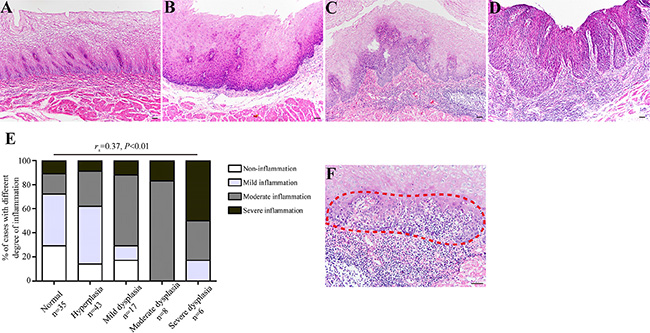 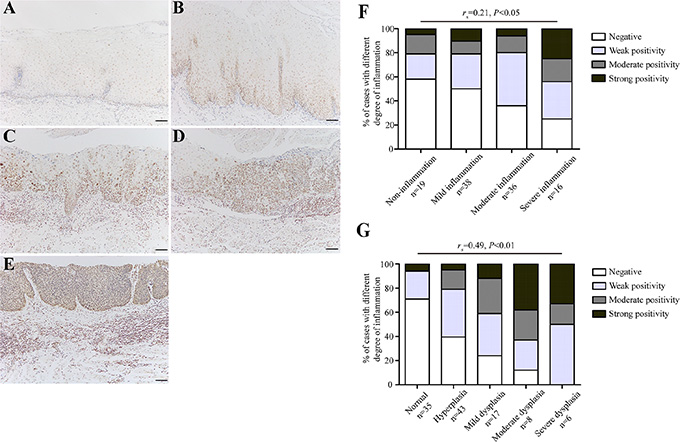 The level of DSBs increased with esophageal histological severity

We have confirmed that the accumulation of oxidative DNA damage in inflamed or dysplastic esophageal tissues. Additionally, we have previously reported that chronic inflammation-related DNA damage response is significantly increased in dysplastic tissues of human gastric cardia compared with that in normal gastric cardia tissues [10]. The phosphorylation of serine 139 in the C-terminal tail of the histone H2A variant, γH2AX, is a rapid and sensitive cellular response to the presence of DSBs [12], and its aggregation, in a way, is a predictor of genomic instability [13]. Hence, we attempted to evaluate the status of DSBs in esophageal tissues with different histological severity during esophageal carcinogenic process (Table 2). Importantly, immunostaining of γH2AX was evident in dysplastic epithelial cells, especially in severe dysplastic epithelial cells, whereas the immunoreactivity was almost absent in histologically normal tissues (Figure 3A–3D). Immunohistochemical analysis also confirmed this phenomenon with statistical significance (P < 0.001) (Figure 3E). Similarly, immunohistochemical analysis of γH2AX in tissues with different inflammation status demonstrated that the positive rates of γH2AX were significantly higher in samples affected by severe inflammation than that in tissues with milder inflammation (P < 0.01) (Figure 3F). 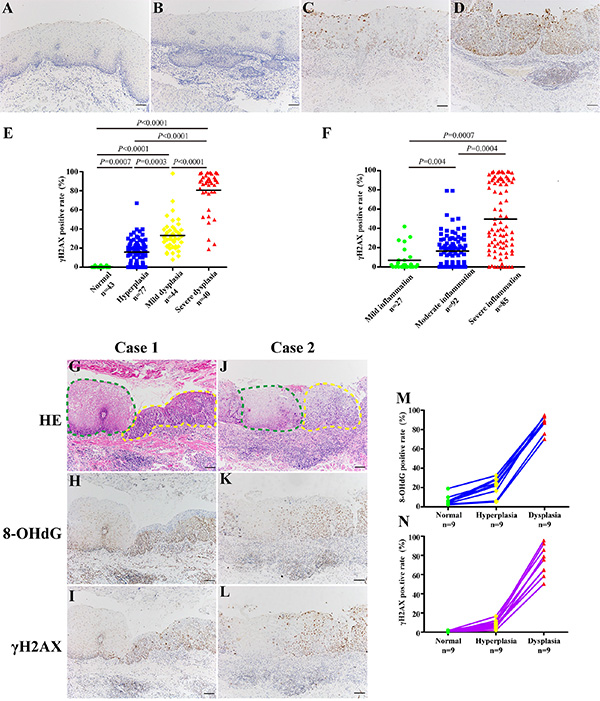 To rule out the potential influence of genetic background, we selected samples with transitional pathological changes from 9 ESCC patients to explore the DNA damage status during esophageal carcinogenic process. Not surprisingly, both the level of oxidative DNA damage and DSBs increased with esophageal histological severity (Figure 3G–3L). Immunohistochemical analysis revealed that immunostaining of 8-OHdG and γH2AX reached significantly higher positive rates than that in normal tissues (P < 0.05) (Figure 3M–3N). These data provide strong pathological evidence that DNA damage may play critical role in the initiation of esophageal malignant transformation.

Carcinogenesis is a long and multistep process including initiation (selection of a mutated cell), promotion (selective expansion of the initiated cell), and progression as a consequence of an imbalance between cell proliferation and cell death [20]. Oxidative damage to DNA by ROS is frequently postulated to give rise to mutations in tumor-related genes involved in essential cellular processes including proliferation, cell cycle checkpoints, apoptosis, and DNA repair. Our data show that oxidative DNA damage was positively correlated with esophageal precursor lesions, implying that the accumulation of oxidative DNA damage in esophageal epithelial cells, provided lacking of timely and accurate repair, may ultimately contribute to esophageal tumorigenesis. 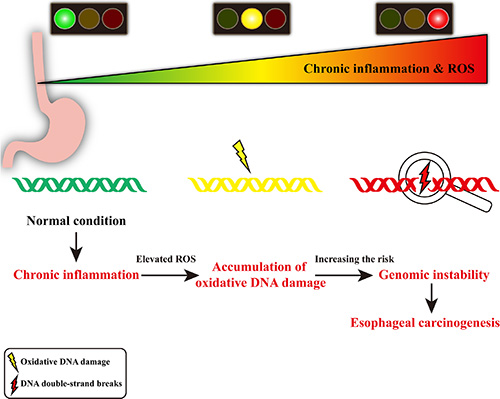 A total of 109 endoscopic biopsy specimens of esophagus from tumor-free individuals from Chaoshan littoral were collected for examination (i.e. relationship between chronic inflammation and precursor lesions, immunostaining for 8-OHdG).

A total of 204 esophageal tissue samples from ESCC patients with no prior radio- or chemotherapy were collected from Cancer Hospital of Shantou University Medical College from January 2008 to December 2014. For each patient, tumor-surrounding non-malignant tissues (within 2 cm from tumor) and distant non-malignant tissues (more than 5 cm away from tumor) were analyzed for DSBs status.

This study was approved by Ethics Committee of Shantou University Medical College, and informed consents were obtained from patients or their families.

Immunohistochemistry was performed to confirm the presence of oxidative DNA damage and DNA damage response. Briefly, formalin-fixed, paraffin-embedded (FFPE) tissue blocks were sectioned at 4-μm thickness and then used to perform immunohistochemistry. Tissue sections were deparaffinized in xylene, then rehydrated through graded ethanol to water, and immersed in phosphate buffered saline (PBS). Subsequently, antigen retrieval was performed in a pressure cooker for 2 minutes at 125°C and endogenous peroxidase activity was quenched by 3% H2O2 in distilled water for 15 min. After three washes in PBS, sections were incubated overnight with anti-8-OHdG (mouse, dilution 1:300, Santa Cruz) and anti-γH2AX (mouse, dilution 1:600, Cell Signaling Technology) at 4°C in a humidified chamber followed by incubation for 30 min with goat anti-mouse/rabbit at 37°C. After washing, peroxidase substrate (DAB) was added, slides were washed in water and counterstained with hematoxylin. Slides were then washed, dehydrated and mounted using cover slips.

Images were captured using a Leica IM50 microscope at ×400, and five different fields for each index (8-OHdG and γH2AX) were selected in each sample. Due to the nuclear and cytoplasmic immunoreactivity of 8-OHdG, immunoreactivity was scored based on the percentage of positive epithelial cells (0: < 10%; 1: 11%–25%; 2: 26%–50%; 3: 51%–75%; 4: 76%–100%). The intensity was scored as negative (0), weak (1), moderate (2) and strong (3). The corresponding labeling index was computed as product of percentage of positive cells multiplied by immnostainin intensity with highest score of 12. The final evaluation of 8-OHdG expression was classified as four grades: score 0 for negative; score 1–4 for weak positivity; score 5–8 for moderate positivity; score 9–12 for strong positivity. For the quantification of γH2AX, the number of positive nuclei and total nuclei in images was counted and the corresponding immunostaining positive rates were computed as positive nuclei/total nuclei ×100%.

15. Balkwill F, Charles KA, Mantovani A. Smoldering and polarized inflammation in the initiation and promotion of malignant disease. Cancer Cell. 2005; 7:211–217.