Accurate markers and molecular mechanisms of stem cell dormancy and activation are poorly understood. In this study, the anti-cancer drug, 5-fluorouracil, was used to selectively kill proliferating cells of human bronchial epithelial (HBE) cell line. This method can enrich and purify stem cell population. The dormant versus active status of stem cells was determined by phosphorylation of RNAp II Ser2. The surviving stem cells were cultured to form stem cell spheres expressing stem cell markers and transplanted into nude mice to form a teratoma. The results demonstrated the properties of stem cells and potential for multi-directional differentiation. Bisulfite sequencing polymerase chain reaction showed that demethylation of the Sox2 promoter by 5-FU resulted in Sox2 expression in the dormant stem cells. This study shows that the dormancy and activation of HBE stem cells is closely related to epigenetic modification.

Adult stem cells in the body are generally in a state of dormancy or the G0 phase of the cell cycle. Stem cells can be activated to re-enter the cell cycle via stimulation by specific environmental or internal factors [1–3]. However, the underlying mechanism is relatively unclear. At present, studies on stem cell activation and dormancy are mainly focused on hematopoietic [4–7], melanocyte [2], epidermal [8, 9], and cancer stem cells [10–12]. Several theories have been proposed to explain the dormancy and activation mechanism of stem cells, including phosphorylation of RNA polymerase [13, 14], p27 gene regulation [15, 16], regulation of TGF-β/Smad pathway [17], cell dormancy based on autophagy, biochronometer theory, and insulin/Igf1 pathway. It is known that 5-FU concentrates stem cells and increases the proportion of cells in the G0 phase [18, 19, 20, 21]. We induced tracheal epithelium cells into tracheal epithelium stem cells using 5-FU in serum-free culture, which formed teratomas after transplantation into nude mice. The results of this study demonstrated a new method of inducing stem cells without gene transduction. This study also explored the relationship between the activation and dormancy of tracheal stem-like cells and epigenetic molecular mechanisms. 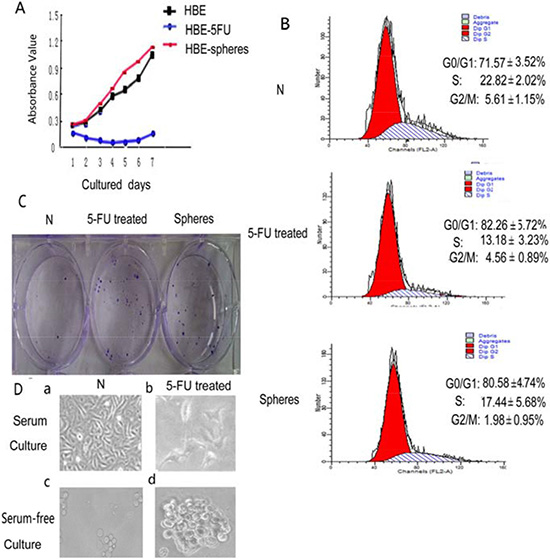 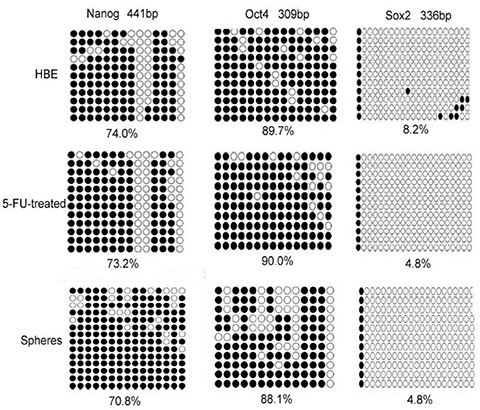 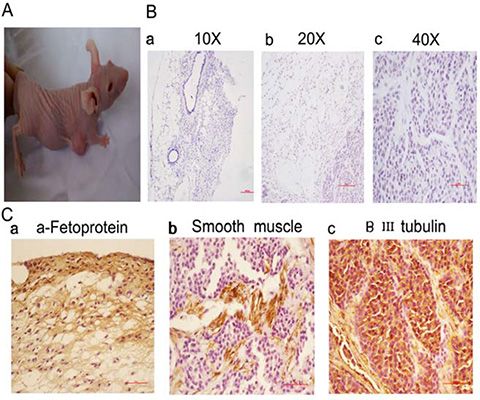 There was little Oct4, Nanog, or Sox2 expression in the parental HBE cells. However, after treatment with 5-FU at the IC50 of 40 μg/mL for 24 h, the expression of Oct4 (Figure 4Ab), Nanog (Figure 4Ac), and especially Sox2 (Figure 4Aa), increased, and ABCG2 also became positive (Figure 4B). The Western blot data showed trends for Oct4, Sox2 and Nanog that were similar to those observed by immunofluorescence (Figure 4C). 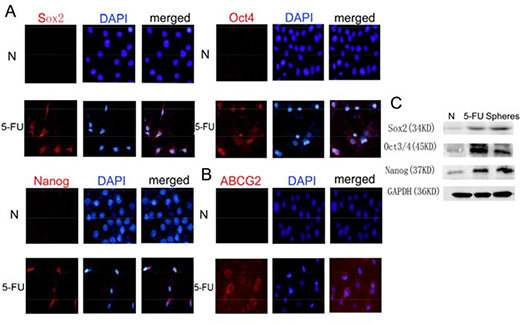 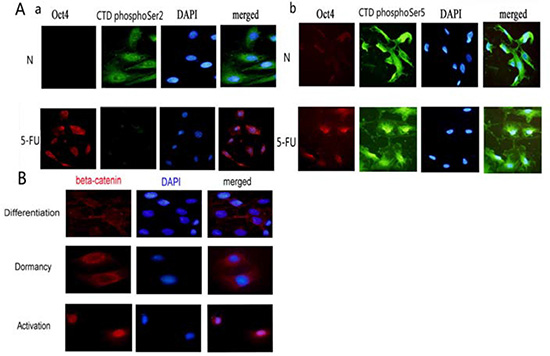 Some scholars have suggested that dormant stem cells are spherical, whereas differentiated cells have multiple apophyses. We believe that cell shape is an inadequate indicator of dormant or active status.

In this study, HBE cells were treated with 5-FU, resulting in a decrease in numbers of cells in the S phase and thus, cells in G0/G1 phase were concentrated. This phenomenon has been previously observed in several tumor cells from the gastrointestinal tract [25, 26], lung [27–34], and liver [35]. Treatment of HBE cells with 5-FU resulted in decrease in methylation of Sox2 DNA promoter from 8.4% to 4.8%, and the methylation island disappeared. The process involving demethylation of DNA promoter and activation of Sox2 gene is very similar to that observed in embryonic stem cell activation and dormancy [36–44]. DNA methylation correlates closely to gene silencing. Unmethylated DNA regions are associated with gene activation.

HBE cells treated with 5-FU in serum-free culture assumed a spherical shape instead of an adherent culture. Thereafter, these cells formed a teratoma when transplanted into nude mice. The tumor was positive for ectodermal marker, β III-tubulin; mesodermal marker Smooth muscle; and endodermal marker α-Fetoprotein. HBE cells can develop into pseudostratified ciliated columnar cells in serum and 3-dimensional culture, and purified stem cells can be obtained after treatment. Further, stem cells can be purified from cancer cell lines, including those of breast cancer, lung cancer, and oral cancer. This study showed that adult stem cells could be obtained from 5-FU and serum-free culture in vitro.

(2) 5-FU can cause Sox2 DNA promoter demethylation, which in turn reactivates tracheal stem cells from dormancy to the active state.

HBE variability was assessed using the MTT assay. Approximately 5 × 103 cells/well were seeded into 96-well culture plates and incubated under normal culture conditions for 12, 24, 48 and 72 h. The cells were then incubated with 20 μL MTT (10 mg/mL) for 4 h at 37°C, and 200 μL DMSO was added to solubilize the formazan product for 20 min at room temperature. The optical density (OD) was determined using a spectrophotometer (Bio-800, Bio-Rad, USA) at a wavelength of 570 nm.

The cell cycle was assayed by measuring DNA fragment staining with propidium iodide (PI). In brief, HBE cells, 5-FU treated cells and sphere cells were harvested and washed twice with phosphate-buffered saline (PBS) and fixed in ice-cold 70% ethanol at 4°C overnight. Ethanol-fixed cells were centrifuged and washed once with PBS. The cell pellet was then suspended in 0.1 mL RNaseA (5 mg/mL) and incubated in a 37°C shaker for 30 min. Then, the cells were stained with a propidium iodide (50 μg/mL) and incubated in the dark for 30 min at 37°C. In total, 10, 000 cells were harvested. The cells were analyzed immediately by exciting PI at 488 nm and measuring the emission at 580 nm using a BD canto II flow cytometer (BD Biosciences, San Jose, CA, USA) with Cell Quest 3.0 software.

HBE cells were incubated on ice for 20 min in 50 μL of RIPA buffer supplemented with 1 mM PMSF, 1 μg/mL leupeptin, 1 mM β-glycerophosphate, 2.5 mM sodium pyrophosphate, and 1 mM Na3VO4. Following centrifugation at 12, 000 × g for 20 min at 4°C, the supernatant was transferred to a new EP tube for determination of the concentration of the protein content. Next, 60μg protein from each sample was resolved on 10% sodium dodecyl sulfate (SDS) polyacrylamide gels and transferred to polyvinylidene fluoride (PVDF) membranes. Membranes were then blocked in TBST solution containing 4% skim milk for 2 h at room temperature. After washing, the membrane was incubated overnight at 4°C with specific primary antibodies at appropriate concentration in 1% BSA solution. After washing the membrane three times for 15 min with TBST solution, the membrane was further incubated with appropriate HRP-conjugated secondary antibodies in TBST solution for 2 h at room temperature. The membrane was washed three times for 15 min by TBST solution and incubated with ECL solution for 1 min. Protein bands were visualized using the ECL chemiluminescence method. Relative protein levels were quantified using GAPDH as loading control.

This study was performed with the approval of the Care and Use of Laboratory Animals Committee of China Medical University, Shenyang, China, and all of the experiments were performed according to the National Institutes of Health Guide for the Care and Use of Laboratory Animals. Male BALB/C nude mice (aged 6–7 weeks) were divided into HBE, serum-free cultured 5-FU-treated HBE cell spheres (n = 3 per group) and received 3 × 105 cells by intraperitoneal injection (i.p.) at the lower left quadrant before they were euthanized at 5 weeks after transplantation. The resulting tumors were measured using a Vernier caliper, weighed, and photographed. Tumor samples were removed and fixed in 10% formaldehyde, and were embedded in paraffin for subsequent hematoxylin and eosin (HE) and immunohistochemical staining to assess tumor pathology.

Nude mice tumor specimens were fixed with 10% neutral formalin and embedded in paraffin, and 4-μm-thick sections were prepared. Immunostaining was performed using the avidin–biotin–peroxidase complex method (Ultrasensitive™, MaiXin, Fuzhou, China). Paraffin sections were dewaxed in xylene and rehydrated in graded alcohols. Antigen retrieval was performed by heating the sections for 1.5 min in 0.01 mol/L citrate buffer, pH 6.0. Non-specific staining was reduced by incubation in blocking buffer containing goat serum (SP KIT-B1; Maixin-Bio, Fuzhou, China) for 30 min. Then, the sections were incubated with α-Fetoprotein, Smooth muscle, βIII tubulin antibody overnight at 4°C. The following day, the sections were incubated with appropriate secondary antibodies for 30 min. The reaction was visualized using DAB (DAB-0031; Maixin-Bio) plus chromogen. Specimens were examined using a BX50 microscope (Olympus). For serum controls, 1% BSA in PBS was used in place of the primary antibody as a negative control.

The authors would like to thank Xin-shan Jia for critical suggestion and Fang Li for English revision. The authors declare no Conflicts of Interest. This work was supported by the National Natural Science Foundation of China Grant no. 81370100.