Nasopharyngeal carcinoma (NPC) is a squamous cell carcinoma that originates from the epithelial lining of the nasopharynx and is endemic in southern China and Southeast Asia, where the prevalence is approximately 50 cases per 100,000 individuals. [1, 2] Radiotherapy (RT) is the primary treatment modality for NPC. [3] The introduction of intensity-modulated radiation therapy (IMRT) in recent years has greatly enhanced the locoregional control rate and leads to superior outcomes in NPC. The tumor-node-metastasis (TNM) staging system remains the most recognizable and commonly-used prognostic indicator for patients with NPC. [4] However, due to the heterogeneity of patient and tumor factors, even patients with identical classifications and clinical stages exhibit a variety of differing outcomes after treatment. [5] Thus, potential exists for the identification of novel prognostic factors that are directly or indirectly related to treatment outcome.

Among the various prognostic factors that have already been reported, cigarette smoking attracts attention due to its demonstrated relationships with NPC etiology, prognostication and EBV seropositivity. [10-12] Xu et al. [13] reported that cigarette smoke extract could induce EBV replication and promoted the EBV latent-to-lytic switch in vitro. Additionally, according to a 20-year follow-up study in Taiwan, heavy smokers maintained a higher EBV seropositivity rate than never smokers and light smokers and were proned to higher risk of nasopharyngeal carcinoma. [10]

Given the evidence above, we conducted a large-scale retrospective study to reevaluate the prognostic significance of cigarette smoking and baseline plasma EBV DNA in patients with NPC undergoing IMRT, and investigated the combined value of these factors for risk stratification and prognostication with the aim of improving the individualized treatment of patients with NPC receiving IMRT.

Table 1: Clinical characteristics of the 1501 patients with nasopharyngeal carcinoma

The proportions of light smokers and heavy smokers were 471/1501 (31.4%) versus 1030/1501 (68.6%). There was no significant difference in the distribution of histological types, chemotherapy strategies or N classification when the patients were stratified by cigarette smoking. However, significant differences were observed in terms of age, gender, T category, clinical stage and baseline plasma EBV DNA. 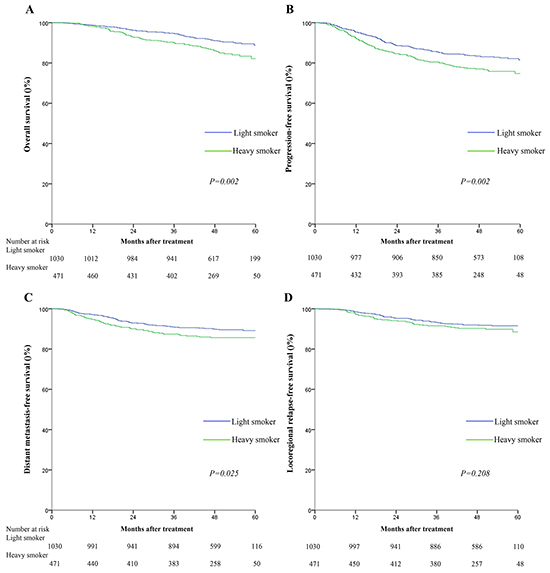 Figure 1: Kaplan-Meier survival curves for overall survival A. progression-free survival B. distant metastasis-free survival C. and locoregional relapse-free survival D. for the 1501 patients with NPC stratified as heavy smokers and light smokers. All categories are based on the 7th edition of the Union for International Cancer Control/American Joint Committee on Cancer staging system. Smoking index was calculated by multiplying cigarette packs per day and smoking time (years). The cutoff value for smoking index was≤6.5 pack-years. 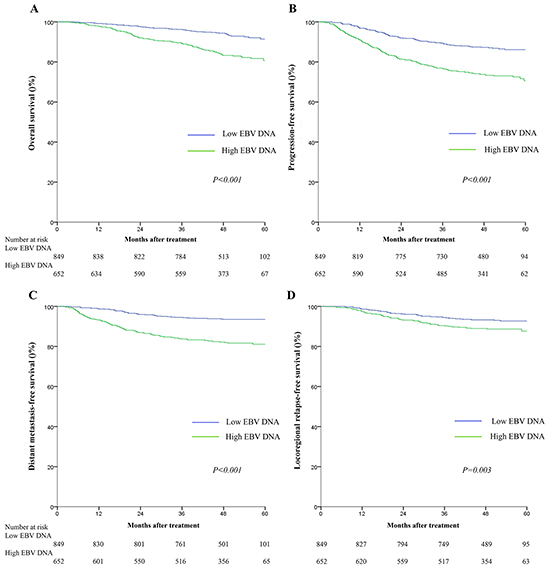 Figure 2: Kaplan-Meier survival curves for overall survival A. progression-free survival B. distant metastasis-free survival C. and locoregional relapse-free survival D. for the 1501 patients with NPC stratified as the high and low baseline plasma EBV groups. All categories are based on the 7th edition of the Union for International Cancer Control/American Joint Committee on Cancer staging system. The cutoff value for the baseline plasma EBV DNA load was≤4000 copies/mL. 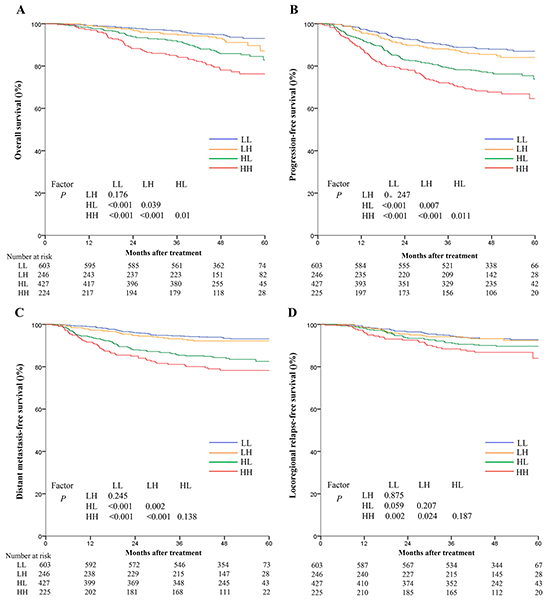 Table 4: Combined prognostic value of the cumulative effect of smoking and baseline plasma EBV DNA for OS, PFS, DMFS and LRFS in the 1501 patients with NPC undergoing IMRT

*The following parameters were included in the Cox proportional hazards model multivariate analysis with backward elimination: age (> 45 vs. ≤ 45 years), gender (female vs. male), T category (T3–4 vs. T1-2), N category (N2–3 vs. N0-1), chemotherapy (yes vs. no) and the combination of cumulative effect of smoking and baseline plasma EBV DNA.

Having witnessed the revolutionary changes that IMRT has provided in the treatment of NPC in recent decades, we consider it necessary to reevaluate the value and significance of existing prognostic factors. Cigarette smoking has already been reported to play an important role in EBV latent-to-lytic activation [13]; therefore, we sought to investigate the combined prognostic value of cigarette smoking and baseline plasma EBV DNA in patients with NPC undergoing IMRT. To the best of our knowledge, this is the first large population study to evaluate the combined prognostic value of these factors in an attempt to refine risk stratification and prognostication in NPC.

The prognostic significance of cigarette smoking has previously been investigated in NPC. Ouyang et al. [14] revealed that cigarette smoking was prognostic for poorer OS, PFS, DMFS and LRFS in NPC, with the risk increasing with the exposure to smoking, with cut-off points of 32 pack-years for OS and 22 pack-years for PFS. Chen et al. [12] reported that that smoking was prognostic for poorer outcomes in male patients, and patients with smoking index≤15.5 pack-years had better OS, PFS, DMFS and LRFS. Guo et al. [15] indicated smoking could increase the risk of locoregional recurrence in NPC. However, in our study, heavy smokers had poorer OS, PFS and DMFS, but not LRFS. This difference is probably due to the excellent local control rates (> 90%) achieved by the introduction of IMRT and the fact that distant metastasis, rather than local failure, is the predominant pattern of failure in the IMRT era. [16] On the other hand, the differences observed between this study and previous studies also reflect the necessity of reevaluating existing prognostic factors for NPC in patients undergoing IMRT.

In recent studies, baseline plasma EBV DNA was found to positively correlate with the tumor burden and was closely associated with TNM staging, survival, recurrence and prognosis. [17-19] Despite its wide clinical use, baseline plasma EBV DNA alone was far from adequate, considering the heterogeneity of patients with NPC. Here, we further explored the complementary role of cigarette smoking in combination with baseline plasma EBV DNA. Interestingly, cigarrete smoking correlated positively and complemented baseline EBV DNA to improve risk stratification and prognostication in NPC. We created a novel prognostic model, in which patients were divided into four risk groups. Significant differences in OS, PFS, LRFS and DMFS were observed between the four groups: patients in the LL group had better survival outcomes than both the LH group and HL group, and the HH group experienced the poorest survival outcomes. In particular, heavy smokers had a poorer prognosis than light smokers in the high EBV DNA group; however, a similar trend was not observed in the low EBV DNA group. These results were not unexpected. Xu et al. [13] reported that cigarette smoke extract promoted EBV replication in vitro and induced expression of immediate-early transcriptional activators, which subsequently increased the transcription of BFRF3 and gp350 in the lytic phase, which are responsible for the EBV latent-to-lytic switch. As cigarette smoking promotes EBV latent-to-lytic activation, these findings may help to explain our result that smoking status had more significant prognostic value in the high EBV DNA group than that in low EBV DNA group. In other words, cigarette smoking had more specific and peculiar prognostic value for poorer outcomes in patients with high EBV DNA, whereas the diverse outcomes of patients with low EBV DNA may be attributed to other unknown factors. Future studies are required to identify other potential prognostic factors for NPC. Other evidence also indicates that smoking exacerbates tissue hypoxia and leads to smoking-induced tissue hypoxia. [20] Also, inhalation of cigarette smoke reduced tumor control after RT in animal models, [21] which could lead to a poorer outcome in heavy smokers. However, the results of this study indicate cigarette smoking does not have significant prognostic value in patients with low baseline plasma EBV DNA. Future research is necessary to explore the associated mechanisms.

The major objective of this study was to reevaluate the prognostic value of both cigarette smoking and baseline plasma EBV DNA and investigate the combined prognostic value of these factors for risk stratification and prognostication in patients with NPC receiving IMRT. The improved prognostic ability offered by combining cigarette smoking and baseline plasma EBV DNA with the TNM staging system could enable more aggressive treatment protocols for patients with a poorer prognosis and conversely, allow patients with a better prognosis to undergo less intensive treatment strategies. According to the guidelines of the National Comprehensive Cancer Network (NCCN) version 1.2015, definitive RT of the nasopharynx and elective RT of the neck is recommend as the standard treatment regimen for stage I NPC, While for stage II and locoregionally-advanced NPC, CCRT with adjuvant chemotherapy was recommended as a category 2A evidence, and CCRT alone as a category 2B evidence. [22, 23] In addition, recently several multicentre randomised controlled trials have indicated that cisplatinum-based induction chemotherapy has been shown to improve disease-free survival and may be considered in locally advanced disease. [24] Based on this study, it is possible that current chemoradiotherapy may be not sufficient for patients with high baseline plasma EBV DNA who smoke heavily, even those with an early TNM classification. For patients in this risk stratification, additional NACT followed by CCRT may be an optimal choice. Moreover, patients with low baseline plasma EBV DNA who smoke lightly may not gain much benefit from neoadjuvant chemotherapy or adjuvant chemotherapy. Thus for this group of patients, CCRT protocols may be sufficient, especially for patients without lymphatic metastasis, which may avoid overtreatment and unnecessary side-effects. Further studies are required to identify a more reasonable systemic approach to improve the outcomes of patients in different risk stratifications.

The major limitation of this study is the fact it is a retrospective analysis of patients treated at a single cancer center in an NPC endemic area. Large scale, multi-institutional prospective studies are needed to confirm the findings of this research. Secondly, the smoking status of the patients at diagnosis was extracted from medical records, rather than using standardized questionnaires at enrollment.

All 1811 patients with newly-diagnosed, non-distant metastatic, histologically-proven NPC treated with IMRT at our institution between November 2009 and February 2012 were retrospectively reviewed. The patients recruited for the study completed a pretreatment evaluation, including physical examination, hematology and biochemistry profiles, quantitative analysis of baseline plasma EBV DNA by real-time quantitative polymerase chain reaction, magnetic resonance imaging (MRI) scan of nasopharynx and neck, chest radiography, abdominal sonography, and a single photon emission computed tomography (SPECT) whole-body bone scan; 29.2% (528/1811) of patients also underwent a (18)F-fluorodeoxyglucose (18F-FDG) positron emission tomography CT (PET/CT) examination. Before treatment, the following basic information was collected: age, sex, family history of NPC, smoking habits (including smoking status, packs of cigarette/day, years of smoking). Patients whose medical records were lacking data on either smoking habits or baseline plasma EBV DNA were excluded (n = 310). A total of 1501 patients were finally included in this study. All patients were restaged according to the 7th edition of the UICC/AJCC staging system. This study was approved by the Institution of the Sun Yat-Sen University Cancer Center (SYSUCC). The clinicopathological characteristics of the patients are summarized in Table 1 .

The nasopharyngeal and neck tumor volumes of all patients were treated using radical RT based on IMRT for the entire course. Target volumes were delineated slice-by-slice on treatment planning CT scans using an individualized delineation protocol that complies with International Commission on Radiation Units and Measurements reports 50 and 62. The prescribed doses were 66–72 Gy at 2.12–2.43 Gy/fraction to the planning target volume (PTV) of the primary gross tumor volume (GTVnx), 64–70 Gy/ 28-33 fractions to the PTV of the GTV of the involved lymph nodes (GTVnd), 60-63 Gy/ 28-33 fractions to the PTV of the high-risk clinical target volume (CTV1), and 54–56 Gy/ 28-33 fractions to the PTV of the low-risk clinical target volume (CTV2). All targets were treated simultaneously using the simultaneous integrated boost technique. Institutional guidelines recommended only IMRT for stage I and concurrent chemoradiotherapy ± neoadjuvant/adjuvant chemotherapy for stage II to IVB. In this study, Overall,1306/1501 (87.0%) patients received chemotherapy. Of the total 1116 patients with locally-advanced NPC, 1057/1116 (94.7%) received chemotherapy. Reasons for deviation from the guidelines included individual patient’s refusal, age, or organ dysfunction suggestive of intolerance to treatment. When possible, salvage treatments (intracavitary brachytherapy, surgery or chemotherapy) were provided for cases with documented relapse or persistent disease.