Objectives: The present study investigated the clinical implications of pretreatment carbohydrate antigen 125 (CA-125) levels and CA-125 normalization in patients with ovarian clear cell carcinoma (CCC), and it provides useful information for the improvement of monitoring strategies for this lethal disease.

Methods: The medical records of patients with ovarian CCC who had undergone primary staging surgery or cytoreductive surgery followed by systemic chemotherapy were retrospectively reviewed. A range of clinico-pathological parameters were collected and examined.

Conclusions: Pretreatment CA-125 levels are not very useful for predicting clinical outcome. CA-125 levels following treatment are a valid indicator for treatment monitoring. CA-125 normalization after the completion of cycle 1 of chemotherapy represents a distinct inflection point for decreased RFS and OS.

The World Health Organization has defined clear cell carcinoma (CCC) of the ovary as a distinct histological type since 1973 [1]. This tumor type accounts for 15% of all epithelial ovarian cancer (EOC) cases [2], and the incidence might be even higher among Asian women [3-5]. CCC is one of the most aggressive and malignant types of tumors, and it has a poorer clinical outcome than other types of EOC due to its resistance to platinum-based chemotherapy, particularly in patients with advanced or recurrent disease [2, 6-8]. The Gynecologic Cancer Intergroup (GCIG) initiated a meta-analysis in 2010 and demonstrated that the median overall survival (OS) for stage III/IV CCC was only 21.3 months [9]. The 5-year OS rate for patients with recurrent CCC was as low as 22.5%, and the mean OS was only 25.3 months [10], consistent with our previous studies [11]. CCC has a unique developmental pathway and possibly originates from endometriosis [4]. However, a management and efficacy monitoring strategy specifically for ovarian CCC has not been established, in part due to the relative rarity of this tumor type. Therefore, ovarian CCC is treated and monitored in the same way as other histological subtypes of EOC.

Carbohydrate antigen 125 (CA-125) is a glycoprotein antigen that is a predominantly used in the clinical setting to evaluate tumor response and to predict relapse in patients with EOC [12-16]. However, the prognostic value of CA-125 in patients with ovarian CCC has seldom been addressed in the literature [17-19], and the conclusions have been controversial. In the present study, we investigated the clinical implications of pre- and post-treatment serum CA-125 levels in patients with ovarian CCC to provide useful information for the improvement of monitoring strategies for this lethal disease.

A total of 375 women met the eligibility criteria during the study period and were included in this analysis, and 164 of these patients who developed recurrent or persistent disease after primary treatment were described previously [11]. Table 1 shows the demographic and clinico-pathological characteristics of the 375 women. The mean age at initial diagnosis was 50.8 years, and 191 of the cases (50.9%) were premenopausal. Ascites and EAOC were present in 139 (37.1%) and 132 (35.2%) patients, respectively. The FIGO staging was distributed as follows: 180 cases (45%) were stage I (Ia: 63; Ib: 4; Ic: 113), 43 cases (11.5%) were stage II (IIa: 9; IIb: 13; IIc: 21), 132 cases (35.2%) were stage III, and 20 cases (5.3%) were stage IV. Initial pelvic and para-aortic lymphadenectomy was performed in 259 patients (69.1%). Node involvement was present in 74 patients, including one woman who had a positive left supraclavicular lymph node and was exempted from lymphadenectomy. Thirty-eight patients (10.1%) had macroscopic residual disease (residual tumor > 1 cm) within the abdominopelvic cavity after the initial surgery. Platinum/taxane chemotherapy was performed on 264 patients (70.4%) as the front-line therapy, and the remaining 111 patients received conventional platinum-based regimens.

Table 2: The association between pretreatment CA-125 levels and clinico-pathologic characteristics for patients with CCC

Table 3: Risk factors related to EFS and OS for patients with ovarion CCC 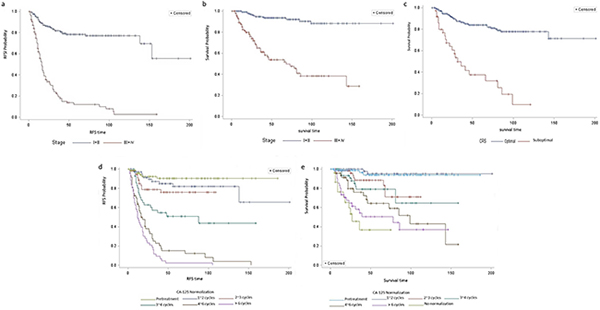 Table 4: The prognostic significance of CA-125 normalization in ovarian CCC 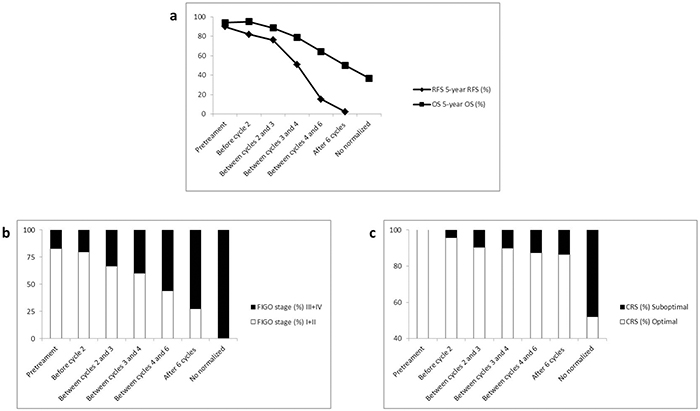 Ovarian CCC is one of the most common histological subtypes of EOC that is associated with endometriosis, with a frequency that ranges widely from 9% to 70% [22, 25-30], and endometriosis may increase the risk for this disease [26, 31-33]. EAOC presented in 35.2% of patients in our series. The present analysis confirmed our previous study [24] showing that EAOC negatively impacts the risk of elevated CA-125 and the absolute value of this biomarker in patients with CCC. The prognostic implications of endometriosis in ovarian CCC are controversial. Orezzoli [22] and Komiyama [28] found that patients with EAOC tended to have a favorable prognosis. Additionlly, the patient group in their study was likely younger with earlier stage disease [22]. Erzen et al. [25] demonstrated that EAOC exhibited lower stages at presentation and a better clinical outcome in patients with various histological subtypes of EOC, including CCC. This increased survival was evident in all age groups and all histological subtypes, and it could not be explained by better stage specific survival in any FIGO stage. Patients with EAOC in this analysis experienced slightly more favorable clinical outcomes compared with patients with negative EAOC (5-year RFS: 66.5% vs. 51.3%; 5-year OS: 85.9% vs. 75.0). However, this difference was not statistically significant (p = 0.058 and p = 0.072, respectively), consistent with our previous study [24]. Cutt et al. [26] also claimed that endometriosis per se is not predictive of prognosis in ovarian CCC. Therefore, the prognostic implication of endometriosis for ovarian CCC remains unclear, and further investigation will be necessary.

The prognostic value of CA-125 normalization in ovarion CCC

The likelihood of elevated pretreatment CA-125 as well as pretreatment CA-125 levels themselves both increased significantly in patients with adverse prognostic factors, including advanced stage and positive residual tumor, whereas they decreased in patients with EAOC, a potentially favorable factor. However, absolute value of pretreatment CA-125 level was not identified as a predictor of relapse and survival based on our data or previous reports [17, 19]. Serial CA-125 measurements during chemotherapy treatment were indeed prognostic, and normalization before the second cycle of chemotherapy was associated with a significantly decreased risk of relapse and death. By contrast, patients with CA-125 levels that normalized after the completion of cycle 1 or never normalized were significantly more likely to experience disease progression. The 5-year RFS and OS rates in the current study were 90.1% and 94.0%, respectively, for patients whose CA-125 level normalized either before chemotherapy or before cycle 2. These two parameters successively decreased from 82.1% and 95.2% to 2.3% and 50.1% when CA-125 normalized before cycle 2 compared with after cycle 6, respectively. These two parameters successively decreased respectively from 82.1% and 95.2% to 2.3% and 50.1% in patients whose CA-125 levels normalized after cycles 2 ~ 6 cycles, respectively. Furthermore, the 5-year OS rate was as low as 36.7% for patients who never normalized their CA-125 levels. No normalization of CA-125 after the completion of first-line chemotherapy was a sufficient condition for persistent disease. Therefore, this patient group was excluded from RFS-related analysis.

This analysis included results from 375 cases with ovarian CCC, making it one of the largest studies on this rare disease, despite its retrospective nature. Patient clinico-pathological data and follow-up information in the present study were relatively complete. These strengths enabled us to perform a robust analysis to evaluate the prognosis-predicting value of CA-125 normalization, and our findings provide useful information to improve monitoring strategies for this lethal tumor.

The medical records of all CCC patients diagnosed and treated at Peking Union Medical College Hospital (PUMCH) and Beijing Chao-Yang Hospital between 1993 and 2013 were collected and reviewed. Patients whose tumor specimens from the initial surgery were histologically confirmed as pure-type ovarian CCC were included for further analysis. Patients suffering from a primary malignant tumor in another part of the body or other malignant ovarian cell types were also excluded. Patient information, including demographic and pathological characteristics, surgery, subsequent systemic chemotherapy, and disease status at last contact, were collected and evaluated.

Serum CA-125 levels were measured using a radioimmunoassay kit (Roche F170 Modular system). Rising CA-125 levels were defined as a progressive increase in three consecutive serum antigen values above 35 U/mL, which is the commonly accepted normal upper limit for CA-125. Serum CA-125 served as both a pre- and post-operative tumor marker, and levels were evaluated within one week prior to staging surgery or cytoreductive surgery (CRS), prior to each cycle of chemotherapy, and at each contact during the follow-up period.

The surgical procedures, subsequent systemic chemotherapy, and the follow-up strategy after the completion of treatment were carried out as previously described [11]. Briefly, the predominant initial surgical procedure consisted of cytoreductive surgery or staging surgery. Ascites or washings were routinely collected before surgery, and cytological data were evaluated for all of the patients. Lymphadenectomy was not mandatory. Two independent pathologists with extensive experience in gynecological pathology reviewed all of the pathological slides for this analysis, and these pathologists were blinded to patient outcome. Disease staging was re-assigned using the exact FIGO staging criteria [20]. Optimal CRS was defined as abdominopelvic residual disease ≤1 cm after debulking surgery. Endometriosis-associated ovarian carcinoma (EAOC) was defined as the co-existence of CCC with endometriosis in the same and/or contralateral ovary and/or the co-existence of CCC with extraovarian endometriosis [21, 22].

Taxane/platinum or conventional cis/carboplatin-based chemotherapy (6 to 9 cycles) were administered as the post-operative first-line treatment. Responses to the systemic agents were recorded using version 1.1 of the Response Evaluation Criteria in Solid Tumors (RECIST) [23]. GCIG CA-125 response criteria [12] were used in the absence of measurable disease.

Patient records and information were anonymized and de-identified prior to analysis; therefore consent was not necessary. The study protocol was approved by the ethics committee respectively at PUMCH and Beijing Chao-Yang Hospital, Beijing, China.

All statistical analyses were performed using SAS® Version 9.2 (SAS Institute, Cary, NC). All of the tests were 2 sided, and P < 0.05 was considered statistically significant. Chi square or Fisher exact tests was performed to identify high-risk factors for elevated serum CA-125 levels. The two-tailed independent-sample Wilcoxon Rank Sum test was used to compare serum CA-125 levels between subgroups. The Kaplan-Meier method was used to analyze relapse and survival. A log rank test was used to compare the different survival curves. A Cox proportional hazards model was applied to all parameters that were significant in the univariate analysis. Simple lineal regression analysis was used to estimate linear correlations between CA-125 normalization and prognostic predictors.

FIGO stage and residual tumor after initial CRS were the most important prognostic factors for ovarian CCC. CA-125 elevation rate and absolute value increased significantly in patients with advanced stage and residual tumor after initial CRS and decreased in patients with EAOC, which is itself a contested favorable factor for prognosis. However, CA-125 levels at pretreatment were not useful for predicting patient clinical outcome. CA-125 levels after treatment was a valid indicator for treatment monitoring. CA-125 normalization after the completion of cycle 1 of chemotherapy was a distinct inflection point for decreased RFS and OS.

Source of the study

20. Prat J. Staging classification for cancer of the ovary, fallopian tube, and peritoneum. International journal of gynaecology and obstetrics. 2014; 124:1-5.