11 Section of Biostatistics and Epidemiology, The Geisel School of Medicine at Dartmouth, Lebanon, NH, USA

Results: At nine of eleven previously published EOC susceptibility regions (2q31, 3q25, 5p15, 8q21, 8q24, 10p12, 17q12, 17q21.31, and 19p13), novel variants were identified that were more strongly associated with risk than previously reported variants. Beyond known susceptibility regions, no variants were found to be associated with EOC risk at genome-wide statistical significance (p <5x10-8), nor were any significant after Bonferroni correction for 17,000 variants (p< 3x10-6).

Methods: A customized genotyping array was used to assess over 17,000 variants in coding, non-coding, regulatory, and known susceptibility regions in 4,973 EOC cases and 5,640 controls from 13 independent studies. Susceptibility for EOC overall and for select histotypes was evaluated using logistic regression adjusted for age, study site, and population substructure.

Epithelial ovarian cancer (EOC) is the second most common gynecologic cancer in the US, but it leads in deaths owing to its tendency to be diagnosed in the late stages of disease [1]. EOC is composed of five major histologic types [2]: high-grade serous carcinoma (HGSC), accounting for most cases (~70%); and the rarer clear cell, endometrioid, mucinous, and low-grade serous carcinomas (LGSC). Known rare mutations in DNA repair and mismatch repair genes are thought to account for 10%-15% of all EOCs [3-9]. Common alleles identified by genome-wide association studies (GWAS) are thought to account for an additional 3%-4% of EOC risk [10-17]. Still, much of about the heritability of EOC remains unaccounted for. Here, we sought to identify additional EOC susceptibility variants through direct genotyping and analysis of EOC cases and controls from 13 independent studies. We targeted variants based on innovative pilot studies, hypothesizing that previously ungenotyped variants may be responsible for a proportion of the unexplained EOC susceptibility. 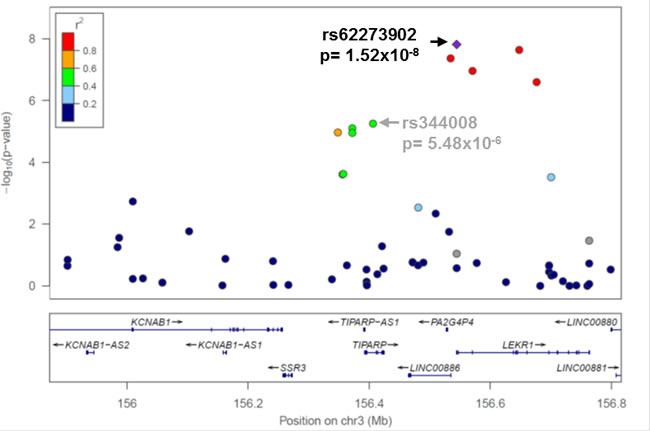 We targeted 5,320 variants which showed suggestive association with susceptibility in a pilot-scale whole genome sequence analysis that compared germline sequence of EOC patients (N= 19) to 1000 GP participants (N= 174). No novel variants reached genome-wide significance for association with EOC risk overall or HGSC (p≤ 5x10-8), nor were significant after Bonferroni correction (p≤ 9x10-6). Nonetheless, the risk estimates generally were in the expected direction based on pilot data, and several variants merit investigation in larger case-control collections (Table 2). For example, among variants targeted because they were present only in EOC germline sequence data (WGS EOC+ in Table 2), the most strongly associated risk variant was rs138643956 (OR= 3.68; pHGSC= 2 x10-4). For variants selected because they were absent from whole genome sequenced EOC cases (WGS EOC- in Table 2), the most associated variant was rs9380516 (OR= 0.83; pHGSC= 6 x10-5); in the current study this variant showed a case MAF of 0.15, suggesting that this was a missed variant in the pilot sequencing study. For variants targeted which were present in whole genome sequenced EOC cases and in 1000 GP data, but differed in MAF (WGS EOC↑ and WGS EOC↓ in Table 2), the current analyses were generally consistent, including rs117841616 on chromosome 20 (pall histology= 2 x10-4) and rs240783 (pHGSC= 8 x10-4) on chromosome 6. In general, very few variants targeted based on suggestive association in pilot sequence study had appreciable MAF differences (case vs. control) in the current genotyping study. As expected due to small sample size, we observed that case MAF estimates in our pilot whole genome sequencing study were both inflated and deflated compared to the current study.

Finally, among NF-κB-related variants and those hypothesized to associate with endometrioid EOC risk, the most suggestive results for variants which disrupt NF-κB binding [19, 20] were intergenic variants rs10143322 on chromosome 14 (pall-histology= 3 x10-5) and rs6092485 on chromosome 20 (pHGSC= 7x10-4) (Table 2). If Bonferroni correction for the number NF-κB binding site variants tested is applied, the threshold for statistical significance is p<4 x10-5 (p= 0.05/1,302), and this single variant, rs10143322, is declared significant; using experiment-wide and certainly genome-wide multiple testing corrections, it is not significant. Among variants previously identified in a pilot GWAS of endometrioid EOC, the most significant variants were intronic variant rs2638653 (pendometrioid= 1 x10-4) on chromosome 8 (Table 2), and intergenic rs9264042 on chromosome 6 (pall-histology= 5 x10-4). These modest associations may also warrant follow-up in larger studies. 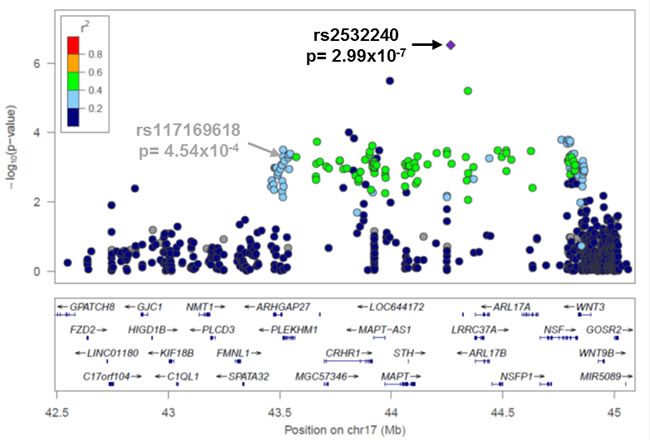 The objective of this study was to test whether novel variants identified through a combination of approaches were associated with EOC susceptibility. We took an innovative approach to the selection of variants, including the use of whole genome sequencing data to target novel variants correlated with known GWAS risk variants, comparison of sequencing EOC cases to 1000 GP participants beyond these regions, NF-κB functional data, and GWAS analysis of EOC cases with endometrioid histology.

In nine of the eleven susceptibility regions investigated, novel variants were more highly associated with all histology EOC risk than previously reported variants, and, in the HGSC only analysis, novel variants were more strongly associated with susceptibility at seven loci. Further work on thesevariant may provide more biological insight. For example, at the 3q25 locus, the novel variant rs62273902 (all histology) coincides with a genomic sequence that appears functionally active in a range of cell lines and tissues relevant to EOC, including ovary, as assayed by the Roadmap Epigenomics Mapping Consortium (REMC), http://www.epigenomebrowser.org/. rs62273902 resides within a DNase peak, an active transcription start site (TSS), and multiple proteins across diverse tissues bind the sequence spanning this variant. rs62273902 is therefore a good functional candidate variant at this locus. As well, at 17q21.31, the novel variants (rs2532240 in all histologies and rs3785880 in HGSC-only analysis) are separated by 272 kb and not correlated with each other or the previously reported variant rs1294266. rs2532240 coincides with a chromatin region marked as a weak/poised enhancer in several tissues, including ovary (REMC [21]); however, it does not overlap transcription factor binding sites (TFBS) or DNase peaks. rs12942666 does not coincide with promoter or enhancer regions in tissues relevant to EOC in the REMC data, suggesting it is unlikely to be functionally relevant. The 17q21.31 variants are located in a large region of strong LD previously identified as the “17q21.31 inversion” (~900kb long), which exists either as a direct (H1) or inverted (H2) haplotype in the European population [14, 15, 22]. Further investigation of how these variants might impact EOC risk is needed.

Among variants genotyped based on our pilot study comparing whole genomes of EOC cases and 1000 GP participants, none were significant after multiple testing correction for 5,320 variants. Despite our sample size (4,973 cases and 5,640 controls), power to detect associations with low MAF variants was limited. Variants in NF-κB binding sites were also not associated with EOC risk at genome-wide significance. Noting the debate regarding the use of p<5 x10-8 as the threshold for statistical significance when evaluating potentially functional variants with presumed higher prior probability [23], Bonferroni correction for the number of NF-κB binding site variants yields one statistically significant variant (rs10143322, p= 3x10-5). rs2638653, a variant selected based on an unpublished GWAS of endometrioid EOC, and found here to be the variant most associated with endometrioid EOC risk (p= 1 x10-4), coincides with chromatin marked as being an active promoter in ovary tissues (of PSD3), but not an enhancer or DNase site. Interestingly, loss of heterozygosity on chromosome 8p22, where this variant is located, is common in EOC tumors, and reduced expression of genes in this region has been found to negatively impact survival in EOC [24].

In summary, we developed a diverse panel of previously ungenotyped variants to directly test for association with EOC susceptibility in 4,973 EOC cases and 5,640 controls from 13 independent studies. Our innovative approach to variant selection included the first use of whole-genome sequencing data from EOC cases in novel variant discovery. At several EOC susceptibility regions, we report novel risk variants for further association and functional investigation. Beyond known regions, this first pass at using whole genome sequencing pilot analyses, although underpowered, also yielded variants of potential interest (rs138643956 and rs117841616). The key strength of this report is the use of direct genotyping of novel variants, some rare, while its key limitation is an inability to more comprehensively examine rare variation. Larger scale genotyping and/or improved genotype imputation accuracy will facilitate further scrutiny of the variants highlighted here.

Study participants were drawn from 13 independent EOC case-control studies of the Ovarian Cancer Association Consortium and were restricted to women of European ancestry. Characteristics of the contributing studies are given in Supplemental Table 2 and have been described previously [18]. Cases (N=4,973) consisted of women aged 18 and older with a pathologically confirmed primary invasive EOC, fallopian tube cancer, or primary peritoneal cancer; controls (N=5,640) were matched by age and region.

A total of 17,439 germline DNA variants were genotyped using a customized Affymetrix Axiom Exome array (Affymetrix Corporation, Santa Clara, CA). These variants were drawn from four discovery categories: 1) from eleven known EOC susceptibility regions (N =6,948; Supplemental Table 3) [10-14, 18], identified by in silico fine-mapping and a small germline whole genome sequencing study of EOC cases, 2) variants outside these eleven regions which showed suggestive association in pilot whole genome sequencing of serous EOC cases (compared to 1000 Genomes Project [GP] data)(N = 7,189), 3) variants with a hypothesized role in disrupted binding of NF-κB transcription factors, which are known to have central roles in immune and inflammatory responses and cancer [19, 20, 25, 26](N = 1,302), and 4) the top associated variants from a pilot GWAS of endometrioid EOC (N = 2,000). See the Supplemental Methods for more detail on the selection of these variants.

All cases were included in the overall EOC risk association analyses (N=4,973). Subset analyses were performed on histologic subsets based on a priori selection; HGSC (N=3,573) and endometrioid EOC (N=835). For each analysis, 5,640 controls were used. Associations were estimated using logistic regression assuming an additive genetic model, adjusting for age, study site, and population substructure by including the first three eigenvalues from principal components analysis [18]. All analyses were conducted in R version 3.0.2 (http://www.R-project.org/).