Hepatocellular carcinoma (HCC) is a common and leading cause of death worldwide. Here, we identified that a cell-cell adhesion gene, CTNNA3, is a tumor suppressor in HCC. CTNNA3 inhibited the proliferation, migration and invasion of HCC cell lines. In these cells, CTNNA3 inhibited Akt signal, and in turn decreased the proliferating cell nuclear antigen (PCNA) and the matrix metallopeptidase MMP-9, and increased the cell cycle inhibitor p21Cip1/Waf1. Meanwhile, CTNNA3 is inhibited by miR-425 in HCC. The miR-425 directly bound to the 3′UTR of CTNNA3 and inhibited its expression. The tumor suppressor function of CTNNA3 and the oncogenic function of miR-425 were further confirmed in HCC cell xenograft in nude mice. The miR-425/CTNNA3 axis may provide insights into the mechanisms underlying HCC, and contribute to potential therapeutic strategy of HCC.

Human hepatocellular carcinoma (HCC) is the second leading cause of cancer-related death, causing an estimated over half a million deaths annually [1, 2]. Metastasis is the leading cause of most cancer-related deaths [3], especially in HCC [4]. Adhesion-junction proteins, which are intercellular junctions abundant in normal epithelia and reduced in cancers [5], were found to contribute to carcinogenesis and metastasis of many types of cancer [6]. Adhesion-junctions are formed by transmembrane E-cadherin, β-catenin, and α-catenin [5]. α-catenin integrates adhesion-junctions with the actin cytoskeleton and could promote intercellular adhesion [5]. α-catenin is a putative tumor suppressor in myeloid leukemia [7], glioblastoma [8], skin cancer [9, 10] and breast cancer [11, 12]. Among the three α-catenin coding genes, CTNNA1 participates the carcinogenesis of multiple types of cancers [12, 13], and mutates in HCC [14]. CTNNA2 mutates in gastric cancer [15] and laryngeal carcinomas [16]. CTNNA3 is a tumor suppressor and frequently mutates in laryngeal carcinomas [16] and low-expressed in urothelial carcinoma of the bladder [17]. The role of CTNNA2 and CTNNA3 in HCC haven’t been found yet.

miRNAs are small, non-coding RNAs that negatively regulate the expression of target genes by mRNA degradation or translational repression [18]. miRNAs function as important regulators in cancer microenvironment [19, 20]. Many miRNAs, like miR-3127 [21], miR-494 [22], miR-42509 [23], participate the carcinogenesis of HCC by inhibiting their target genes. Therefore, miRNAs are also included in our study.

In this study, we analyzed the expression of the three α-catenin coding genes in HCC using microarray data of HCC samples and normal liver controls with bioinformatics methods and identified that CTNNA3 was down-regulated in HCC. CCK8 and Transwell assays revealed that CTNNA3 inhibited proliferation, migration and invasion of HCC cells. The silence of CTNNA3 resulted in increased proliferating cell nuclear antigen (PCNA), decreased cell cycle inhibitor p21Cip1/Waf1 and Akt signal activation, as well as the increased matrix metallopeptidase MMP-9. miR-425 inhibited CTNNA3 in HCC. miR-425 directly bound to the 3′untranslated region of CTNNA3 and inhibited CTNNA3 to promote the proliferation, migration and invasion of HCC cells.

CTNNA3 was down-regulated in HCC

The comparison of gene expression between HCC and normal healthy controls indicated that CTNNA3 was down-regulated (P-value < 0.05 and LgFC < –1) in 78 of 81 human HCC samples. The other two α-catenin coding genes, CTNNA1 and CTNNA2, were not deregulated in the analyzed HCC dataset. Therefore, CTNNA3 was selected for further investigation. 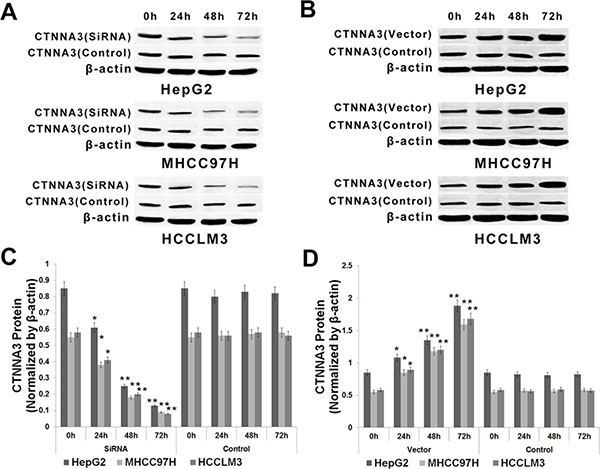 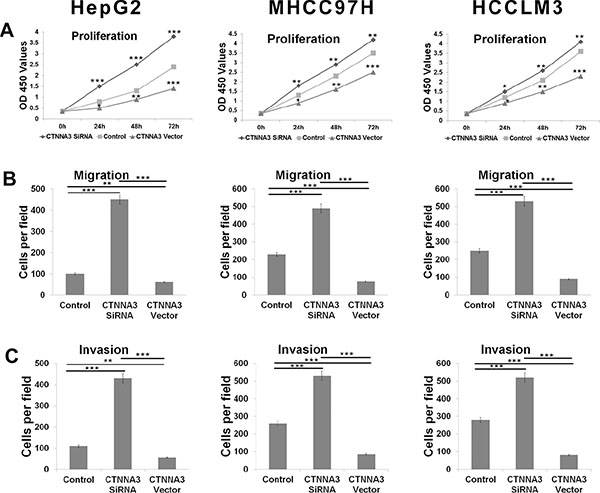 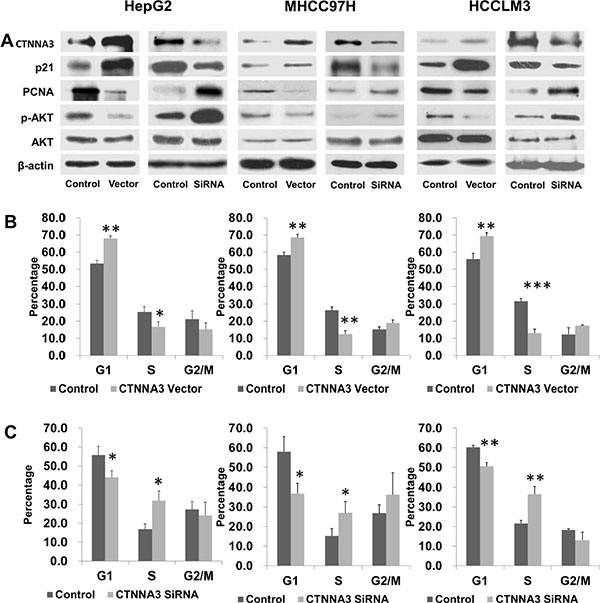 It has been reported that Akt promotes cancer cell invasion by increasing matrix metallopeptidase (MMP-9) [25]. This leads to the hypothesis that MMP-9 may also participate the molecular mechanisms underlying CTNNA3 related inhibition of cell migration and invasion. Therefore, we investigated expression of MMP-9 in CTNNA3 knockdown cells, CTNNA3 overexpression cells and control cells with and without 12-O-tetradecanoylphorbol- 13-Acetate (TPA) treatment, which is an activator of protein kinase C that can promote cancer cell invasion via MMP-9 induction [26]. The results indicated that CTNNA3 inhibited MMP-9 in TPA-treated cells (Figure 4). These results indicated that MMP-9 may be part of the molecular mechanisms that underlying the cell invasion inhibition by CTNNA3 in HCC. 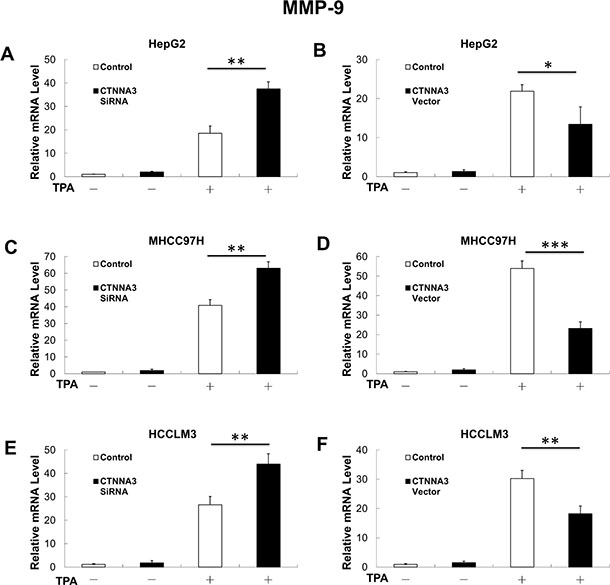 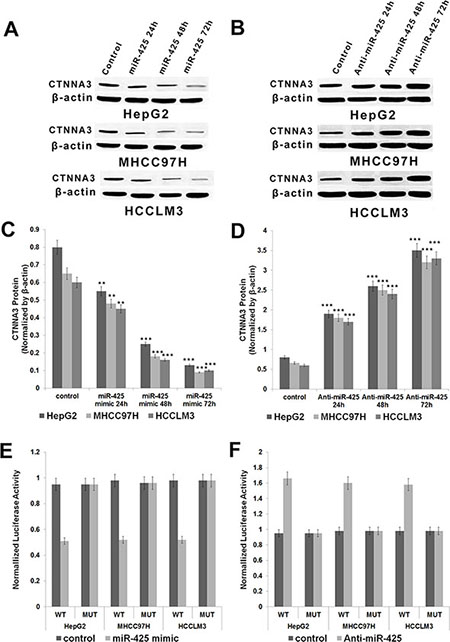 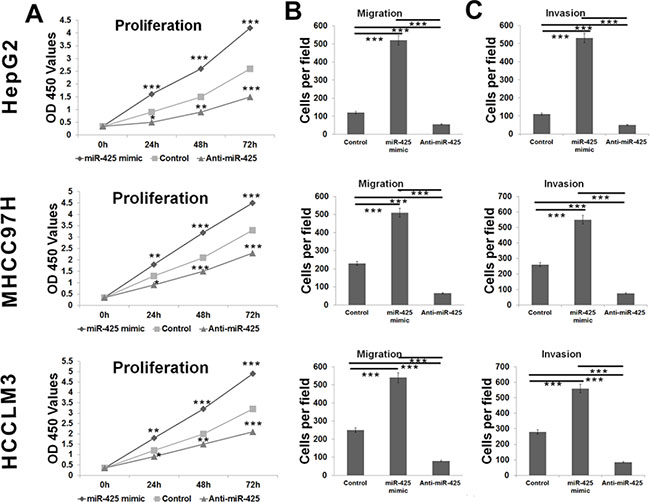 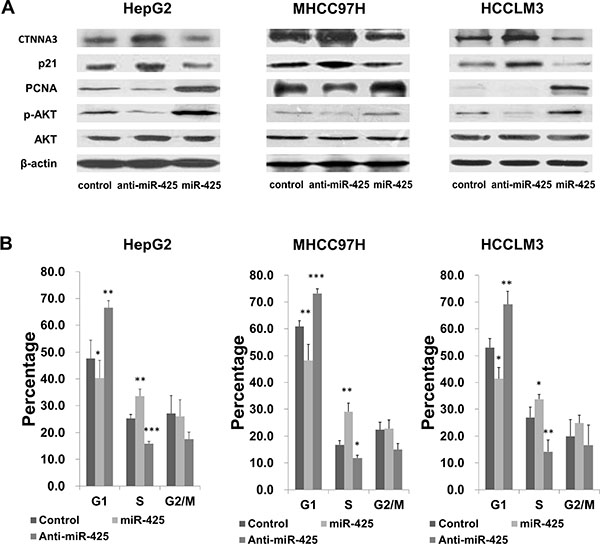 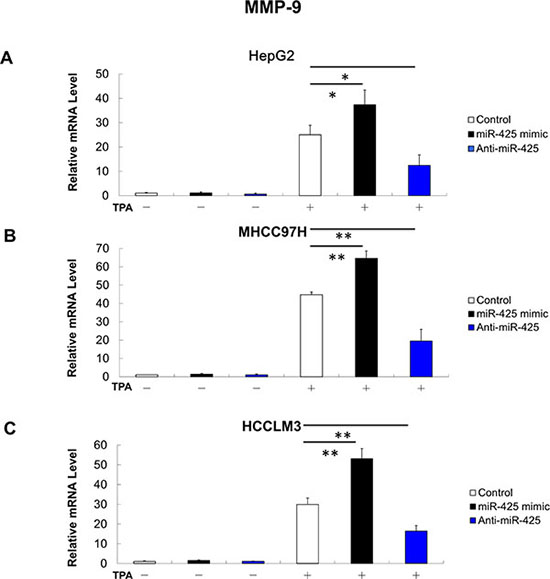 To explore the relationship between miR-425/CTNNA3 axis and tumorigenesis in vivo, the xenograft model of HCC cells in nude mice was adopted. We used lentiviral vectors for the stable expression of CTNNA3, CTNNA3 siRNA (Sh CTNNA3), miR-425 and miR-425 inhibitor (anti-miR-425) in MHCC97H cells. MHCC97H cells that stably expressed CTNNA3, ShCTNNA3, miR-425, anti-miR-425, or their controls were injected subcutaneously into each flank of nude mice. The tumor weights and volumes were monitored. Then the growth curves of the tumors were plotted accordingly. We found that CTNNA3 overexpression decreased tumor growth and miR-425 promoted tumor growth in vivo (Figure 9A–9C). We further performed IHC staining for Ki67 and PCNA in the tumors. Compared with the negative control, CTNNA3 overexpression suppressed proliferative activity, as indicated by the percentage of cells positive for Ki67 and PCNA staining. In contrast, miR-425 overexpression increased the percentages of Ki67- and PCNA-positive cells (Figure 10). These in vivo observations confirmed the key role of miR-425/CTNNA3 axis in the control of HCC cell growth and may serve as potential therapeutic targets for HCC treatment. 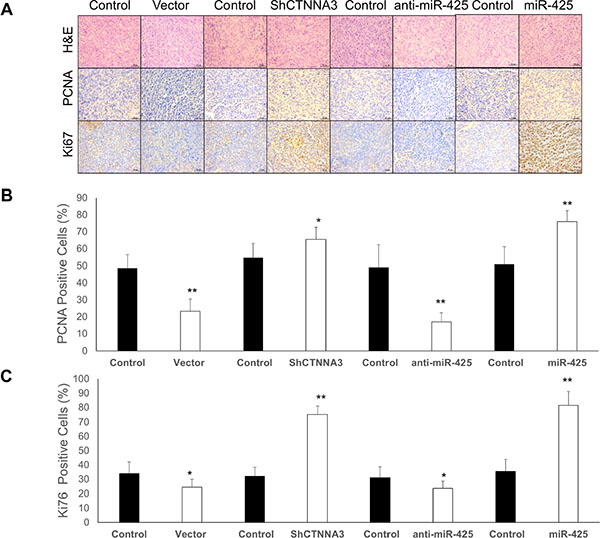 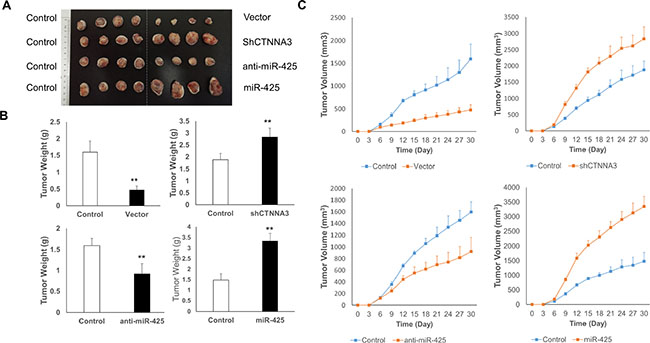 HCC is the second leading cause of cancer-related death, causing an estimated over half a million deaths annually [1, 2]. Theα-catenin coding genes, CTNNA1, CTNNA2 and CTNNA3, participate carcinogenesis of multiple cancers, such as laryngeal carcinomas [16], oropharyngeal squamous cell carcinomas [29] and breast cancer [12]. In this study, we analyzed gene microarray data of HCC samples and normal liver controls using bioinformatics methods with a special focus on the three α-catenin coding genes. The results indicated that CTNNA3 was down-regulated in HCC (LgFC < –1).

Invasion and metastasis are characteristic features of HCC and major poor prognostic factor in HCC patients. Degradation of the extracellular matrix and the basement membrane is necessary for invasion and metastasis. CTNNA3 encodes an adhesion-junction protein. It explains why CTNNA3 inhibits the migration and invasion of the HCC cells. Moreover, it’s interesting to find that CTNNA3 inhibits HCC invasion not only by itself. MMP-9, which plays an important role in the proteolytic destruction of the extracellular matrix and basement membranes, was found to be inhibited by CTNNA3 (Figure 4). MMP-9 would be increased by Akt signaling pathways [30]. In this study, we showed that CTNNA3 inhibits the Akt signaling in HCC cells. Therefore, CTNNA3 may inhibit cell invasiveness by inhibiting MMP-9 via Akt signaling pathway.

Then we explored the potential mechanism of impaired CTNNA3 expression in HCC. The miRNAs, which inhibit gene expression and function as important regulators in cancer microenvironment [20, 31], were selected as the research focus. Bioinformatics analysis indicated the potential regulatory interaction between miR-425 and CTNNA3. Luciferase assay and western blot confirmed that miR-425 directly targets the 3′UTR region of CTNNA3 and inhibit its expression (Figure 5). The inhibition of CTNNA3 by miR-425 in turn resulted in increased PCNA, decreased p21Cip1/Waf1 and Akt activation (Figure 7A), as well as the increased MMP-9 (Figure 8). CCK-8 and transwell assay showed that miR-425 promoted cell proliferation, migration and invasion of HCC cell lines (Figure 6). Moreover, miR-425 promotes the tumor growth of the HCC cell xenograft in nude mice, while CTNNA3 suppresses the growth. These results revealed that miR-425 promotes cell proliferation, migration and invasion by inhibiting CTNNA3 in HCC.

In general, our study highlights the crucial role of CTNNA3 in human HCC by inhibiting cell proliferation and invasion. And CTNNA3 is inhibited by miR-425. The miR-425/CTNNA3 axis provide insights into the mechanisms underlying human HCC, and may be involved in potential therapeutics of HCC.

Gene and miRNA microarray data of HCC and normal control samples were collected from GEO database (http://www.ncbi.nlm.nih.gov/gds, GSE62232, GSE67882, and GSE40744). After quality control with limma package on R platform, 81 patients with HCC and 10 healthy controls were selected for gene expression analysis, 13 HCC patients and 15 healthy controls were selected for miRNA expression analysis.

Human miRNA target genes prediction were performed using miRNA sequences downloaded from the Rfam website (http://www.sanger.ac.uk/Software/Rfam) on January 2015. A uniform system for microRNA annotation was used to retrieve 3′UTR sequences data for human genes [32] RepeatMasker [33] was used to mask repetitive elements in these sequences. The miRanda [27] and TargetScan [28] methods were used to predict the target genes of miRNAs. The predicted target genes that supported by both of the methods were selected for further analysis.

The human HCC cell lines HepG2, MHCC97H and HCCLM3 was obtained from the Chinese Center for Type Cultures Collections (CCTCC, Wuhan, China). The HepG2, MHCC97H and HCCLM3 cell lines were cultured in RPMI 1640 media (Life Technologies, Beijing, China) and supplemented with 10% fetal bovine serum (FBS) (Life Technologies, Beijing, China). All the Cells were maintained at 37°C in a humidified atmosphere with 5% CO2.

Cell proliferation was detected using a Cell Counting Kit-8 assay (Dojindo, Kumamoto, Japan). HepG2, MHCC97H and HCCLM3 cells were plated in 24-well plates at 3 × 105 cells/well. Then HCC cells were incubated at 37°C in 10% CCK-8 diluted with normal culture medium for color conversion. Proliferation rate was measured at 24 h, 48 h and 72 h after transfection.

6 × 105 cells were synchronized by serum starvation for 24 h. Then the cells were induced to re-enter the cell cycle by changing with 10% fetal bovine serum for 24 h. floating and adherent cells were harvested and fixed using 75% ethanol overnight at 4°C. After that, cells were incubated with RNase A for 30 min at 37°C. Then cells were stained with propidium iodide. Cell cycle was determined by flow cytometry.

HepG2, MHCC97H and HCCLM3 cells were seeded in 24-well plates at 3 × 105 cells/well and then incubated for 24 hours. Then the HepG2, MHCC97H and HCCLM3 cells were co-transfected with 0.6 μg of pGL3-CTNNA1–3′UTR or pGL3-CTNNA1–3′UTR Mut plasmid, or 0.06 ng of the phRL-SV40 control vector (Promega, Beijing, China), and 100 nM miR-425 mimics or miR-425 inhibitors or control RNA using Lipofectamine 2000 (Invitrogen, Beijing, China). The renilla and firefly luciferase activities were measured by a dual luciferase assay (Promega, Beijing, China) at 24 h after transfections.

Tumor cells (5 × 106) were injected subcutaneously into each flank of 4-week-old male Balb/c athymic nude mice (n = 8 per group). Mice were monitored every three day and euthanized one month later. Then tumors were dissected and weighed. The tumor volume was calculated as V (volume, mm3) = 0.5 × L (length, mm) × W2 (width, mm2).

IHC was performed on tissue microarray chips (Outdo, Shanghai, China). Single serial sections were made from xenograft tumor samples. The slides were probed with the following primary antibodies: mouse anti–human Ki67, and mouse anti–human PCNA (Abcam, Beijing, China). Then the slides were incubated with HRP-conjugated goat anti–mouse secondary antibodies. The proteins were visualized in situ with DAB chromogenic substrate.

The Project was supported by the National Natural Science Foundation of China (Grant No. 61372151).

Authors have declared that no competing interest exists.