Breast cancer is the most common cancer in women worldwide, and its incidence continues to rise [1, 2]. Radiotherapy is recommended for most patients for local control following breast conserving surgery, as well as following mastectomy in patients who are at high risk of recurrence [3–5]. However, some patients are resistant to radiotherapy and the failure of local control in breast cancer decreases the overall survival rate of patients [6, 7]. Thus, identifying both a molecular signature to predict the outcome of radiotherapy and targets to sensitize radioresistant cells is essential for improving the efficacy of radiotherapy in breast cancer. Accumulating evidence suggests that differences might exist in the radiation susceptibility of each molecular subtype of breast cancer [4].

Human epidermal growth factor receptor 2 (HER2) is overexpressed in approximately 25–30% of breast cancer patients, and it plays a key role in both the progression and metastasis of breast cancer [8]. High levels of HER2 are associated with poor prognosis and reduced survival rates [9]. Therefore, HER2 inhibition might be an effective strategy to reduce tumor aggressiveness [10, 11]. Several reports have shown that HER2 inhibition sensitizes breast cancer cells to irradiation both in vitro and in vivo [12–15]. This suggests that HER2 might be a predictive biomarker as well as a molecular target for radiotherapy in breast cancer patients [16]. However, HER-2 status alone cannot be used a predictive marker for survival after postmastectomy radiotherapy [17]. Therefore, the correlation between the molecular profile of breast cancers such as, HER2 and hormone receptor (HR) status, and their susceptibility to radiotherapy needs to be evaluated.

Signal transducer and activator of transcription 3 (STAT3) is a transcription factor that transduces oncogenic signals from cytokines and growth factors to the nucleus [18]. Constitutive activation of STAT3 is frequently observed in a variety of human cancers, including breast cancer [19, 20], and plays a role in tumor progression and resistance to anti-cancer treatments by regulating the growth and survival of tumor cells [18]. In addition, a number of recent studies have shown that STAT3 might be a promising target for treatment of chemo- and radio-resistant tumors [15, 21–24]. Further, increased activation of STAT3 and its target genes, such as survivin, is often associated with tumor resistance to chemotherapy and radiotherapy in the brain, breast, colon, rectum, head, neck, and lung [21, 25]. Inhibition of the STAT3 pathway often sensitizes radio-resistant tumor cells in various cancers to irradiation [15, 21, 22]. Thus, understanding STAT3 signaling is crucial for predicting and overcoming tumor resistance.

The clinicopathologic features of the patients are summarized in Table 1. Patients were classified into four categories based on the molecular expression of HR (estrogen receptor [ER] and/or progesterone receptor [PR]) and HER2 in their tumors [26, 27]: HR+/HER2-, HR+/HER2+, HR-/HER2+, and HR-/HER2-. The majority of these patients were HR+/HER2- (54.9%, 929 of 1,693 patients), followed by HR-/HER2- (20.5%, 347 of 1,693 patients), HR+/HER2+ (13.6%, 231 of 1,693 patients), and HR-/HER2+ (11.0%, 183 of 1,693 patients). The locoregional recurrence-free survival was significantly different among these groups. HR+/HER2- breast cancer patients showed the highest locoregional recurrence-free survival rate, whereas HR-/HER2+ patients had the lowest locoregional recurrence-free survival rate (P < 0.001; Figure 1A). This suggests that different molecular subtypes of breast cancer are inherently associated with different sensitivities to radiotherapy. Therefore, we hypothesized that the HR-/HER2+ subtype is associated with higher radiotherapy resistance compared to other molecular subtypes of breast cancer. To test this possibility, a clonogenic survival analysis in response to various doses of irradiation was performed using various breast cancer cell lines, including MCF7 and T47D (HR+/HER2-), MDA-MB231 (HR-/HER2-), BT474 (HR+/HER2+), and SKBR3 (HR-/HER2+). Interestingly, we observed that the HER2-positive (HR-/HER2+) breast cancer cell line SKBR3 exhibited the most radioresistant phenotype of all breast cancer cells tested (Figure 1B and C). Taken together, our clinical and pre-clinical results suggested that HER2-positive breast cancer is resistant to radiotherapy.

Table 1: The clinicopathologic characteristics of patients

Figure 1: HR-/HER2+ subtype was associated with radioresistance in breast cancer patients as well as breast cancer cell lines. A. Kaplan–Meier event free survival curve in patients treated with breast-conservation therapy followed by adjuvant radiotherapy (log-rank test, P < 0.001). B. MCF7, MDA-MB231, SKBR3, T47D, and BT-474 cells were treated with different doses of radiation as indicated. The clonogenic survival fraction was determined by clonogenic assay. C. MCF7, MDA-MB231, SKBR3, T47D, and BT-474 cells were analyzed by immunoblotting with anti-HER2 and anti-ER antibodies. β-actin was used as a loading control. The data are presented as the mean ± standard deviation of three independent experiments. 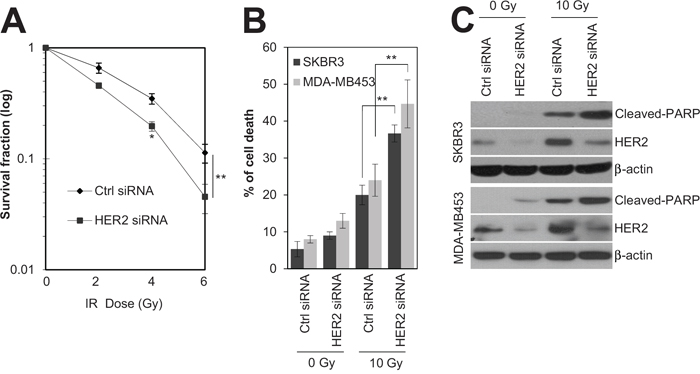 Figure 2: HER2 depletion sensitized HR-/HER2+ breast cancer cells to irradiation. A. SKBR3 cells were transfected with 100 nM of control siRNA or HER2 siRNA. After 48 h, the cells were treated with different doses of radiation, as indicated. B and C. SKBR3 cells or MDA-MB453 cells were transfected with 100 nM control siRNA or HER2 siRNA. After 48 h, the SKBR3 cells or MDA-MB453 cells either were left untreated (Ctrl) or treated with 10 Gy of radiation (IR) for 48 h. Cell viability was determined with a FACScan flow cytometer, and data are presented as the percentage of propidium iodide-positive cells (B). The cells were analyzed by immunoblotting with anti-cleaved-PARP and anti-HER2 antibodies. β-actin was used as a loading control (C). The data represent typical results and are presented as the mean ± standard deviation of three independent experiments; *P < 0.05 or **P < 0.01 compared with irradiated siRNA control cells (A and B). 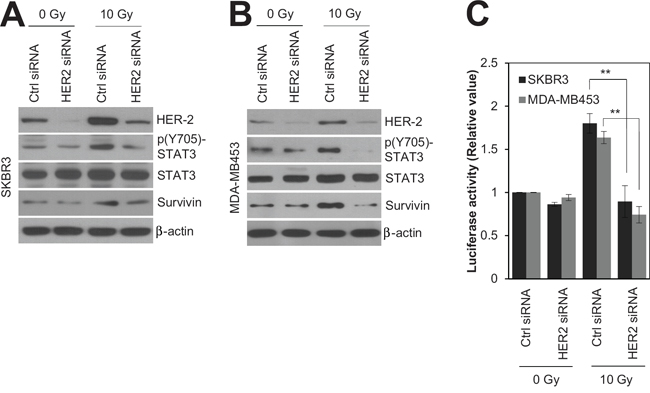 Figure 3: HER2 depletion radiosensitized HR-/HER2+ breast cancer cells by modulating STAT3 activity. SKBR3 cells or MDA-MB453 cells were transfected with 100 nM control siRNA or HER2 siRNA. After 48 h, SKBR3 cells or MDA-MB453 cells were either left untreated (Ctrl) or treated with 10 Gy of radiation (IR) for 48 h. A and B. Cells were analyzed by immunoblotting with the indicated antibodies. β-actin was used as a loading control. C. STAT3 activity in each sample was determined by a STAT3 activity assay. The data represent typical results and are presented as the mean ± standard deviation of three independent experiments; **P < 0.01 compared with irradiated siRNA control cells (C). 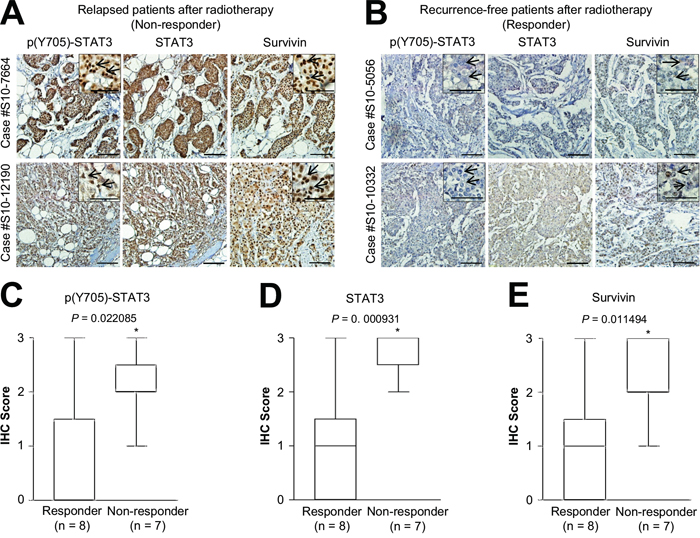 Our data showed that HER2 promotes radioresistance via STAT3-survivin regulation in HER2-positive breast cancers. Similar to our data, recent reports have suggested that STAT3 could be the key downstream mediator of HER2 signaling [31]. Duru et al. have shown that HER2-STAT3 cross-talk increases the aggressiveness and radioresistance of breast cancer stem cells [15]. Chung et al. reported that STAT3 activation by HER2 overexpression promotes cancer stem cell traits that correlate phenotypically with tumor resistance in HER2-expressing breast cancers [32]. Moreover, it has been suggested that downstream pathways of HER2, such as PI3K/Akt and NF-kB, crosstalk with STAT3 signaling in resistant phenotypes of breast cancer [31]. These findings suggest that HER2-STAT3 regulation is crucial regulator for tumor radioresistance of HER2-positive breast cancers.

On the basis of pre-clinic evidence indicating that inhibition of HER2 increases radiation sensitivity of breast cancers [13-15, 35], a combination treatment with radiation and HER2 inhibitors (trastuzumab or lapatinib) is currently under investigation in clinical trials [36]. Similarly, our pre-clinical evidence that inhibition of the HER2-STAT3-survivin axis increases radiation sensitivity of HER2-positive breast cancers suggests that targeting the HER2-STAT3-survivin axis may be important to overcoming radiotherapy resistance in HER2-positive breast cancers. Related to this observation, previous work by our group as well as others has shown that STAT3 inhibition is crucial for the treatment of various radioresistant tumors [21, 22, 24]. Further, Li et al. recently reported that trastuzumab resistance is regulated by STAT3-dependent feedback activation in HER2-positive breast and gastric cancers [24]. Therefore, STAT3 activation is a key pathway for the survival of various resistant tumors, including breast cancer.

Cell survival after irradiation was determined by a clonogenic assay as described previously [37]. Briefly, various densities of cells treated with different doses of radiation were seeded in triplicate in 60-mm tissue culture dishes. After 10–14 days the colonies were fixed with methanol and stained with a Trypan blue solution. Only colonies containing more than 50 cells using a colony counter (Image Products, Chantilly, VA) were counted as surviving colonies.

STAT3 activity was determined as described previously [30]. Briefly, the cells were co-transfected with 21pSTAT3-TA-Luc and control siRNA or HER2 siRNA for 48 h using Lipofectamine 2000 (Invitrogen, Carlsbad, CA). This was followed by either irradiation with 10 Gy or no treatment. The cells were harvested after 24 h using a passive lysis buffer, and luciferase activity was evaluated using the Dual Luciferase Reporter Assay Kit (Promega, Madison, WI) on a Wallac Victor2 plate reader (Perkin Elmer Corp., Norwalk, CT).

A cell death analysis was performed as described previously [37]. Briefly, cells were trypsinized and washed, followed by incubation with propidium iodide (5 μg/mL) for 10 min. The cells were analyzed with a FACScan flow cytometer (Becton Dickson, Franklin Lakes, NJ).

Between January 1980 and September 2010, a total of 1,693 primary breast cancer patients were included in this retrospective analysis. All patients were treated by curative surgery and adjuvant radiotherapy prior to this study. The clinical and pathologic data were obtained from a database of the Breast Cancer Center, Korea Cancer Center Hospital [39].

A pathologist evaluated ER, PR, and HER2 expression in samples from each case by immunohistochemistry (IHC) immediately after surgery. Positive staining for ER or PR was defined as staining of at least 10% of the nuclei in 10 high-power fields, and HER2 positivity was defined by an IHC staining intensity of 3+ or HER2 gene amplification by fluorescence in situ hybridization. Patients were classified into the following four molecular subtypes based on tumor expression of ER, PR, and HER2: (a) HR+/HER2- (ER- and/or PR-positive and HER2-negative), (b) HR+/HER2+ (ER- and/or PR-positive and HER2-positive), (c) HR-/HER2+ (ER-negative, PR-negative, and HER2-positive), and (d) HR-/HER2- (ER-negative, PR-negative, and HER2-negative).

The specimens for IHC were obtained from paraffin blocks of HER2 overexpressing primary breast cancer tissue that had been removed by curative surgery. The non-responder group to radiotherapy was defined as the group of patients who showed locoregional recurrence within 1 year after completion of radiotherapy. The responder group was defined as the group of patients who showed no evidence of disease during the follow-up period, which was at least 2 years from the completion of radiotherapy. We matched patients from each group by pathologic TNM staging and HR status. IHC experiments were performed as previously described [40, 41]. Briefly, immunohistochemical staining was performed using an anti-STAT3 mouse monoclonal antibody (1:200 dilution; Santa Cruz), anti-phospho-STAT3 rabbit polyclonal antibody (1:50 dilution; GeneTex, Irvine, CA), or anti-survivin rabbit monoclonal antibody (1:100 dilution; Cell Signaling Technology). Immunostaining was performed using the avidin-biotin-peroxidase method, according to the manufacturer’s instructions (Invitrogen). Staining intensity was scored as follows: 0 (no visible staining), 1+ (faint staining), 2+ (moderate staining), and 3+ (strong staining).

For the survival analysis, locoregional recurrence-free survival was defined as the time from the first diagnosis of primary breast cancer to the time of first detection of locoregional recurrence by physical examination or radiological imaging. The Kaplan-Meier method with log-rank test was used for the statistical analysis. A two-tailed Student’s t-test was performed to analyze statistical differences between groups. P < 0.05 was considered statistically significant.

We thank Yoon Y and Kim MO for technical assistance.

This work was supported by a grant from the Radiological Translational Research Program (No. 50451–2015), the Korean Health Technology R&D Project, Ministry of Health & Welfare (No. HI14C1864), and the National R&D Program of the Korea Institute of Radiological and Medical Sciences, funded by the Ministry of Science, ICT & Future Planning (No. 1711021781).