Non-small-cell lung cancer (NSCLC), which accounts for approximately 85% of lung cancers, has been largely identified by oncogenic driver mutations with potential opportunities for targeted therapies [1, 2]. Recently, activation of the anaplastic lymphoma kinase (ALK) gene in lung cancer by fusion to echinoderm microtubule-associated protein-like 4 (EML4) or other gene partners (such as BIRC6 [3], TFG [4], KIF5B [5] and KLC1 [6]) has been identified as oncogenic events [7]. Clinical studies have shown that locally advanced or metastatic NSCLC patients harboring ALK gene rearrangement are highly sensitive to Crizotinib, which is a small molecular inhibitor of ALK tyrosine kinase [8, 9]. In addition, NSCLC with sensitive epidermal growth factor receptor (EGFR) mutations are well responded to tyrosine kinase inhibitors (TKI) and these patients will have a longer progression-free survival (PFS) than the patients whose tumors do not contain EGFR mutations [1, 10].

Approximately 60% of patients with NSCLC are diagnosed at a late stage for the first time [11]. These patients are not suitable for the resection of the primary tumor, and the only pathologic material guiding systemic therapy should be small biopsy or cytological specimens. Recent studies have demonstrated that cytological specimens, including fine-needle aspiration (FNA), fibreoptic bronchoscopic (FOB) and pleural effusion (PLE), are suitable for the molecular testing [12–16]. Although FISH (fluorescent in situ hybridization) is currently the gold standard method to detect ALK gene rearrangement approved by FDA, its application on cytological specimens remains a worth area of investigation. In this study, we investigate the use of ALK FISH and EGFR, KRAS mutational testing on cytological specimens and to evaluate PFS of the patients who received targeted therapies.

Table 1: Demographic and clinicopathologic features of the study patients 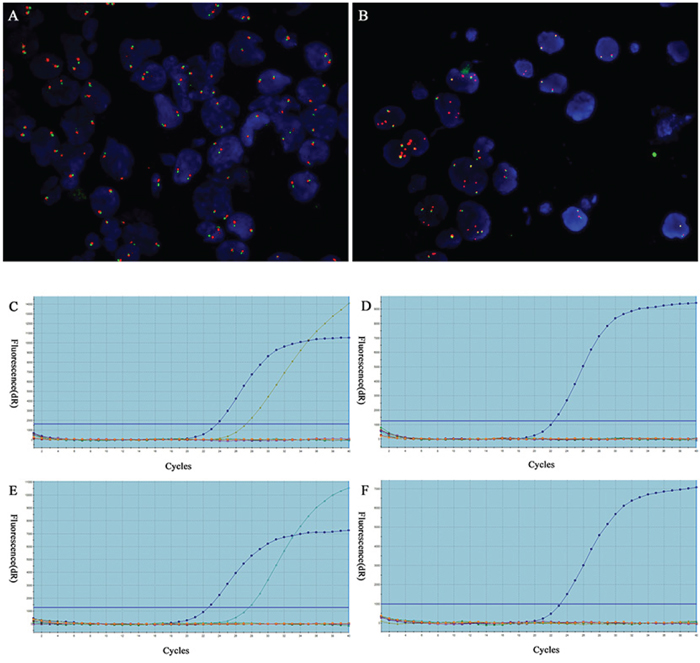 Of the 9 patients who received crizotinib treatment, there were 5 men and 4 women with mean age of 58.6 years (Table 3). The median follow-up duration was 9 months (range: 6–15 months). At the end of follow up, 8 (88.9%) patients were still receiving crizotinib treatment and there was one person stopping the treatment because of disease progression.

We performed targeted next-generation sequencing (NGS) in one case who did not response well to crizotinib treatment. Results confirmed the existence of EML4-ALK transloction, and the relative abundance of EML4-ALK fusion was 25.3%. In addition, there were a nonsense mutation (c.991 C > T, p.Q331) in exon 9 of P53 and a deletion of CDKN2A. The mutation in P53 could result in a stop codon and lead to loss of P53 function as a transcription factor. [17]

There were 22 patients with EGFR sensitive mutations who received gefitinib or erlotinib treatment. The median PFS was 16.0 months (95% confidence interval, 12.9 - 19.1) (Figure 2). Of them, 8 patients (36.4%) exhibited disease progression after 3 months due to acquired resistance to EGFR-TKI treatment. At the data cutoff point, 14 patients were still taking TKI treatment and tumor regression was observed in these patients. 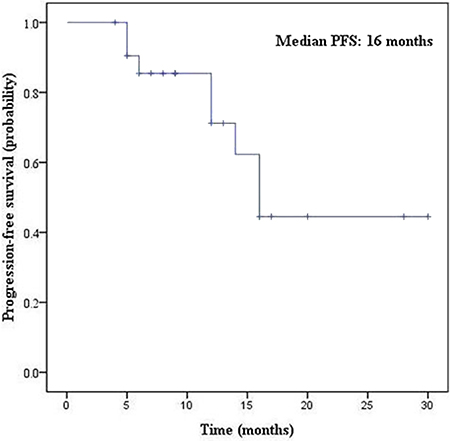 In summary, we conclude thatALK FISH and EGFR, KRAS mutational analysis on cytological specimens are sensitive methods for screening advanced stage NSCLC patients who are adequate for targeted treatment. Cytological specimens including FNA, FOB and PLE all provide feasible and effective material for the molecular analysis and further studies are required to validate the application in the routine molecular pathological diagnosis.

One hundred and thirty-seven patients with advanced NSCLC were enrolled in this study from September 2013 to June 2015. All these cytological samples, including FNA, FPB and PLE, were tested for ALK fusion by FISH and 134 were performed with EGFR and KRAS mutational testing because 3 samples were not adequate for DNA extraction. Imaging data were independently reviewed by authors to evaluate their treatment responses according to the Response Evaluation Criteria in Solid Tumors (RECIST) version 1.1. PFS was calculated from the date of initiating TKI treatment to a radiologic or clinical observation of disease progression. The study protocol was approved by the Institute Review Board of the Cancer Hospital, Chinese Academy of Medical Sciences (CAMS), Beijing, China. The methods were carried out in accordance with the approved guidelines. Each participant signed an Institutional Review Board approved informed consent in accordance with current guidelines.

The cytological specimen preparations were conducted according to a standard specimen processing protocol in our laboratory. The cases included FNA specimens obtained under image guidance with a cytopathologist present for adequacy assessment and pleural fluid specimens obtained by thoracentesis. The percentage of tumor cells more than 5% or over 500 tumor cells were used for DNA extraction and 100 tumor cells for ALK FISH analysis. The algorithm used for molecular testing in our study was depicted in Supplementary Figure S1. Each case had air-dried slides stained with Diff-Quik (DQ stain, Protocol Hema 3; Fisher Scientific, Kalamazoo, MI) and additional slides fixed in 95% alcohol for Papanicolaou staining. Fluid specimens also had a ThinPrep (Hologic, Marlborough, MA) slide prepared.

FISH analysis was conducted as previously described [28]. Briefly, FISH analysis was performed using the Vysis LSI ALK Dual color, Break Apart Rearrangement Probe (Abbott/Vysis, Abbott Park, IL, USA). Samples were considered to be FISH positive if more than 15% of the scored tumour cells had split one or both ALK 5’ and 3’ probe signals or had isolated 3’ signals. Slides were evaluated independently by two experts blind to the patient’s history and histological findings.

EGFR and KRAS mutational testing was conducted as previously described [29]. Briefly, mutational testing was performed using the HumanEGFR or KRAS Mutation Qualitative Detection Kit (Beijing ACCB Biotech Ltd., China), which applies quantitative real-time PCR (qRT-PCR) platform combining amplification refractory mutation system (ARMS) primers and TaqMan probes. The sensitive mutations were defined as p.G719S/C/A, p.L858R, p.L861Q and insertions in exon 19. The hotspot mutations in KRAS gene were within codon 12 and 13 including p.G12C/V/S/R/D/A and p.G13D. The assay was carried out according to the manufacturer’s protocol using the Stratagene Mx3000P real-time PCR system (Agilent technologies Inc, USA). Presence or absence of mutations was assessed from the fluorescence amplification curve.

For one patient who did not response well to crizotinib treatment, targeted next-generation sequencing was performed. Genomic DNA was profiled by using a capture-based targeted sequencing panel (Burning Rock Biotech, Guangzhou, People’s Republic of China). In brief, human genomic regions of 271 kb, including all exons in 56 genes and selected introns in ALK, RET and ROS1 for the detection of translocation events, were captured by using 120-bp probes and were sequenced (Supplementary Table S4). The concentration of the DNA samples was measured with the Qubit dsDNA assay. Fragments of 200 to 400-bp sizes were selected with beads (Agencourt AMPure XP kit; Beckman-Coulter, Brea, CA), followed by hybridization with the capture probes baits, hybrid selection with magnetic beads, and PCR amplification. A bioanalyzer high-sensitivity DNA assay was then used to assess the quality and size range. Available indexed samples were then sequenced on a Nextseq (Illumina, San Diego, CA) with pair-end reads. Sequence data were analyzed by GATK 3.2 (https://www.broadinstitute.org/gatk/) and DNA translocation analysis was performed by using both Tophat2 (https://ccb.jhu.edu/software/tophat/index.shtml) and Factera 1.4.3 ((http://factera.stanford.edu) [30].

This work was supported by a grant from Youth Backbone Program (to Jianming Ying) of Cancer Hospital, CAMS, Beijing, China).